Connah’s Quay Nomads played out a 0-0 draw with Caernarfon Town at the Oval in the JD Welsh Premier League on Friday evening.

The game was Nomads’ first competitive fixture at Caernarfon’s Oval ground for almost 10 years, having won 2-0 there in a December 2008 league encounter.

Andy Morrison’s side were looking to bounce back after the previous week’s result, having lost their first fixture in eight in a 3-0 defeat to TNS at Park Hall, broadcast live on Sgorio.

Despite the defeat, just one point separated Nomads and the top spot, and they knew a win at Caernarfon would send them into first place for at least Friday evening.

Andy Morrison made no changes from Connah’s Quay’s last outing, as the towering Andy Owens was forward for Nomads with support from Ryan Wignall on the left wing.

Caernarfon, who had beaten Nomads 1-0 at Deeside in early September, started Sion Bradley, Ross Stephens, and ex-Nomad Jamie Crowther but were without the suspended Noah Edwards, who joined the Cofis following a spell in Europe with Connah’s Quay.

The game began and Nomads were soon going forward, with Ryan Wignall beating defender Joe Williams and running into the area to square the ball just a yard from the goal line, where Caernarfon cleared, on three minutes.

A minute later, Danny Holmes nearly sent a Rob Hughes corner in, shooting just wide from around seven yards out.

Nomads were enjoying a lot of possession in the Caernarfon half, but the Cofis did get at the Nomads’ end on in the 14th minute when they forced two consecutive corner balls which were cleared by Connah’s Quay.

After another threatening run from Ryan Wignall, Darren Thomas broke into the Nomads half and forced John Danby into a low save near his left post in the 18th.

With play building up positively, Nomads were looking to capitalise and score, seeing a good chance go amiss after 30 minutes, when Morris, Wignall, and Wilson countered a Caernarfon corner.

But when Wilson received the ball from Morris with two defenders to beat, he was tackled before he could find the awaiting Wignall in the area.

Despite continuing to control the game, the Nomads were forced to settle with a goalless scoreline at the interval.

They enjoyed a bright start when play recommenced, winning a corner and then seeing Callum Morris rush into the Caernarfon area only to have a low shot saved well from eight yards by goalkeeper Alex Ramsey.

In the 52nd minute, they saw another good opportunity to score when Rob Hughes beat his man, ran down the wing and sent a great cross to Andy Owens, which was intercepted just before he could send it towards the bottom left corner.

As the Nomads continued to mount pressure on the home goal, Andy Morrison made a double substitution, replacing Rob Hughes and Andy Owens with Michael Wilde and Michael Bakare.

Just before the hour mark, Laurence Wilson sent a low effort from 15 yards just wide of the right post to continue Nomads’ intense search for an opening goal.

On 65 minutes the game had an end to end feel, with a Nomads corner won by Bakare countered by Caernarfon, who then won a corner themselves.

On 75 minutes, Jay Owen sent a defence splitting pass to Callum Morris, who was on through on goal but had his shot just saved by the goalkeeper in a close range chance for Nomads.

Connah’s Quay were then a dealt a blow, when Ryan Wignall, who had been a constant danger on the wing, was shown a second yellow and subsequent red card for kicking the ball away.

The ten men Nomads were then left to try and break the deadlock with the final stages approaching. They attacked via Poole, who crossed to Wilde, whose header glanced across the Caernarfon goal mouth before going out.

In the 83rd minute, Callum Morris again had a shot saved by Ramsey with time beginning to run out at the Oval ground.

On 87 minutes, Laurence Wilson made a surging run down the wing and into the Caernarfon area, but was tackled before he could deliver the ball into the six yard box where Nomads had men waiting.

In three additional minutes of injury time, both sides were awarded a free kick but neither conjured a late winner, with referee Rob Jenkins’ whistle confirming a 0-0 draw at full time.

The result keeps Nomads second in the JD Welsh Premier League as they turn their attentions to the Nathaniel MG Cup, facing Bala Town in the quarter finals next week.

The cup tie takes place at Maes Tegid on Tuesday 30 October for a 7:45pm kick off. 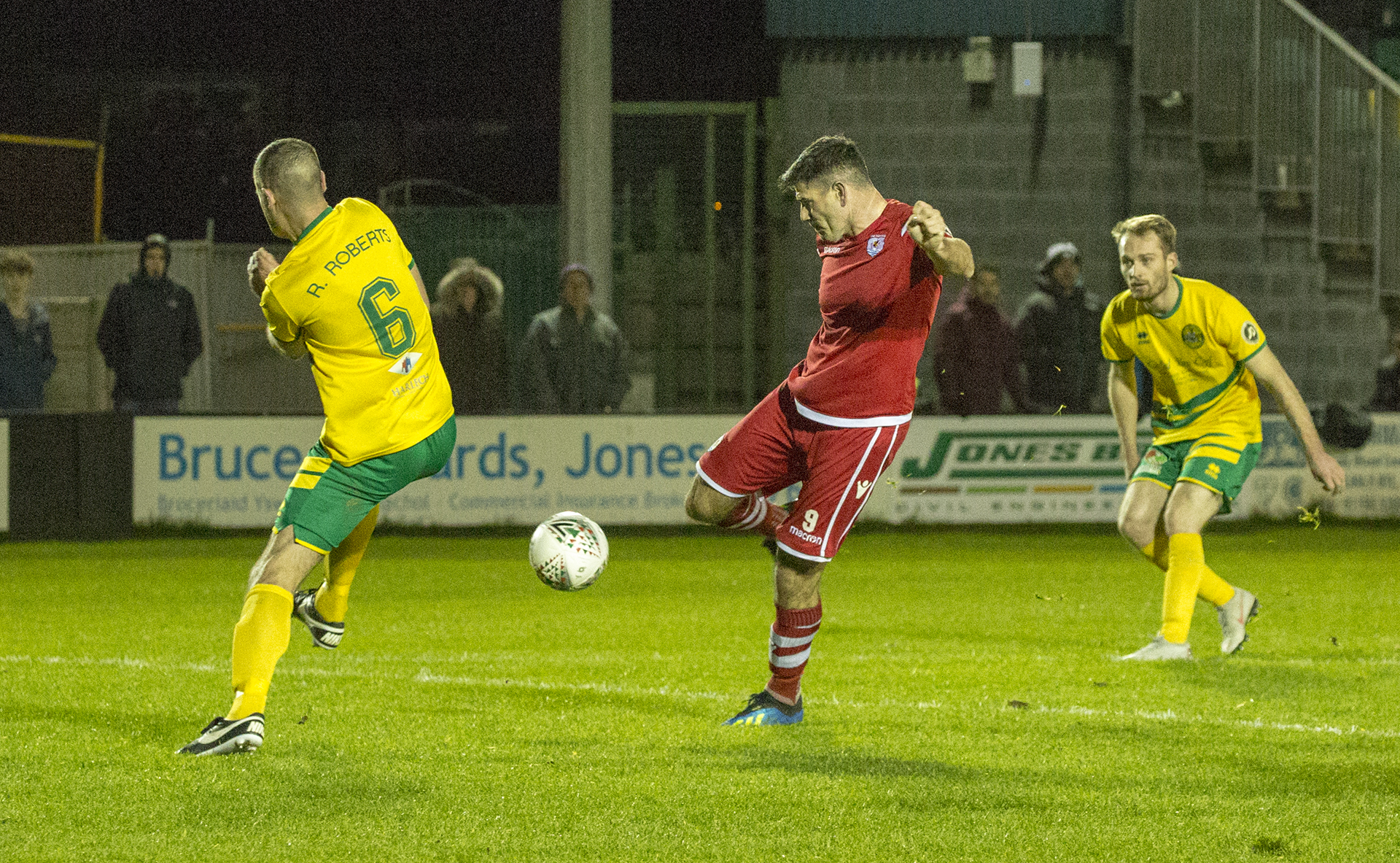 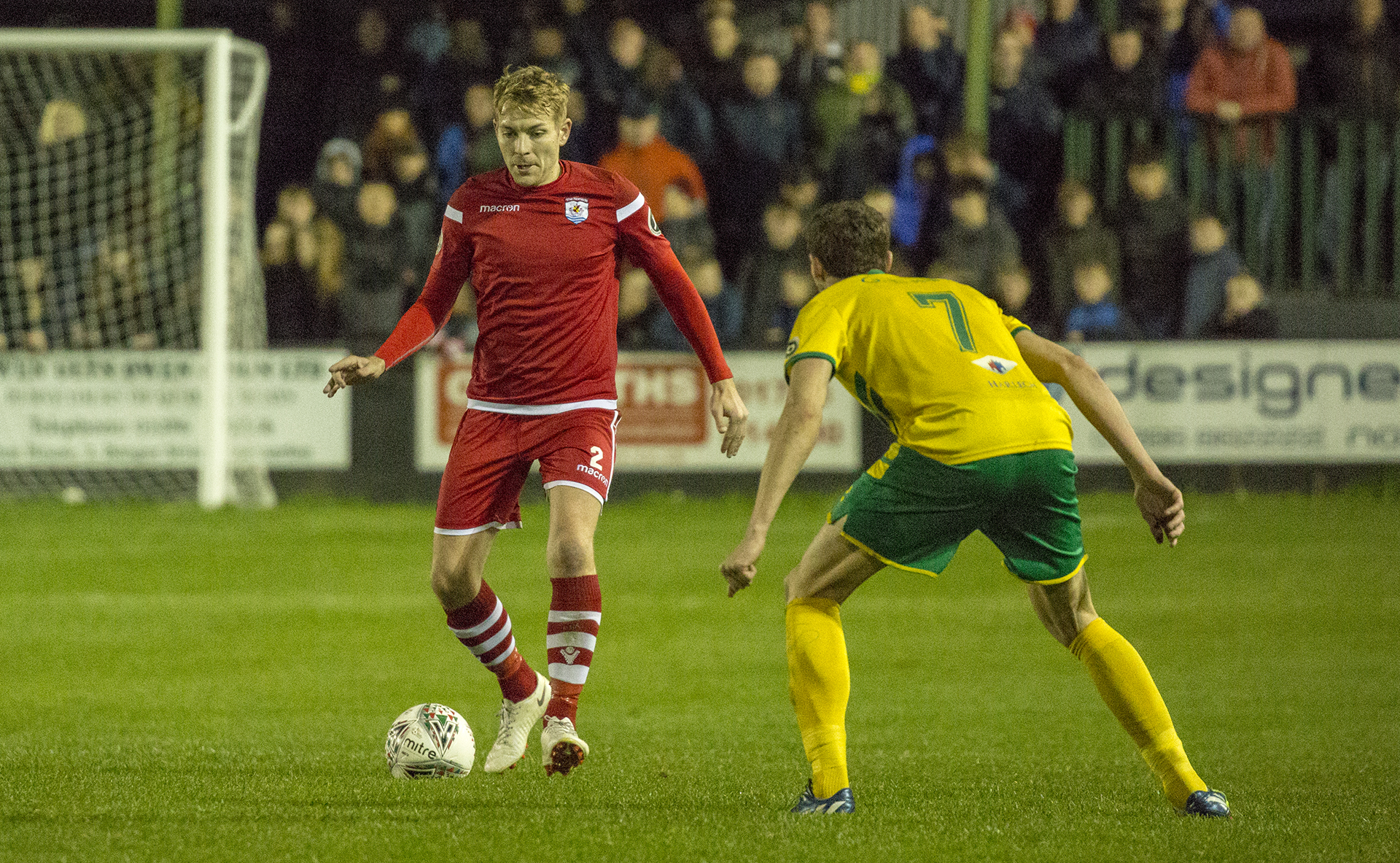 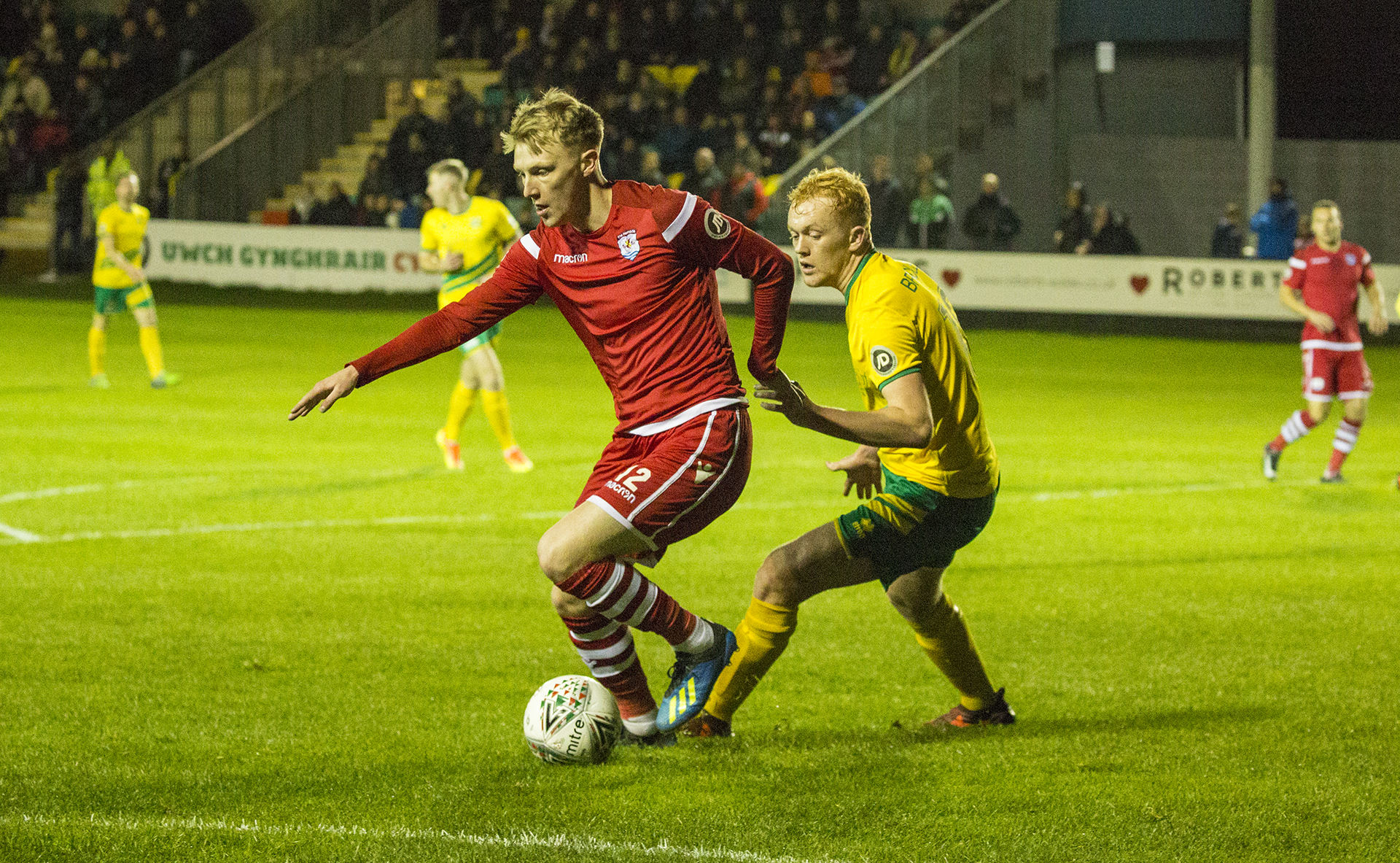 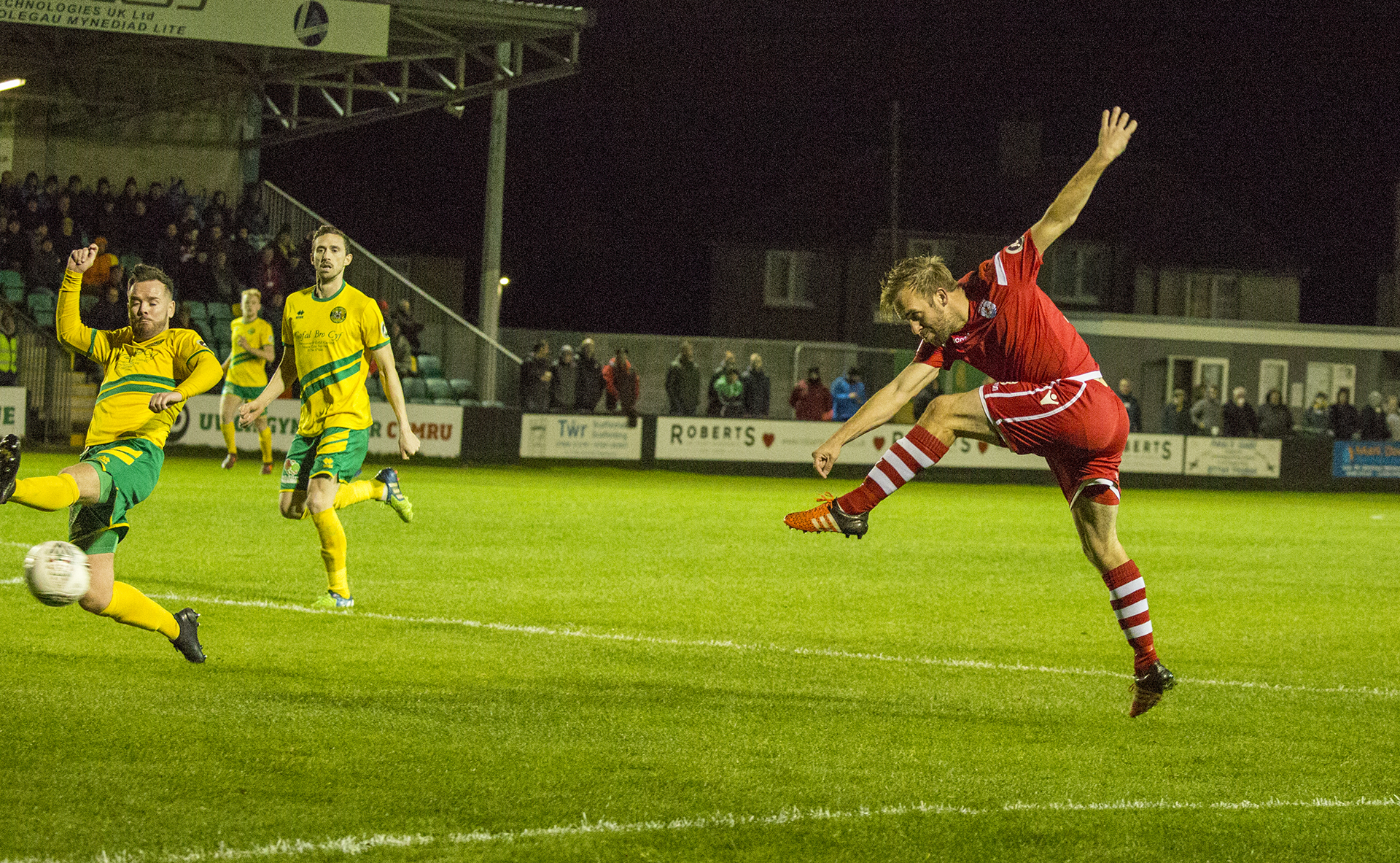 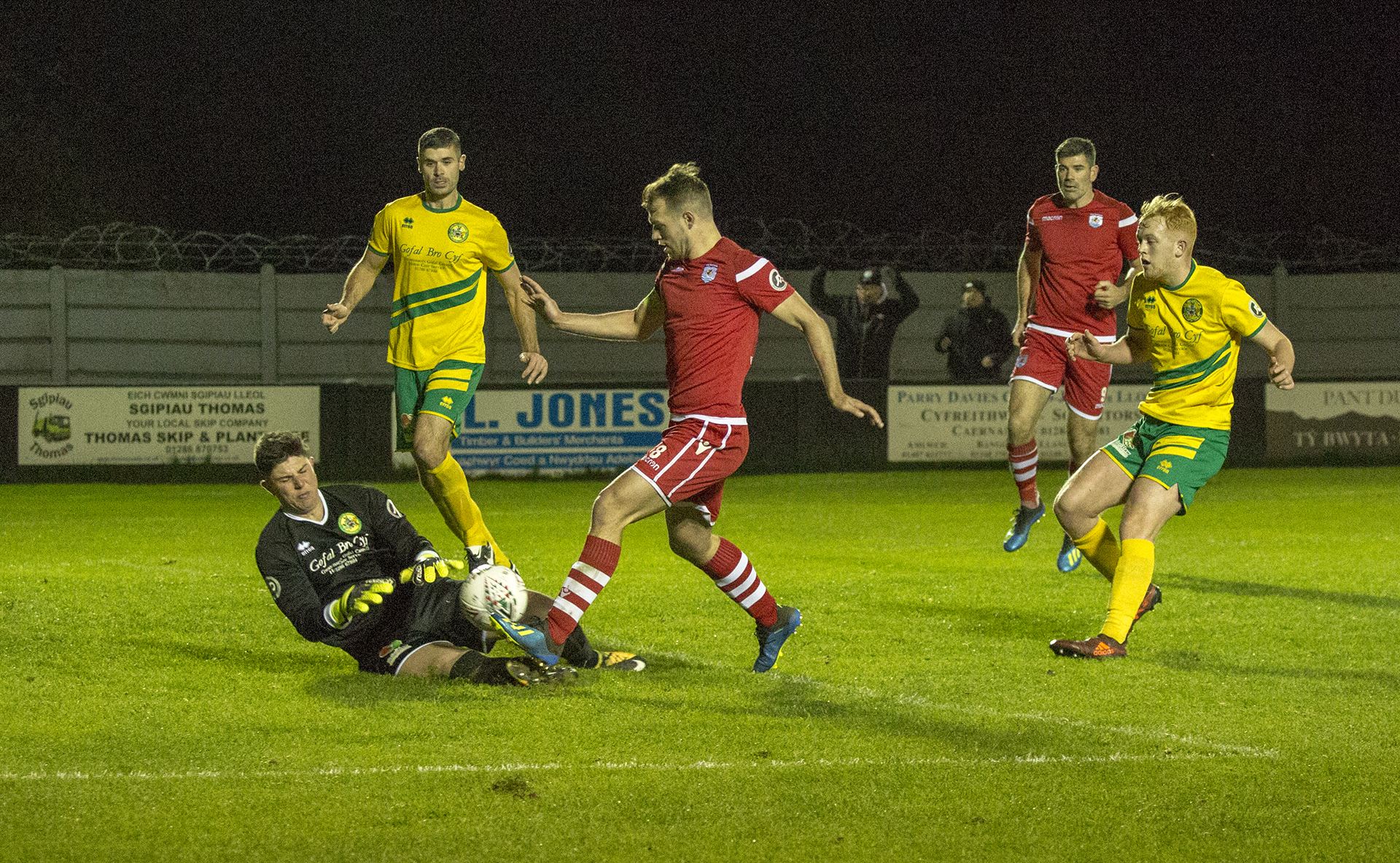