Christmas Number One for Nomads with Met victory

Connah’s Quay Nomads will spend Christmas Day at the top of the JD Welsh Premier League following a 6-1 victory over Cardiff Met.

The Nomads came into the festive fixture knowing a win would guarantee them first place in the JD Welsh Premier for Christmas Day, whilst Cardiff Met were gunning for three points as they eyed a last push for the top six.

Connah’s Quay came into the game following a 2-1 win over Cefn Druids which had kept them top of the league by just one point. Cardiff Met visited Deeside in rich form, having gone four games unbeaten, a run that started in a 1-0 win over The Nomads in the Nathaniel MG Cup semi final in November.

Cardiff Met manager Christian Edwards announced a side including captain Bradley Woolridge, Eliot Evans and Adam Roscrow, who scored the winning goal in his last outing at Deeside.

The Nomads faithful had to wait only 50 seconds for the first goal of the afternoon, which came after a Laurence Wilson ball was passed to Bakare on the left side of the area, where he held the ball up before finishing low into the bottom right corner from eight yards out.

The Nomads proceeded to win a number of set pieces in the Cardiff Met half, with Andy Owens’ long throw ins targeting the area.  In the sixth minute, Owens’ throw reached Michael Parker who put the ball in the net, but a foul on keeper Max Manson ruled out the goal.

The hosts’ attacking style continued in the 12th minute, when George Horan saw a header cleared close to the goal line from a corner. Cardiff Met did have their chances, but The Nomads' defence nulified their attacks with John Disney making an excellent block to stop a counter attack in the 17th minute.

The Nomads’ second goal came in style, as some slick passing signalled the start of Wilde’s hat trick.  Ryan Wignall received the ball on the left wing, and flicked it between two Met defenders to Bakare, who ran down the byline to pass perfectly to Wilde, who slotted the ball in at close range in the 25th minute.

Cardiff Met keeper Manson’s game then came to a premature end, as he was forced off with an injury after 30 minutes, to be replaced by substitute goalkeeper Esa Aalto.

Andy Owens consolidated The Nomads’ dominant first half so far with a lob of Aalto to get on the scoresheet and make it 3-0 on 27 minutes. After a chipped through ball from Bakare, he hit the ball on a half volley to send the ball over the 'keeper and into the net.

But The Nomads’ clean sheet was scuppered before the break, when a quick passing move from Cardiff Met allowed substitute Will Evans to head in from around six yards out to keep Met in the game.

Michael Wilde replied to Met’s goal by securing his brace on 41 minutes, sending the ball in from around six yards after Andy Owens had put a Wignall cross against the post.

The Nomads went in at half time enthused with an excellent performance which could have seen even more goals, with Bakare having an effort saved by Aalto after going one-on-one against the 'keeper in the 45th minute.

Bakare shot low towards the bottom right corner, but Aalto’s left knee got to the shot and did enough to send it around the post.

Andy Morrison’s side wasted little time after the restart, with Ryan Wignall making it 5-1 on 49 minutes. He met a Bakare cross with a wicked volley from around 10 yards out, sending the ball past Aalto.

The second half reflected much of the first, with The Nomads' set pieces proving effective in the Met half, whilst the visitors struggled for sustained possession inside The Nomads' end.

After the hour mark, The Nomads’ constant runs from the likes of Wignall and Bakare, backed up by the professionalism of their defence, had firmly placed Connah’s Quay in control of the encounter.

Andy Morrison then made his first change, replacing Callum Morris with Jonny Spittle, with Bakare subbed off for Rob Hughes in the 67th minute.

In the 75th and 76th minute Nomads were showing no signs of slowing down, winning two consecutive corner balls which couldn’t be converted by the waves of attacking red shirts.

And they achieved just that, when Michael Wilde headed an Andy Owens cross in from close range to confirm his hat trick, and cap off an early Christmas present for the home crowd as they watched The Nomads confirm their place at the top of the league.

The Nomads now turn their attentions to their Christmas double header against Bala Town, which sees them travel to Maes Tegid on Boxing Day before welcoming the Lakesiders to Deeside on New Year’s Day. Both games kick off at 2:30pm. 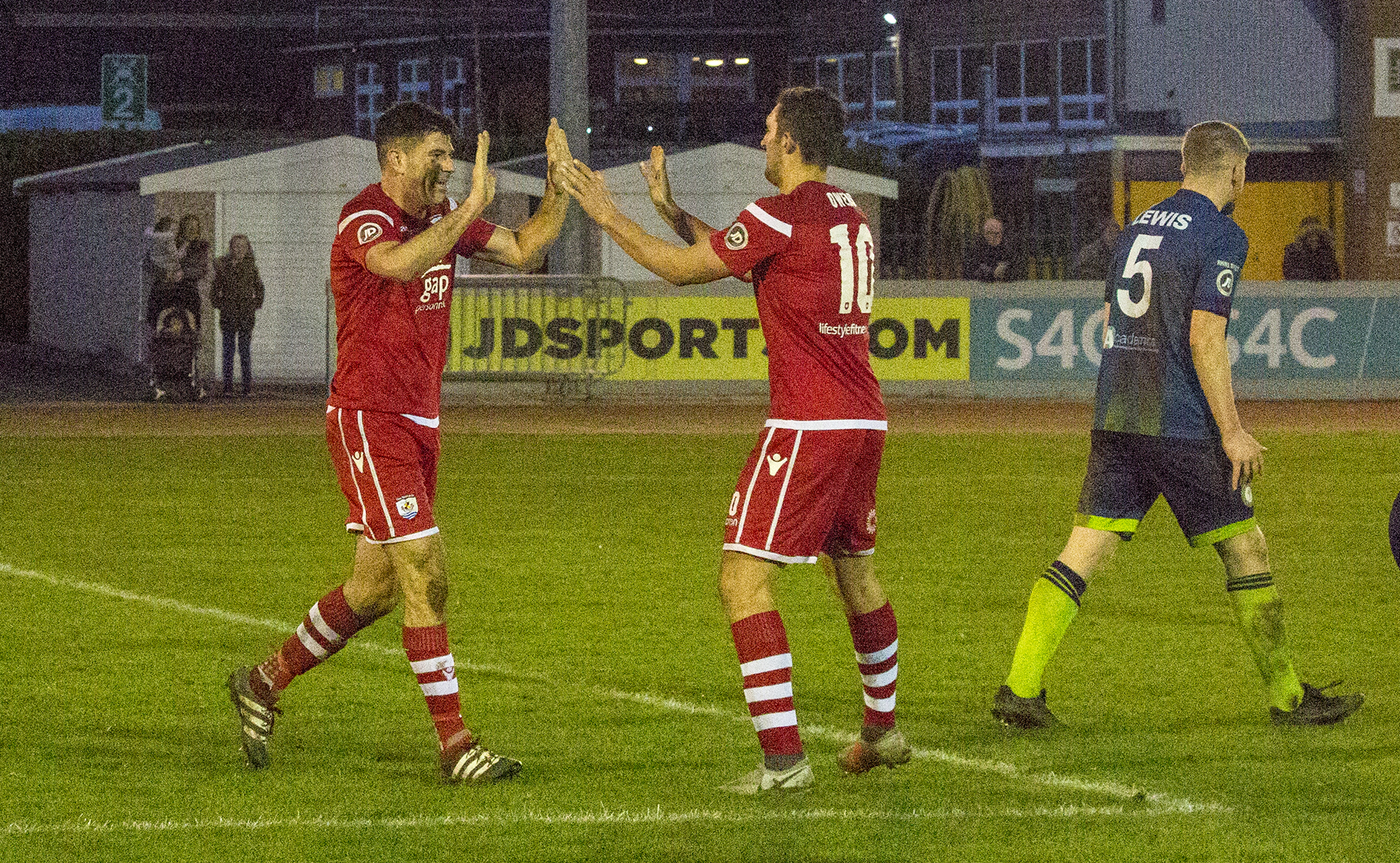 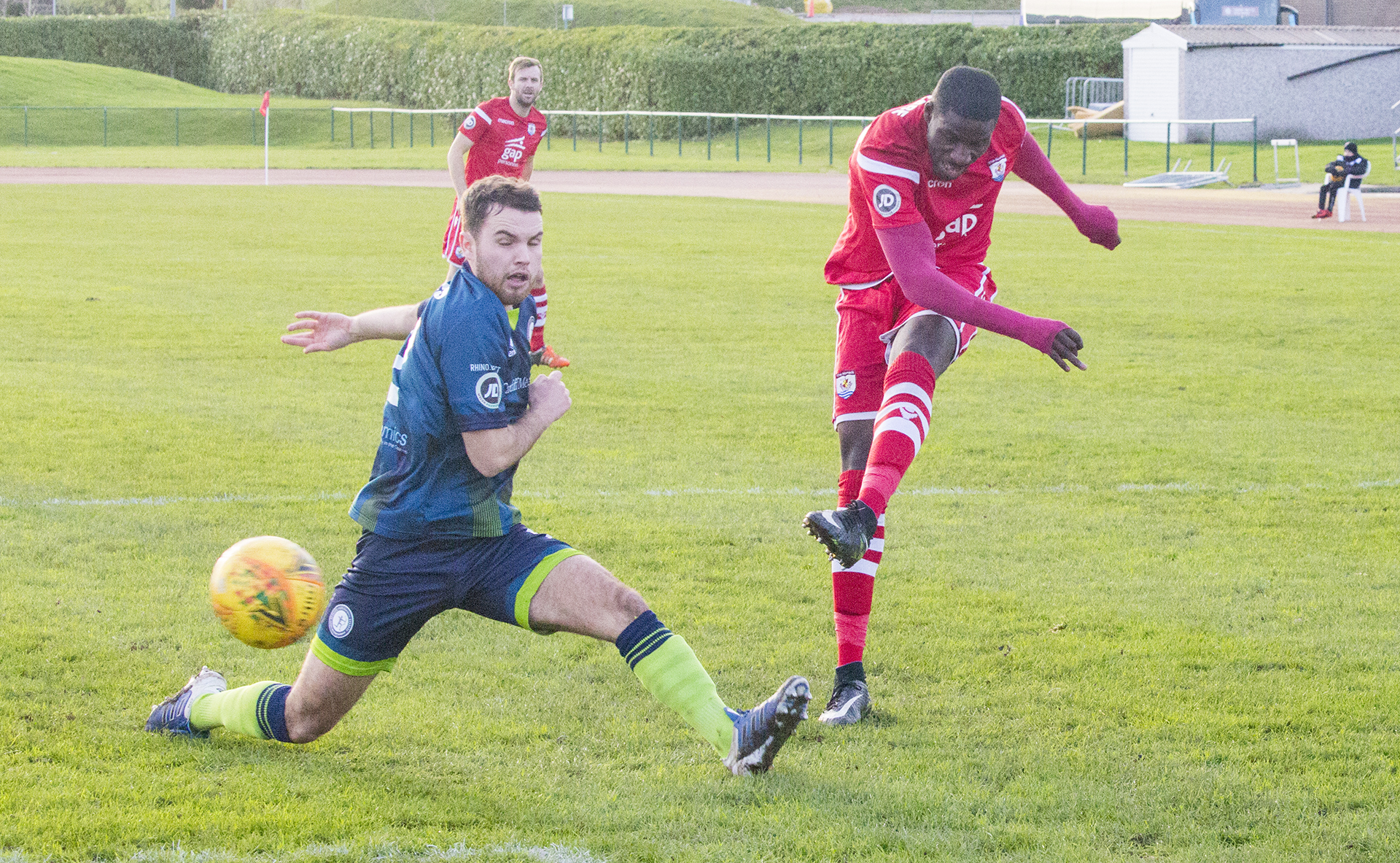 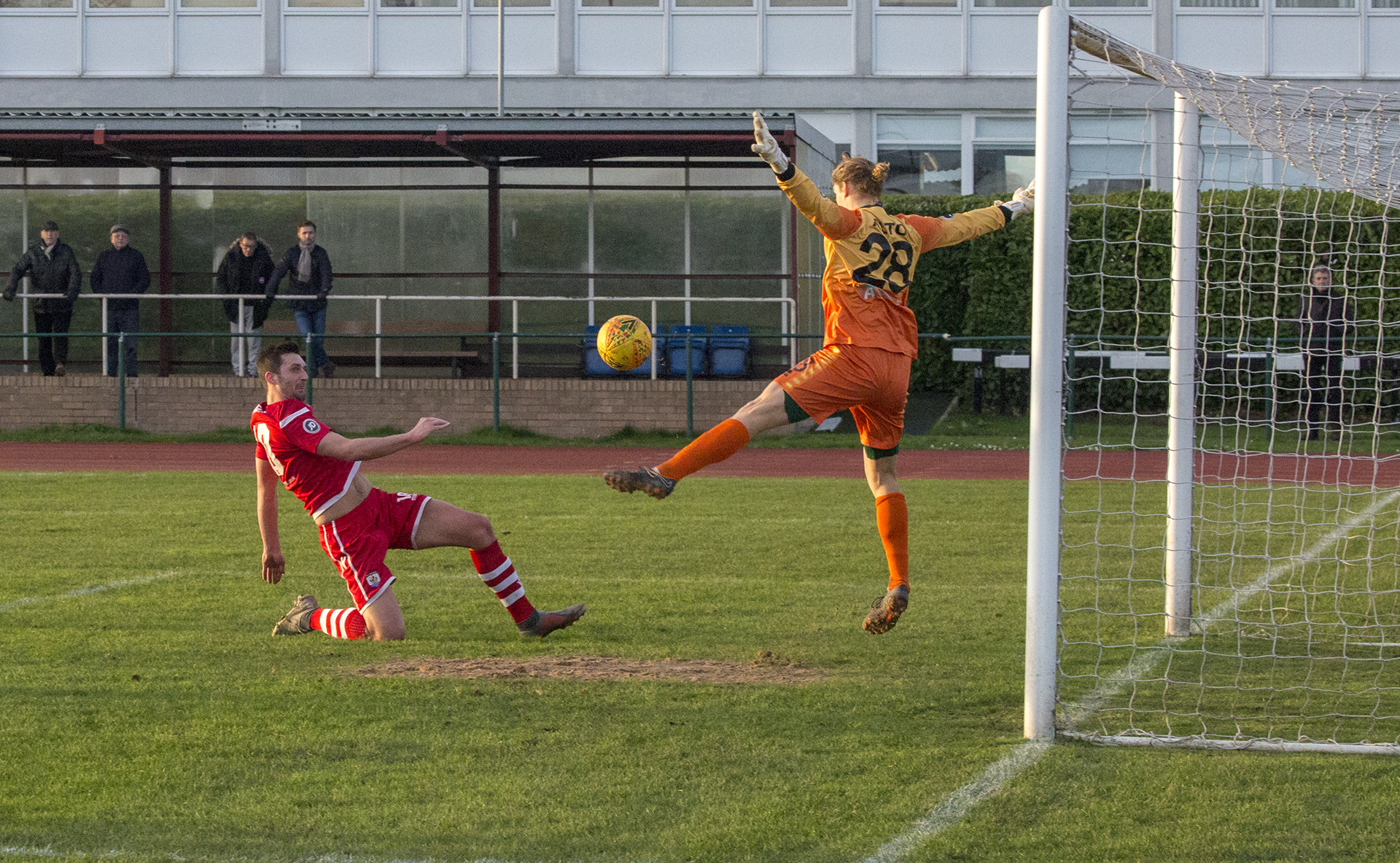 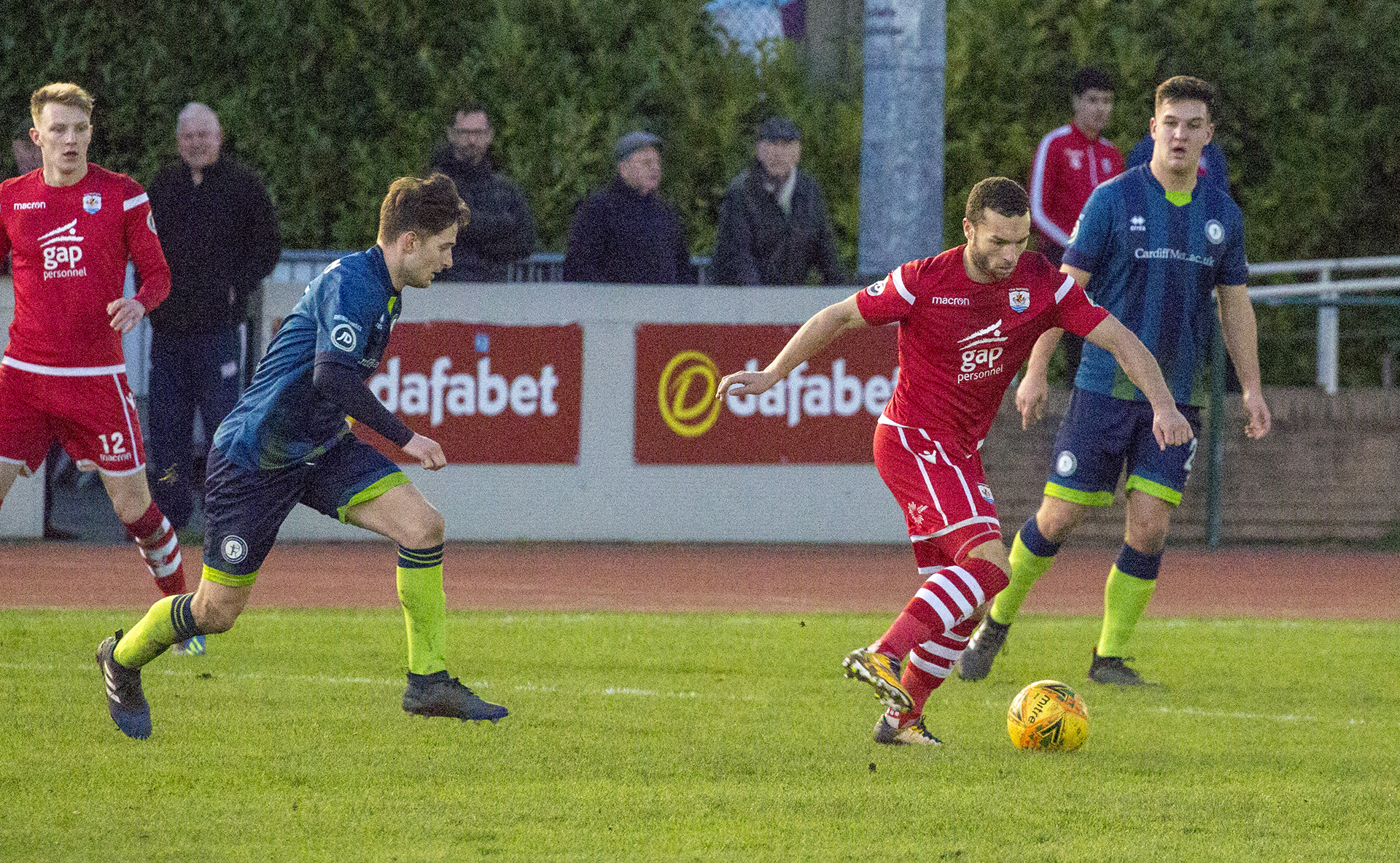 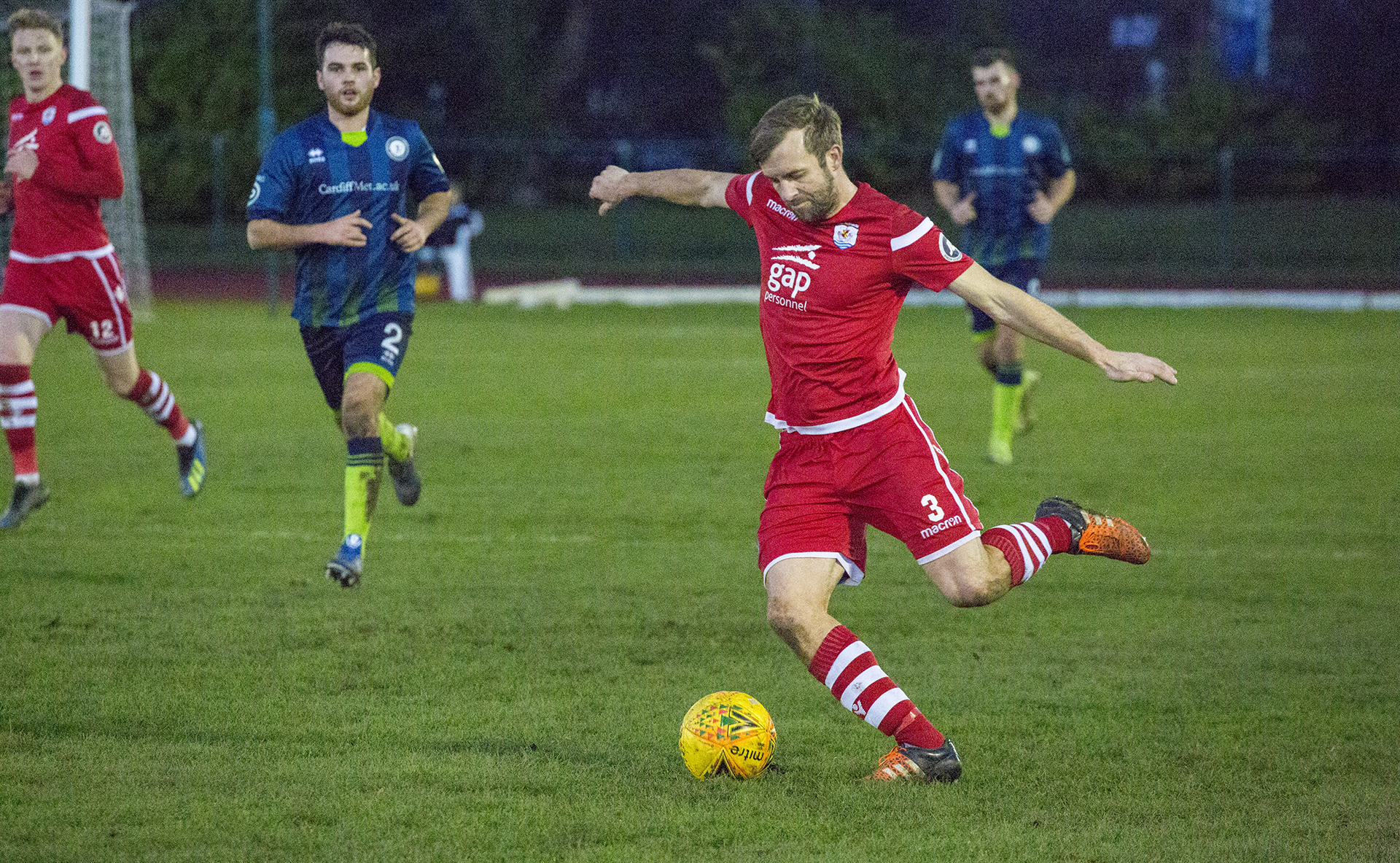