Connah's Quay Nomads came out on top of an eight-goal game against Caernarfon Town in the JD Welsh Premier League on Friday evening.

Four goals in the first 32 minutes gave Nomads a 3-1 lead at half time, with a 55th minute Cai Jones goal making for a tight encounter until goals from Adam Barton, Michael Wilde, and Michael Bakare clinched victory for Nomads in a dramatic evening at Deeside.

The game marked Nomads' first home fixture in five weeks, and their first of phase two. They came into the Friday night clash in good form, having come back from 0-1 down to beat Newtown AFC 2-1 at Latham Park last Saturday.

New signing Adam Barton retained his place in the line up after making his debut in that game, with defender Priestley Farquharson handed his debut by Andy Morrison after receiving international clearance in the week.

Caernarfon, who held Nomads in phase one with a 0-1 defeat and goalless draw, started the likes of club captain Nathan Craig, ex-Nomad Jamie Crowther, and forward Jamie Breese.

The game began in the wet and windy conditions of Storm Erik, with Nomads battling against the wind in the first half.

After attacks from Nomads led by the long throw ins of Jake Phillips, the deadlock was broken after just nine minutes by Callum Morris.

From a Michael Bakare cross, he sent a powerful effort past goalkeeper Alex Ramsey into the bottom right corner of the net from the edge of the area.

Despite Nomads taking the lead, the affair remained even, with Caernarfon remaining in the game as they looked for an equaliser through the likes of Jamie Breese, who scored the winning goal in the Cofi's last visit to Deeside.

And they found the equaliser on 23 minutes, when referee Rob Jenkins pointed to the penalty spot after a challenge in the area from Adam Barton. Nathan Craig stepped up, and made no mistake in bringing the game level at 1-1.

But that scoreline lasted for just six minutes, as Nomads won a penalty kick of their own on 29 minutes after Michael Wilde was tripped up in the six yard box.

And on 32 minutes, the third penalty of the night was awarded when Michael Bakare caused problems in the Caernarfon area on a skilful run, beating multiple defenders, which resulted in the referee giving a handball against the Cofi defence.

It once again fell to Callum Morris to take the penalty kick, and he did just that with another neat conversion to seal his hat trick.

With five minutes of the first half remaining, the game's intensity showed no signs of slowing down as Caernarfon rushed to get back into the encounter. They went close on 43 minutes, when a low cross went glancing across the Nomads' six yard box to be sent just wide of the left post.

The Nomads did enough to hold onto their lead at the break, as they looked to take control of the game and stay top of the JD Welsh Premier League.

The second half got underway, and after an even start with few major chances, Caernarfon's Cai Jones burst into the Nomads' area to make it 3-2. After they broke into the Nomads' half, Jones received the ball and struck from around 20 yards out to beat keeper John Danby.

Boosted by their goal, Caernarfon enjoyed a strong period as they attacked the Nomads' end in their search to equalise once again. In the 65th minute Danny Holmes made a vital interception to stop Gareth Evans running at goal, before the Cofis won a corner which was cleared.

Nomads found their much needed fourth goal through Dundee United loanee Adam Barton who opened his account at the club on 71 minutes. After a cross from Phillips, the ball bounded up for him to volley home from five yards.

As the game entered the final ten minutes its tempo reached fever pitch, with a late goal rush confirming a Connah's Quay win.

Michael Wilde got on the scoresheet in the 82nd, when after a low cross from Danny Holmes, he fired home at close range.

One minute later it was then the turn of Michael Bakare, who scored perhaps the best goal of the night on when he darted into the area, beat his man, and curled a deft finish in from around 15 yards out.

Nomads were then dealt a late blow, as they were reduced to 10 men with less than five minutes of normal time to play, as George Horan was dismissed for a handball which denied Caernarfon a run at goal.

After three additional minutes of injury time, Connah's Quay's win was confirmed after an action packed evening at the Deeside Stadium. The result gives Nomads a two point lead at the top of the JD Welsh Premier above second-placed The New Saints.

They now turn their attentions to Irn Bru Cup, as they entertain Scottish League Two side Edinburgh City in the semi final at Deeside next Saturday 16 February for a 7:25pm kick off. 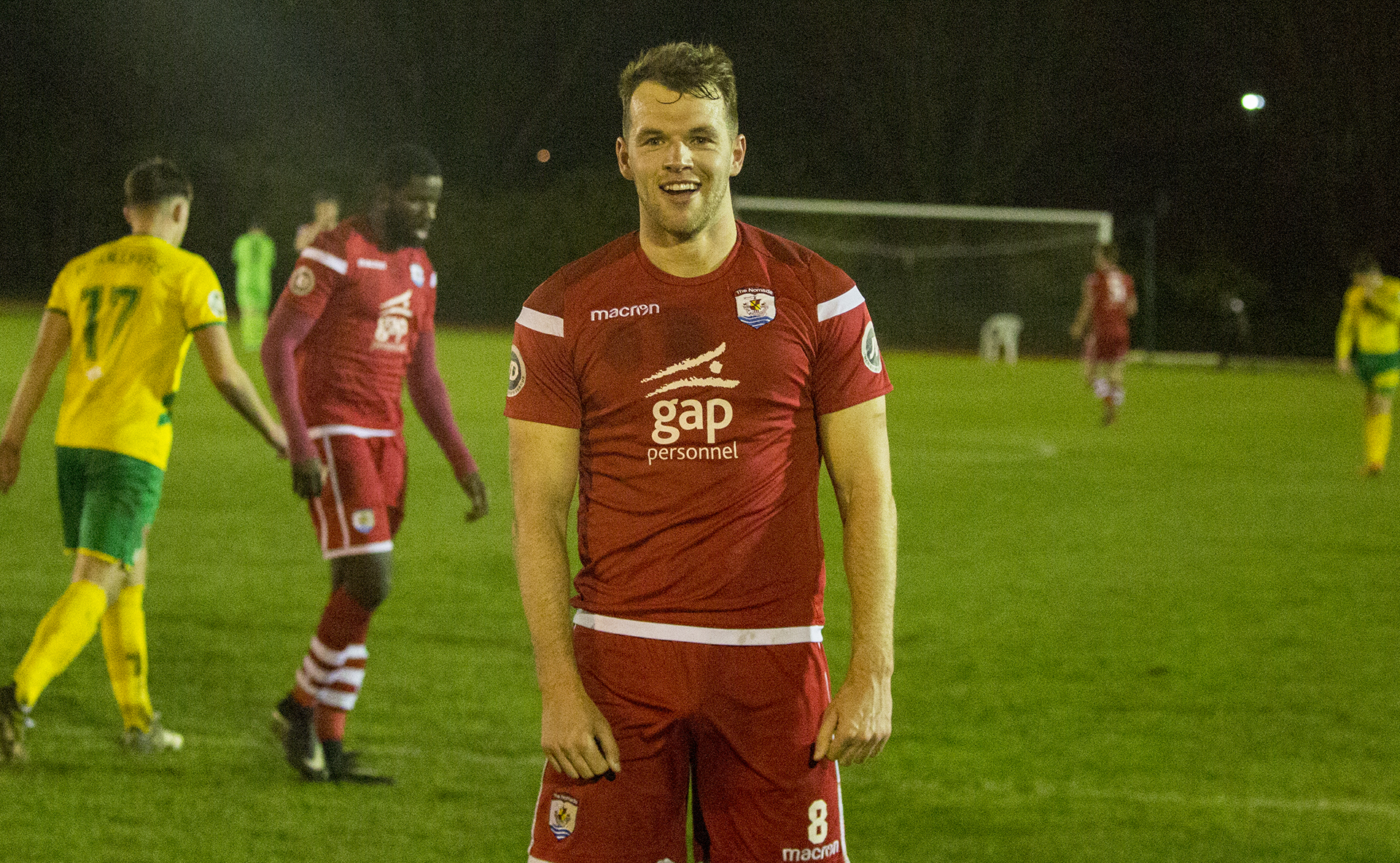 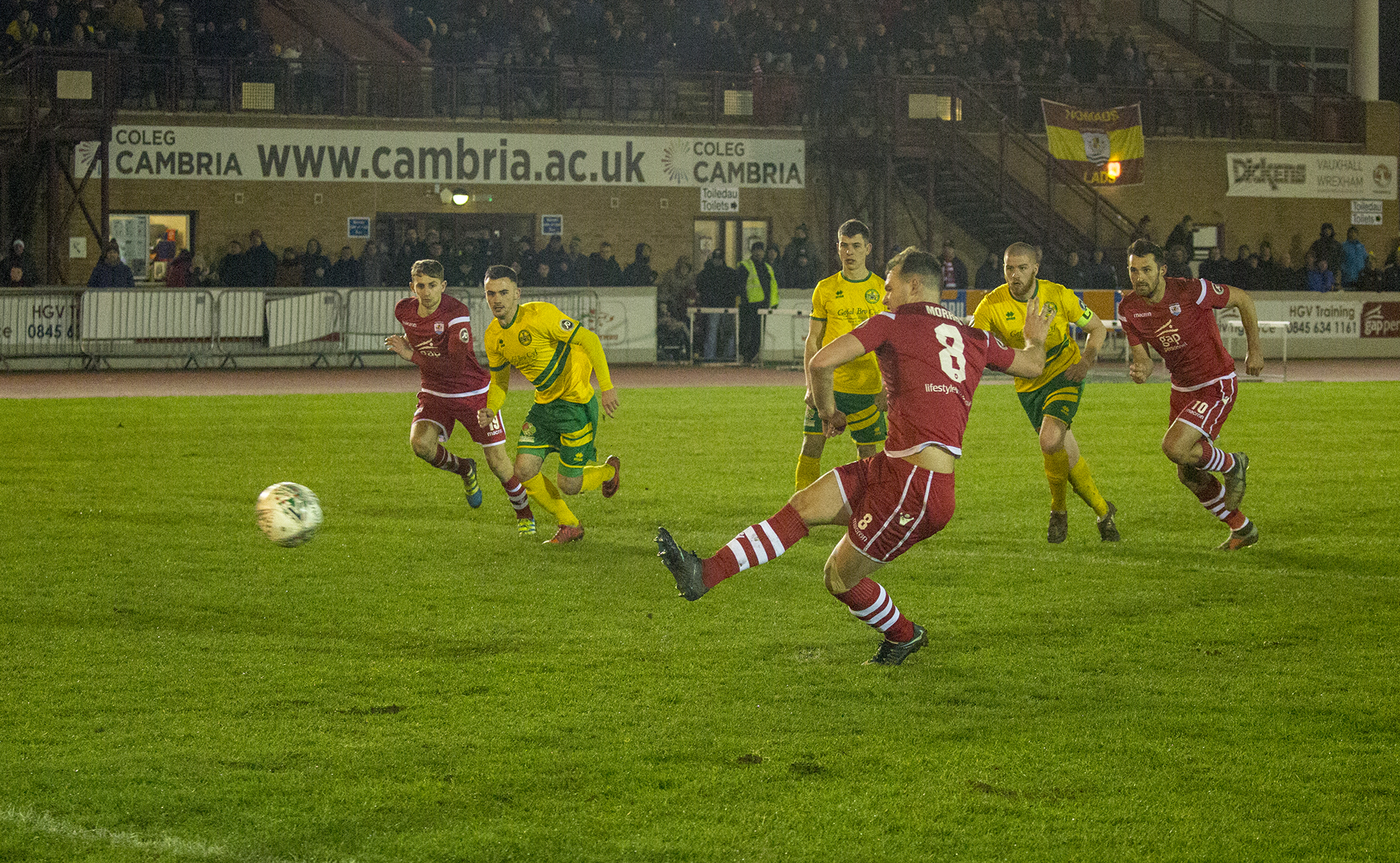 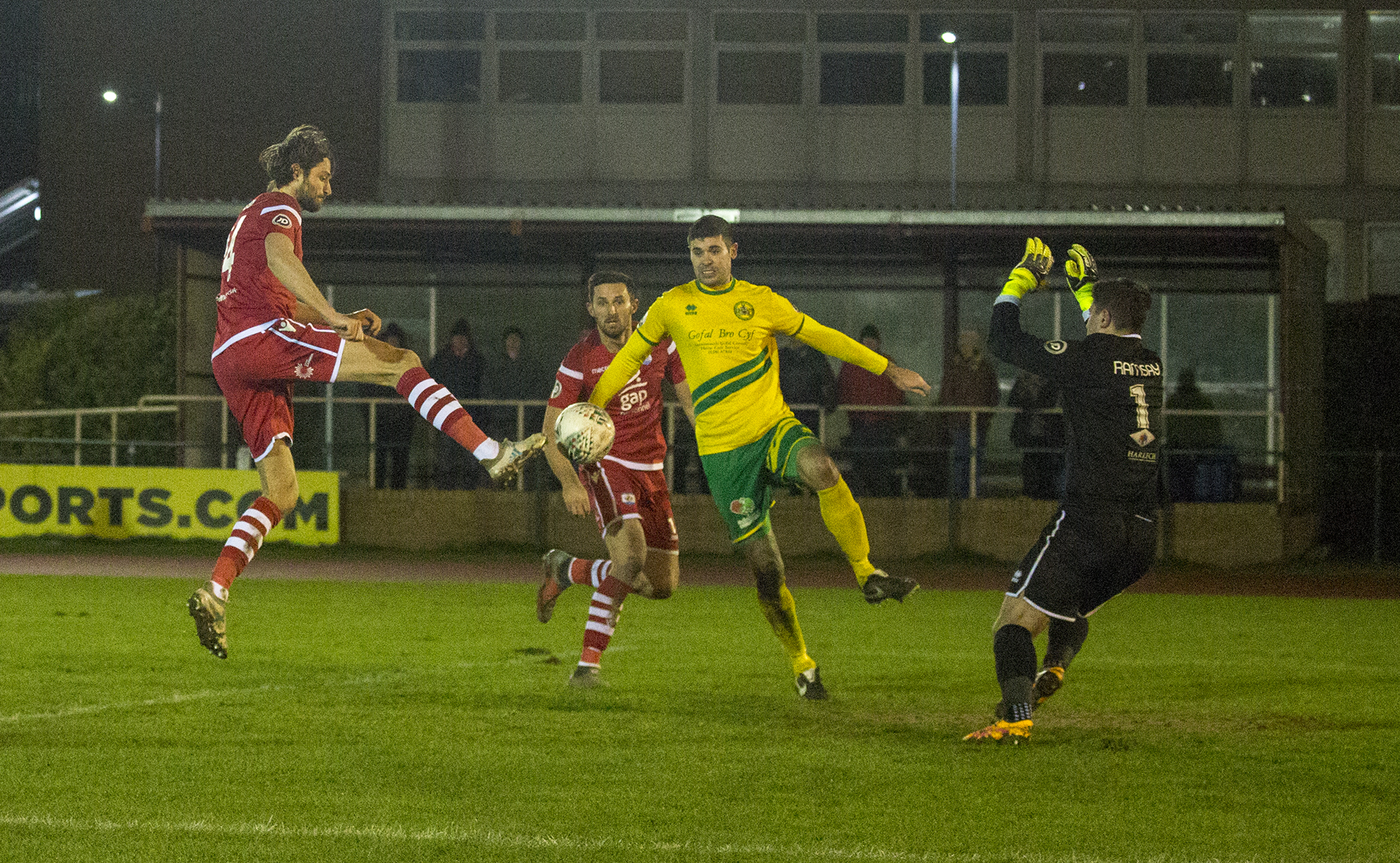 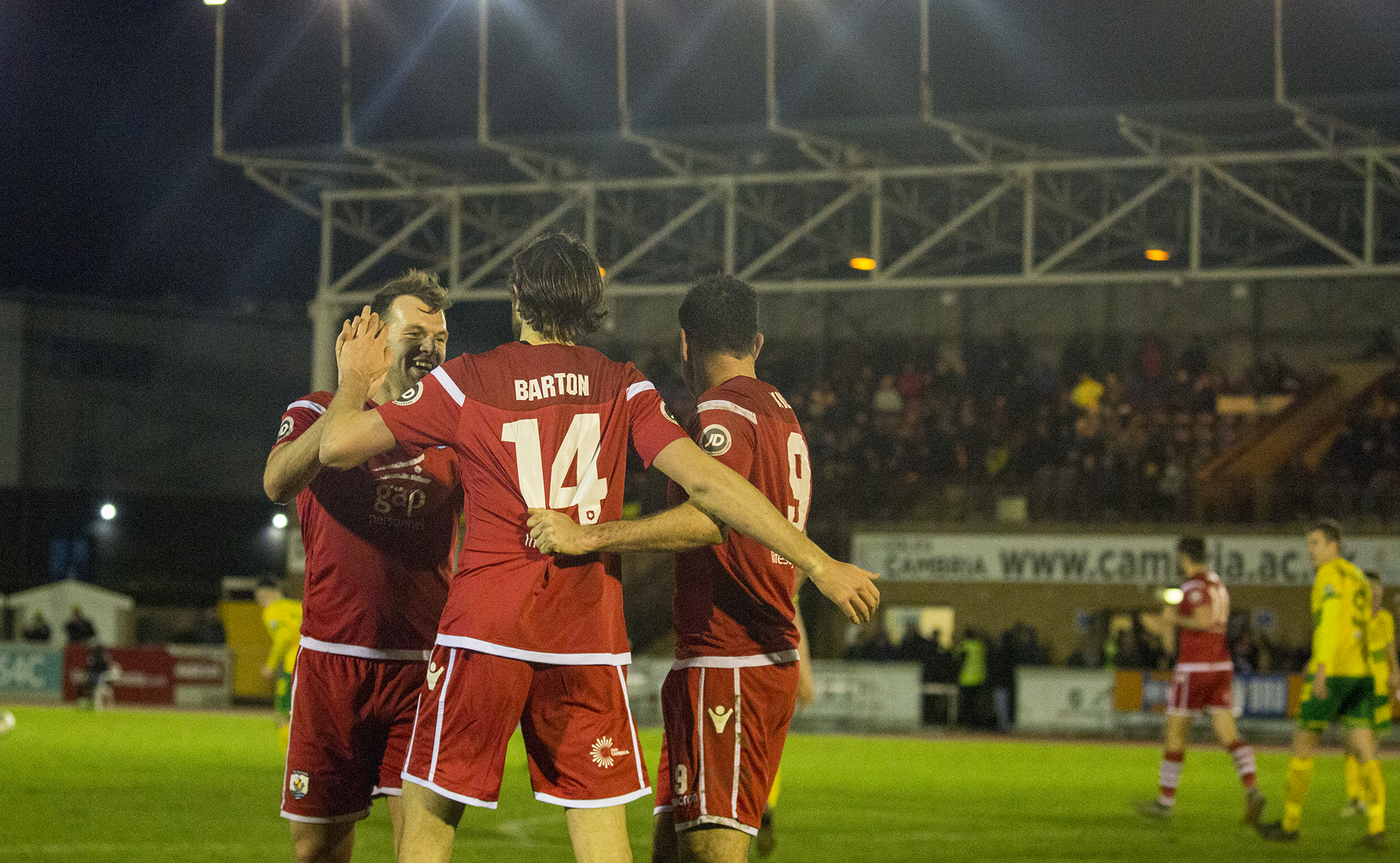 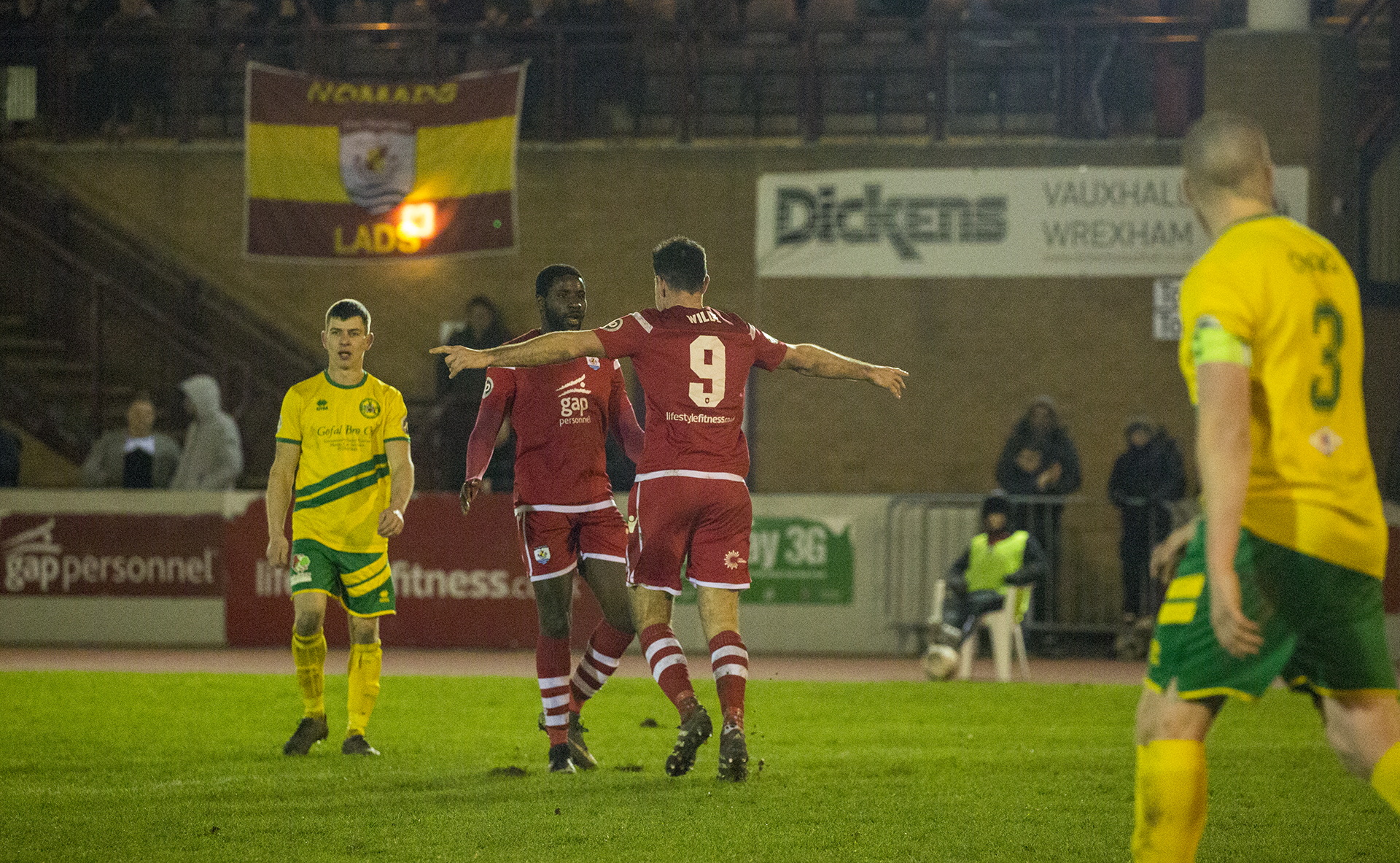