Nomads lose out in top of the table clash

Connah's Quay Nomads lost out by two goals to nil against The New Saints when the first and second placed JD Welsh Premier League sides went head to head on Saturday evening.

Despite regularly matching up to the current league champions, goals from Aeron Edwards and Ryan Brobbel in the first and second half respectively gave all three points to TNS.

The game was billed as the biggest of the JD Welsh Premier League season so far, as the table-topping Connah's Quay took on the second placed, and current league champions, The New Saints.

Both sides came into the game knowing a victory would have significant bearings on the title race, and were enjoying similarly strong form. In the previous week, the two sides booked their place in the JD Welsh Cup finals with TNS defeating Llandudno 8-1, and Nomads seeing off Caernarfon Town by two goals to one.

Nomads were unbeaten in four league games going into the live Sgorio game, and had enjoyed a week of relative rest having played three games against Barry, Bala and Caernarfon in the space of six days at the end of February.

TNS came to Deeside looking to re-establish themselves at the top of the table, with Nomads' defence coming up against a side that had score more than 20 goals in their past five games in all competitions.

Andy Morrison made two changes from his Welsh Cup quarter final side, with John Disney and Andy Owens replacing Priestley Farquharson and Jay Owen. Rob Hughes retained his place in the line up after an excellent individual performance at The Oval.

The game began with Nomads on the front foot, with Michael Bakare running down the left wing to send a cross to Owens, who had a close range header saved by Harrison in the 1st minute.

In the 6th minute, Nomads were awarded a good chance to get at the Saints' goal with a free kick from 22 yards out, but Bakare's effort was sent over for a goal kick.

The hosts' pressure continued, with a long throw from Andy Owens causing problems in the TNS area before a Rob Hughes cross just evaded Michael Wilde who was looking to send the ball goalwards from the six yard box in the 13th.

But then TNS hit back to take the lead, breaking into the Nomads' area with Aeron Edwards firing a powerful effort high into the net from around 12 yards out.

The goal gave the visitors a better hold on the game as they looked to frustrate Connah's Quay in their efforts to find an equaliser.

Bakare again threatened on the wing in the 24th minute with a wicked cross that was just missed by Wilde, with a follow up close range effort from Rob Hughes being saved by Harrison.

As the half went on, Nomads were playing much of their football in the TNS half, but were unable to find an equaliser against an organised Saints side.

There was a penalty appeal in the 38th minute, when Daniel Redmond dribbled within six yards of the Nomads' goal and was tackled by Harrison, but referee Lee Evans waved the TNS players' claims for a spot kick away.

In the 43rd, Adam Barton went on a near 70-yard run to get at the TNS goal, but his attempted cross went out for a goal kick from which Scott Ruscoe's side saw the half out to go in 1-0 up at the break.

Nomads made a change at half time, with front man Andy Owens replaced by defender Priestley Farquharson.

The second half started positively for Nomads, with a 46th minute Rob Hughes free kick testing Harrison in goal, who couldn't get a hold of the effort initially, with the shot deflecting off him allowing his defence to clear.

In the 51st minute, substitute Farquharson made his presence clear, when he made a vital block to deny Edwards a shot on goal from just seven yards out.

Just before the hour mark, injury forced Nomads to make their second change of the game, with Jake Phillips introduced in place of Rob Hughes who had taken a knock.

Phillips also made himself known, sending a shot goalwards from 20 yards which was collected by Harrison in the 64th minute.

Nomads' hunt for an equaliser went on, with Bakare battling away on the wing only to be restricted by the likes of Brobbel.

And on 71 minutes, Brobbel handed a huge advantage to TNS, when after a backheel flick on from Aeron Edwards, Mullan passed to Brobbel who from six yards turned with the ball to face goal and sent the ball past Disney and Danby.

Nomads were then served with another blow, being reduced to ten men in the 74th minute after Michael Wilde was dismissed with a straight red for a high tackle on Jon Routledge.

Trailing by two goals to nil and a man down, Nomads continued to look for a goal to push for a late comeback into the last ten minutes, but their efforts were to no avail with TNS in control of the affair.

After four minutes of injury time, the result confirmed Nomads' first loss in four league games and sends them second in the JD Welsh Premier table. They remain fighting on all three fronts in the race for European qualification, the Welsh Cup, and the Irn Bru Cup final against Ross County in Inverness on March 23rd.

They now turn their attentions to a clash with Newtown AFC on Friday evening at Deeside Stadium for a 7:45pm kick off. 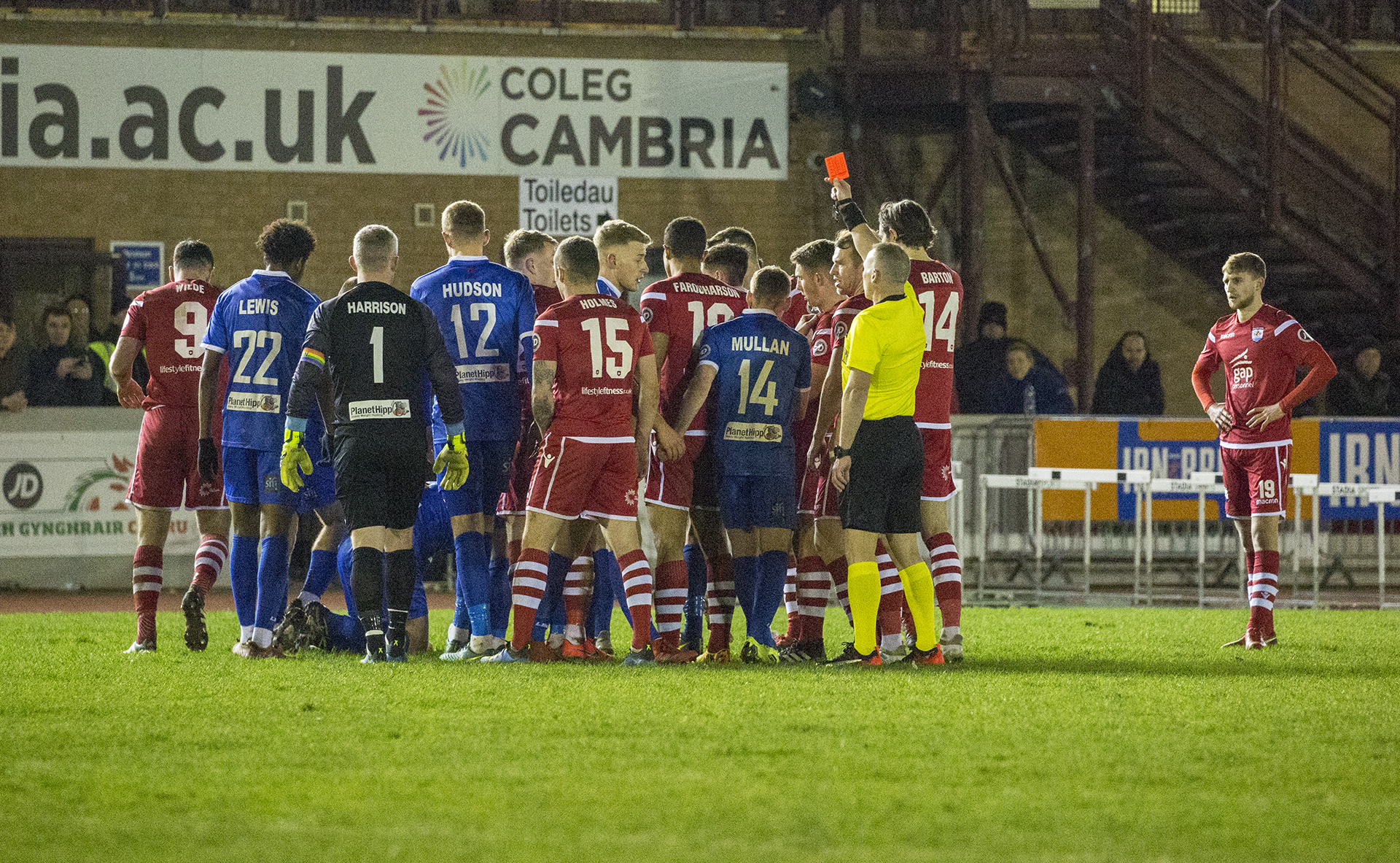 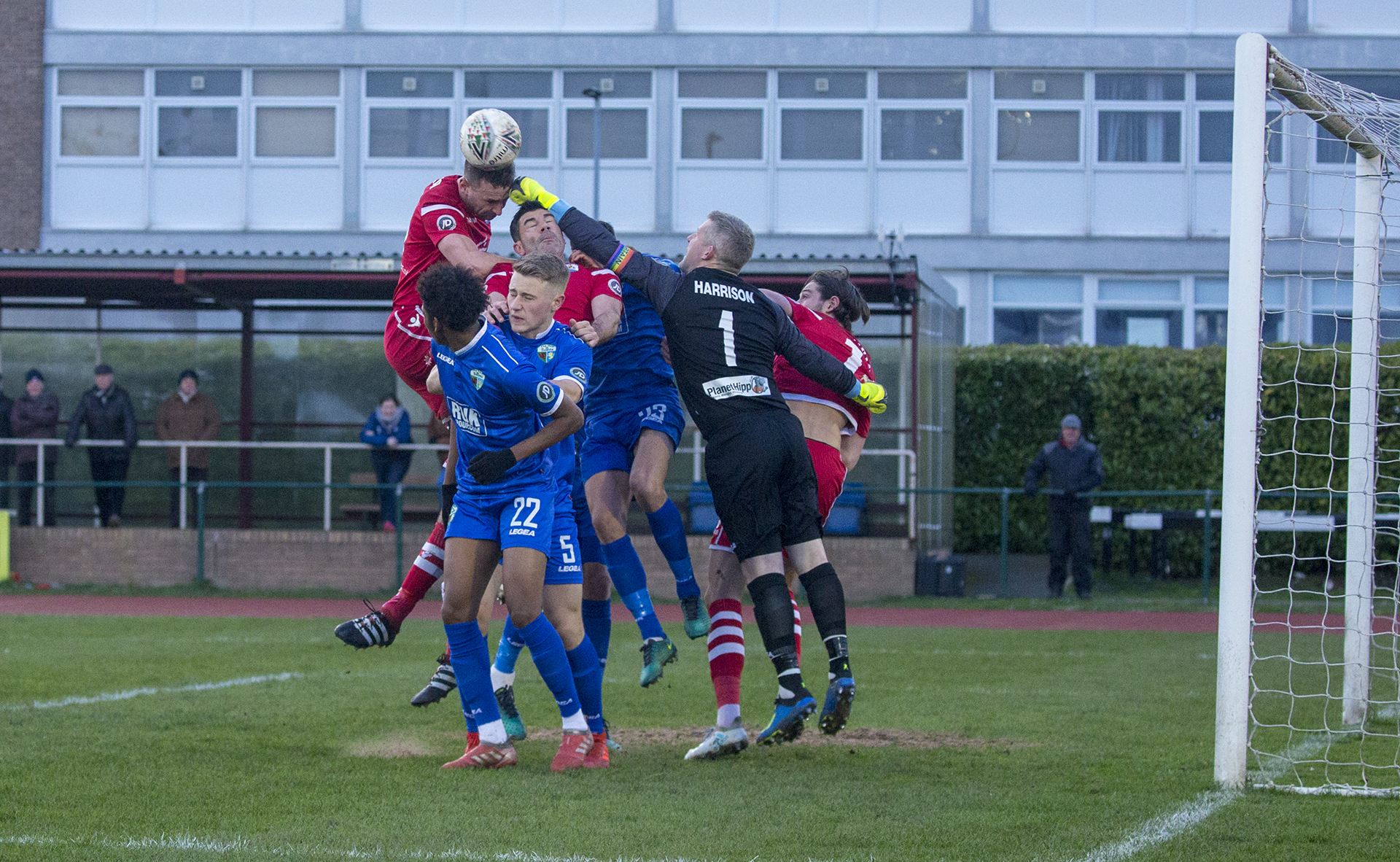 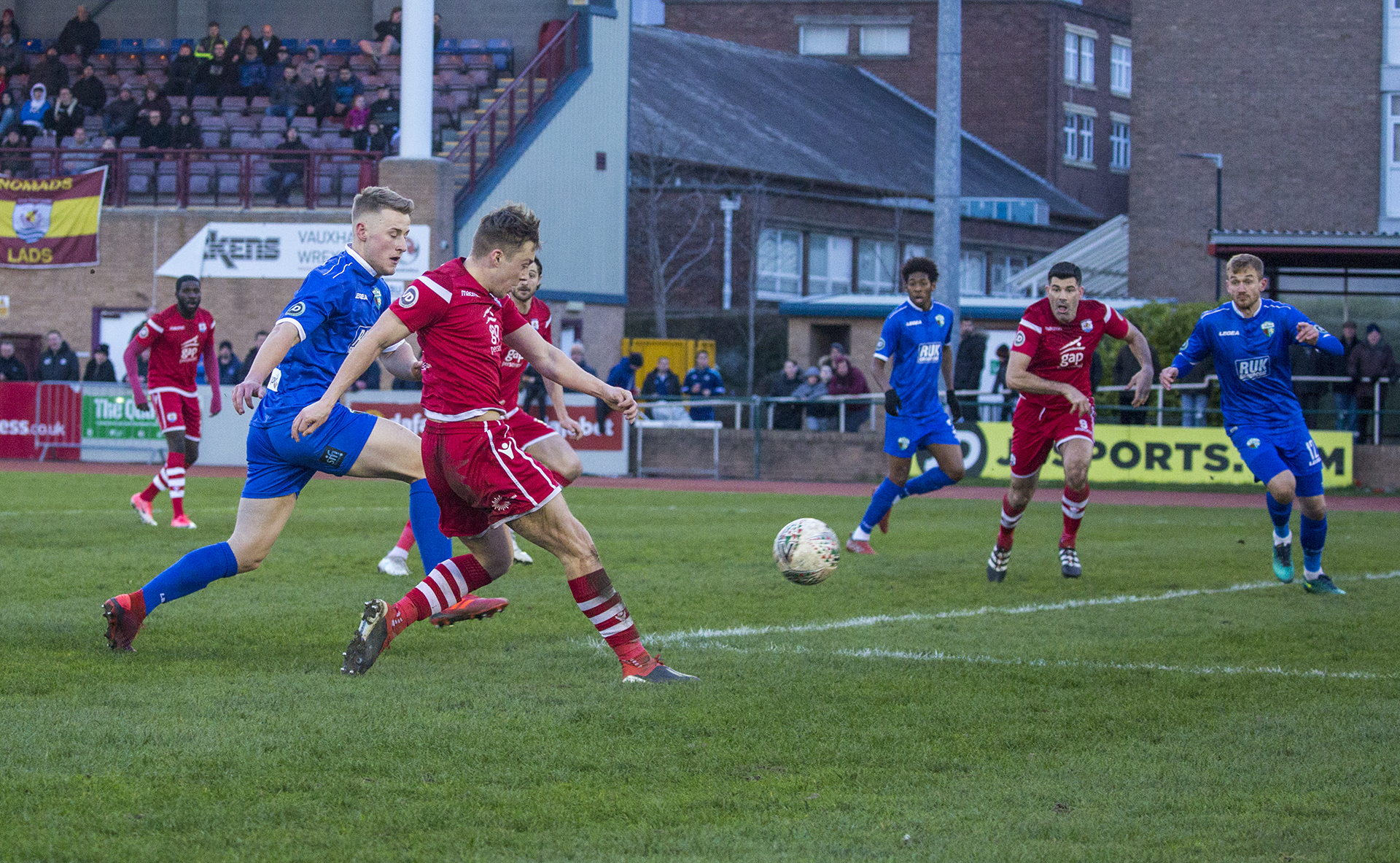 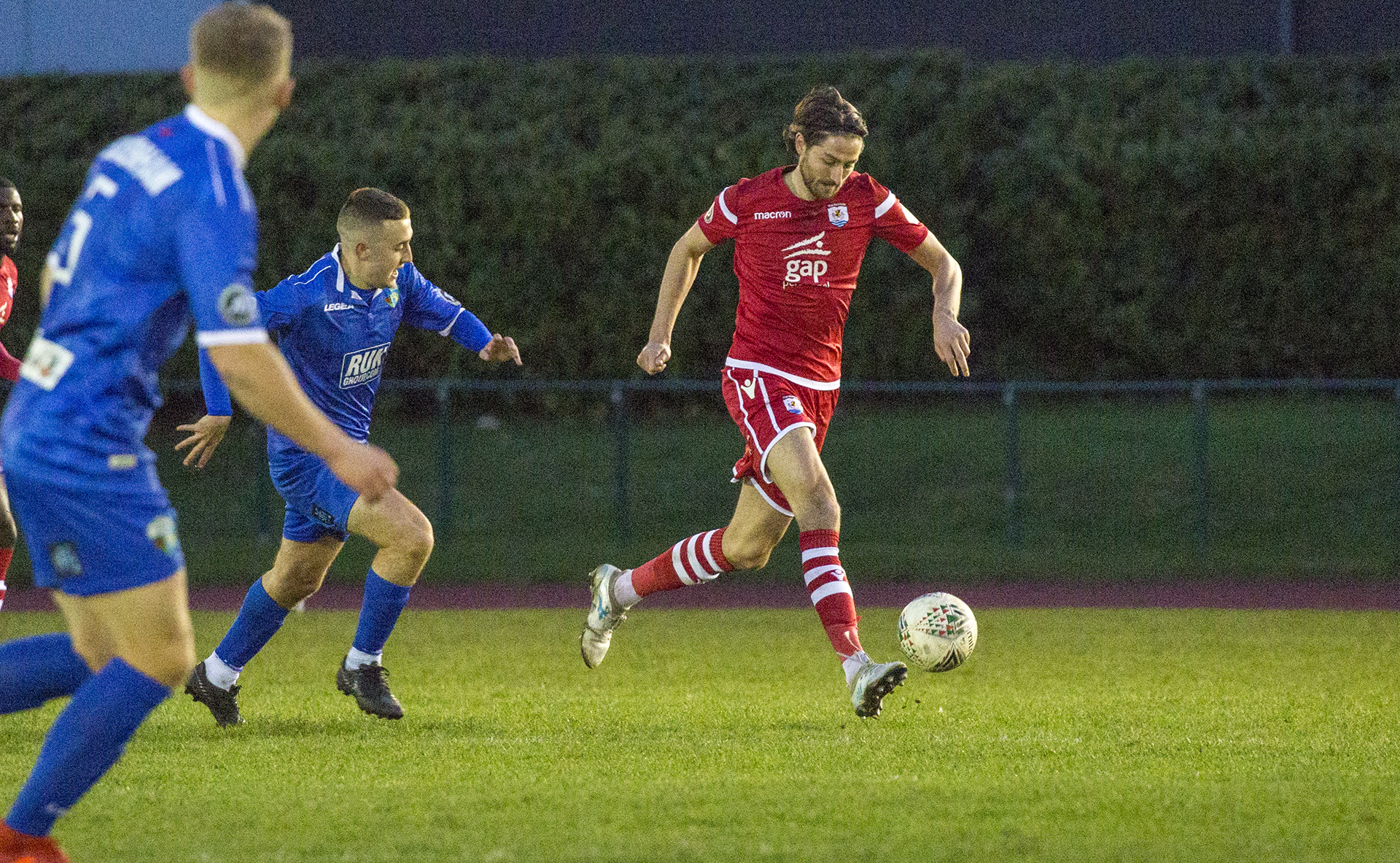 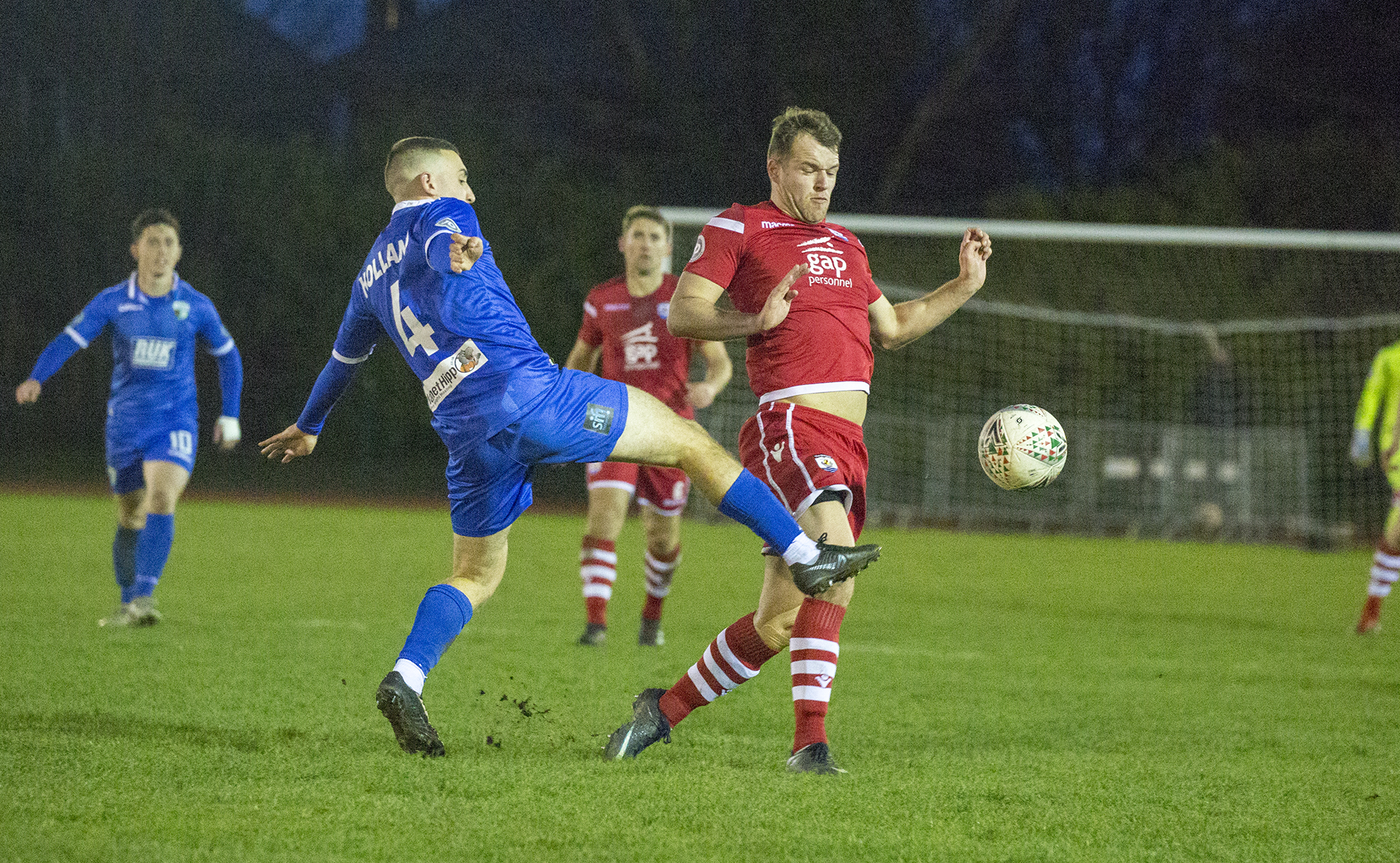