Nomads lose out in clash with Cofis

Connah's Quay Nomads were defeated 1-0 away at Caernarfon Town in the JD Welsh Premier League on Friday evening.

Despite the game being full of chances for Nomads, a Gareth Evans goal in the 17th minute was enough to hand the hosts victory at The Oval.

The Nomads came into the game after an action packed March which had seen them play in the Irn Bru Cup final against Ross County before reaching the JD Welsh Cup final and securing European qualification in the previous week with a 3-0 win over Cardiff Met.

Fifth placed Caernarfon were meanwhile focusing on closing the gap on fourth placed Newtown AFC to finish in the prime position for the end of season Europa League play offs.

Andy Morrison made two changes to his side, bringing in January signing and goalkeeper Lewis Brass to make his club debut, and replacing Callum Morris with Declan Poole. Michael Bakare and Andy Owens led the line for the visiting Nomads.

Caernarfon meanwhile started a side full of their strongest names including Nathan Craig, Jamie Breese, and Noah Edwards, who played a part in Nomads' 2018 European tie against Shakhtyor Soligorsk of Belarus.

The first action of the evening came in just the 2nd minute, when a cross into the Caernarfon area went to Andy Owens in front of an open goal, but his header towards the ground bounced and went wide from close range.

Caernarfon's Danny Brookwell then threatened in the 5th, going on a run down the left wing to send a 25 yard effort wide of Lewis Brass' goal.

After a closely contested opening to the game, Caernarfon won a 16th minute free kick just outside of the centre circle in the Nomads' half, with the set piece helping them take the lead.

From the kick they won a throw in deep in the Nomads' half, with Gareth Evans finding the throw in on the right wing to dribble around 20 yards from the Nomads' goal and send a well taken curling effort into the top left corner with 17 minutes played.

Nomads looked to reply instantly, creating a chance in the 20th minute, when Bakare connected with a Poole cross to send a low driving effort towards goal which was saved by goalkeeper Alex Ramsay.

Caernarfon then enjoyed a strong period, going close to scoring a second through Darren Thomas in the 24th, who sent a low effort past the left post from 18 yards, and Jamie Breese who went one on one with Brass to be denied by the woodwork on 27 minutes.

A minute later Bakare threatened for Nomads when a long Andy Owens throw in fell to him around ten yards from the Cofi's goal, but his effort went over the crossbar.

After an Owens free kick close to the Caernarfon area in the 33rd minute went out for a goal kick, Rob Hughes went on a run in the 36th, squaring the ball to the oncoming Adam Barton who had a low shot blocked from 15 yards out.

The Nomads were turning on the pressure in their pursuit of an equaliser before half time, with Poole firing wide in the 39th minute, and Michael Bakare taking a throw in and running onto the ball in the same passage of play to also send an effort wide on 42 minutes.

Despite creating a number of chances, Nomads went in trailing 1-0 at the interval. During the break, Andy Morrison rung the changes, replacing George Horan and Adam Barton with Callum Morris and Conor Harwood.

The first chance of the second half went to Caernarfon, as Darren Thomas, who was regularly looking to test the Nomads' keeper, found himself with space 25 yards from the goal, but shot wide on 53 minutes.

Then in the 57th, Jamie Breese again looked to double the hosts' lead when he lifted a shot above the crossbar from 18 yards out.

With 30 minutes left to find a result the Nomads began to control the proceedings, going forward at every opportunity with Harwood being just beaten to a low Poole cross by keeper Ramsay in the 64th.

In the 73rd minute Harwood did well to dribble past the Caernarfon defence and pass to Andy Owens, but he couldn't connect properly with the ball at a close range from the goal.

With 15 minutes to go, the Nomads were playing almost all of their football in the Caernarfon end, but despite efforts from the likes of Poole, Owens, and Bakare, they were yet to find their much sought after leveller.

In the 83rd minute Caernarfon attempted to seal victory, with Thomas racing past the Nomads' back line to go clear on goal only to send his effort wide.

As the full time whistle beckoned it was last chance saloon for the travelling Nomads, with Bakare going on a run down the left wing to send a cross in, but his delivery went out for a goal kick.

Inside an additional three minutes' injury time, the Nomads won two free kicks in dangerous positions near the Cofi's area, but both set pieces hit the Caernarfon wall as the equaliser continued to evade Nomads.

Referee Mark Petch signalled for full time to confirm a Nomads defeat, with Andy Morrison's side set to stay in second place regardless of other results during the weekend.

They now turn their attentions to next Friday night's fixture away to Bala Town at Maes Tegid for a 7:45pm kick off which will be streamed live on Sgorio's Facebook page. 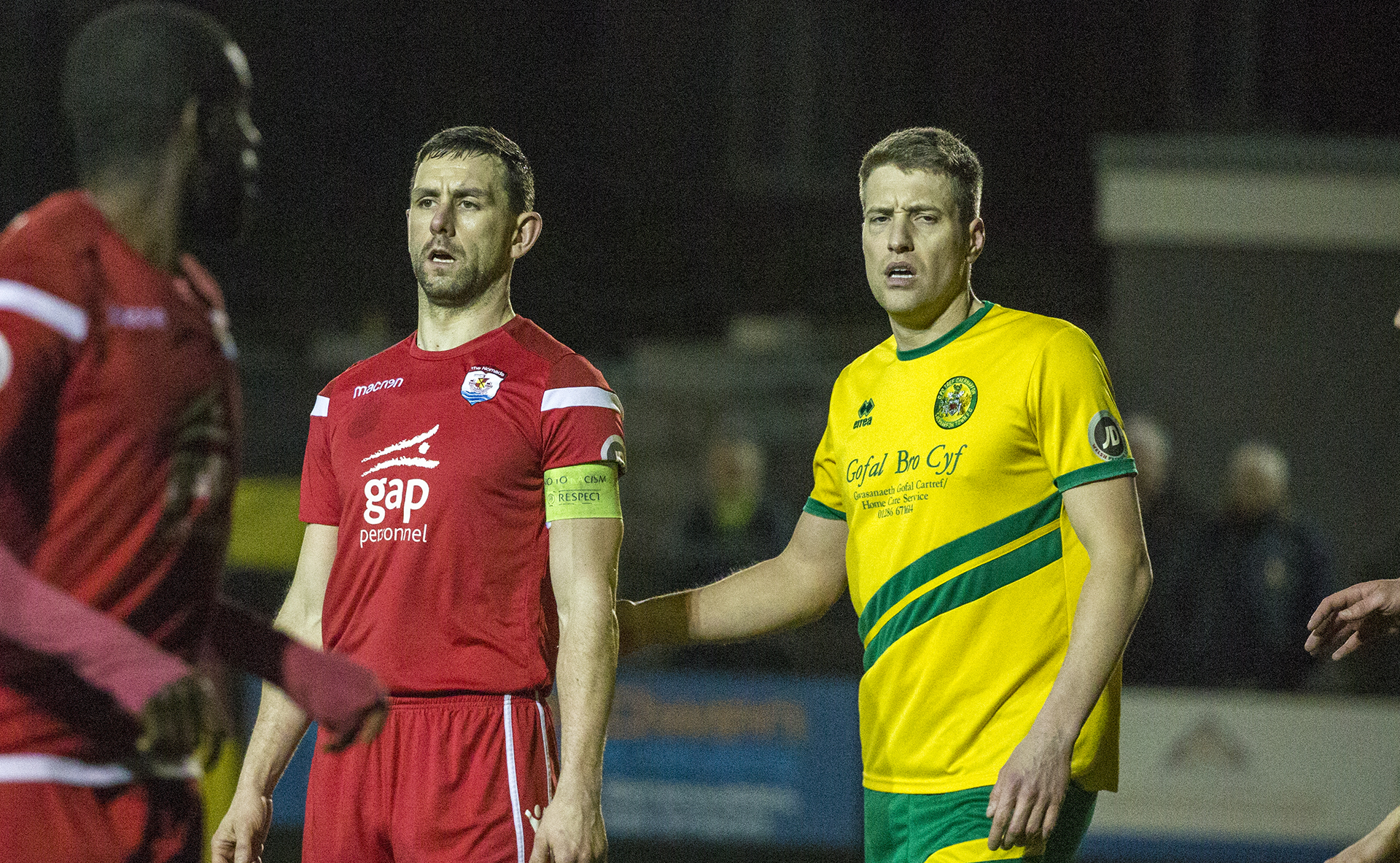