He first scored in the sixth minute, with a Bala equaliser in the 17th minute being undone by Woolfe's further strikes in the 27th and 47th. Adam Barton scored the fourth in the 86th minute.

The game was crucial in the JD Welsh Premier League title race, with anything but a win for Nomads set to seal the title for The New Saints. But Connah's Quay's only focus was indeed a victory, as they chased maximum points to keep their hold on second place to qualify for the Irn Bru Cup.

They came into the game having lost out 1-0 at Caernarfon Town the previous Friday, despite dominating with chances throughout the game. Bala were meanwhile looking to put a torrid week behind them which saw 7-0 and 5-2 losses to TNS and Barry Town respectively.

Nomads made six changes to their line up, with Nathan Woolfe, who returned from his loan at Airbus UK FC on Thursday, going straight into the starting eleven. He joined the returning Ryan Wignall alongside Michael Wilde, James Owen, and Danny Harrison.

The game got off to an ideal start for Nomads, who won a corner after two minutes and threatened with runs from Woolfe and Wignall on the left and right wings respectively.

They went ahead after just six minutes, when after a Danny Holmes long throw in was flicked on with a header from Wilde, allowing Woolfe to finish from close range.

Boosted by their lead, Nomads kept the pressure on the Lakesiders' end, going close in the 9th minute via Horan who headed a Woolfe corner towards goal only to see it saved by goalkeeper Ashley Morris.

With 15 minutes played, Nomads were on top and hitting Bala with some well worked waves of attacks, but Henry Jones scored against the run of play to equalise.

After a free kick was knocked onto him around eight yards from the Nomads' goal, he shot and was initially blocked by a good save from Quay keeper Lewis Brass, but followed up to finish from six yards out.

Jones remained dangerous on the front foot for the hosts, using his pace on the right wing to get to the Nomads' byline at regular intervals in the first half.

In the 23rd minute Nomads had a good chance to restore the lead when a free kick from around 30 yards out was taken by Woolfe, and headed just wide by Disney.

But in the 27th, Woolfe stepped up to find Connah's Quay's second with a goal of the month contender, getting on the end of a short Ryan Wignall corner to send a stunning 25 yard out strike past Morris.

Bala looked to once again come from behind to find an equaliser, with Henry Jones running to the byline in both the 34th and 36th minutes, but keeper Brass reacted in time to keep him out.

As the interval loomed the game was end to end, with John Disney going close when an 18 yard effort saw his shot go on target but get saved by the quick reactions of keeper Morris.

In the 42nd minute, confusion reigned as the Nomads had the ball in the net thanks to a George Horan header, with the goal being disallowed for a foul in the area after initially being given.

This meant Andy Morrison's side had to settle for a 2-1 lead at half time as they looked to build on a impressive first half performance.

The second phase started in similar fashion to the first, with Nathan Woolfe once again getting an early goal.

In the 47th minute, from a Danny Holmes throw in, he met an attempted headed clearance with a cool volley struck with his back to the goal, which went past Morris and into the top right corner of the net.

Woolfe's hat trick paved the way for Nomads to dominate the second half, managing the game against a Bala side still going for goal at every opportunity.

In the 55th, Ryan Wignall beat two defenders before switching the ball between his left and right in front of the Bala goal, but his shot was saved to deny what would've been another great individual goal on the night.

In the 59th, Nomads again went close to extending their lead when a George Horan diving header went just wide, although his attempt saw the offside flag go up.

After the hour mark, Bala hit back with some pressure on the Nomads' end, but assured defending from the likes of George Horan, who repeatedly won headers throughout, kept keeper Brass untested.

Not content with three goals, Woolfe continued to search for a fourth in the 70th minute, when he took a corner kick that nearly swung into the host's net if not for a clearance from the Bala stopper.

With 15 minutes to play Bala were reduced to 10 men, when Anthony Stephens was shown a second yellow card and dismissed by Tom Williams.

Nomads' chances continued to come against a depleted Bala, with a Danny Harrison cross being headed over by Michael Wilde.

Inside the final 10 minutes of the match, Ryan Wignall was replaced by Declan Poole, before Dundee United loanee Adam Barton opened his Nomads account with an 86th minute strike.

When a free kick sent into the Bala area by Woolfe was flicked on by a Wilde header, Barton sent a sweet volley past Morris and low into the Bala net.

Nomads' final move of the night saw Michael Wilde substituted in place of new signing Jamie Insall, who made his club debut and return to football in the closing moments of the game.

The result keeps Nomads second in the JD Welsh Premier League with two games left to play in the regular season.

They are next in action on Saturday 20 April, welcoming Barry Town United to Deeside for a 2:30pm kick off. 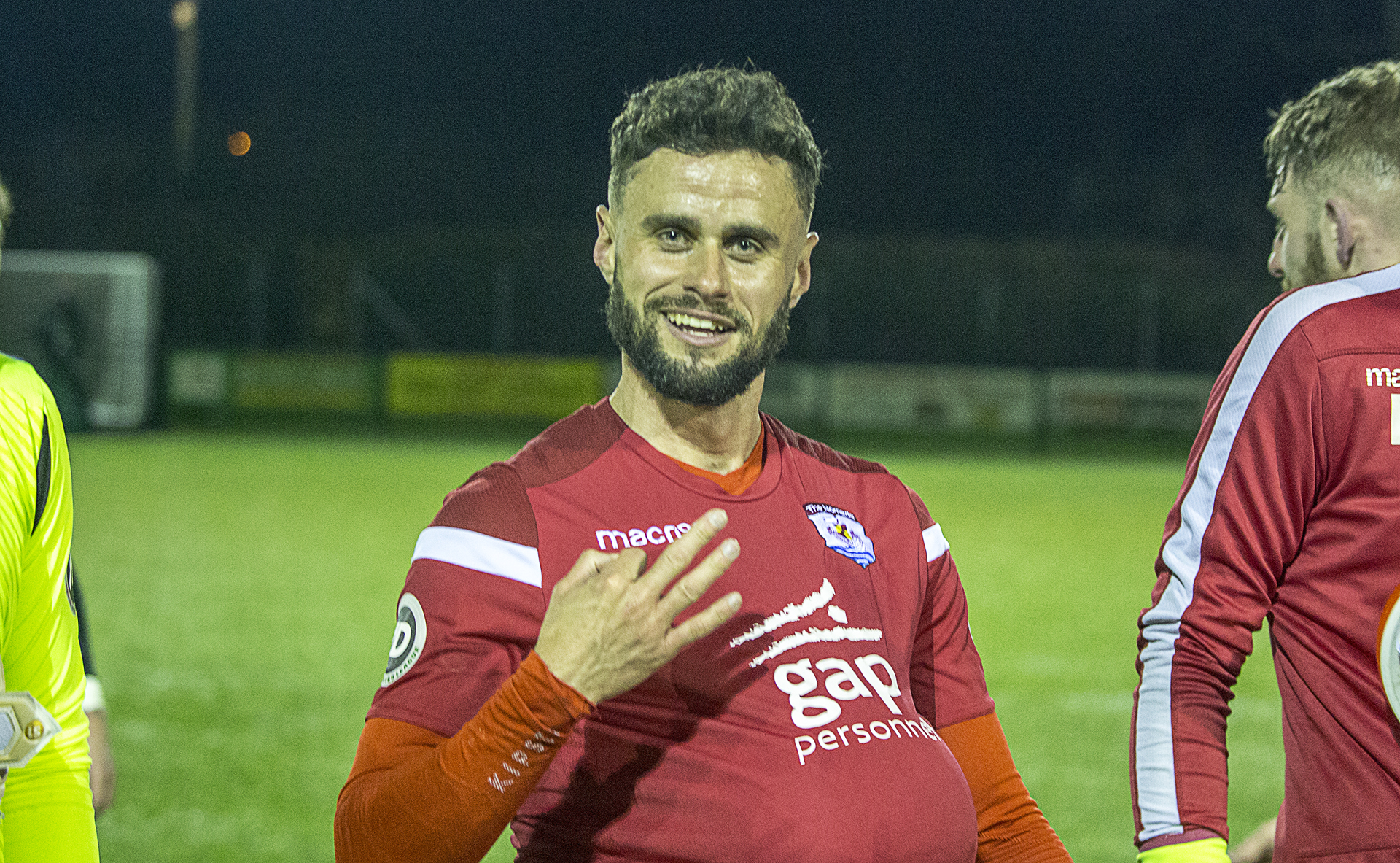 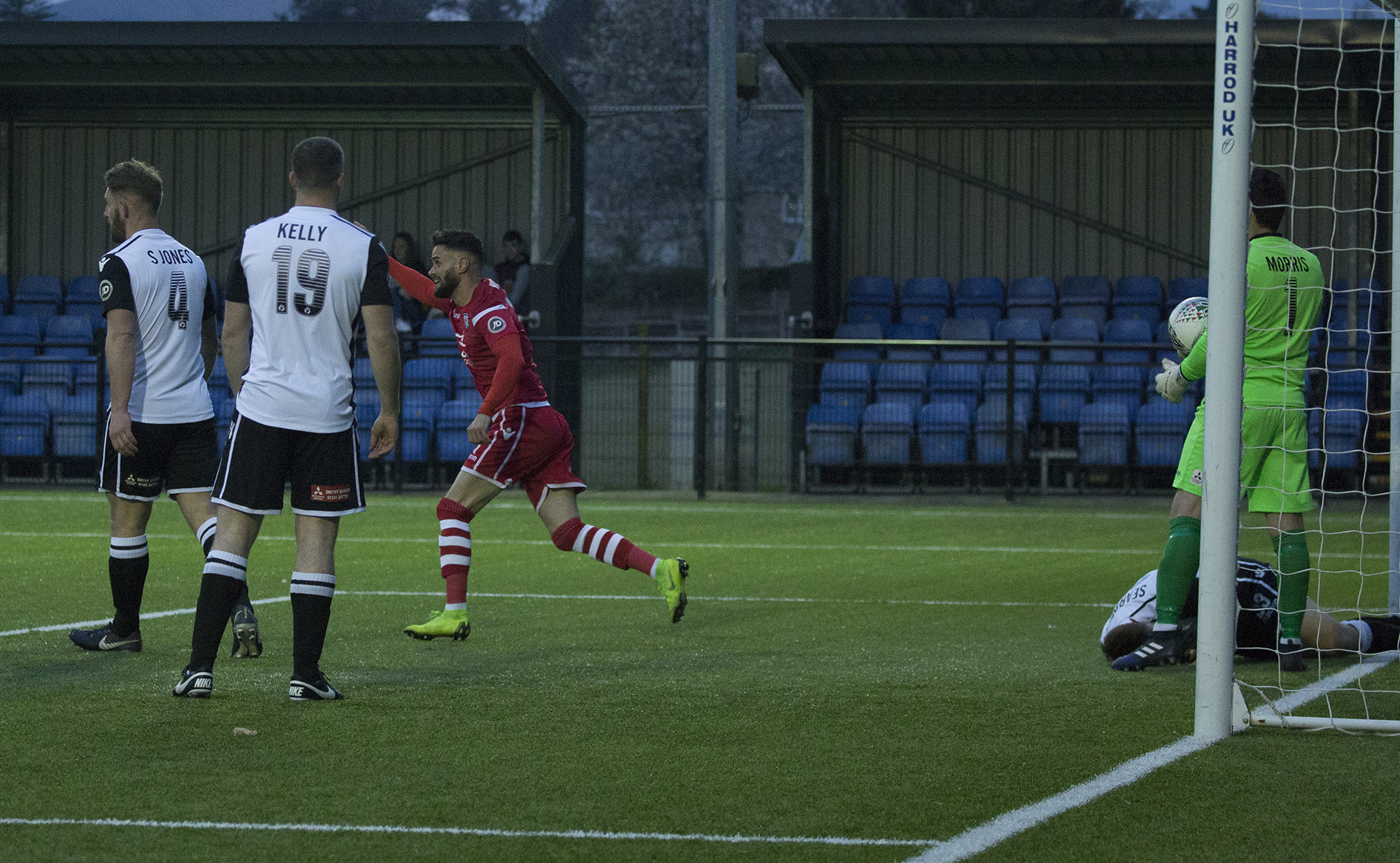 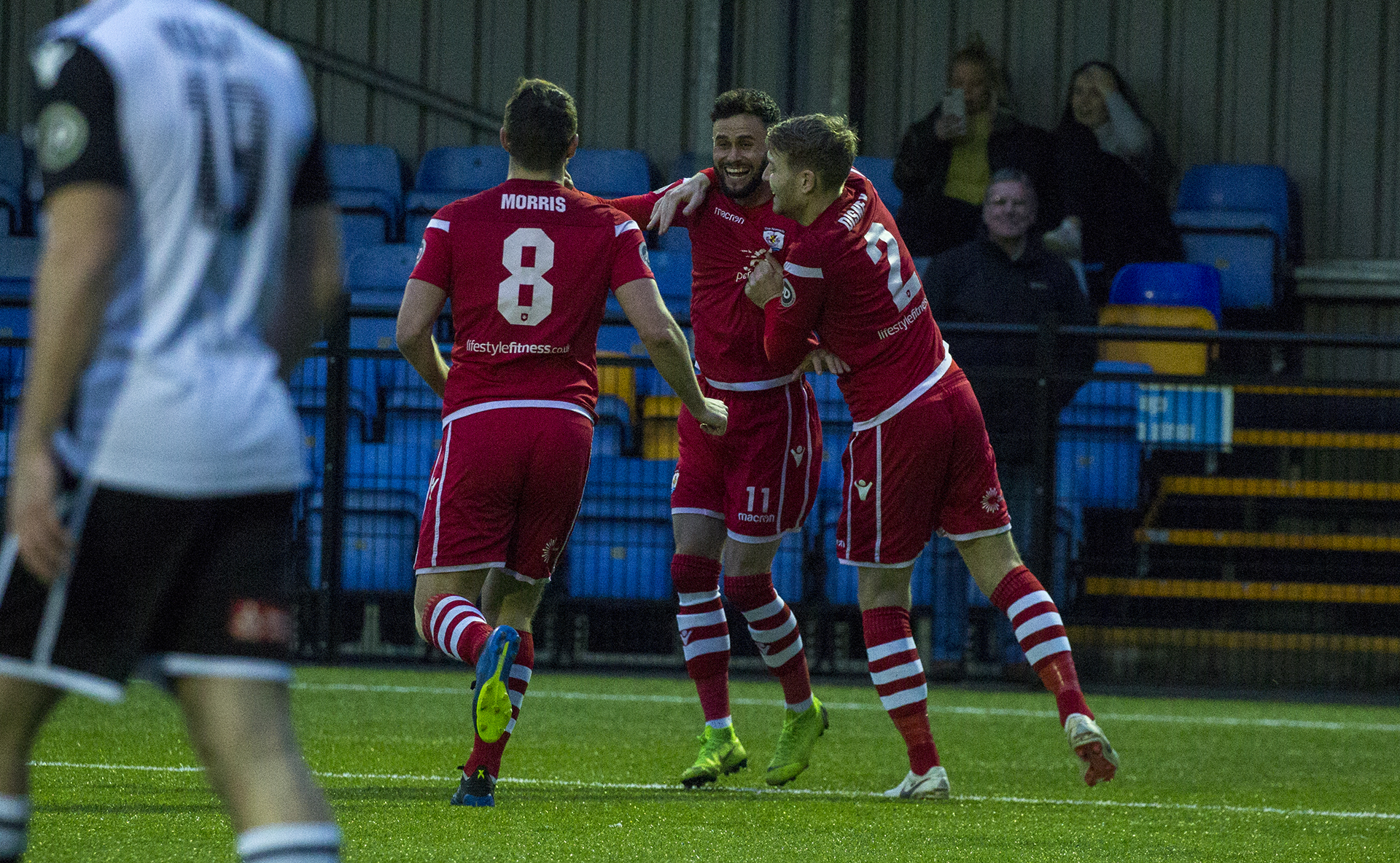 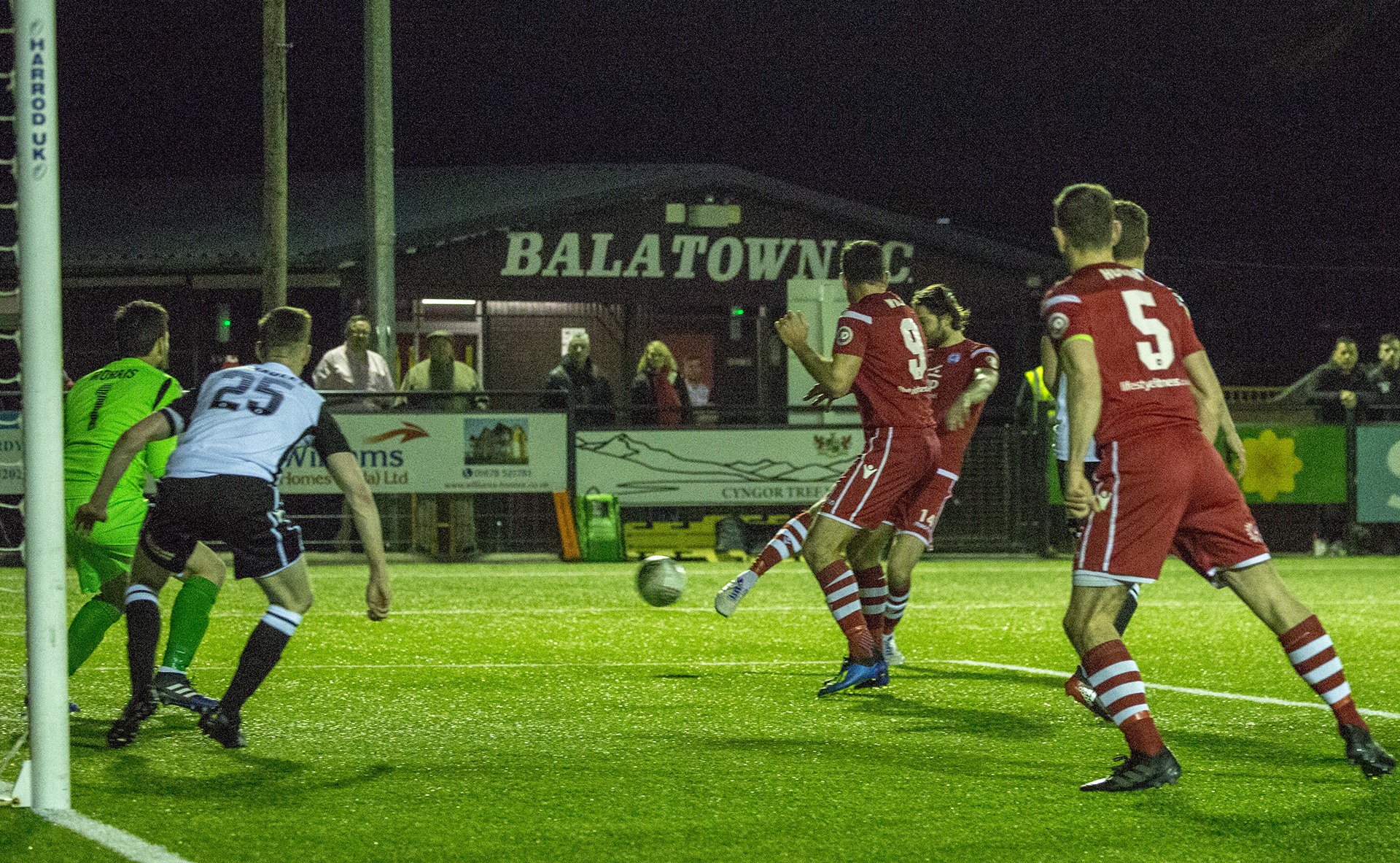 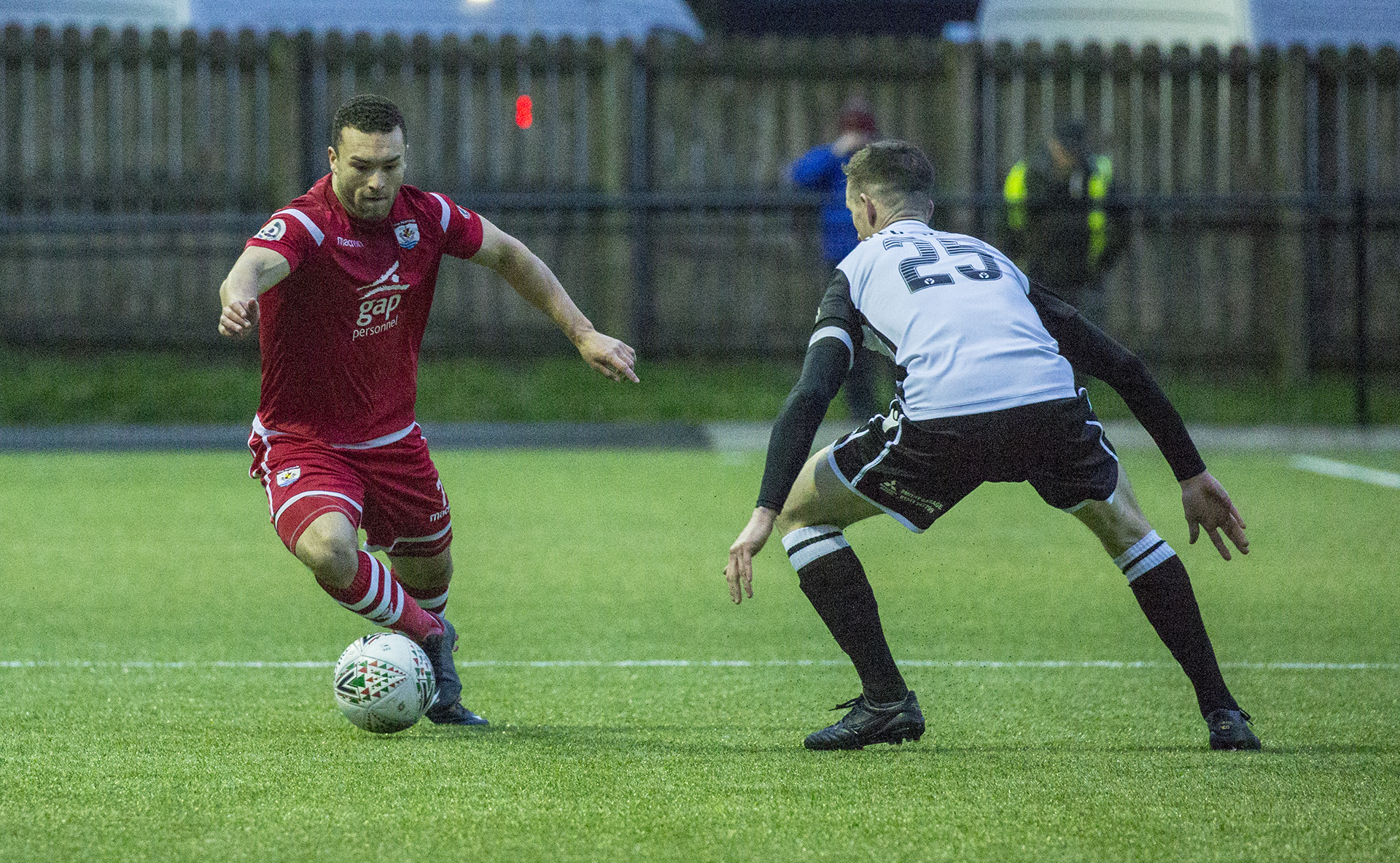