Connah's Quay Nomads played out a 1-1 draw with Barry Town United in their final home game of the 2018/19 season.

A 29th minute Michael Wilde goal sent Nomads ahead, with a Jonathan Hood strike in the 70th minute ensuring the spoils were shared at Deeside.

The fixture marked Nomads' final home game of the season as they looked to wrap up an excellent campaign at Deeside, having lost just twice at home in the league and beaten both Coleraine and Edinburgh City in the Irn Bru Cup.

Their opponents, Barry Town United, were the only team they hadn't yet beaten in the league after a loss at Jenner Park in September and two subsequent draws.

Although the two sides had been battling for European qualification for much of the season, they both came into the game confirmed as Europa League qualifiers for the 2019/20 campaign.

Nomads were looking to mathematically secure second place against third place Barry, having all but already finished second due to superior goal difference. It was also a chance for Andy Morrison to write more history at Nomads, having achieved the club's best ever top flight league points tally with a 4-1 win over Bala in the previous week.

He made four changes to the starting line up, with forward Jamie Insall making his home debut after making a substitute cameo against Bala. He was joined by Priestley Farquharson, Michael Bakare, and John Danby.

Barry Town started some of their household names including Jonathan Hood, Kayne McLaggon, and Chris Hugh as they looked to go one better from their last visit to Deeside which ended in a 2-2 draw.

In the sixth minute, Barry made a good run into the Nomads' half and looked to square the ball in front of the Nomads' goal mouth, but John Disney was there to make a vital interception.

With 10 minutes played, Connah's Quay began to win set pieces against their opponents, with Woolfe taking a corner in the 13th and sending a throw in into the Barry area in the 16th, which was aerially contested for by Horan and Wilde before a foul against goalkeeper Mike Lewis was given.

Priestley Farquharson showed his defensive quality in the 25th minute, when he stopped Louis Gerrard from reaching the Nomads' area on a run. Barry then won a free kick in a good position 22 yards from goal, but the resulting effort swung wide and out for a goal kick.

The deadlock was broken in the 29th minute, when a well taken Jamie Insall cross went to Michael Wilde, who rose and headed from close range in the Barry area to make it 1-0 to Nomads.

Following the opener, Nomads remained on top of the proceedings, seeking to extend their lead with good attacking play from the likes of Wilde, Bakare, and Woolfe.

In the 38th minute Bakare helped put more pressure on the visitors, beating his man on the left wing to have a low cross go out for a corner ball which caused a goalmouth scramble before Barry won possession via a free kick.

Woolfe then went close in the 41st minute, as after linking up with Bakare, he sent the ball towards goal with a low effort from 18 yards which was collected by keeper Lewis.

After a free kick went out for a corner, Woolfe again played a part in a Nomads chance when his delivery was narrowly headed over by Michael Wilde in the 44th minute.

Having created good chances, the Nomads were forced to settle for their 1-0 lead at half time after a strong first 45 minutes at Deeside.

And they looked to build on it in the second half, with their attacking intentions clear from the off, when immediately after the restart Nathan Woolfe sent a 35 yard effort towards goal which was pushed out for a corner by keeper Lewis.

In the 47th minute they won a free kick just six yards from the Barry area, with Bakare's set piece effort hitting the wall and going out for a corner, which was taken by Woolfe and headed over by Horan in a good chance for Nomads.

The set pieces kept on coming for the hosts, with Horan again seeing a header go just above the crossbar after a Nathan Woolfe throw in in the 52nd.

Nomads' first substitution saw Jamie Insall replaced by Andy Owens, as Andy Morrison looked to add more strength and height to his side as they sought a second goal.

A minute after the hour mark, Michael Bakare set up Nathan Woolfe, who switched the ball between his left and right feet before shooting just over from 15 yards out.

60 seconds later, Callum Morris ran the ball close to the Barry byline before cutting it back to Bakare, who couldn't connect with it at close range as chances continued to go amiss at Deeside.

In the 66th minute, substitute Andy Owens went one on one after beating his man in an aerial battle for the ball, turning to run at goal but shooting wide of the right post from seven yards out.

But in the 70th minute, against the run of play, Louis Gerrard and Jonathan Hood broke free on goal, and despite John Danby rushing out to try and block the chance, a strike from Hood was enough to see Barry equalise.

There was almost an instant reply to the goal in the 71st, when Priestley Farquharson found himself with the ball in the area just eight yards from the Barry goal, but his low effort went wide.

A stalemate then commenced for much of the remainder of the game, with both sides winning set pieces but being cancelled out by each others' defence.

In the 83rd minute, Rob Hughes replaced Nathan Woolfe in Nomads' final substitution of the day as they continued a search for the winner, with Ryan Wignall running down the wing in the 87th only to see the ball roll out for a throw in.

In the three additional minutes of injury time, Barry Town went closest in the 92nd, with substitute Momodou Touray sending the ball glancing across the Nomads' goalmouth only to find none of his teammates there to send it goalwards.

Full time was then confirmed, with the draw enough to see Nomads seal their status as JD Welsh Premier League runners up 2018/19 and qualify for the Irn Bru Cup next season.

The Nomads now go into an end of season double header against The New Saints FC, facing them in the final league fixture of the campaign next Friday 26 April for a 19:45 kick off at Park Hall in a Facebook live game.

They then face off against TNS in the JD Welsh Cup final on Sunday 5 May at Cefn Druids' The Rock stadium for a 14:45 kick off, broadcast live on S4C's Sgorio. 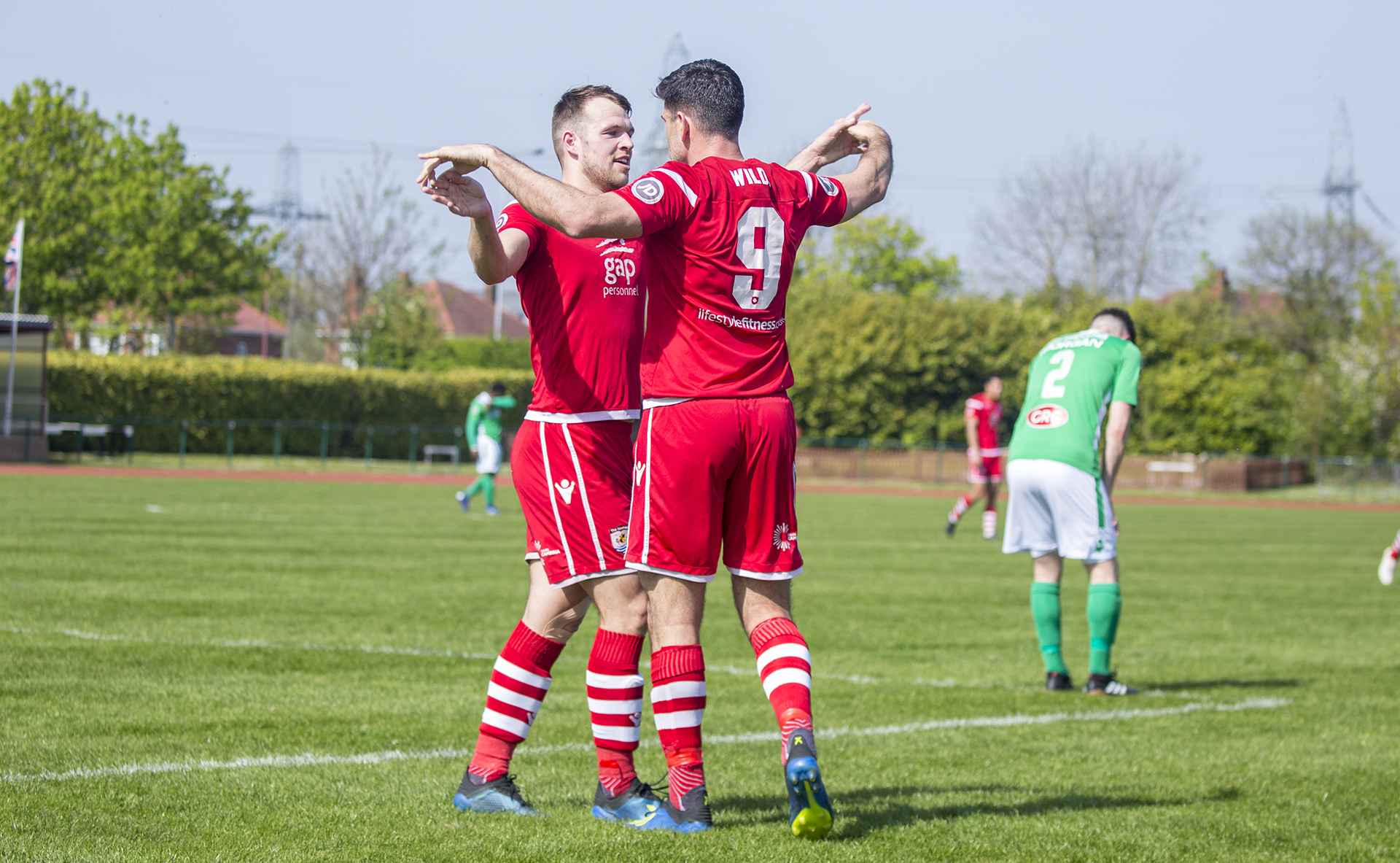 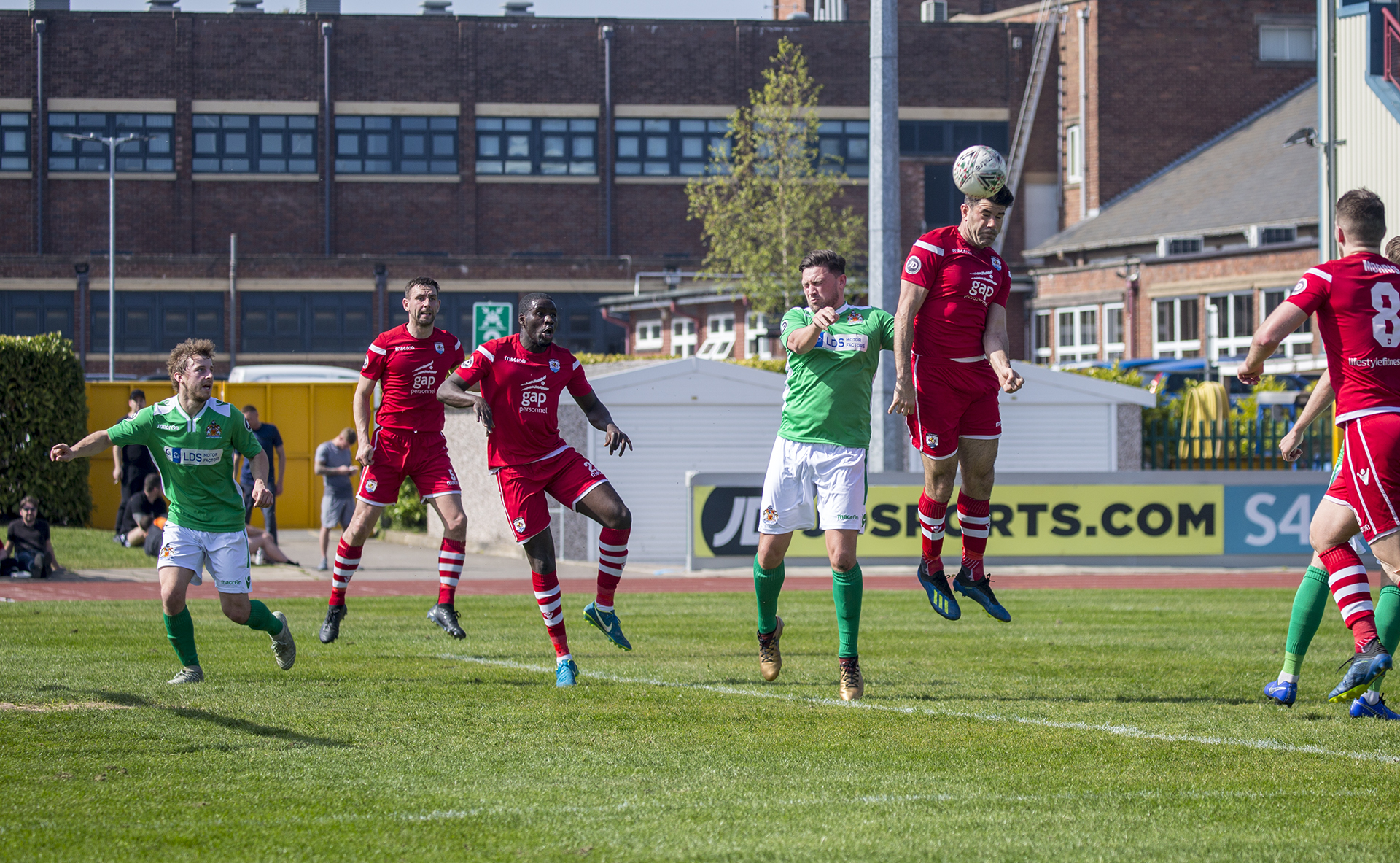 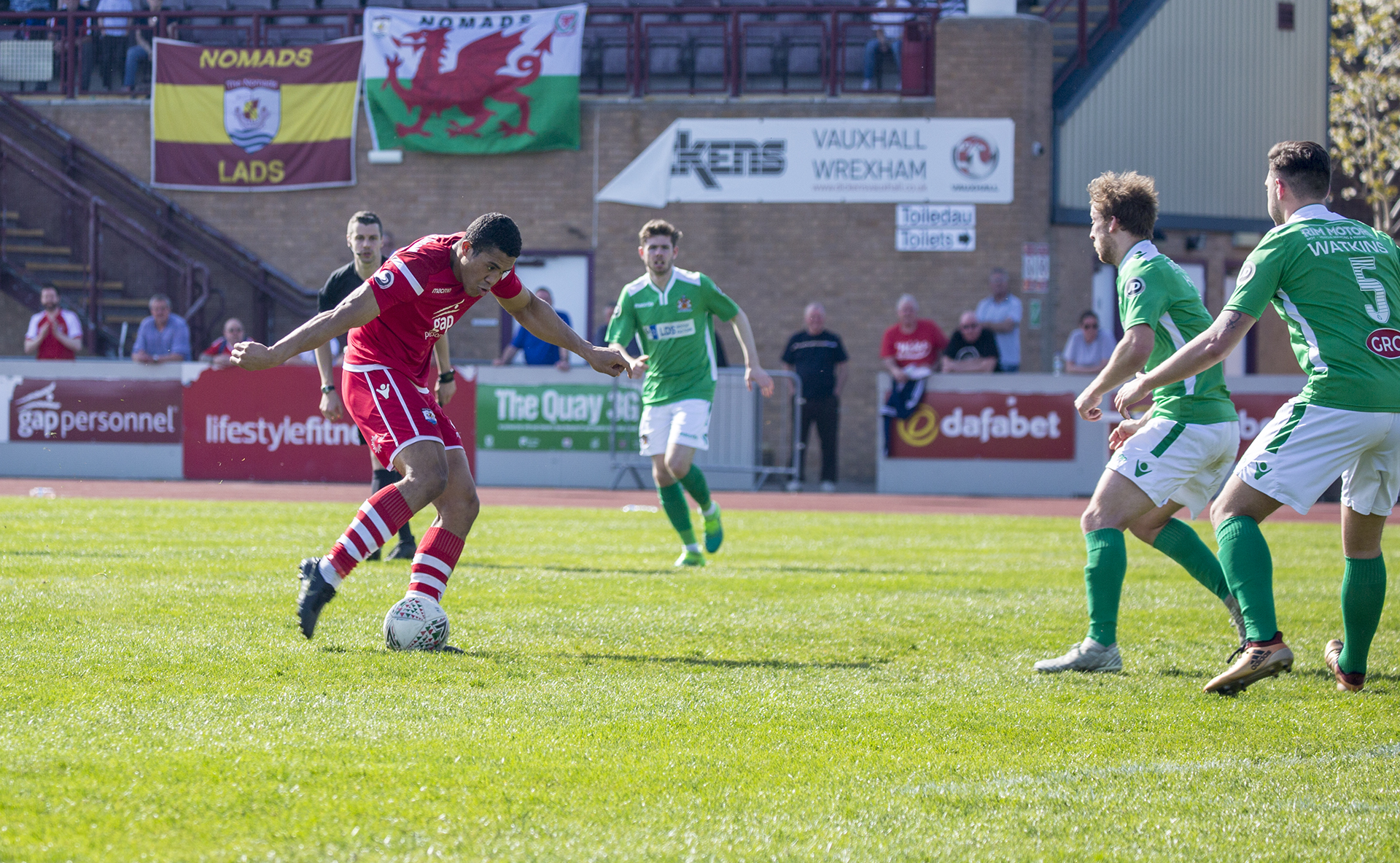 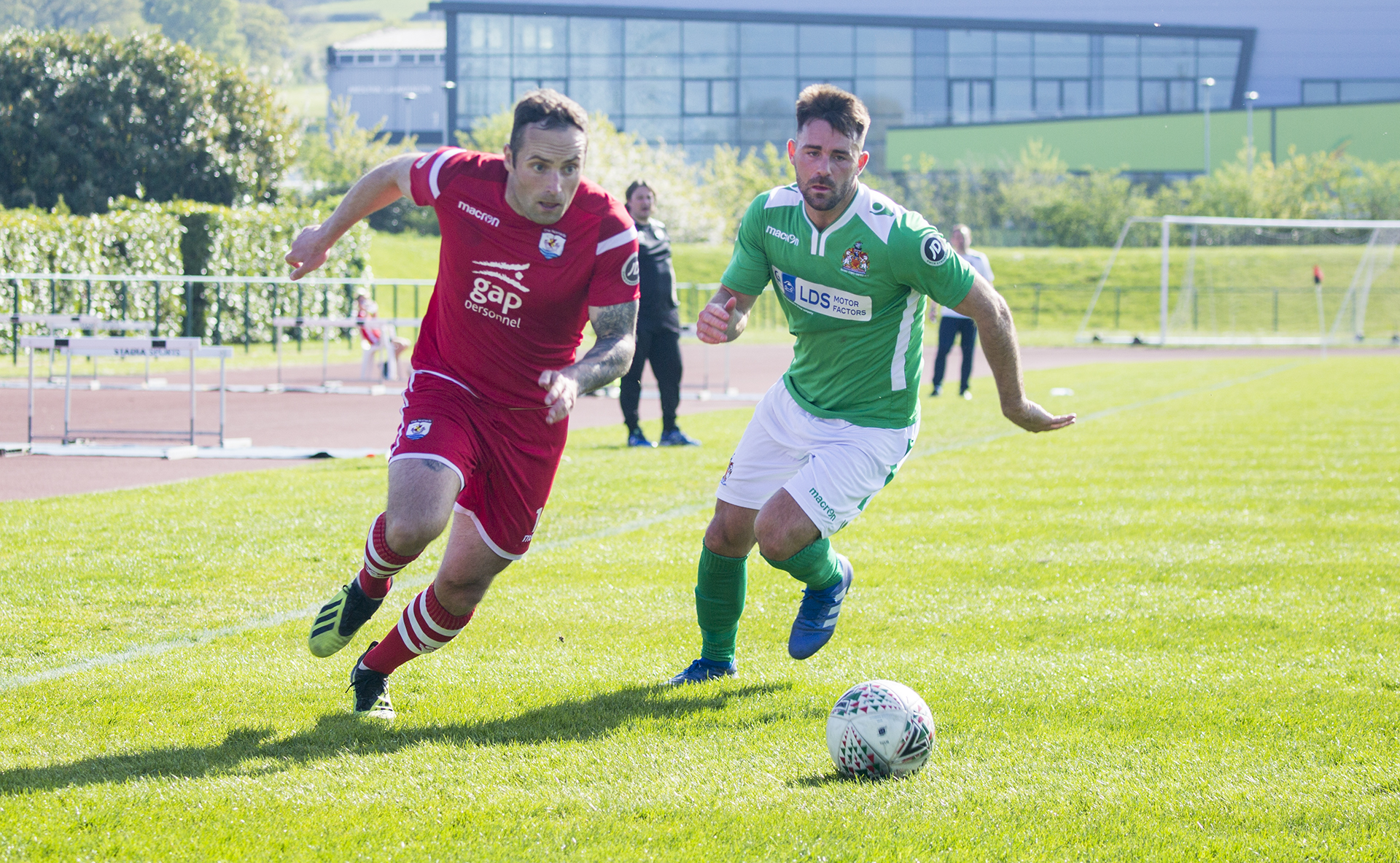