Connah’s Quay Nomads reached the semi finals of the JD Welsh Cup with a 2-1 win over Caernarfon Town at The Oval on Friday evening.

A Rob Hughes wonder goal opened the scoring in the 25th minute, with a 28th minute header from Gareth Edwards sending the cup tie level before Michael Wilde sealed victory with a 63rd minute strike.

The JD Welsh Cup quarter final was Nomads’ third game in just six days, following a 1-1 draw with Barry Town on Saturday evening and a last minute 1-0 victory over Bala Town on Tuesday with the goalscorer academy product Conor Harwood.

After defeating Guilsfield and Carmarthen Town in the third and fourth round respectively, Caernarfon Town were the next side standing in the way of current holders Nomads’ cup defence.

The visitors were looking for a first win in three games, having gone on a losing run since being defeated 6-2 by Nomads at Deeside last month. They did however have form against the visitors at The Oval, after holding them to a goalless draw in an October phase one fixture.

Andy Morrison made three changes to his line up, as Priestley Farquharson, Rob Hughes, and James Owen started to replace the cup tied Jake Phillips, John Disney, and Andy Owens.

The game began and Nomads immediately showed their attacking intent as Bakare won a corner in the first minute, with a following corner seeing Priestley Farquharson send a 12 yard effort wide.

Rob Hughes produced the first moment of the match in the 10th, when he sent an effort off the Caernarfon crossbar from around 20 yards out.

Nomads’ attacks continued, with a Danny Holmes throw in in the 16th minute being initially dropped by goalkeeper Alex Ramsay before he was able to recover the ball.
The pressure was kept on the Caernarfon end, with Wilde just missing out on a clear header at close range from a 24th minute free kick.

But a minute later, Rob Hughes opened the scoring with a stunning curling effort which went straight into the top right corner of the Caernarfon net.

But the elation of Nomads’ lead was short lived, as three minutes later, Danby was unable to get a hold of an aerial ball in the Nomads’ area, allowing Gareth Edwards to rise up in the area and head Caernarfon level.

Connah’s Quay looked to restore their lead before the break, winning multiple set pieces in the Caernarfon half. Their best chance came from a throw in, which was crossed in by Hughes to Horan, who had a header from eight yards out pushed away by goalkeeper Ramsay.

After three minutes of injury time, both sides were forced to settle with a 1-1 scoreline at the break after a competitive first 45 minutes.

As the game got back underway, Caernarfon immediately broke into the Nomads’ half to win a corner as they plotted a strong second half performance.

And with the hour mark approaching, the Cofis were enjoying a positive spell with sustained periods of possession in the Nomads’ half, with captain George Horan’s defensive line helping deny them any shots on goal.

In the 59th, Danny Holmes went close when he sent a Harrison free kick towards goal from only eight yards to be denied by Ramsey.

But Michael Wilde made no mistake four minutes later, when he sent a low cross from Bakare in with a sliding effort from six yards out to make it 2-1.

With 20 minutes to play Nomads remained in the lead knowing they would have to contain a determined Caernarfon side, who were gunning for a place in the JD Welsh Cup semi finals.

Whilst the likes of Bakare and Hughes continued to cause problems on the wing and win set pieces, Nomads made their first substitution in the 75th minute replacing Danny Harrison with Michael Parker.

The Nomads’ substitute nearly yielded an instant impact as he got in front of goal to try and connect with a Rob Hughes cross, which just evaded him.

Caernarfon continued to look for opportunities to equalise, with 21 year old defender Priestley Farquharson pulling off an impressive performance by consistently winning battles against the likes of Sion Bradley.

In the 83rd minute, Danny Holmes was left rueing a chance to end the game as after a Hughes strike deflected off a defender, he sent a close range effort glancing past the left post from the right of the Caernarfon area.

As the game’s final moments approached, Nomads showed great composure to keep Caernarfon at bay, winning a series of free kicks across the field to retain possession.

In the 1st of a total of four minutes’ injury time, Nomads’ introduced John Disney to replace Michael Bakare as they looked to maintain their control on the game.

And they just did that, with referee David Morgan signalling full time to confirm a Nomads win and their fourth consecutive JD Welsh Cup semi final, as they continue their campaign to retain the cup, having lifted it for the first time in their history in May 2018.

The win marked the end of a successful six days for the club in which they had drawn 1-1 at Barry Town in a live S4C game, beaten Bala Town 1-0 with an 89th minute winner, and remained in the JD Welsh Cup.

They now turn their attentions to a blockbuster 1st versus 2nd game against The New Saints at Deeside Stadium next Saturday 9th March for a 5:15pm kick off, with the game also live on S4C Sgorio. 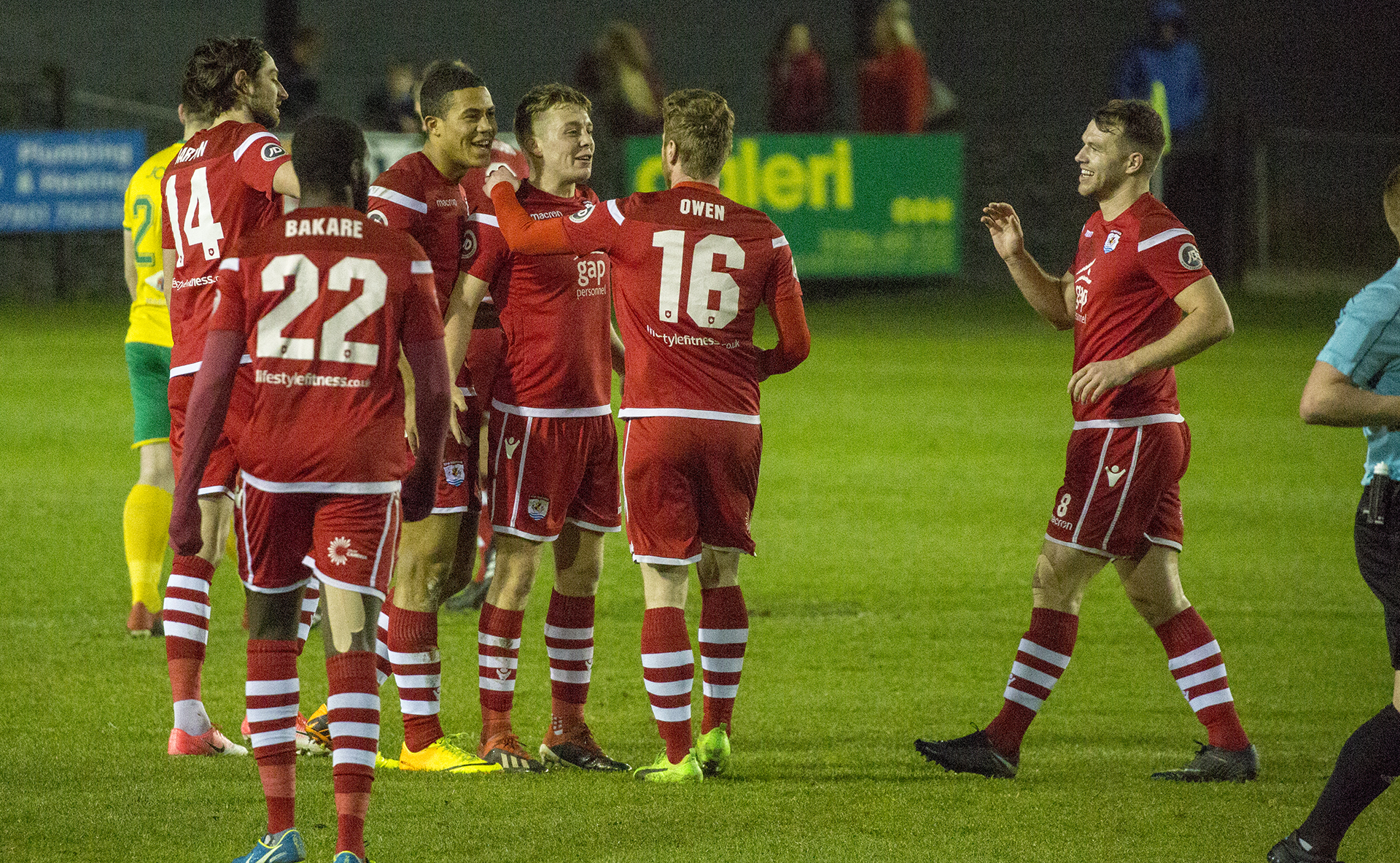 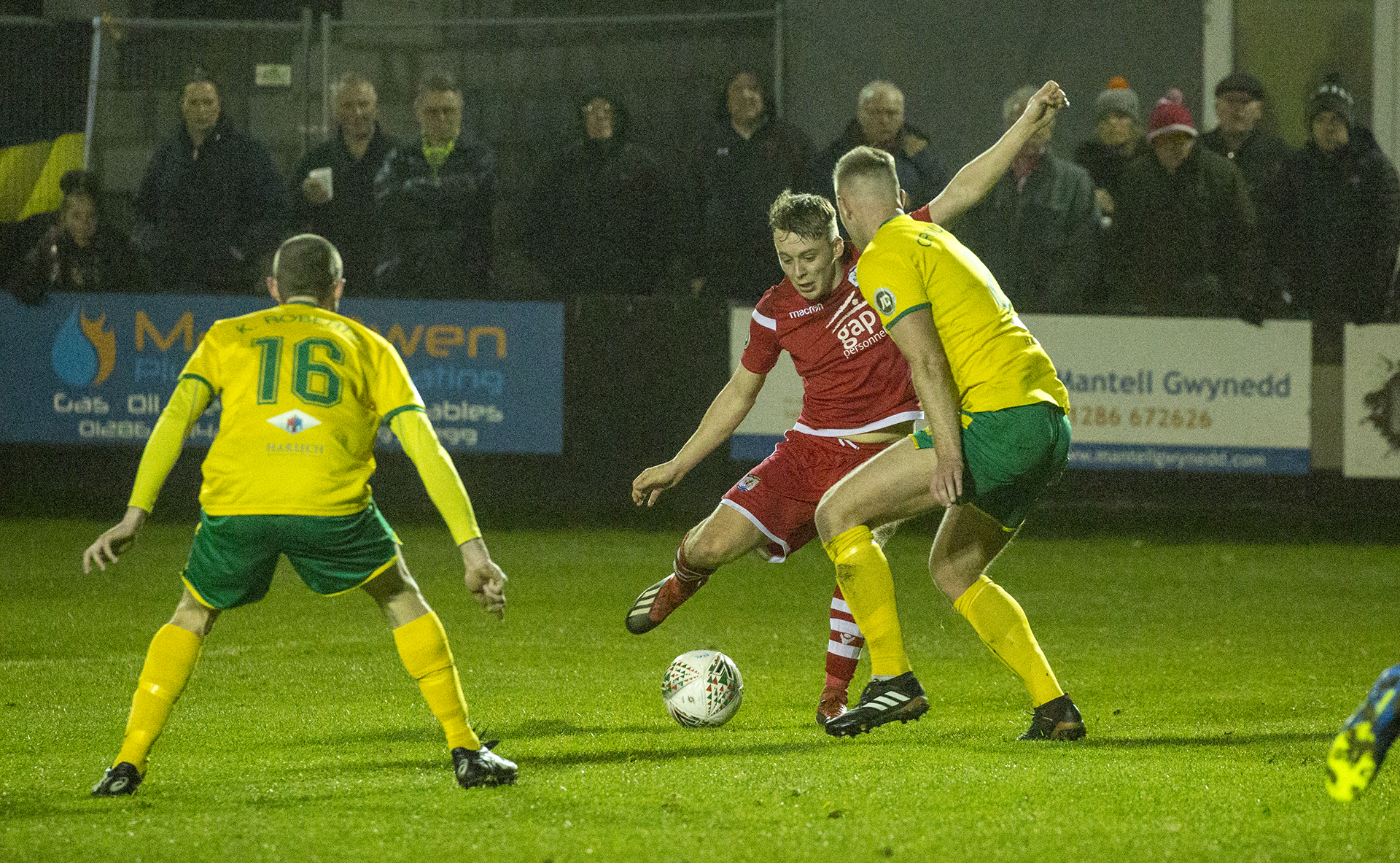 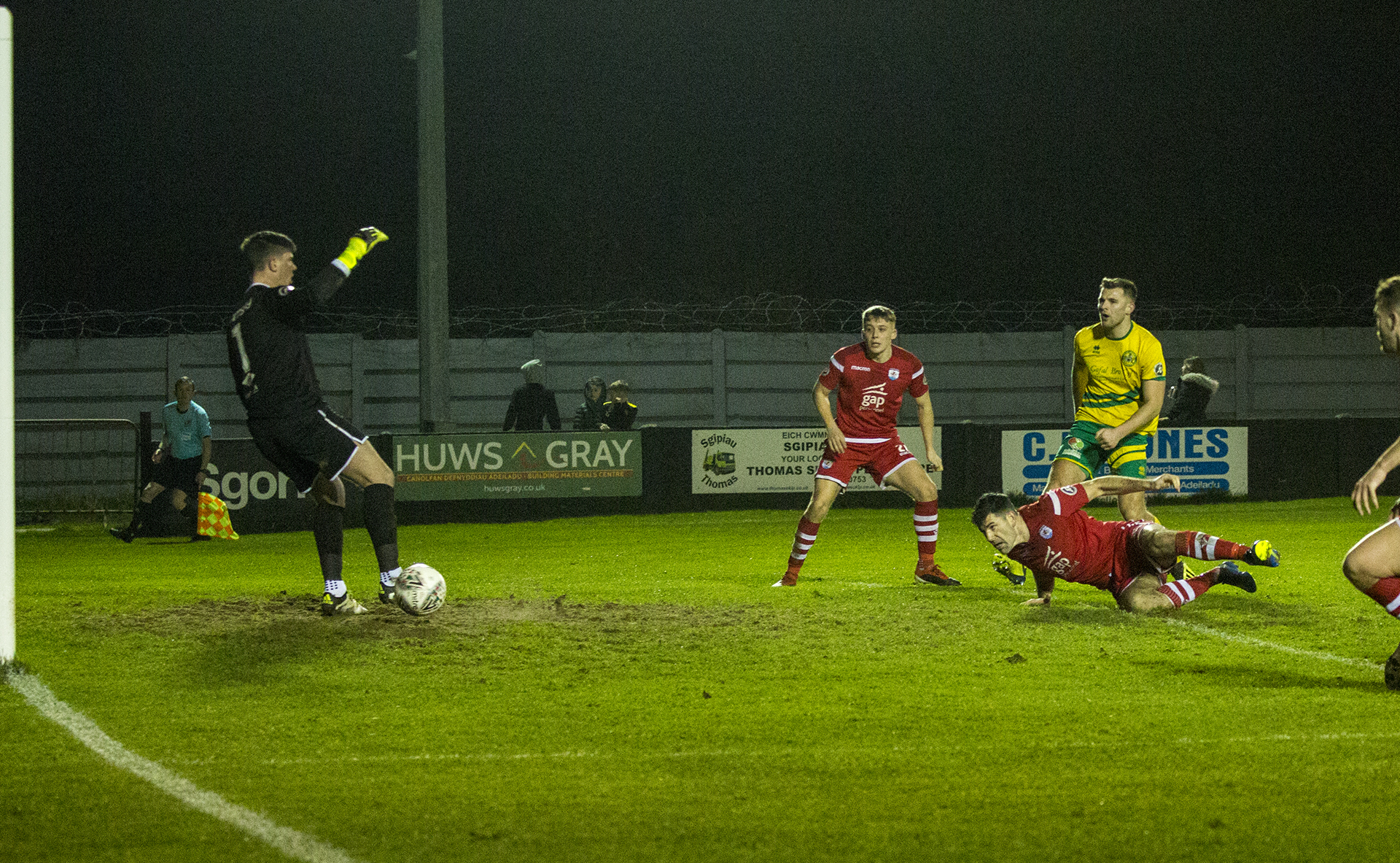 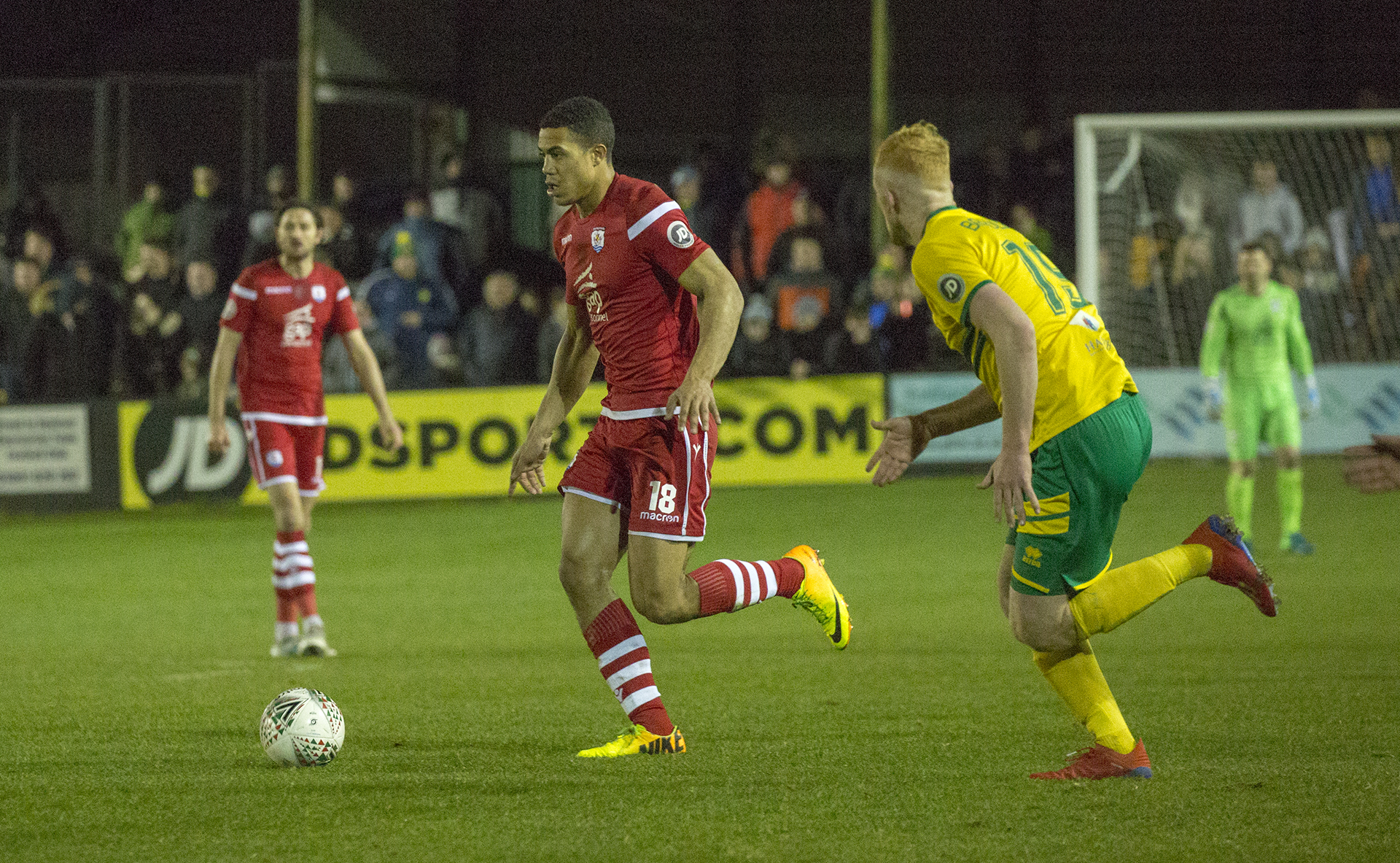 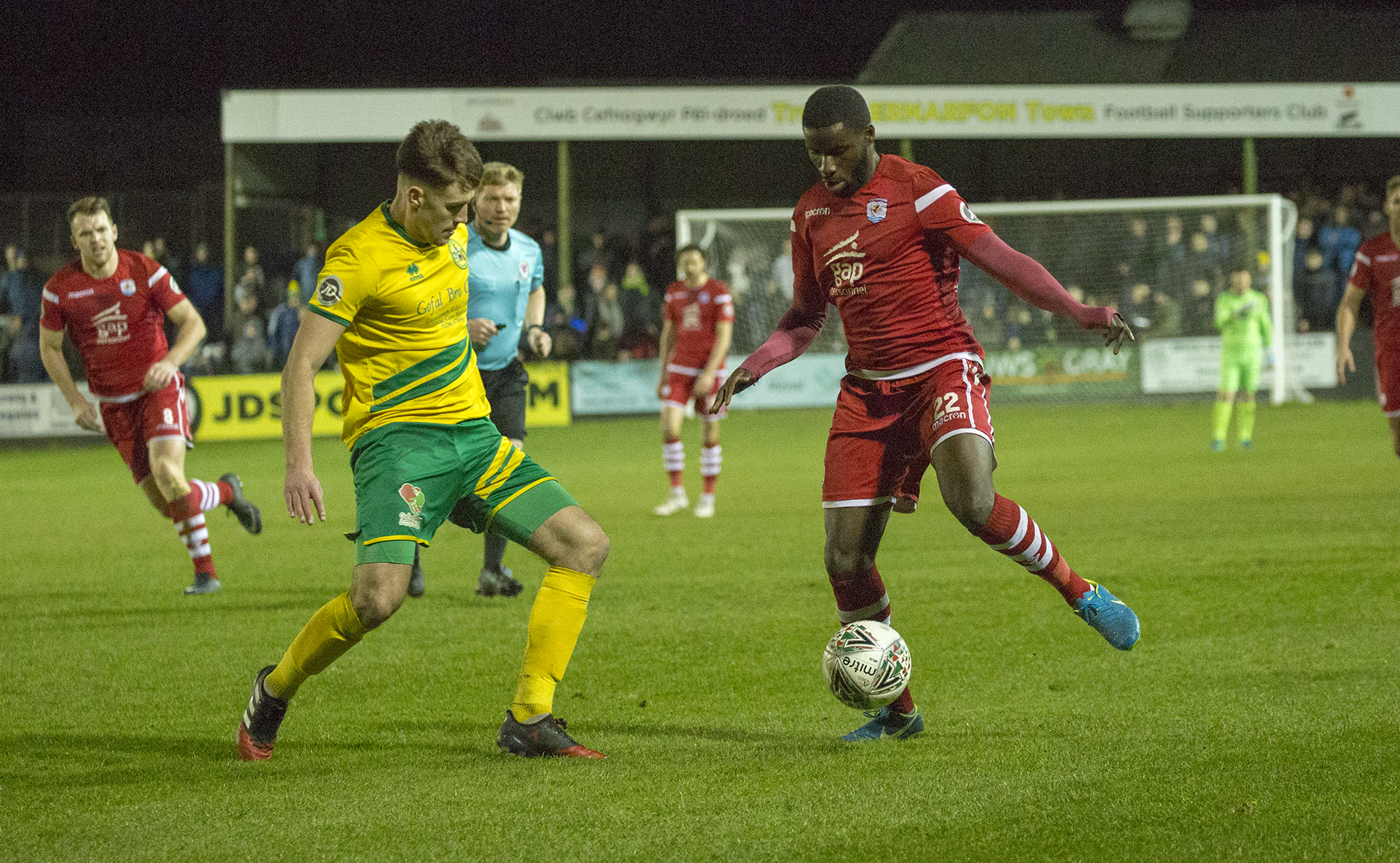