Connah's Quay Nomads became the 2018/19 JD Welsh Cup runners up after losing 3-0 to The New Saints in the JD Welsh Cup final on Sunday at Cefn Druids' The Rock stadium.

Despite a battling performance, goals from Greg Draper and Ryan Brobbel sealed a cup win for The New Saints.

It was the Nomads' last fixture of the 2018/19 season, with only a short break to follow before preparations began for their fourth consecutive Europa League qualifying campaign in June.

They came into the game after facing TNS in the final game of the JD Welsh Premier League campaign, with only a Greg Draper penalty separating the sides in a tight affair at Park Hall.

The New Saints started a similarly strong squad, with the likes of Jon Routledge and Jamie Mullan starting, and golden boot winner Draper leading the line for the Saints.

The first chance of the affair went to TNS in the 4th minute, when Routledge dribbled into the Nomads' area and crossed to Brobbel who headed just wide.

But just two minutes later, the Saints made no mistake, when after a cross from Marriott saw Cieslewicz have a shot blocked by Danby, Draper followed up to send the rebound in from close range.

Although they trailed early on, the Nomads went onto have a strong first half with good moves into the TNS end engineered by the likes of Disney, Michael Bakare, and Callum Morris.

They had a good chance in the 14th minute, when from a Bakare cross, Morris had a shot blocked from eight yards out which won a throw in near the TNS area for Danny Holmes to send in.

Holmes used his long throw ins to target the Saints' end throughout, with throws in the 15th and 18th reaching the TNS area only to be cleared away by the defence.

In the 20th minute there was controversy as Nomads saw a possible penalty claim denied when Michael Wilde was brought down on the edge of the TNS area.

David Morgan waved Nomads' appeals away, leading to a 10 yard effort from Jay Owen deflecting into the six yard box, where Wilde went down for the second time before play was halted for an offside against Nomads.

In the 24th minute The New Saints won a free kick, but Nomads won possession back and went on a break led by Bakare and Insall, with Bakare starting the move before overlapping to receive the ball back from his team mate only to see Kane Lewis win the ball back to stop the Connah's Quay attack.

Greg Draper looked to add his goal tally in the 27th as he pounced on George Horan with possession alone in the Nomads' area, but the Quay captain coolly dealt with it by playing the ball back to Danby.

Although the Nomads were building their momentum, they were dealt with a blow on 31 minutes when Ryan Brobbel made it 2-0. From a 25 yard out free kick, he floated the ball over the area and into the goal to extend his side's lead.

Michael Bakare tried to reduce the deficit in the 36th when Nomads were awarded a free kick on the edge of the area, and went close as his effort, which looked destined for the top left corner, was pushed away by keeper Harrison.

The Nomads continued to push for a goal before the break, but were forced to go in at half time trailing 0-2 despite a professional performance. Andy Morrison rung his first change in the dressing room, replacing Michael Bakare with Ryan Wignall.

Nomads came out after the interval in hunt of the all important next goal of the game, and wasted no time in looking for it with Jamie Insall sending a glancing header across the face of goal from a Callum Morris cross on 45 minutes.

A minute later, Insall flicked a header onto Michael Wilde, who with an outstretched effort from six yards out sent the ball just wide of the TNS goal, with John Disney sending a shot wide from a 48th minute corner after a sustained period of pressure from Nomads to open the second half.

In the 55th minute, John Danby made an important save against Brobbel, who sent a 12 yard effort towards goal which was well stopped to deny the in-form midfielder.

Just a minute later, Michael Wilde found himself with the ball around 10 yards from goal but couldn't fully connect with it, allowing TNS defenders to swarm into the box and win back possession.

In the 61st minute TNS were awarded a free kick, with Ryan Brobbel once again stepping up to score directly from the set piece. The kick, from around 30 yards out, sailed straight into the Nomads' goal in similar fashion to Brobbel's first half strike.

With Nomads now facing a massive challenge to get back into the game, they rushed into the TNS end, seeing a potential penalty appeal denied in the 64th when Jamie Insall was brought down as he ran onto a ball in the area.

The pressure from Nomads continued as Morris tested Harrison from 12 yards in the 67th, winning a subsequent corner which was followed by Nomads' second substitution which brought on Andy Owens in place of Insall.

With 72 minutes played, Ryan Brobbel lined up another free kick for TNS from 25 yards out, but this time it was crossed to Hudson who headed wide.

As the game entered its final 15 minutes, Nomads were winning multiple corners, but went without their much needed goal as time began to run out for Andy Morrison's men.

They were dealt what would prove a clinical blow in the 80th minute, when Andy Owens was shown a second yellow for simulation to leave Nomads fighting out the rest of the cup final with 10 men.

And they continued to battle for the remainder of the game, with Danby denying a close range effort from substitute Dean Ebbe in the 84th minute.

Nomads final change of the cup final came in the 88th, when Jay Owen was replaced by Adam Barton who played for the final two minutes of normal time and an additional three minutes of injury time.

Full time confirmed victory for the The New Saints, with the Nomads' disappointment at losing the final dwarfed by their record breaking season which had yielded record goal and points tallies, a history making run to the Irn Bru Cup final, and their best ever attendances.

The Nomads now enter the close season but will return to action in the Europa League preliminary qualifying round in June. 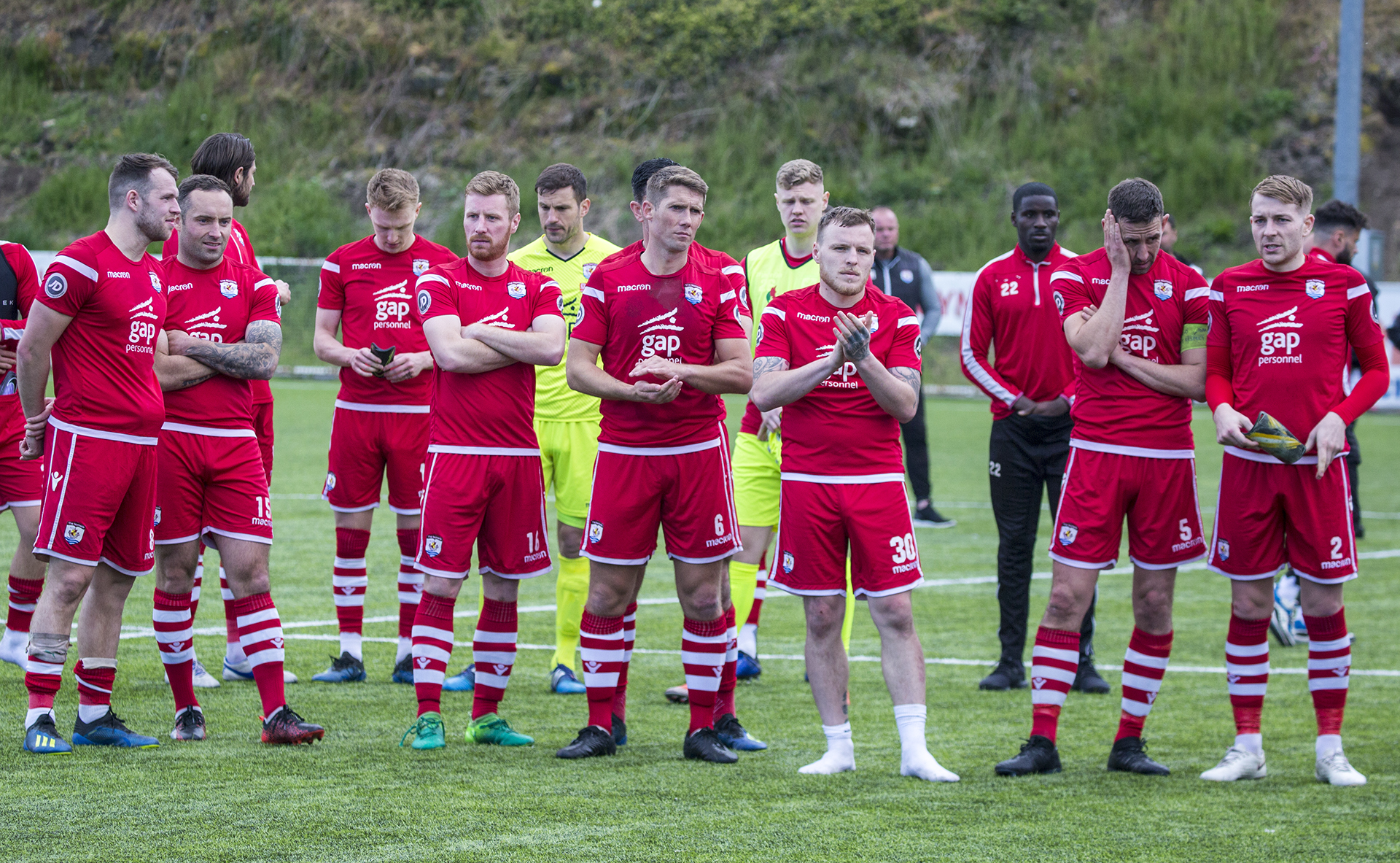 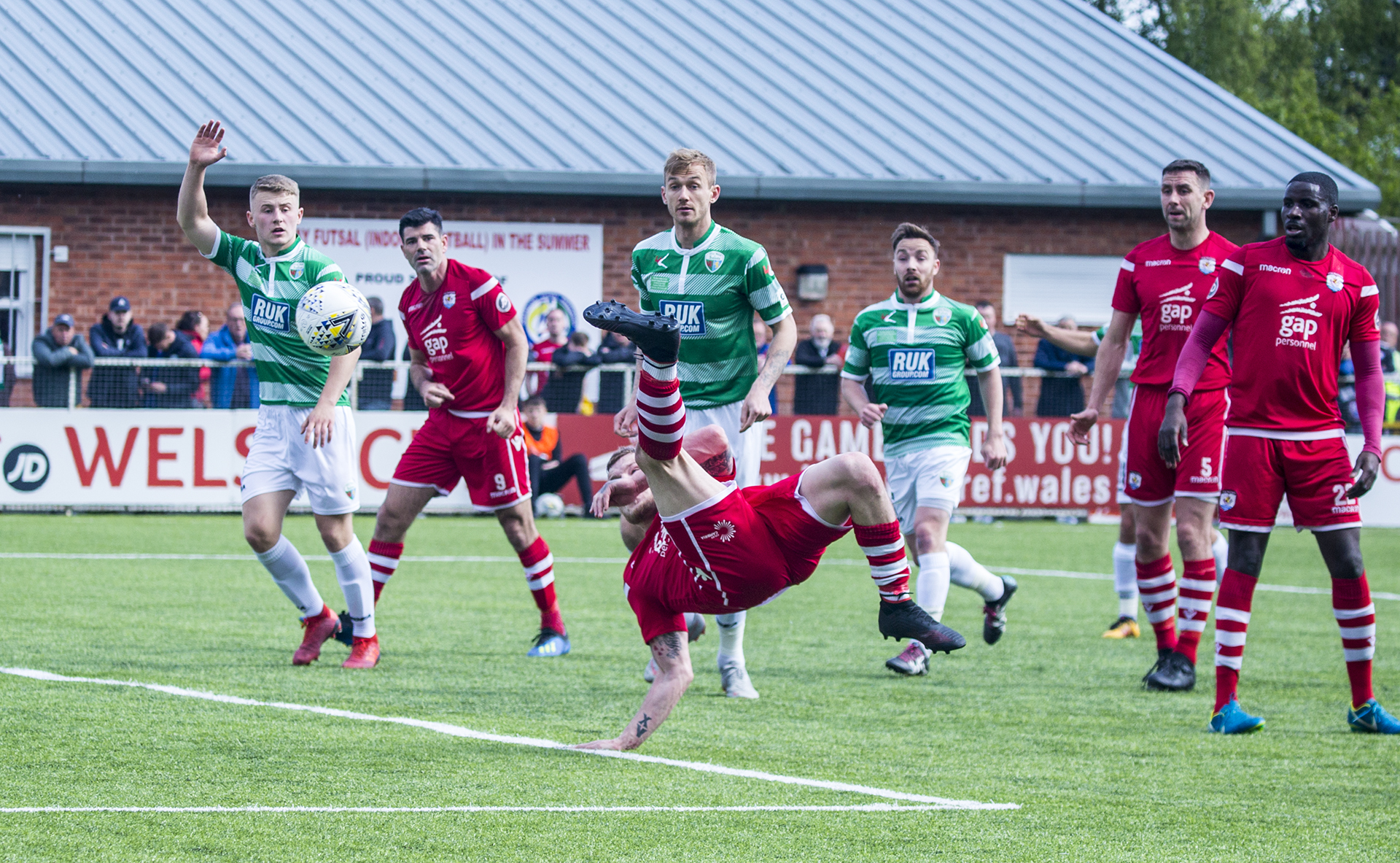 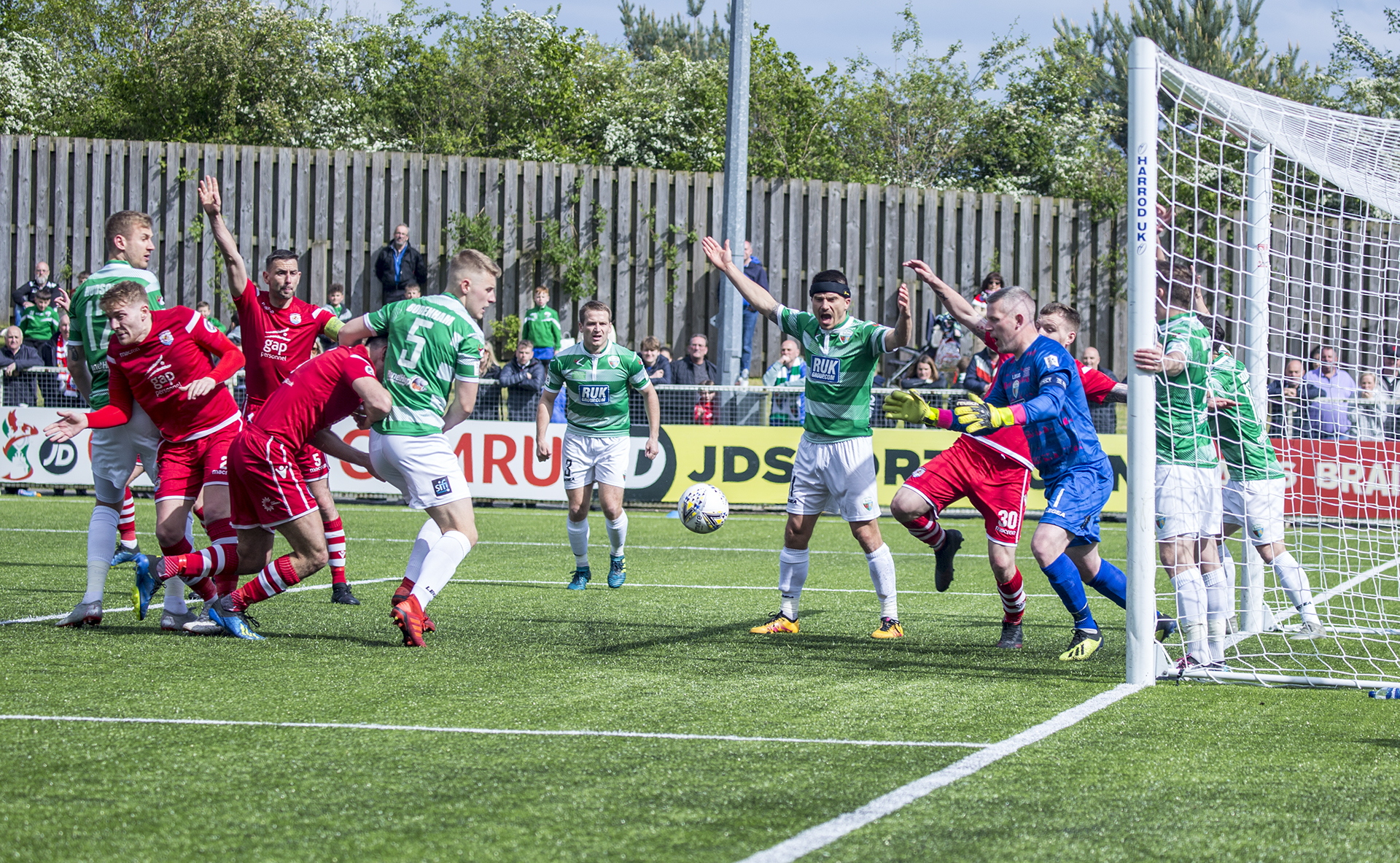 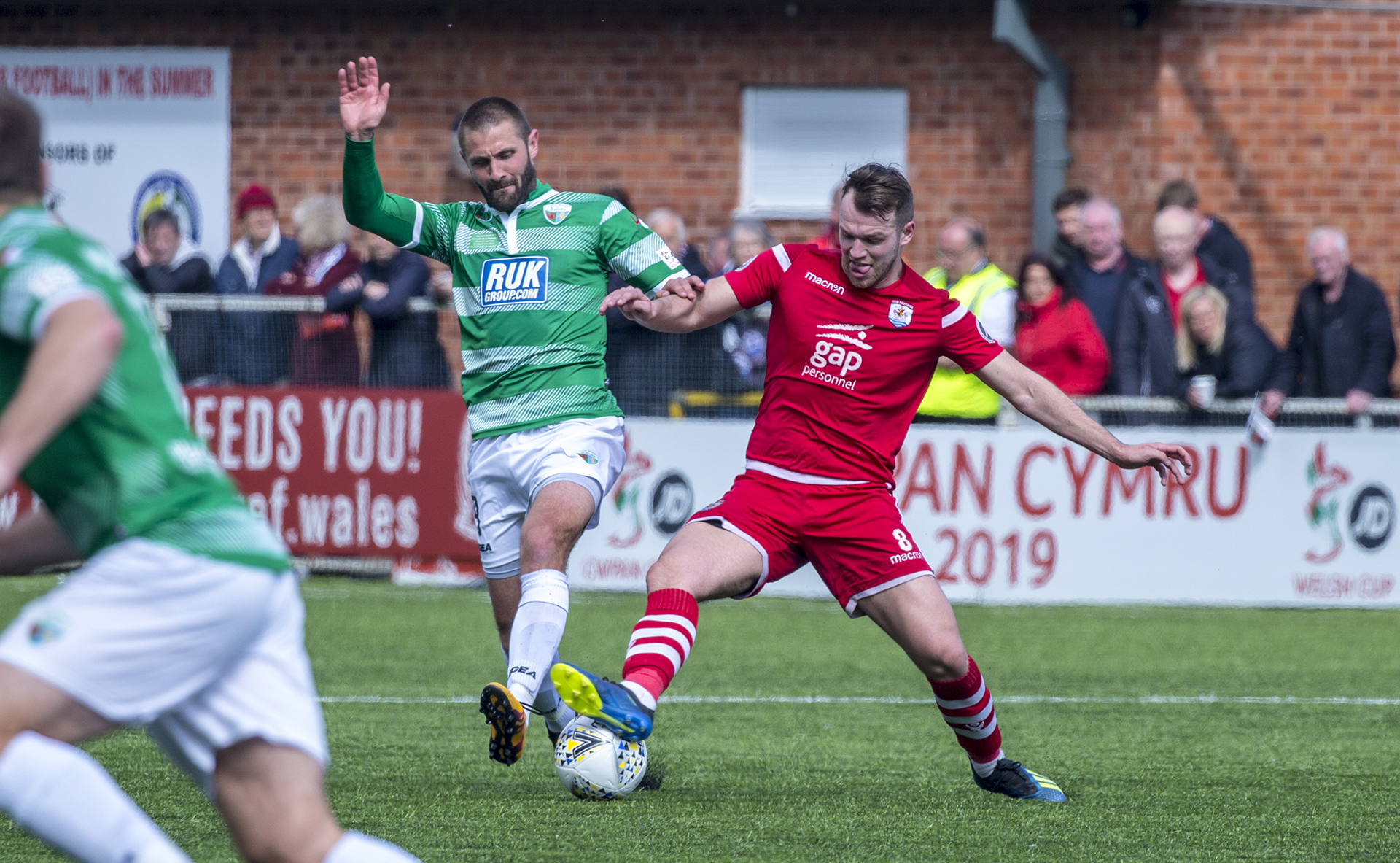