Connah's Quay Nomads lost by two goals to one against Scottish Premier League outfit Kilmarnock in the Europa League first qualifying round at Rhyl's Educate Group stadium on Thursday evening.

A 76th minute own goal sent The Nomads ahead, but an 81st minute penalty from Eamonn Brophy followed by a 91st minute winner via Stuart Findlay handed Killie a last gasp victory on the European stage.

The game was widely anticipated amongst both Welsh and Scottish football fans, with Nomads entering the Europa League for the fourth consecutive time, and Kilmarnock making club history with their first European game in 18 years.

Both sides had been preparing for the fixture since May, with Andy Morrison signing Wales C international and left back Callum Roberts from Newtown, securing the re-signatures of the likes of Ryan Wignall and Nathan Woolfe, and handing first team contracts to academy graduates Conor Harwood, Jacob Barratt, and Tom Weir.

Both men were named on Alessio's bench, as he opted to start keeper Jamie MacDonald and captain Gary Dicker with Eammon Brophy leading the line for Killie.

Andy Morrison announced a line up full of household names, many of whom had played in Nomads' first ever European tie against Norway's Stabæk in 2016. They included Callum Morris, Michael Wilde, and captain George Horan, whose defensive line included Roberts, who made his competitive debut.

The first action came just 30 seconds in, as Stephen O'Donnell combined with Brophy in the Nomads' final third to win a corner which was cleared by the Connah's Quay defence.

The visitors kept the pressure on in the opening stage, winning two free kicks and a corner within the first five minutes which were duly defended by Andy Morrison's men.

With 10 minutes played Kilmarnock had seen a lot of possession but without creating a clear goalscoring opportunity, with Nomads battling to get into the opposition's half through Declan Poole and Michael Bakare's pacy runs on the right wing.

The following ten saw much of the same, with Connah's Quay keeping their disciplined defensive shape to deny Alessio's side clear sight of goal.

In the 20th it was Nomads who were attacking, when Declan Poole won a throw in deep in the Kilmarnock area which was sent long by Danny Holmes but cleared away.

Nomads then won a corner in the 23rd which was sent close to goal by Jay Owen, but it was cleared by Kilmarnock who quickly countered. Alan Power received the ball and sent Brophy through on goal, but his shot from around 18 yards out was blocked after great tracking back from Danny Holmes.

After a John Disney throw in couldn't connect with Declan Poole up top, Kilmarnock piled on the pressure after the half hour mark with Brophy breaking through in the 33rd minute to send a low shot glancing across the right post.

In the 35th minute Killie's attacking continued with a corner ball triggering a scramble in the area which eventually saw the ball go safely out for a goal kick.

As half time neared the Nomads remained tight on Kilmarnock to deny them clear chances, with Lewis Brass catching a free kick sent into his area in the 42nd.

Two minutes later they launched their last move of the half, passing well inside the Nomads end but sending the eventual shot on goal tamely to the goal where Brass collected.

After two additional minutes half time was signalled by Belgian referee Erik Lambrechts, leaving Nomads to reflect on an encouraging first 45 minutes in which they had held their own against the highly athletic Kilmarnock.

The restart saw the game continue to play out in a similar way, with Nomads battling hard to deny Kilmarnock from showing attacking flair close to Lewis Brass' goal.

After pressure on the Connah's Quay goalmouth from the likes of Dominic Thomas and Chris Burke in the 50th minute, Kilmarnock went the closest they'd been in the game so far via a corner kick in the 58th.

From the corner, a Killie shot took a wicked deflection and went towards the top left corner of the Nomads' goal, but Brass pulled off a fantastic save to deny them the opener.

As the hour mark approached, Connah's Quay kept up their frustration of the travelling Scotsmen, who were regularly getting into the final third but without finding their much sought-after goal.

But in the 76th minute, the game was turned on its head when Nomads took the lead. From a low Roberts cross which found Wilde, the ball ricocheted off Greg Taylor and went into the net as he tried to clear the ball.

The Nomads now led 1-0 in front of a stunned crowd, and were on the front foot, with Bakare going on a rapid run at goal in the 78th, reaching the penalty area before having the ball swept from his feet by GK McDonald.

In the 80th minute Kilmarnock were rushing into the Nomads' area in search of an equaliser, and it came through a penalty kick after referee Lambrechts pointed to the spot for a challenge from Roberts.

Star striker Brophy stepped up and slotted into the centre of the goal to send the score level once again on 81 minutes.

Kilmarnock kept their presence in the Nomads' final third for much of the rest of the first leg tie, playing multiple low balls into the area as well as sending a header towards goal via Brophy which was saved by Brass, who had put in a stellar performance for Nomads.

With the 90 minutes up at Rhyl, only two minutes of additional time remained, but in the 91st Kilmarnock snatched a late winner after winning a corner ball. From Chris Burke's delivery, Stuart Findlay rose high in the area to send a header into the net to secure a dramatic 2-1 victory.

Despite the first leg loss, Nomads have plenty to play for next week at Rugby Park as they travel to Scotland very much in the tie and off the back of an impressive performance in which they matched their Scottish Premier Football League opponents for much of the game.

The second leg kicks off next Thursday 18 July for a 7:45pm kick off with live Twitter commentary available on the Nomads' Twitter feed. 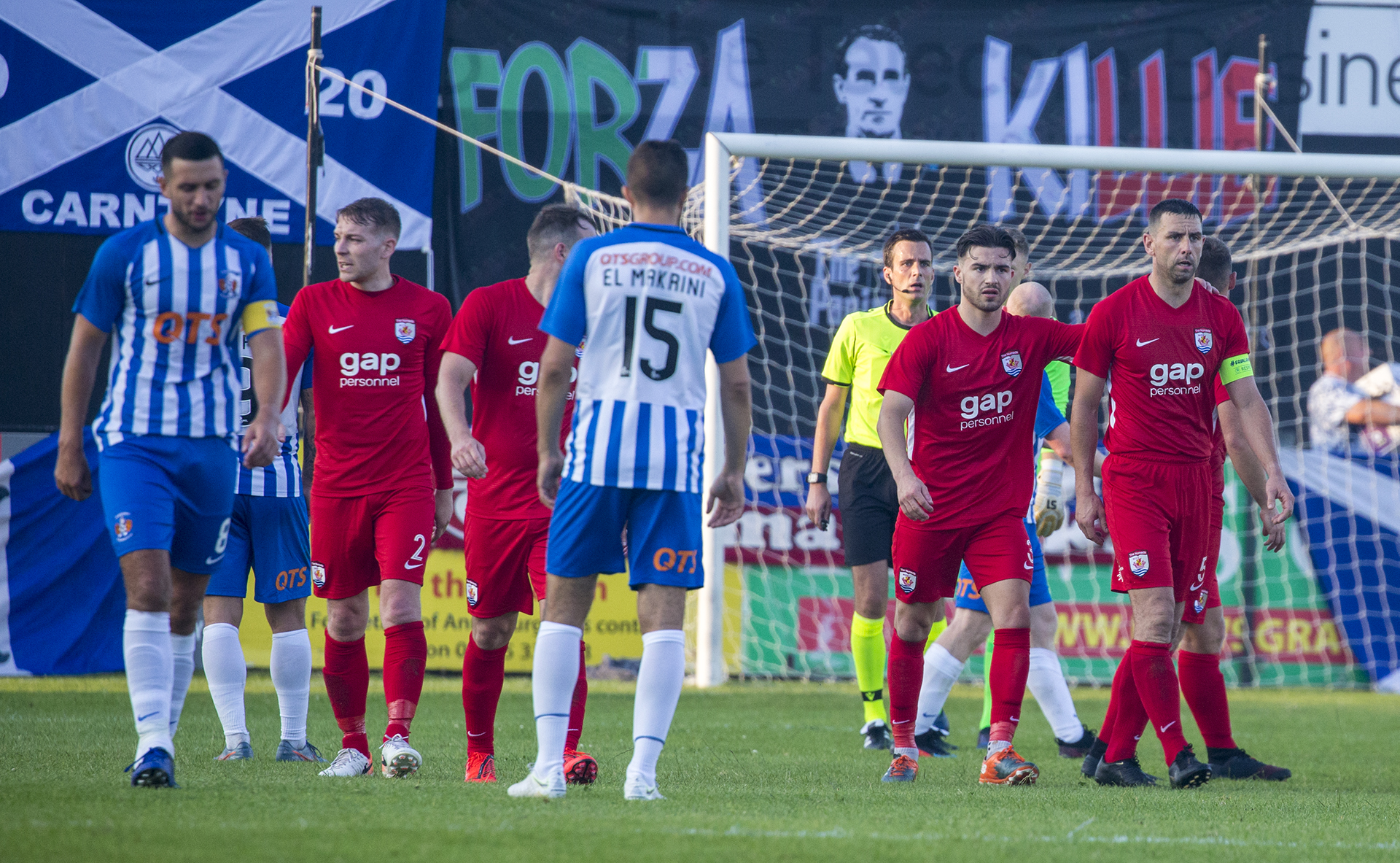 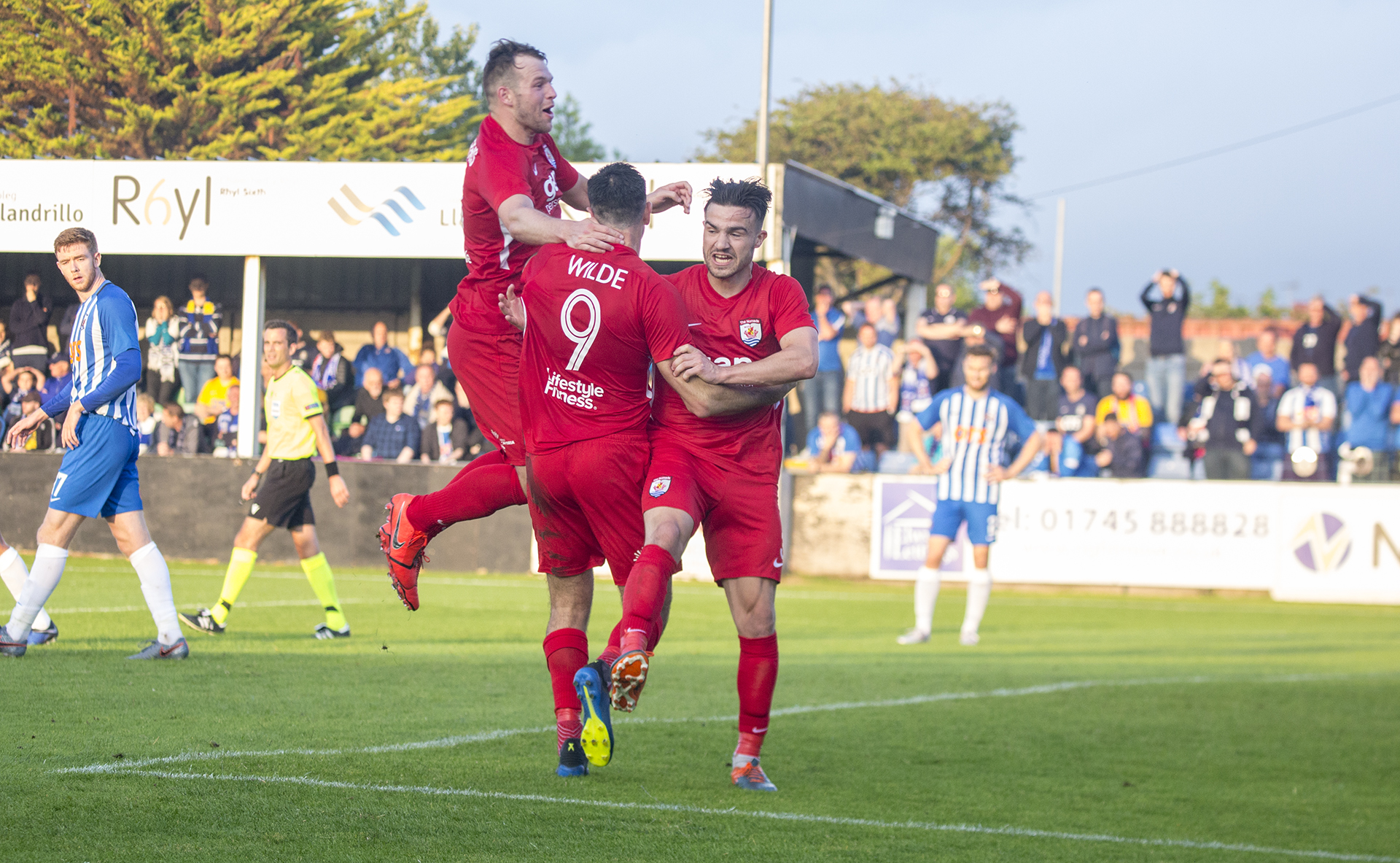 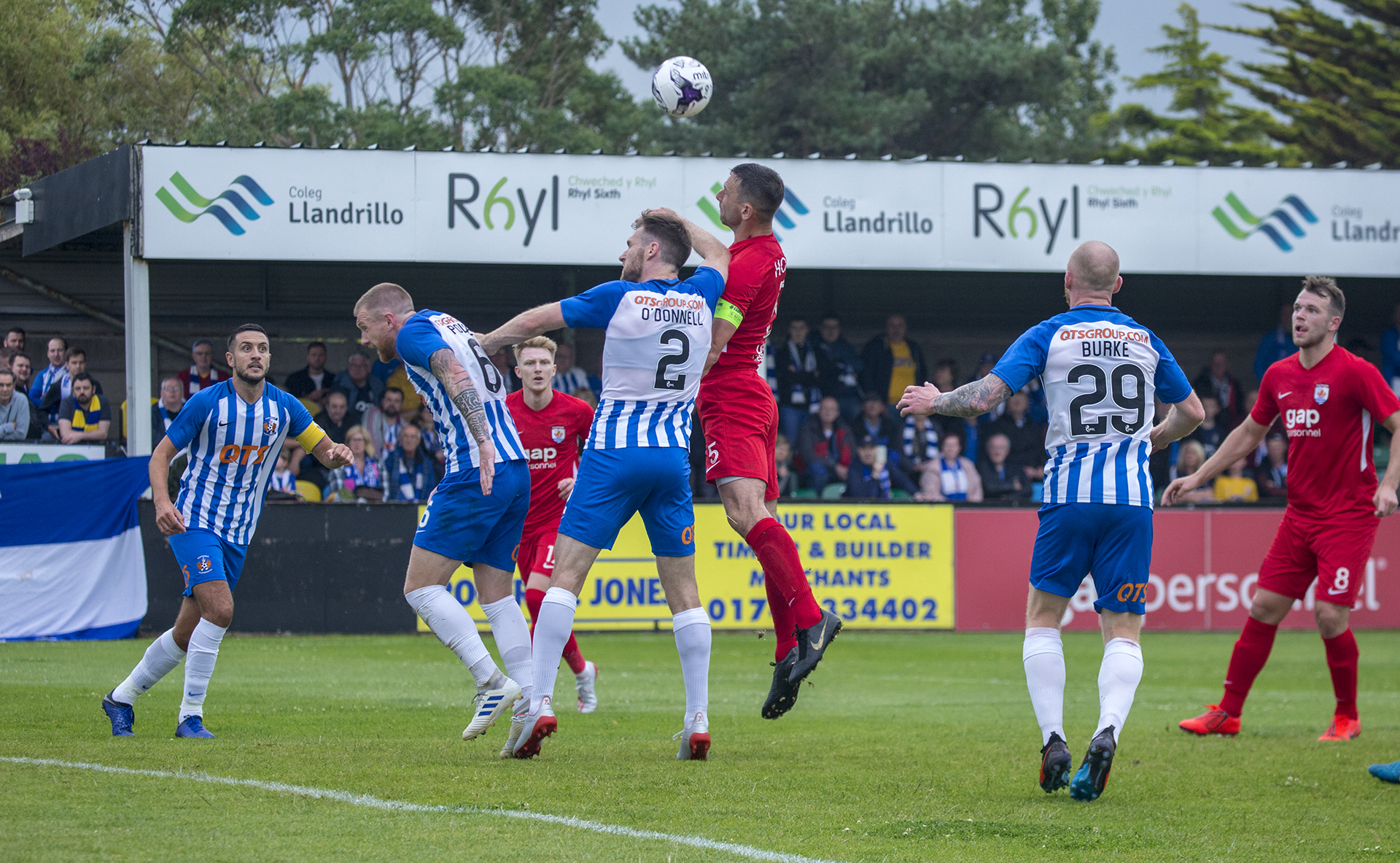 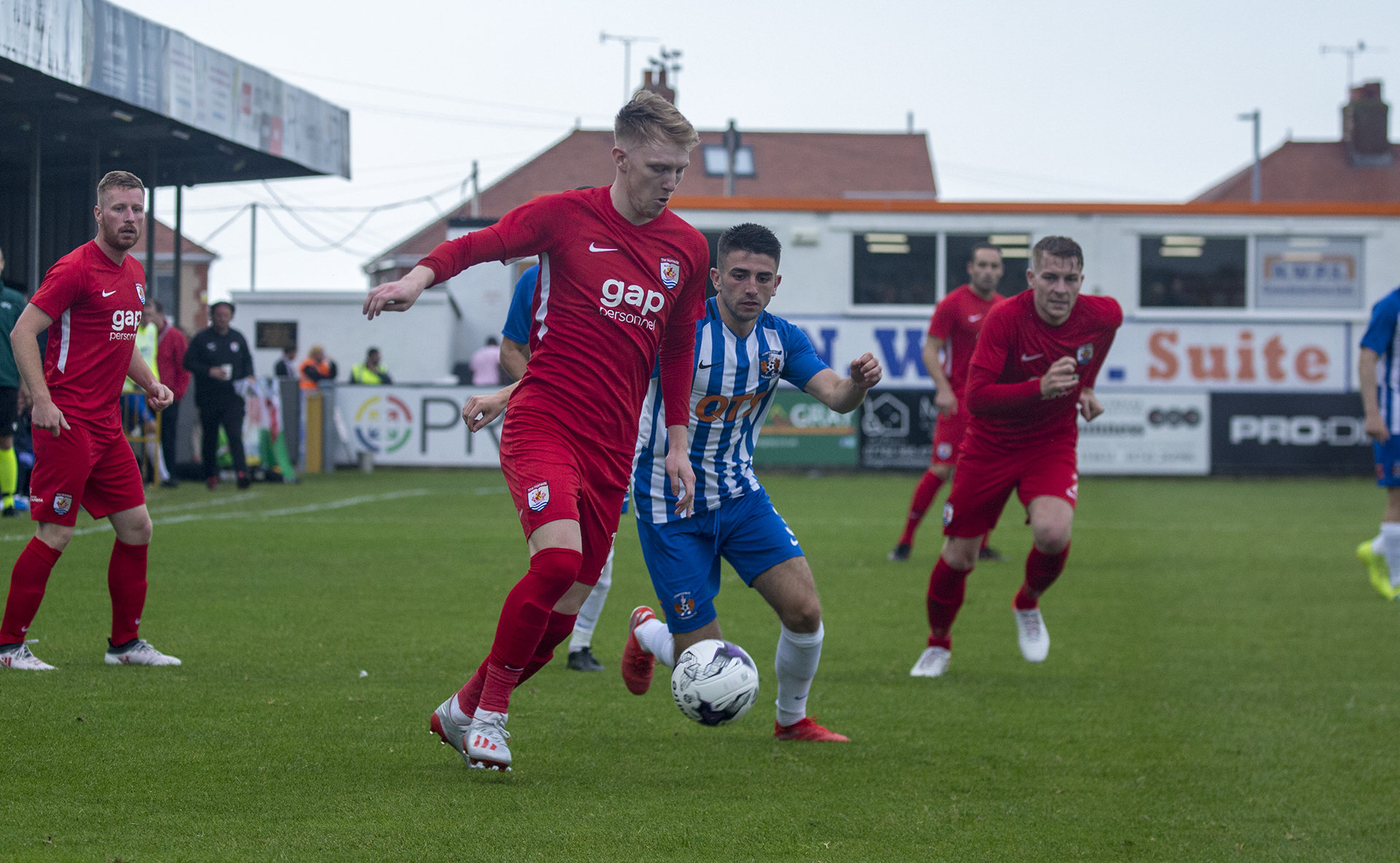 Declan Poole gets behind the Kilmarnock defence | © NCM Media 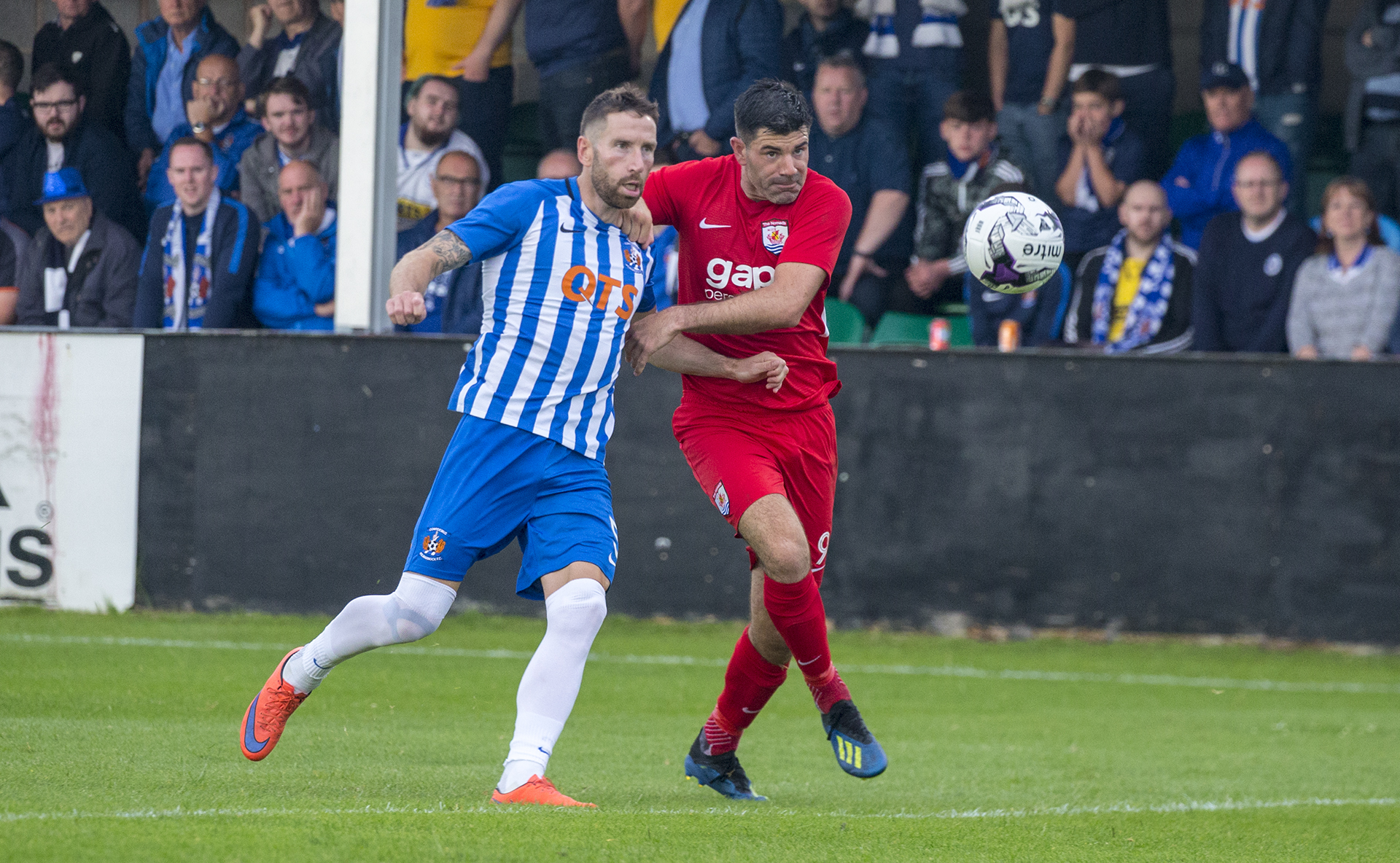