Connah's Quay Nomads played out a 0-0 draw with Caernarfon Town on Friday evening at The Oval in the JD Cymru Premier.

Despite a missed penalty for the hosts and multiple chances for Nomads, the spoils were shared in North West Wales.

The game followed Nomads' JD Cymru Premier opener at Deeside last Saturday, which saw them play out a 1-1 draw against Cardiff Met with Jamie Insall netting for Connah's Quay in his first goal for the club.

They were looking to get off the mark with a win against Caernarfon Town, who had proved worthy opponents in the 18/19 season after defeating Nomads 1-0 both home and away in phase two and one respectively.

The Nomads forced a throw in and free kick within the first two minutes of the game, but neither created a chance despite their efforts to rise up in the area and head towards goal.

The first real threat came in the 5th, when a Woolfe cross was whipped close to the right post of the Caernarfon goal, with an outstretching Michael Wilde just missing the opportunity to have a shot from just four yards out.

Caernarfon replied with an attack of their own on 8 minutes, as Leo Smith dribbled through the Nomads area only to be tackled by Callum Roberts before shooting from six yards, with the resulting corner being cleared.

There was controversy in the 14th minute, when a Woolfe cross saw Disney hit the post at an angle after a handball claim for a penalty from Nomads was denied by referee Mark Petch, who later booked Andy Morrison for his protests from the side line.

The game had an even feel to it as Nomads' chances were quickly followed by Caernarfon's own, with Cai Jones getting goal side to drag a shot wide from just six yards in the 16th.

This pattern of a Nomads attack, followed by Caernarfon pressing forward, continued into the half, but as both stood up to each other's threat, it led to few clear goalscoring opportunities up until the 28th, when Lewis Brass did well to save a seven yard Edwards shot.

Caernarfon then failed to clear their lines in the 33rd minute, giving Wilde a chance to shoot, but his eight yard effort was held by Cofis' 'keeper Alex Ramsay.

The 40 minute mark came and although both sides were pushing for an opener, the half looked to be ending goalless, but this nearly all changed when Caernarfon were awarded a controversial penalty for a Callum Morris challenge on 42 minutes.

Leo Smith stepped up, but hit his effort off the left post, keeping the scores level at the break, and further motivating Nomads to take their chance to get in front first.

The first chance of the second half went to Nomads from a corner kick taken by Wignall, which went to Michael Wilde who sent it just over the crossbar with a bullet header.

Two more Nomads crosses went close in the 55th and 58th respectively, with Wilde just missing a Roberts cross, before a second delivery from the left back saw Insall head over at close range.

With half an hour to play the Nomads' ramped up their campaign for an opening goal which could well have proved to be the winner.

In the 63rd minute they won a deep throw in which led to two consecutive corners, with the latter seeing Jamie Insall just miss a chance to head a Wignall cross into the goal.

On 68 minutes, a great run into the area from Farquharson saw him have two shots, and Disney strike from the edge of the penalty area, but all were blocked inside a packed and chaotic Caernarfon area.

The Nomads then introduced Declan Poole in place of Jamie Insall to further boost their campaign for an opening goal, but with just 15 minutes to go the score remained goalless.

In the 78th, Caernarfon went agonisingly close when Jamie Breese broke through on goal and fired an effort just wide of the Nomads' left post.

A minute later, Lewis Brass sprung into action to keep at Leo Smith at close range as Caernarfon stepped up the pressure.

In the final ten there was an onslaught of attacks in the Cofi area by Nomads, which saw Disney head just over from a corner in the 83rd and a corner won in the 86th which was dealt with by the battling hosts.

With two minutes of normal time to play, the Nomads had multiple men in the Caernarfon area, which led to an in swinging cross from Roberts being well kept out by the palm of 'keeper Ramsay.

In injury time there was one more near-twist to the game, when Sam Jones sent a cross-come-shot narrowly wide of the Nomads' left post for the second time in the half.

Despite both sides' battling performance over the 90 minutes, they took a point each home at full time with the deadlock remaining unbroken.

The Nomads will next be in action in just three days' time, as they welcome Carmarthen Town to Deeside in the JD Cymru Premier for a 2:30pm kick off. 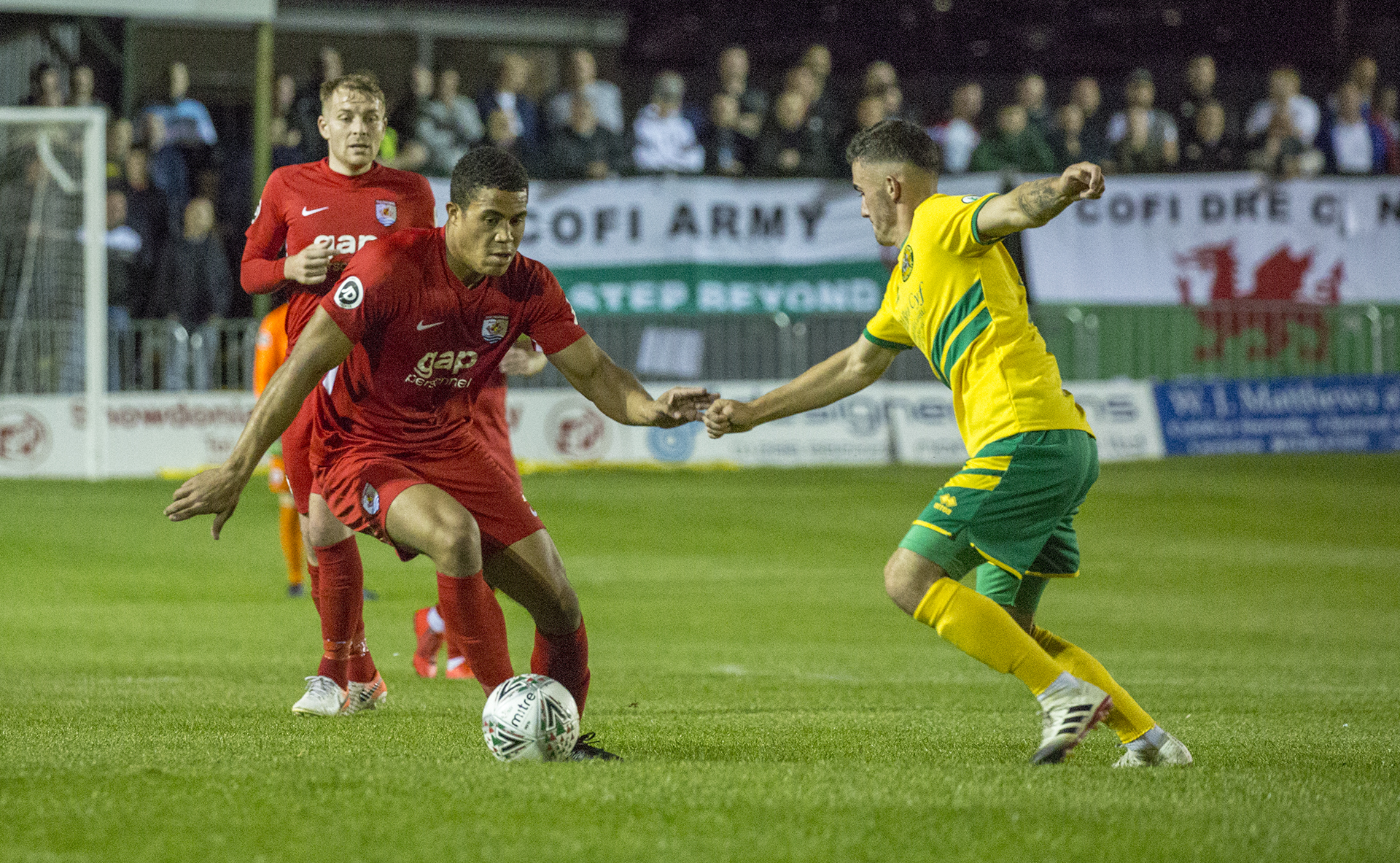 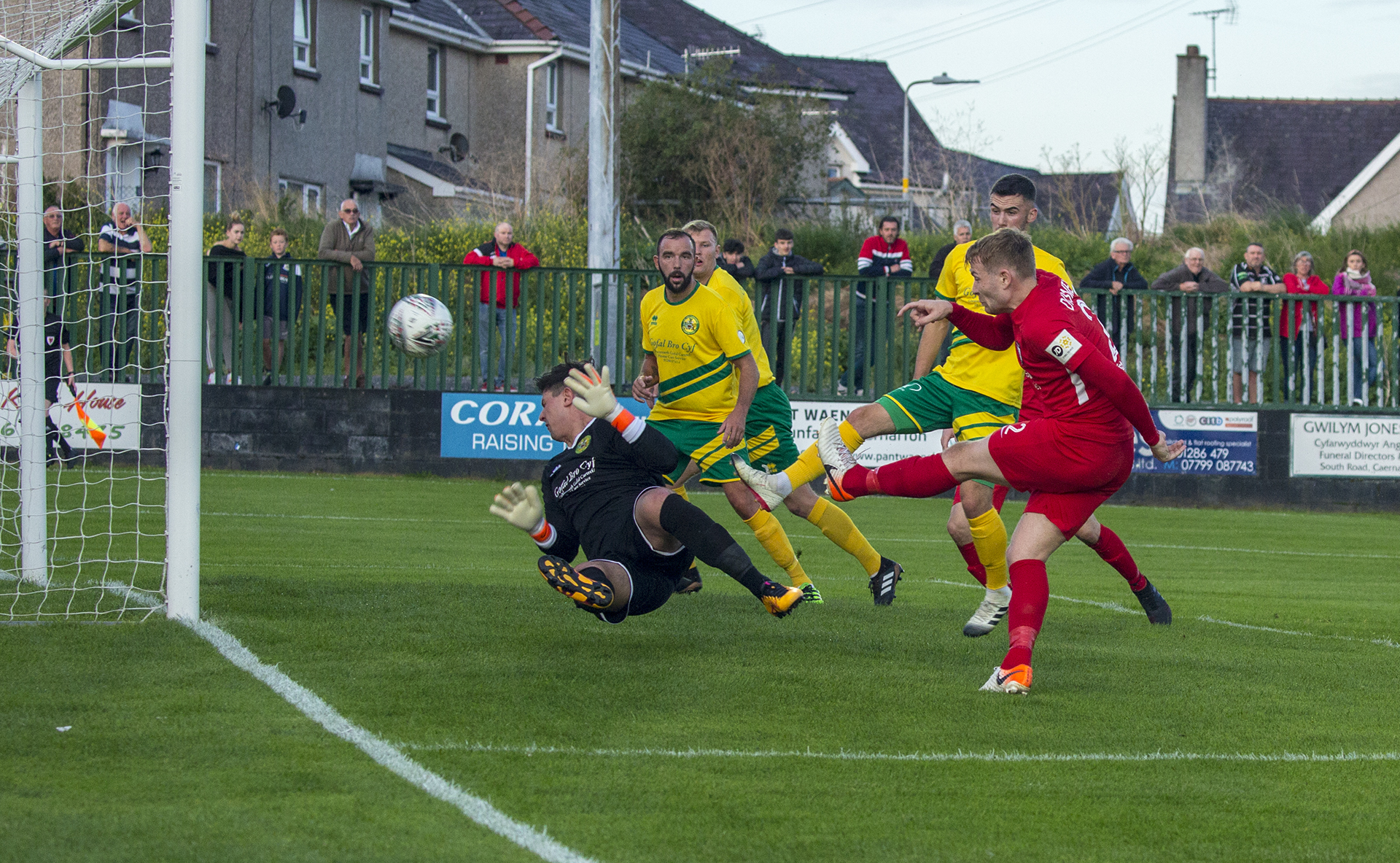 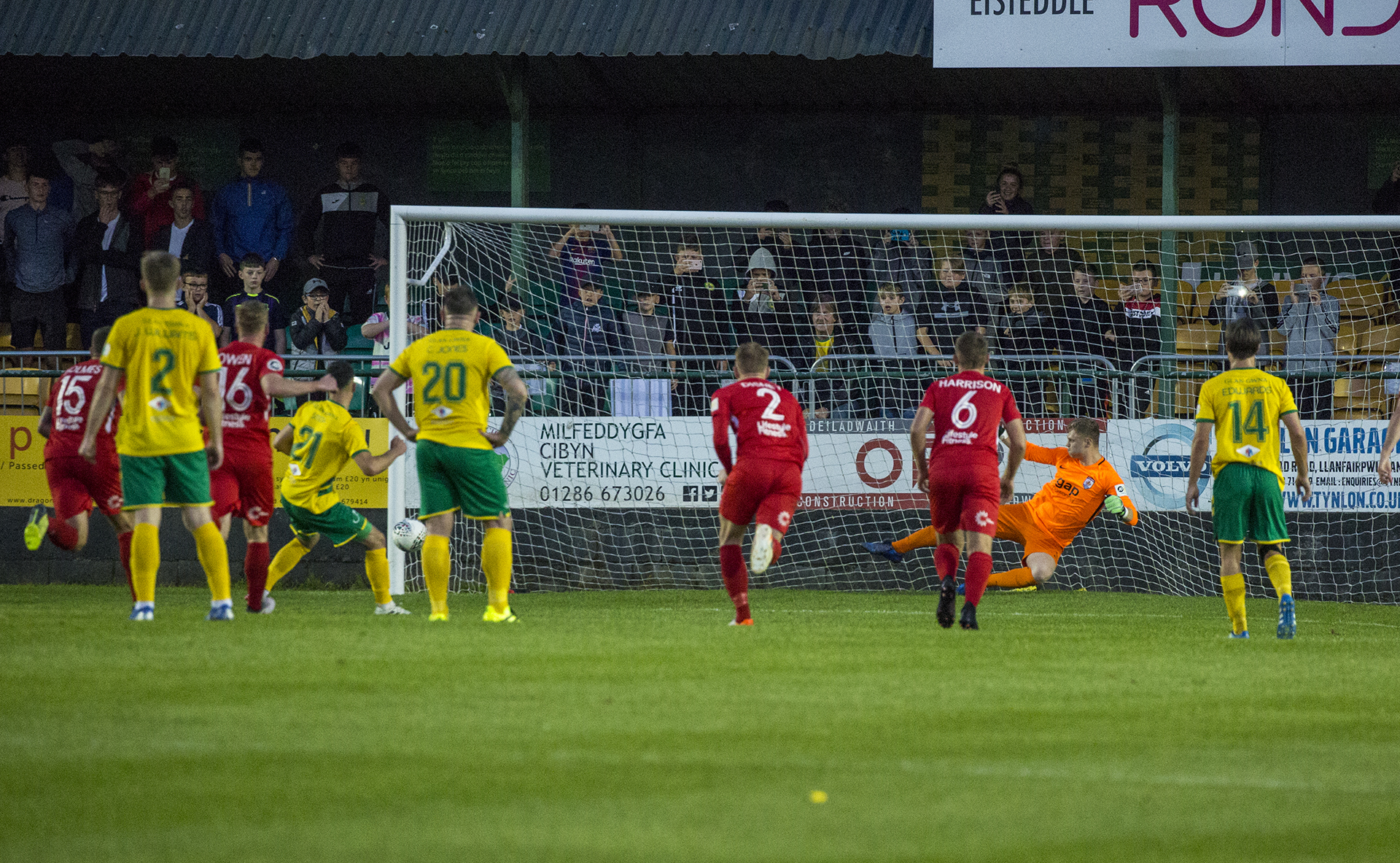 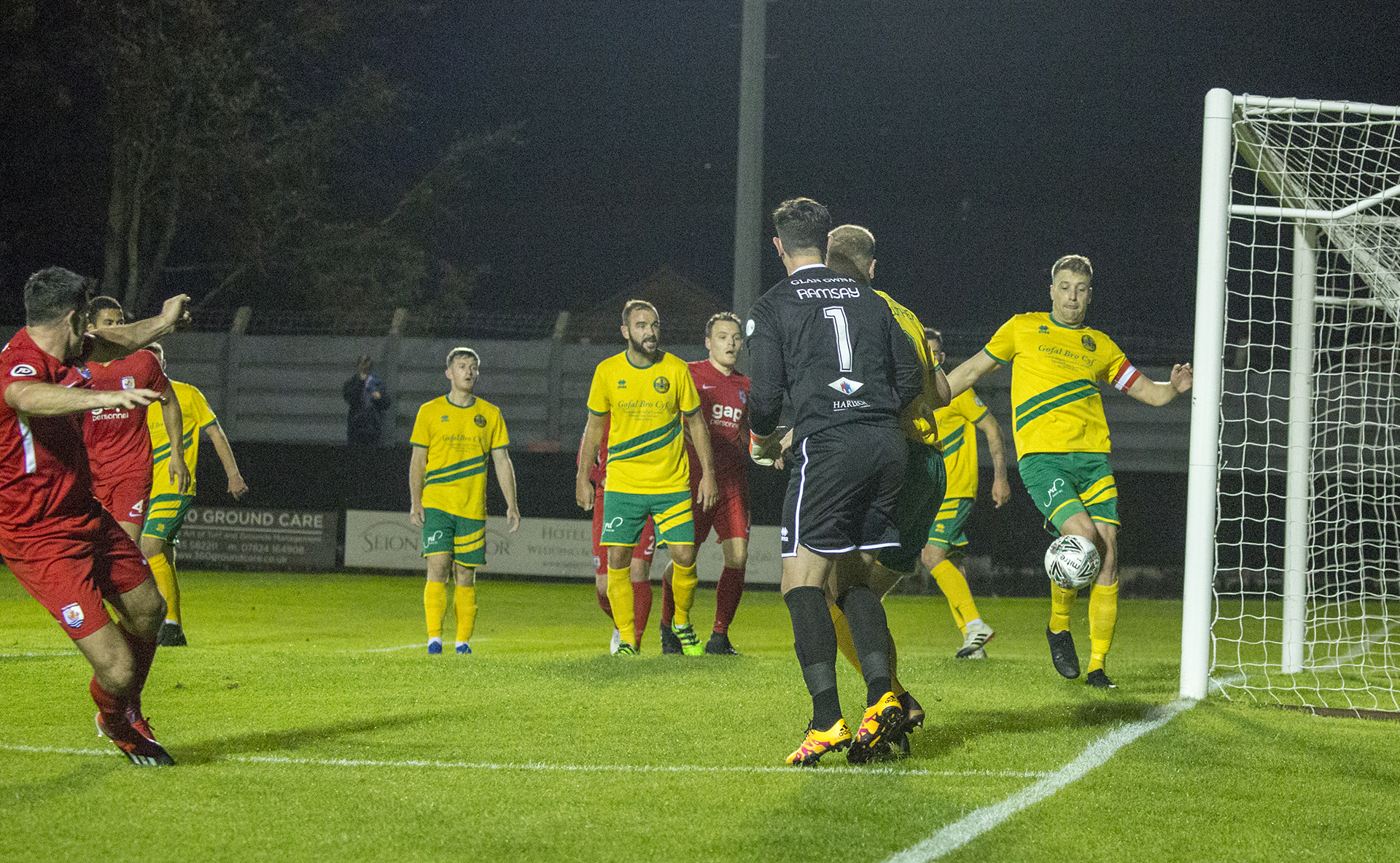 Michael Wilde's header is cleared off the line | © NCM Media 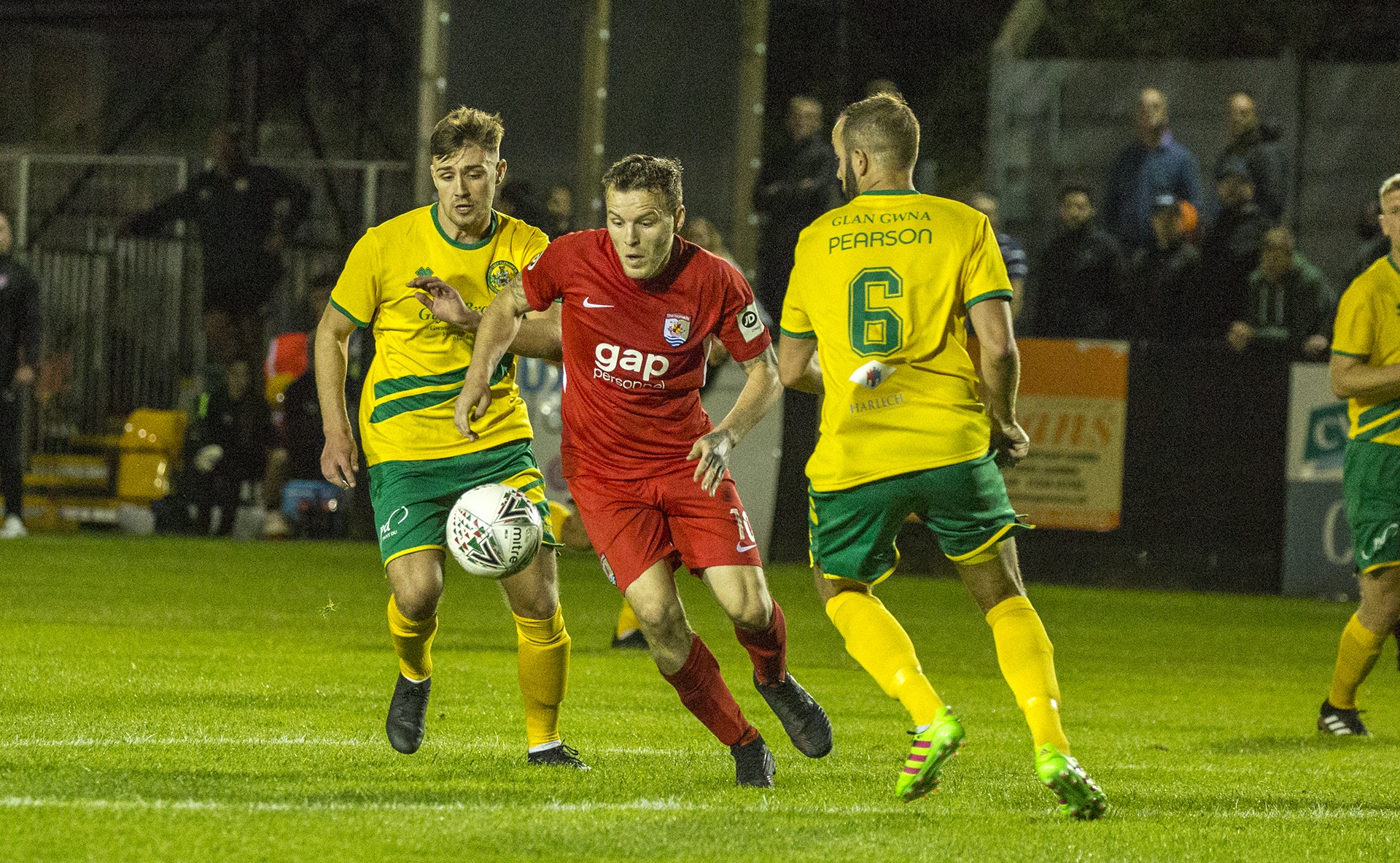 Jamie Insall looks to get beyond the Cofi backline | © NCM Media