A 52nd minute goal from Liam Thomas sent the visitors ahead, with a 70th minute strike from Callum Morris ensuring the spoils were shared at Deeside.

The Nomads were looking for their first win of the JD Cymru Premier season, following a 1-1 draw against Cardiff Met in the previous week, and a goalless stalemate at Caernarfon Town on Friday as part of the league's bank holiday double header.

Having gone close to winning both of those games, Andy Morrison made just one change, starting Ryan Wignall in place of Jamie Insall. Also in the line up was Priestley Farquharson, who impressed with his solid defending and surging runs forward against Caernarfon.

South Wales visitors Carmarthen were also looking for their first three points after enduring back to back losses against Aberystwyth and Newtown. Manager Neil Smothers opted to start the likes of Josh Bull, Lewis Harling, and stalwart striker Liam Thomas.

The Nomads established themselves early on in the game, winning a deep throw in and corner kick taken within the first three minutes, both of which were cleared by the Old Gold.

The likes of Woolfe and Wignall helped get the hosts into the Carmarthen area, with a powerful Wignall shot on nine minutes blocked by captain Lee Surman.

As the game approached the fifteen minute mark, Nomads were continuing to play to create chances, whilst Carmarthen had grown into the encounter, retaining more possession in the Nomads' area.

This was seen in the 19th minute, when John Disney made a last minute tackle to deny Liam Thomas a shot on goal after he went free into the area.

In the 27th, Woolfe was again looking for the opener with a 25 yard out strike which went just wide. Two minutes later he took a corner ball, but this was dealt with by the Carmarthen defence to ensure the deadlock continued into the 30th minute.

On 35 minutes there was a Nomads chance, as a Woolfe free kick, again from the 25 yard range, went to Wilde who sent a header over the bar from 10 yards out.

Despite both sides' will to score before the break, major chances were then few and far between up to the interval, leaving Nomads knowing they had to find a goal to break the stalemate.

As part of their efforts to achieve this, Jamie Insall was brought on to replace Ryan Wignall at half time.

But the second half got off to the worst start possible, as just seven minutes in, Carmarthen went in front via Liam Thomas, who appeared to have a Greg Walters shot from 20 yards out deflect off him and go in.

Despite protests of offside, the goal stood, leaving Nomads needing to turn the game around to get a result.

Andy Morrison rung the changes quickly with a double substitution, which brought on Michael Bakare and Declan Poole in place of Nathan Woolfe and Jay Owen.

This move had immediate impact, with Bakare going on a bursting run down the Carmarthen byline to win a free kick on the edge of the area in the 63rd, which although sent close to goal was cleared away.

In the 67th, it looked as if Nomads' goal was just not going to come, as they rushed into the Carmarthen area to see Roberts, Wilde, and Bakare have close range efforts, with two of them denied by a sublime double save from Idzi.

But on 70 minutes the equaliser finally arrived, as after Disney dribbled the ball into the area, Callum Morris got just enough on the ball at close range to equalise.

Following Morris' goal, the game had come alive as both sides knew the next goal was likely to be the winner. It was Nomads who had the better chances to grab it, with Bakare battling to send crosses and slick passes into the final third via the right wing.

One of the best opportunities came in the 83rd, when a Priestley Farquharson throw in went close to Insall who was near the Carmarthen goal mouth, but it evaded him and went to Idzi who collected for Carmarthen.

On 87 minutes, good work from Declan Poole and Callum Roberts saw Poole break through on goal only to be blocked from seven yards out.

As three minutes of injury time was awarded by the fourth official, all the momentum was with Nomads as they hunted a dramatic late winner.

A surging Danny Holmes run threatened in the 91st, before a free kick from 25 yards out looked to be Nomads' best chance of scoring. It was taken by Poole and collected by Idzi, before the final minute of the afternoon was played out to see the 1-1 draw confirmed at full time.

The Nomads now move onto a Friday night fixture away at Bala Town for a 7:45pm kick off before returning to Deeside for a Tunnocks Caramel Wafer Challenge Cup clash with Scottish League Two side Cove Rangers for a 5:15 kick off on Saturday 7 September. 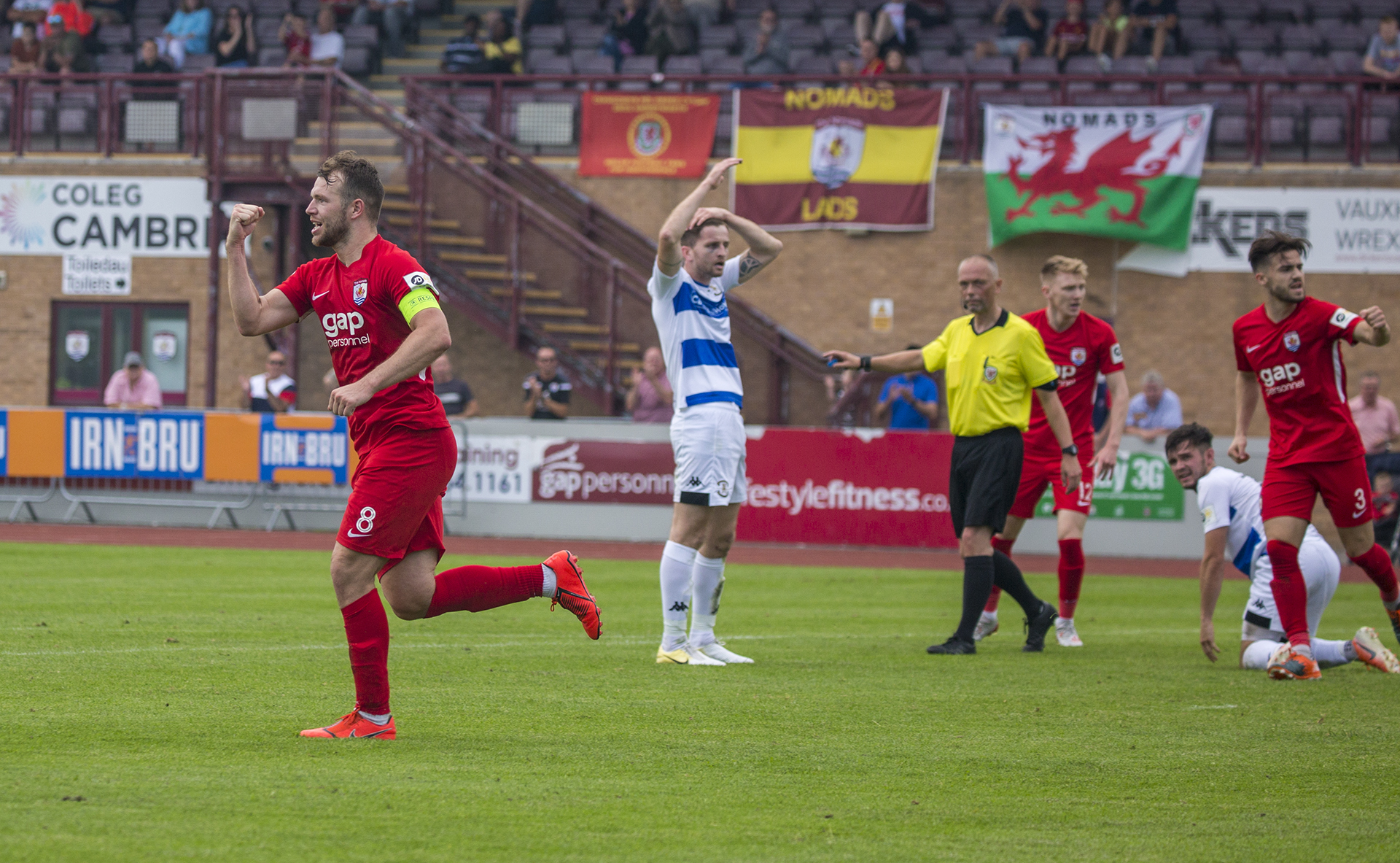 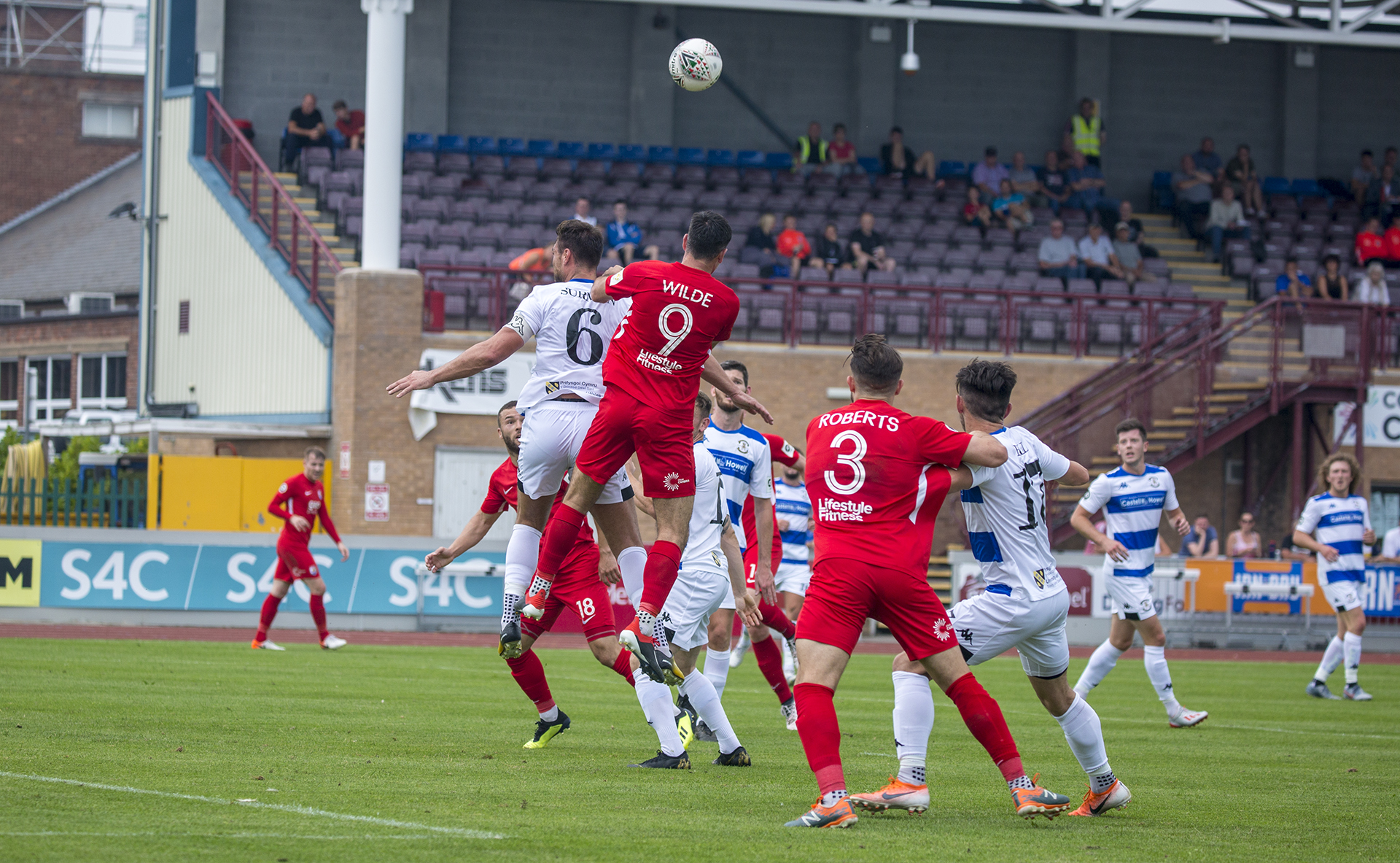 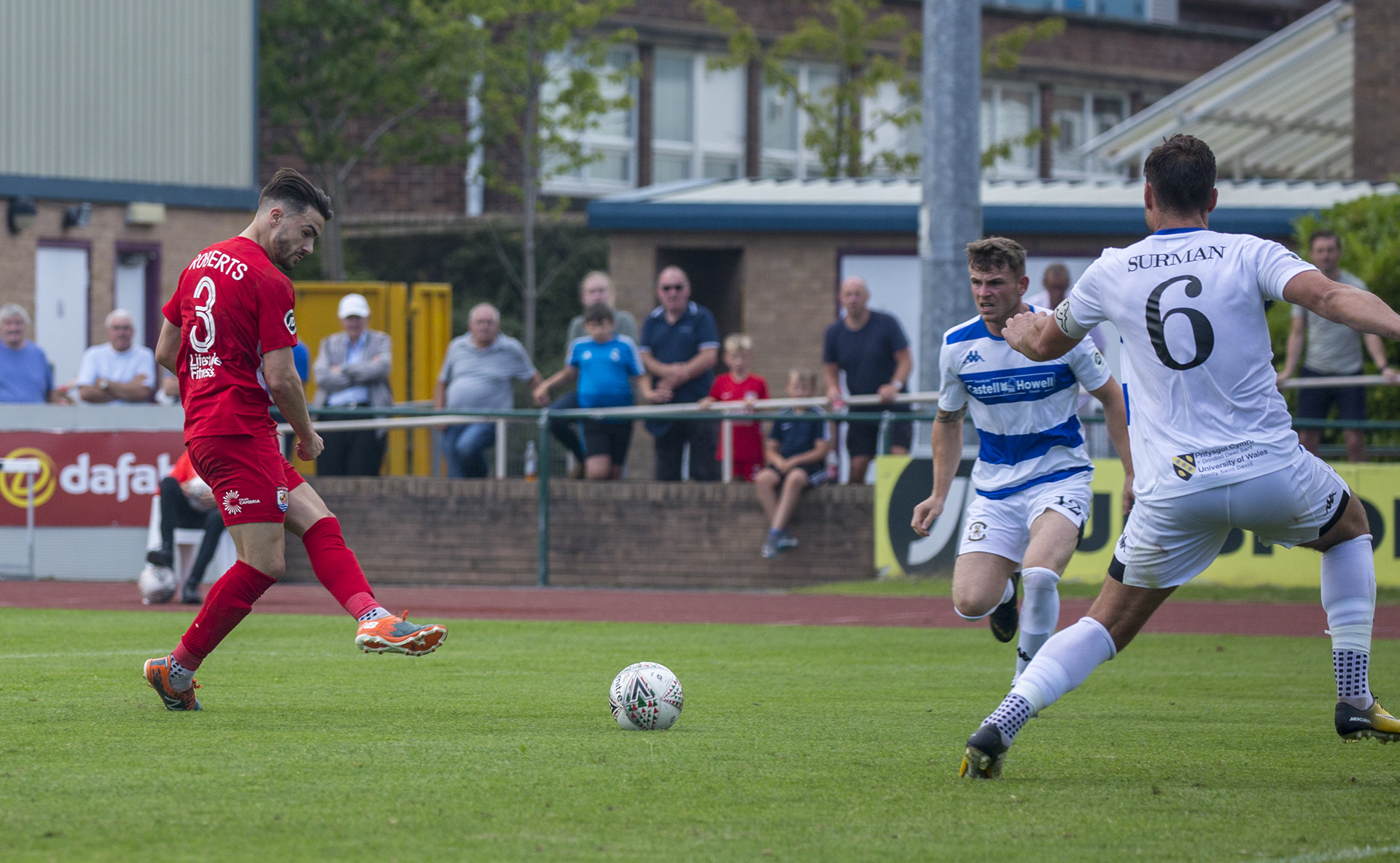 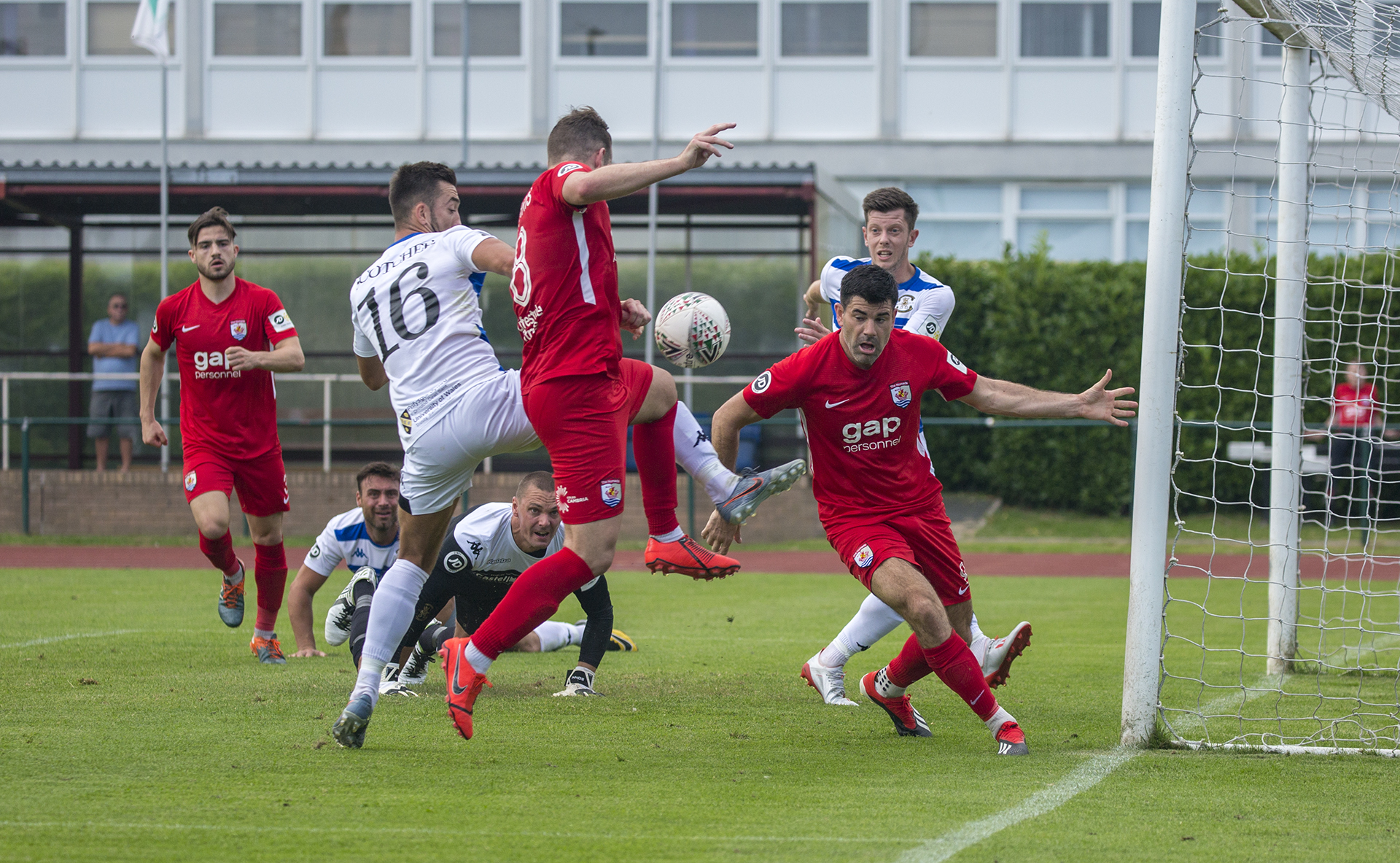 Callum Morris and Michael Wilde both look to score, but somehow this stayed out | © NCM Media 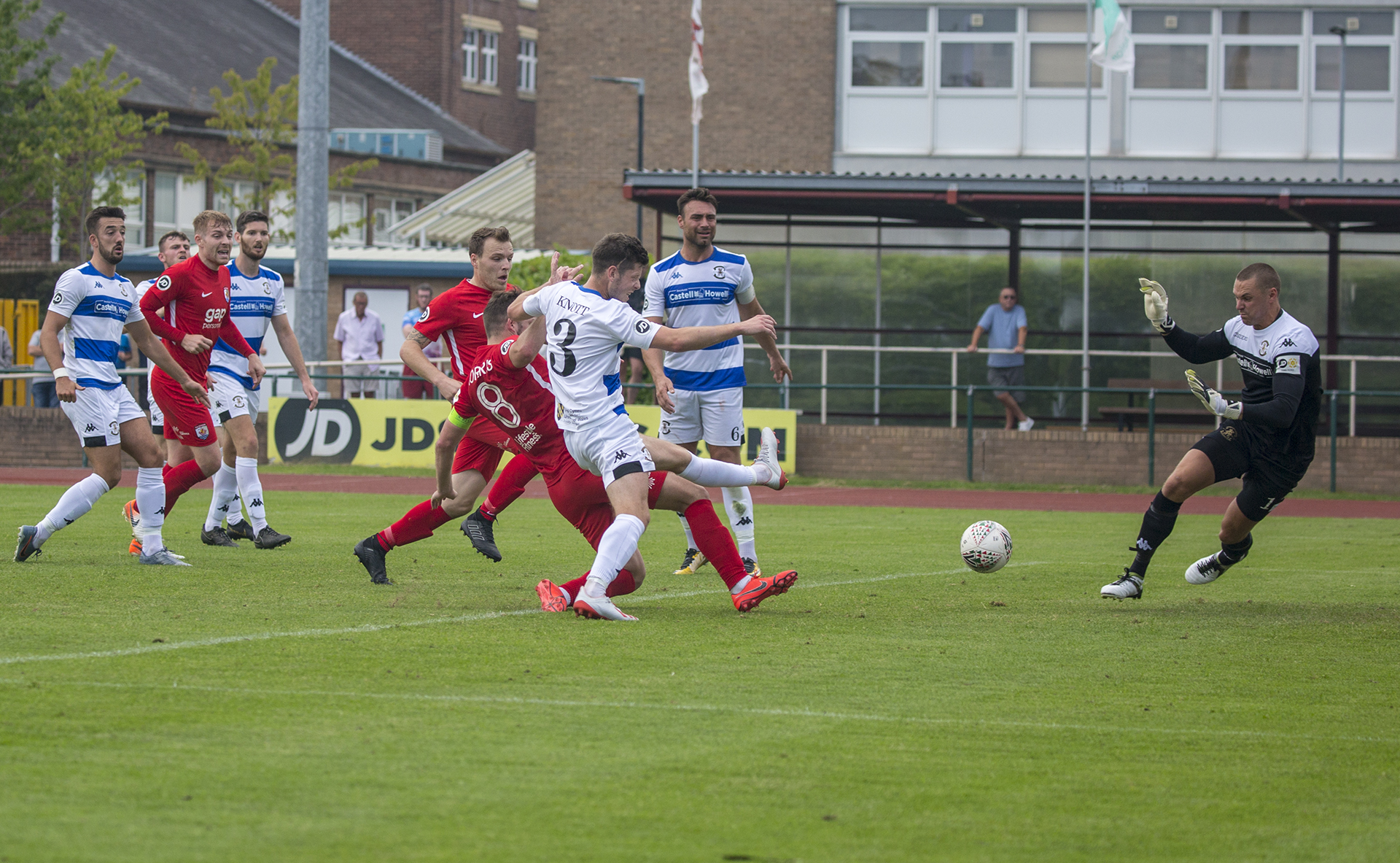