Connah's Quay Nomads kept their undefeated record in the JD Cymru Premier so far with a 4-1 win over Aberystwyth Town on Friday evening.

Callum Morris and Ryan Wignall scored in the first half, with great individual strikes from Michael Bakare and Declan Poole.

They were looking to maintain their form to continue their undefeated season so far, and knew that three points on the night would be enough to go second.

Andy Morrison rotated his side for the game, with Danny Harrison, Priestley Farquharson, and Jay Owen making way for John Disney, Declan Poole, and Michael Bakare.

The game started with Nomads attacking, and nearly opening the scoring on just two minutes, when a run from Michael Bakare saw his shot deflected off keeper Roberts and go to Callum Morris, who in front of a near open goal dragged his shot just wide from six yards.

The visitors went similarly close in the 6th, as a free kick fell to Marc Williams who headed across the face of the Nomads' goal from near the left post.

On 14 minutes, after Jamie Insall went for the ball in the Aberystwyth area and was brought down, Nomads were awarded a penalty kick by referee Mark Petch.

The club's nominated penalty taker Callum Morris stepped up, and made amends for his earlier miss with a powerful strike past keeper Roberts to send his side ahead.

GOAL! @Callum_Morris8 from the spot!

The Nomads showed no restraint in looking for a second goal, as in the 18th Michael Bakare took advantage of a defensive mistake to run into the Aberystwyth area, but had his shot saved at around seven yards out.

But on 25 minutes they found the second goal, after great play from Danny Holmes, Callum Roberts, and Ryan Wignall won a throw in close to Aberystwyth's right corner flag.

Danny Holmes sent the throw in long, and it bounded in the area allowing Wignall to fire a low strike home to make it 2-0 and put Nomads firmly in the driving seat at Deeside.

As the half hour mark passed, Connah's Quay's quick passing game again nearly yielded a goal, when Bakare got to the byline and passed to Wilde, whose first time finish ended up deflecting back off Bakare and into the side netting.

The latter stage of the first half saw Nomads keep possession and win a series of set pieces in the Aberystwyth half as they hunted a third before the break.

They came closest on 43 minutes, when Danny Holmes played a cutting 30 yard pass down to Wignall on the right wing. Wignall sent a cross in and found Bakare, who struck just wide from eight yards out.

During the break, Andy Morrison made his first change of the night, bringing on Kris Owens in place of Ryan Wignall.

Nomads wasted no time at all in the second half, as Michael Bakare made it 3-0 in the 46th minute. Cutting in on a run down the right wing, he took on a cluster of Aberystwyth defenders to send the ball high into the goal and go get on the scoresheet in style.

This goal served to further consolidate Connah's Quay's control on the game as they targeted Aberystwyth's wings with quick runs from Holmes and Roberts at the back, with Bakare and Insall waiting for their chance to run at goal.

But just before the hour mark they were dealt an unexpected blow when they were reduced to 10 men after George Horan was sent off for a foul on Luke Boundford as he looked to break clear into the Nomads' area.

The resulting free kick from the edge of the area forced a corner which was headed just over the goal by Ryan Wollacott, leaving Nomads with their clean sheet still intact ahead of the final 30 minutes.

In the 65th, Nomads made their second change, replacing Michael Bakare with Jay Owen who took to the centre of the midfield.

With around 20 minutes left to play, Aberystwyth continued to look to create chances, but were frustrated by a rigid Nomads display which at times boxed the visitors into their own half.

Nomads' discipline paid dividends, as they added a fourth on the 85th minute with a goal from Declan Poole. Attacking from the right wing, he beat the rushing out Roberts to lift the ball past him and into the open goal from the edge of the year.

Despite the game being all but over, Aberystwyth found a consolation goal through Joe Phillips who headed a cross in from substitute Alex Boss, who impressed on the right wing for the visitors late on.

After three additional minutes of injury time, Nomads' victory was confirmed, which sends them to 2nd in the JD Cymru Premier and keeps them unbeaten in the domestic season so far.

Andy Morrison's side return to league action next Friday 20 September, facing Newtown at Latham Park for an 8pm kick off which will be streamed live on S4C Clic and the Sgorio Facebook page. 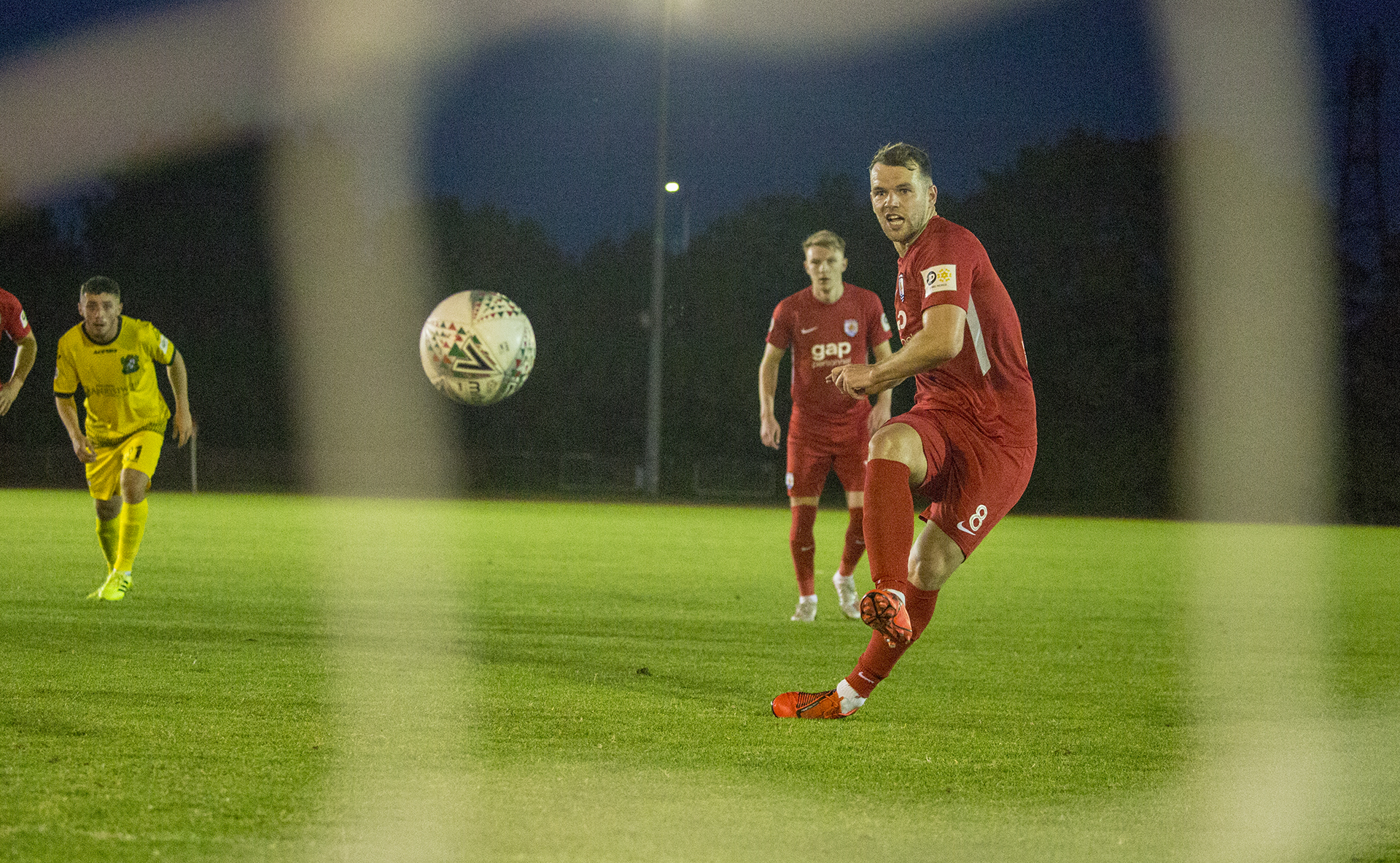 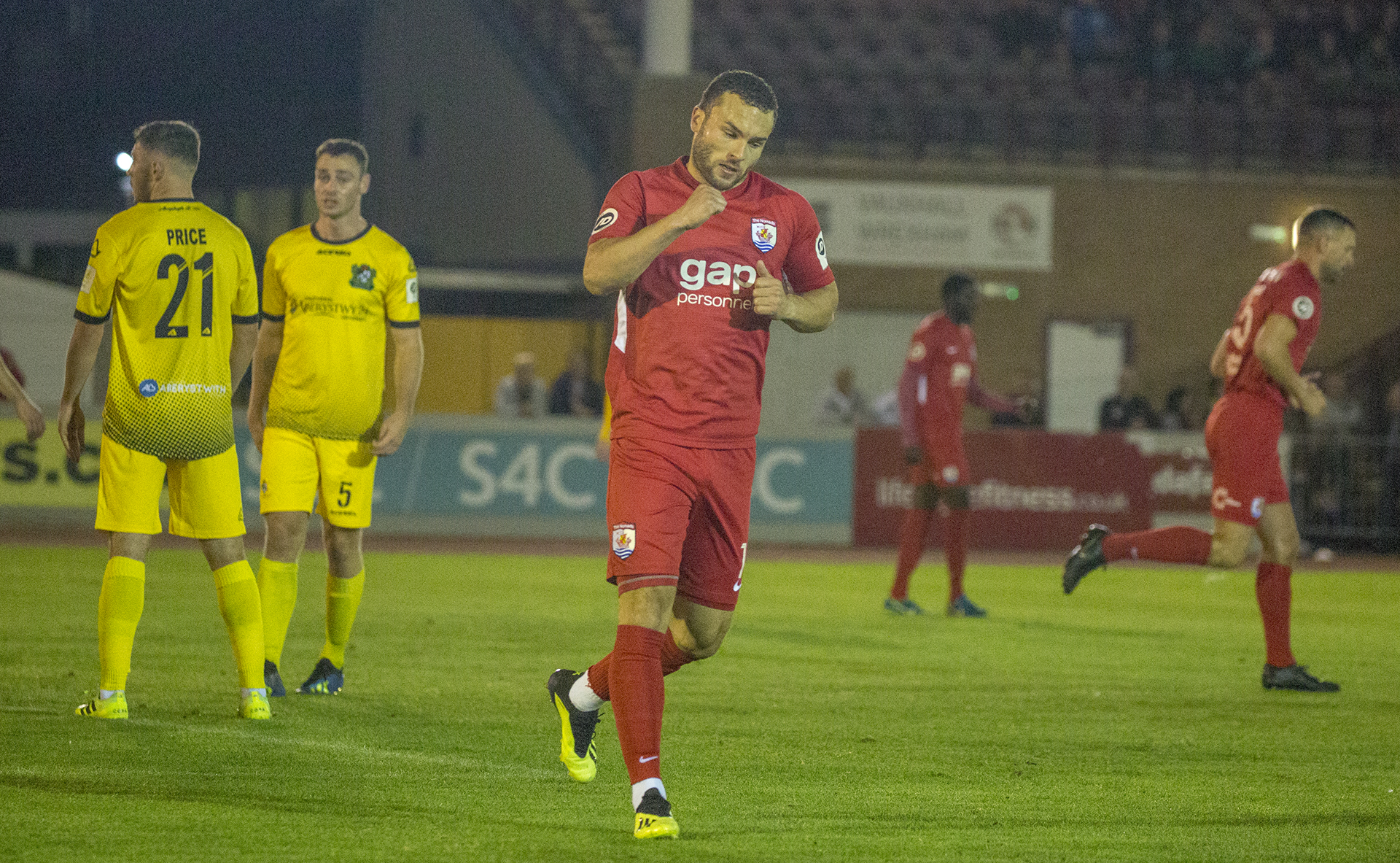 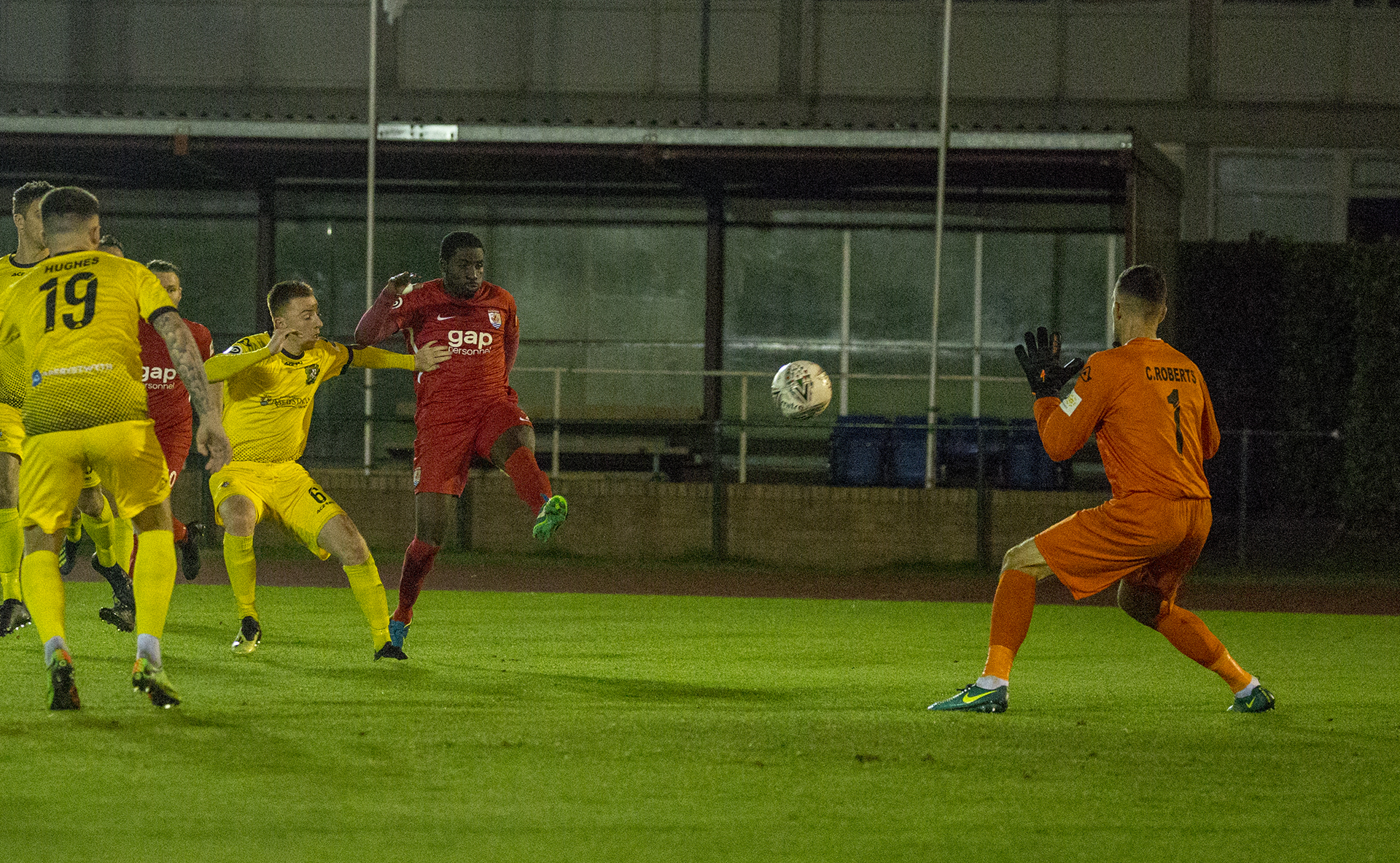 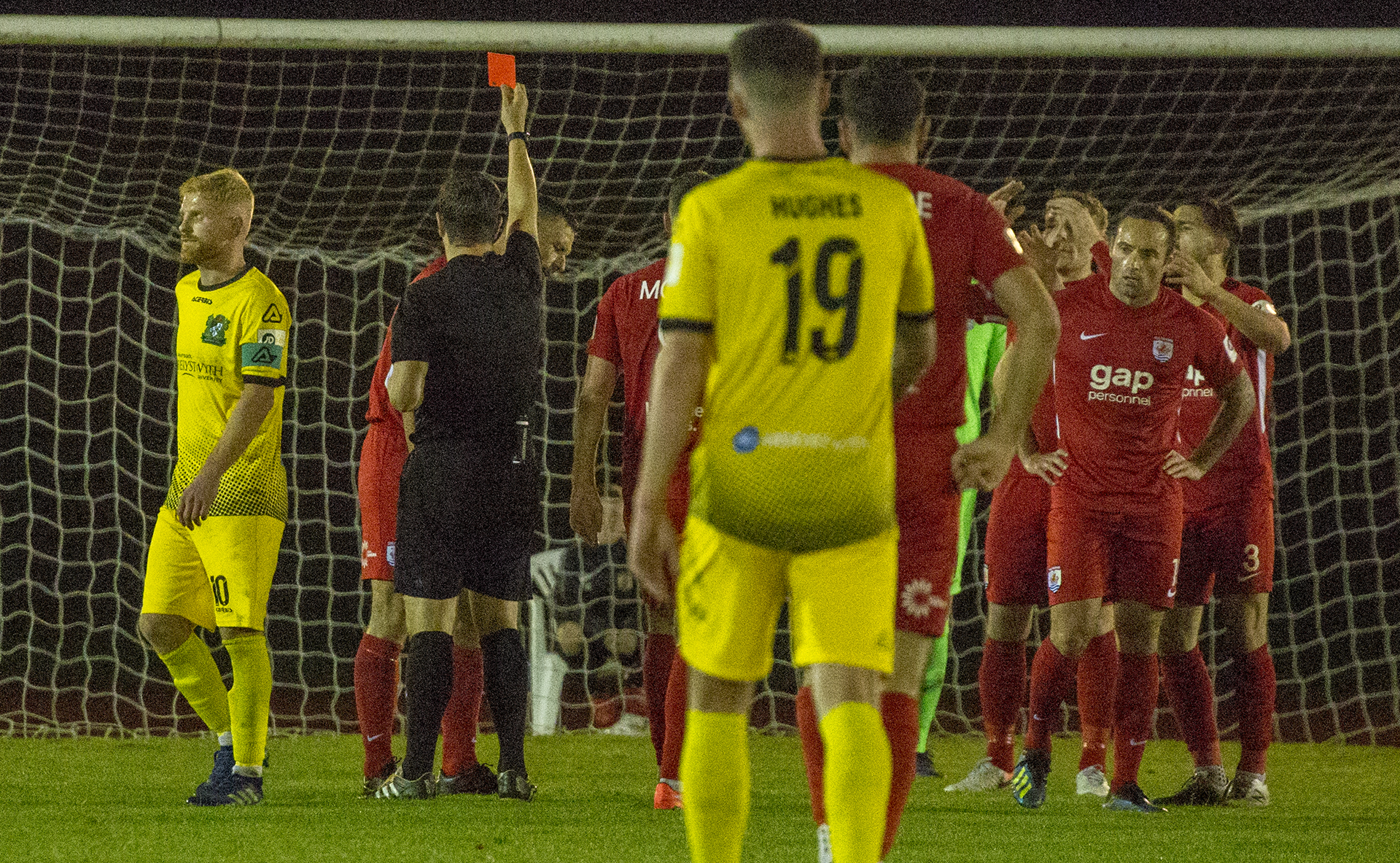 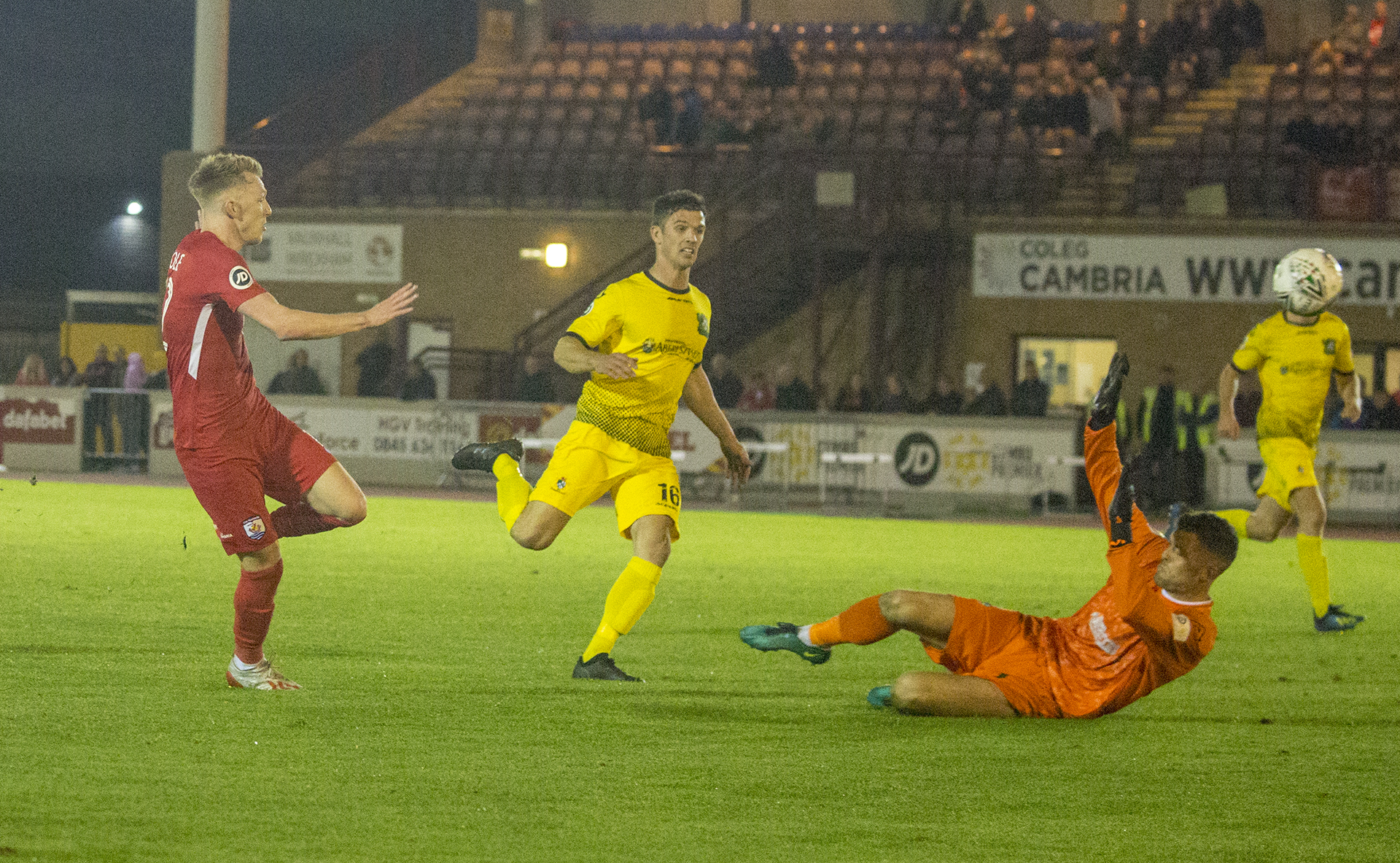