Goals from Michael Wilde, Declan Poole, and Jamie Insall cancelled out strikes from Jamie Breese and Danny Brookwell in either half.


The game came just three days after Nomads' last outing in the Tunnocks Caramel Wafer Cup, where they were eliminated from the competition through a 2-0 defeat to Scottish Championship side Partick Thistle.

That defeat was their first in 12 games, and they went into the JD Cymru Premier clash with Caernarfon Town still unbeaten in the league after nine games. Having faced the Cofis on Bank Holiday August weekend and drawn 0-0, the Nomads were looking for a win to extend their undefeated record.

Andy Morrison was faced with injuries ahead of his team selection, with Callum Morris, Nathan Woolfe, and Ryan Wignall all ruled out. He started Jamie Insall who came on a substitute against Partick Thistle, and handed call ups to academy scholars Harry Owen, Sam Williams, and Jack Robinson who all started on the bench.

His counterpart Sean Eardley meanwhile started Jamie Breese, who scored against Nomads in a 1-0 victory for the Cofis at Deeside, with ex-Nomad Noah Edwards starting on the bench for the travelling Cofis.

The game started with both sides on the front foot searching for an early goal. In the 2nd minute a Jay Owen corner was nearly converted by Michael Wilde if not for a close range stop from keeper Alex Ramsay, with a looping header from Darren Thomas going just over the crossbar in the 4th.

In the eighth minute the scoring was opened after a great piece of play in the final third which saw Insall and Bakare connect on the right wing before Insall passed to Wilde, who turned to slot in at close range.

But Connah's Quay's lead lasted for only one minute, as Danny Brookwell replied by running close to the Nomads goal and finishing low into the goal to make it 1-1 with two goals in under two minutes.

After the explosive start, Nomads and Caernarfon sought to tighten up at the back, but continue looking for a way to take the lead. This saw chances for both sides, but without challenging the keepers Lewis Brass and Alex Ramsay.

With half an hour played, Michael Bakare went close to sending Nomads ahead in the 34th, bursting into the Caernarfon area only to have his shot from 10 yards held by Ramsay, despite the shot initially bouncing off the Cofi stopper.

In the 39th, Jamie Insall then threatened, getting onto the end of a cutting 35 yard through ball from Danny Holmes to shoot narrowly wide from around eight yards out.

Caernarfon were meanwhile managing to win set pieces in the Nomads' half, but Connah's Quay's George Horan-led defence was handling the pressure well.

At half time the score stood at 1-1, but the encouraging attacking displayed in the first 45 minutes showed the potential for more goals remained in the game.

Jamie Insall was upfront chasing each ball down as the Nomads look to take control, and it paid off for him in the 53rd. He finished off a great piece of passing play, dragging back the ball to pass to Poole who fired home from 10 yards out to make it 2-1.

Insall then followed up to make it 3-1 two minutes later, poaching the ball inside the Caernarfon area to shoot low into the bottom right corner.

But Nomads' celebrations were short lived, as a minute later in the 56th, Danny Brookwell took advantage of a mix up in the Nomads' area to send the ball past an off his line Lewis Brass and into the open goal.

With the score now 3-2 the game remained tight, and was continuing to contain the potential for more goals. Knowing they were very much in the game, Caernarfon introduced Noah Edwards into the midfield, and saw Leo Smith shooting over the crossbar in the 65th.

In the 66th, Insall sealed his brace with another well poached goal in the Caernarfon area, pouncing on the ball just inside the area and striking low from seven yards out.

With a two goal cushion restored, Nomads looked to take control of the game and prevent any more quick comebacks from the Cofis.

Following a substitution to replace Jay Owen with Kris Owens in the midfield, Caernarfon hit the woodwork in the 78th from a 15 yard Leo Smith shot.

But as the 80th minute approached, Nomads began to take control and shut down the opposition with some vital clearances from the likes of John Disney.

In the 82nd, Sameron Dool was brought on in place of Jamie Insall, and helped Nomads contain the Caernarfon for the remainder of the game.

Despite runs into the final third from Bakare and Owens, the game finished following four additional minutes of time to confirm a 4-2 victory for Connah's Quay.

The result sends Nomads second in the JD Cymru Premier, and keeps them undefeated in the league after 10 games ahead of their next fixture at Cardiff Met FC on Saturday 19 October for a 2:30pm kick off. 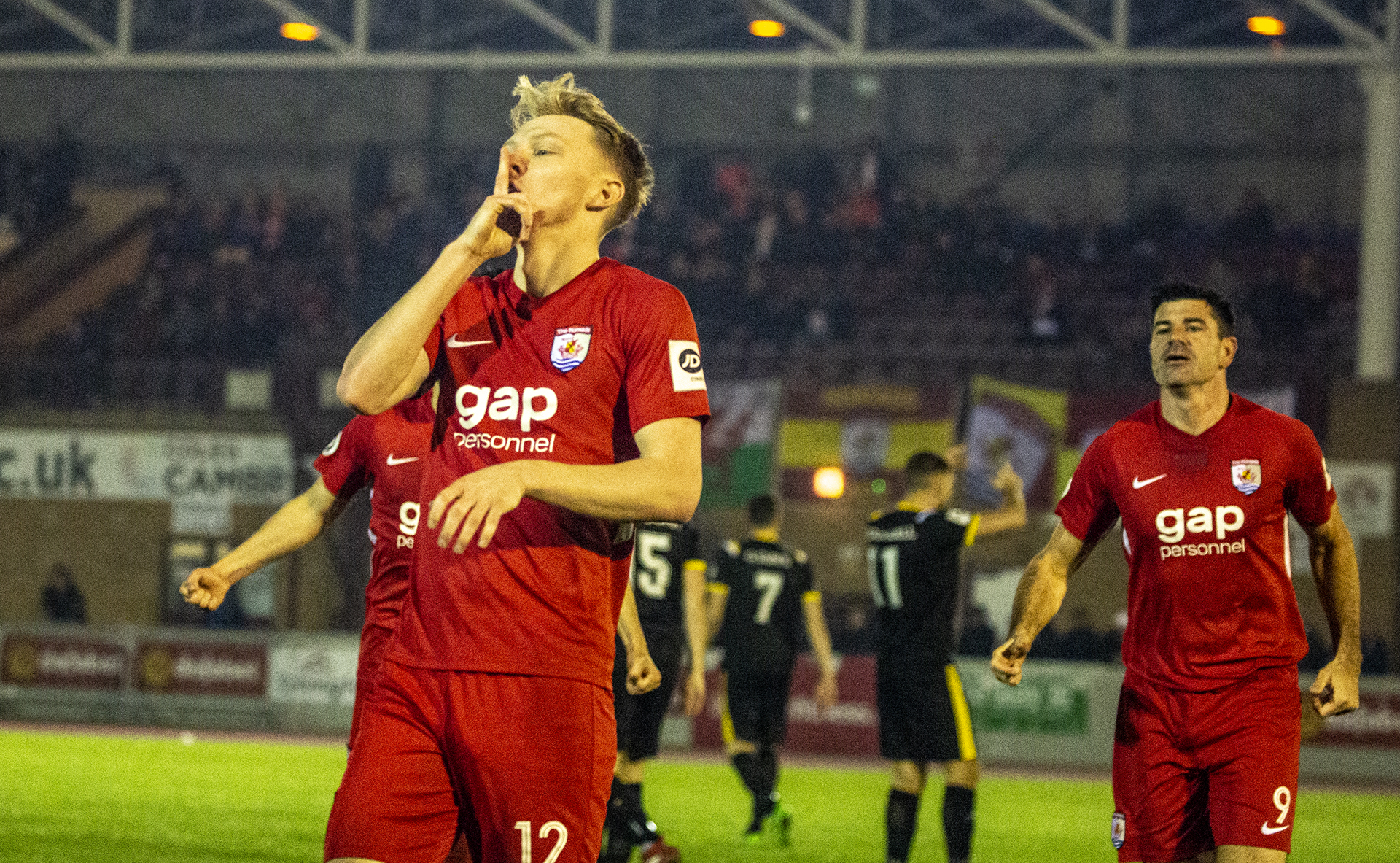 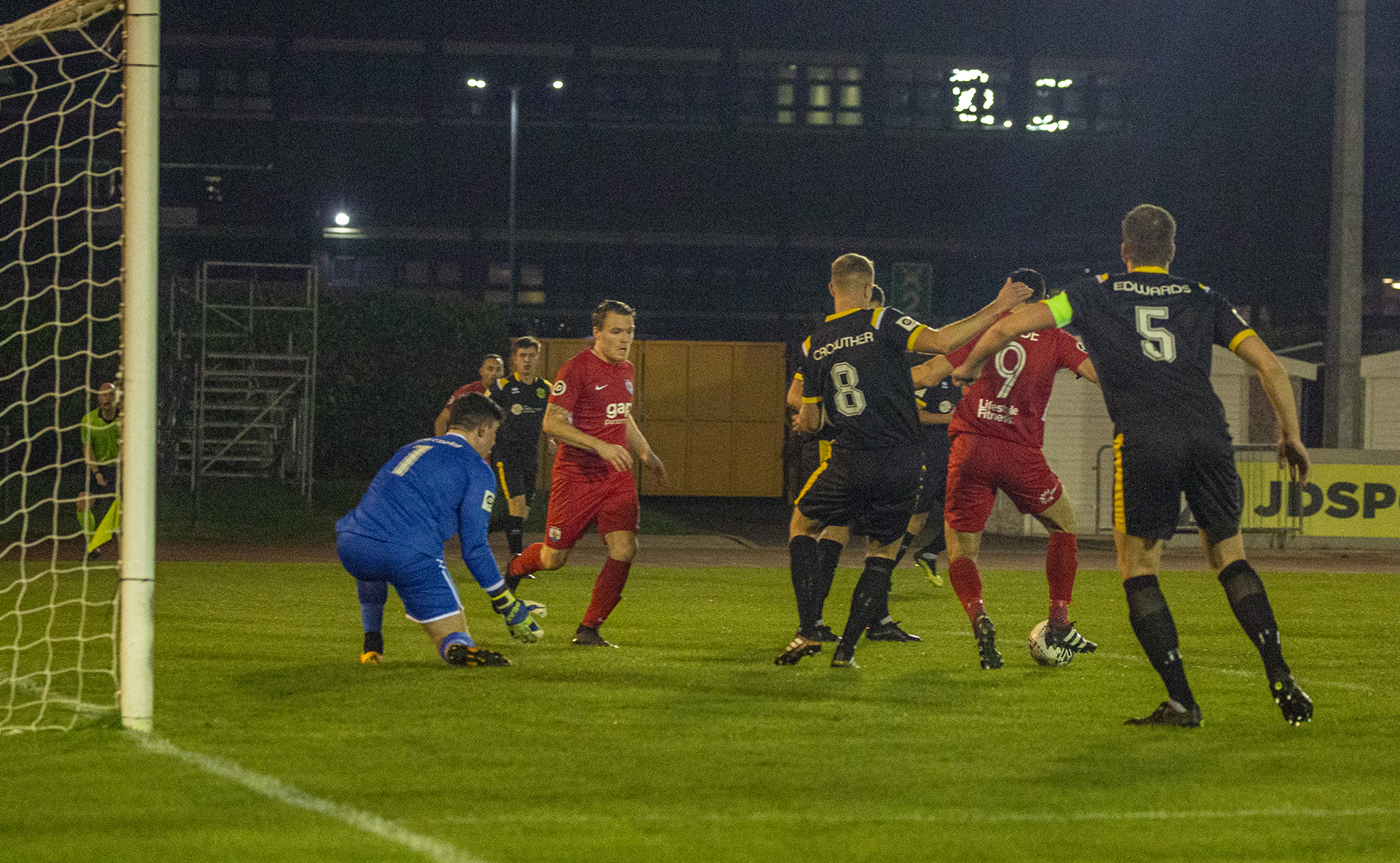 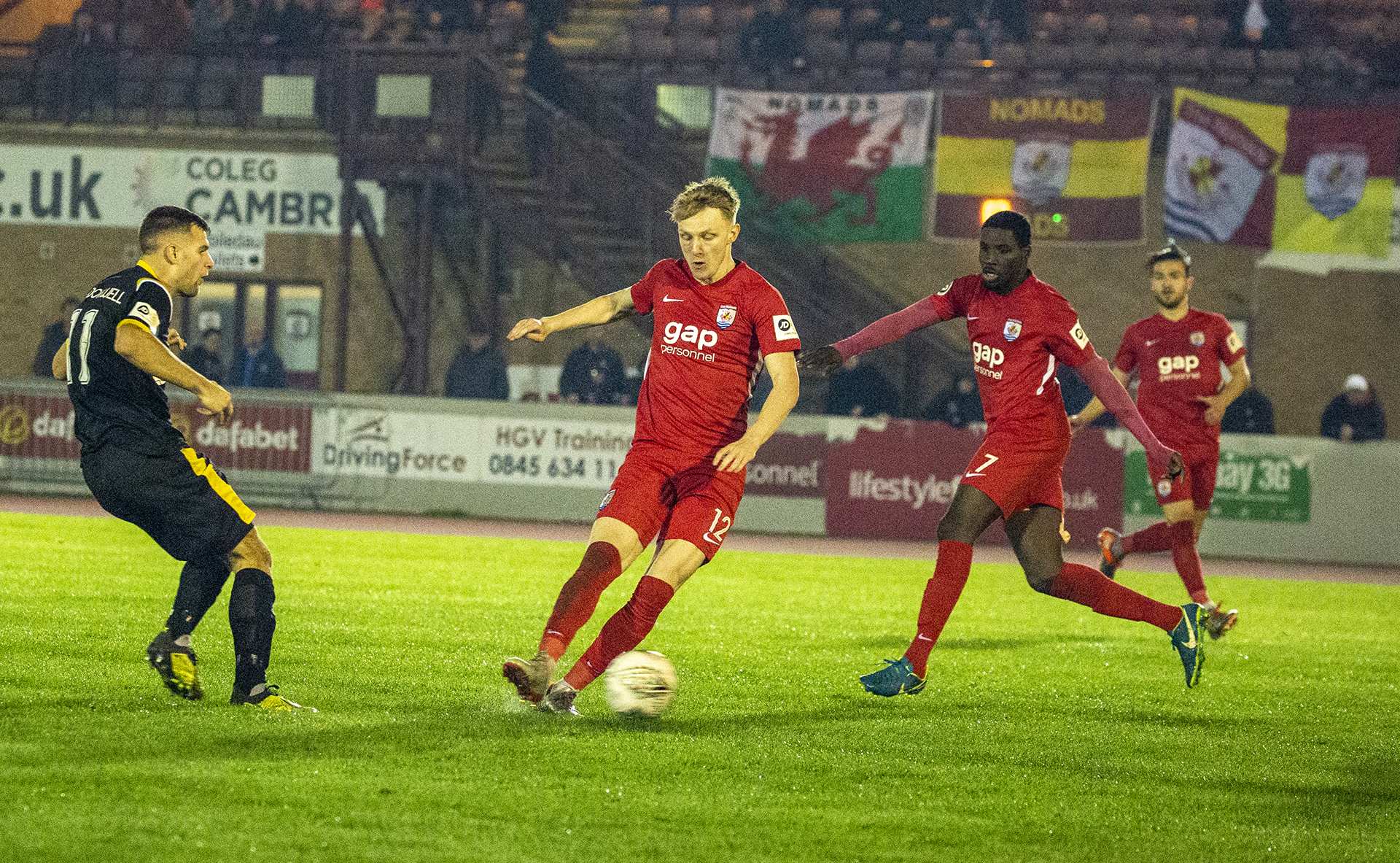 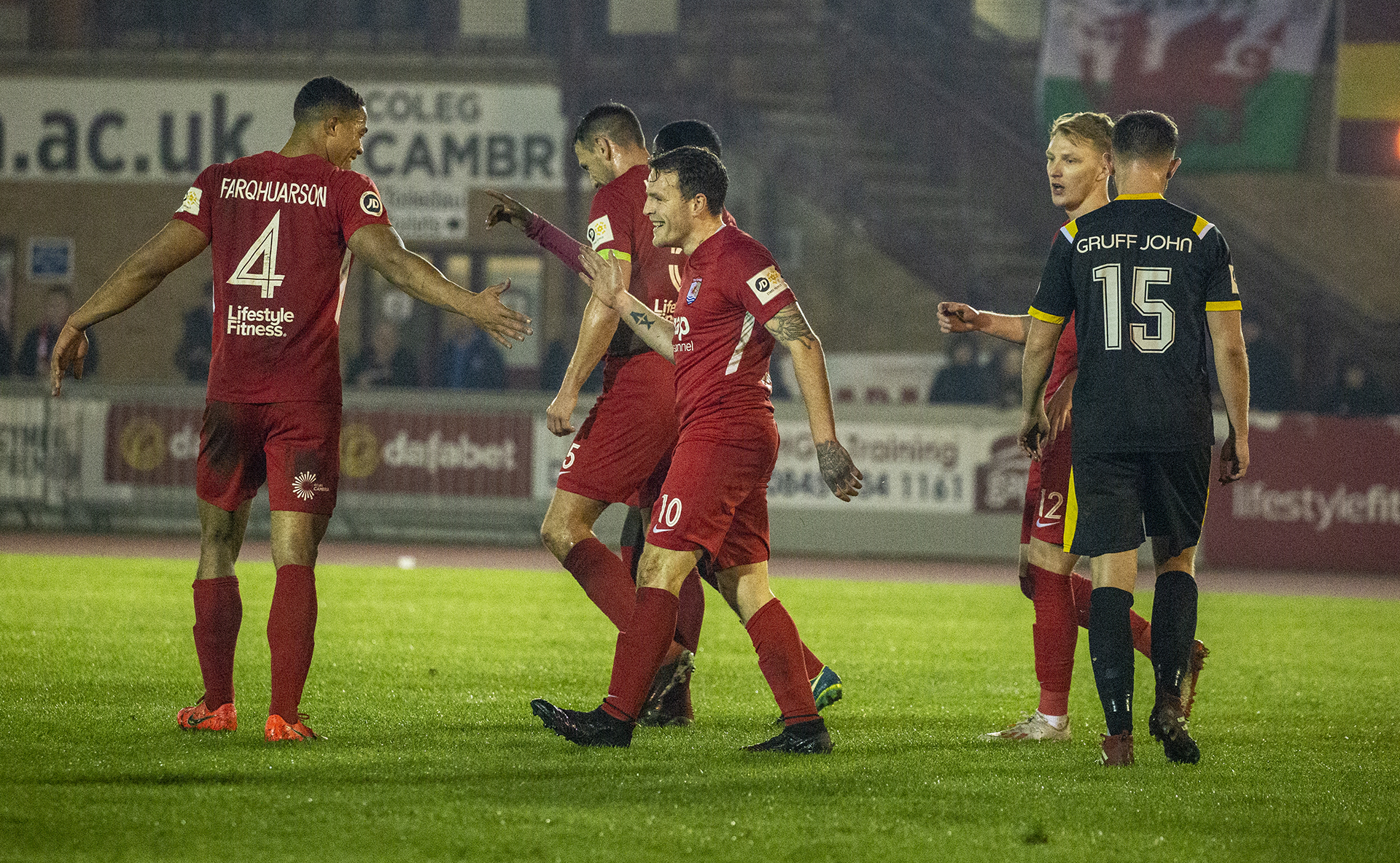 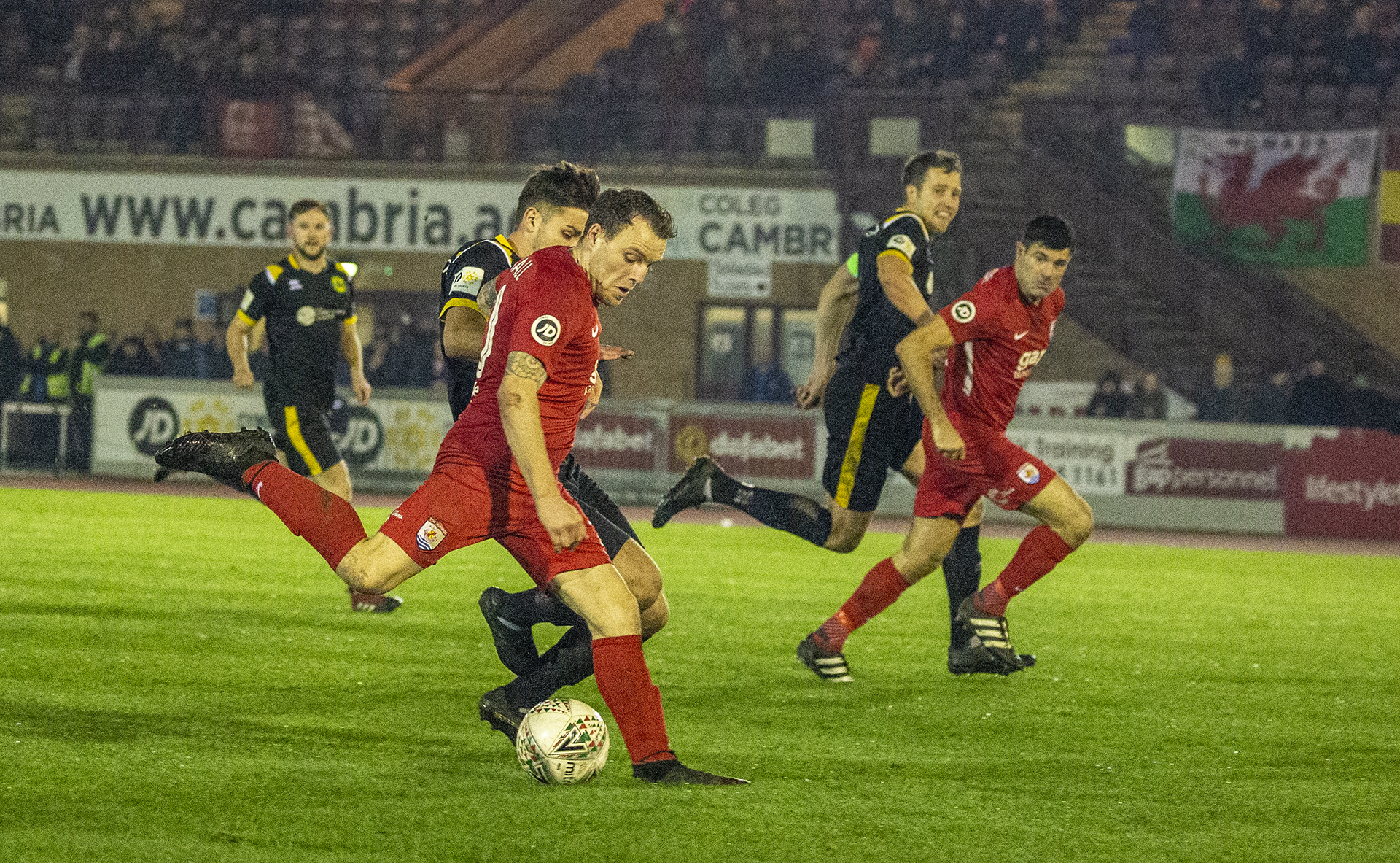 Jamie Insall gets a shot off | © NCM Media