Connah's Quay Nomads sealed mathematical qualification for the JD Cymru Premier's Championship Conference with a 2-1 win over Airbus in a Boxing Day derby against Airbus.

First half goals from Jamie Insall and John Disney were enough to give Nomads the victory, with Andy Owens reducing the deficit via an 80th minute penalty.

The game saw Nomads renew their JD Cymru Premier rivalry with neighbours Airbus UK following their promotion back into the top flight after two seasons in the JD Cymru North.

It was also part of the traditional festive double header derby, with Nomads set to face Airbus in their next and final game of 2019 at the Hollingsworth Group Stadium on Monday 30th December.

Andy Morrison's side came into the game following a 2-1 come back against Bala in which Michael Bakare came off the bench to score the winning brace. He started alongside Kris Owens as the only two changes from that match.

There were many familiar faces in the visitor's squad, as Andy Morrison's former club were led upfront by Andy Owens, who was part of the Nomads' 2018 JD Welsh Cup-winning squad, along with former Nomads manager Steve O'Shaughnessy taking charge of the Wingmakers.

The game started brightly, with Nomads soon winning a number of throw ins from which Danny Holmes utilised his long throws into the Airbus area.

And one of his throw ins created the first major chance of the game on four minutes, when he received the ball back and crossed to Wilde, who headed just wide of the Wingmakers' goal at close range.

In the 11th, Bakare was showing his power upfront as he ran alongside two defenders on the edge of the area to shoot over the crossbar.

Connah's Quay were putting on a good passing, attacking display, and this paid divendends in the 15th when Jamie Insall sent them ahead.

From a John Disney cross, Callum Morris spotted Insall in the six yard box and sent a low header his way which he was able to get on a touch to send it under Airbus keeper Dave Roberts.

Airbus were eager to get back into the derby, and went close in the 21st when Jordan Evans got in front of the Nomads goal but had his shot held by Nomads' stopper Lewis Brass.

As the half hour mark approached, it was Nomads who were on top as they continued to make high quality runs into the Airbus end from the likes of Declan Poole and Bakare.

Meanwhile, Jay Owen, Kris Owens and Danny Holmes were all making sure they were first to the ball to keep the Airbus attack out of the Nomads' final third.

Following the wet weather, the ball was holding up on the pitch, leading to some scrambles for possession in and around the Airbus end as Nomads sought to double their lead before the break.

But in the 38th, Airbus went close against the run of play when Jordan Evans sent a 25 yard free kick on target but was denied by Lewis Brass who pushed it over the crossbar.

As half time approached the Nomads were again putting pressure on the Airbus end, and had the ball bounding around the final third deep into four minutes of injury time.

After a Nomads free kick was sent into the area in the on 45+3 minutes, it came back to John Disney, whose shot from 25 yards out was initially met by the hand of Roberts, but bounced behind him to go into the net.

The second half started with Nomads again on the front foot, with Wilde breaking close to goal but being found offside before he could get a shot away in the 48th.

On 55 minutes, Nomads made their first substitution to bring on Sameron Dool in place of Jamie Insall. Dool soon got involved in sending Nomads into the final third, making runs through the midfield to try and set up Bakare and Wilde.

In the 59th, a quickly taken free kick by Airbus nearly sent them through on goal, but a vital tackle from Danny Harrison stopped them from testing Lewis Brass.

On 64 minutes, a well worked piece of play from Nomads nearly yielded a third, as a run from Dool and cross from Owens was headed by Morris to Wilde, whose diving header at close range was saved by keeper Roberts.

In the 69th, a break from Michael Bakare again saw Nomads go close, as he burst down the left wing, turned past a defender, but was tackled as he look to turn again before shooting.

With 20 minutes to go the heavy pitch was having an effect on both sides as they struggled to carry the ball with pace.

Nomads sought to contain any Airbus attacks, repeatedly meeting high balls into their end with headed clearances. The Wingmakers did get a shot away in the 77th, when the ball fell to substitute Darlington only 10 yards out from goal, but his effort went over.

A second substitution for Nomads saw Bakare replaced by Priestley Farquharson who joined the Nomads defence for the final 10 minutes of the game.

But on 80 minutes, Airbus brought themselves back into the derby after Andy Owens was fouled by the sweeping Lewis Brass in the Nomads' area, leading referee Mark Petch to point to the spot.

Andy Owens stepped up and converted to ensure the final stage of the game would be a tight one as Nomads looked to hold onto their lead.

They responded to the goal quickly, winning a corner ball in the 81st, with Wilde being blocked from sending a volley on goal on 84 minutes by keeper Roberts who rushed off his line to block him.

As full time loomed, Airbus were hunting a late equaliser, winning a corner in the 87th which Wilde headed away.

They continued to push in the 2nd of four minutes additional time, when the ball fell to Tomassen in front of goal, but his strike curved round the left post thanks to the slightest of blocks from the Nomads defence to deny him a certain equaliser.

Conor Harwood then replaced Declan Poole to help see out the final few passages of play, which ended with Nomads securing the derby win and mathematical qualification for the Championship Conference in phase two of the JD Cymru Premier.

They now move onto the return leg of their double header against Airbus, facing them on Monday 30th December for a 19:45 kick off at the Hollingsworth Group stadium. 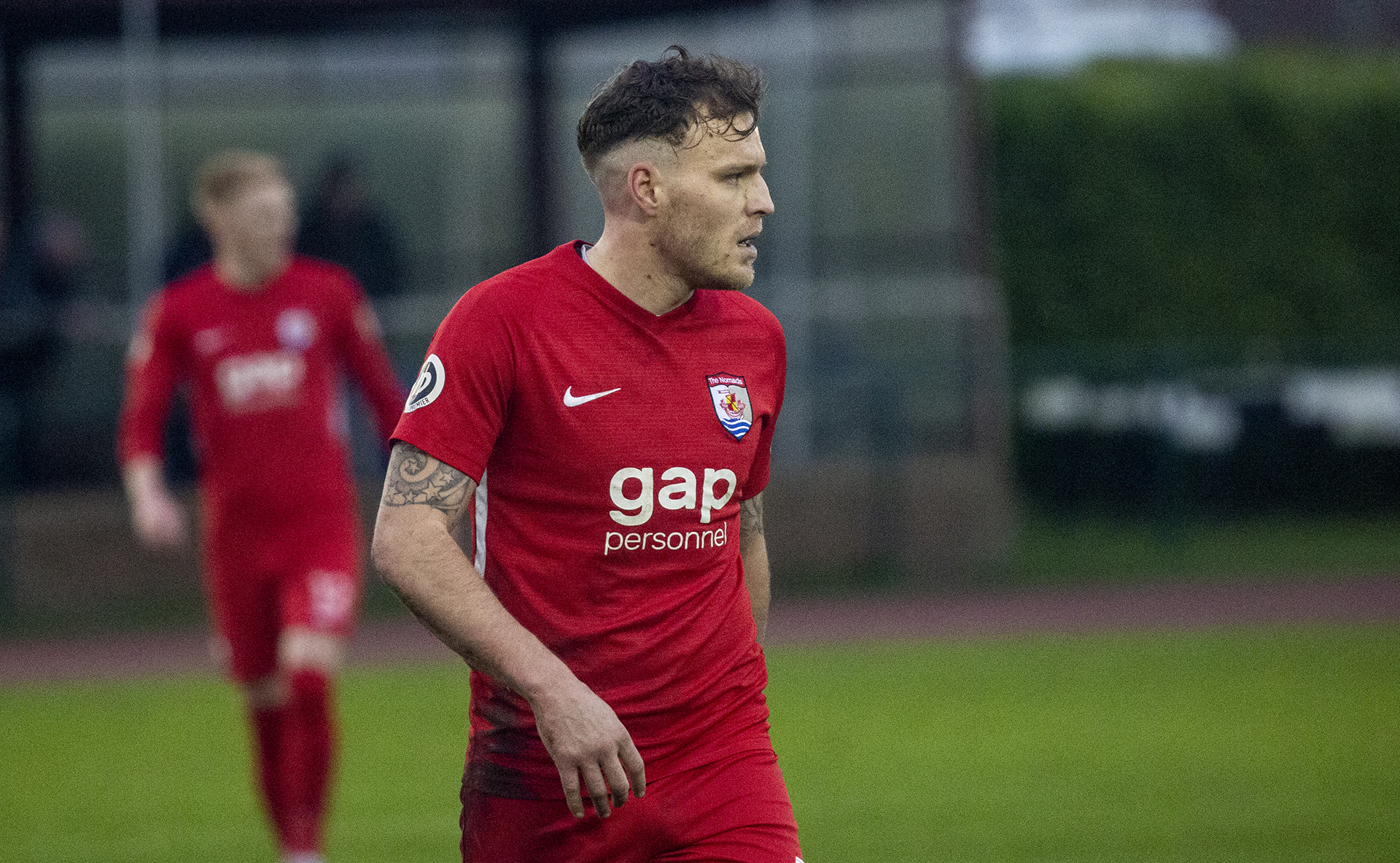 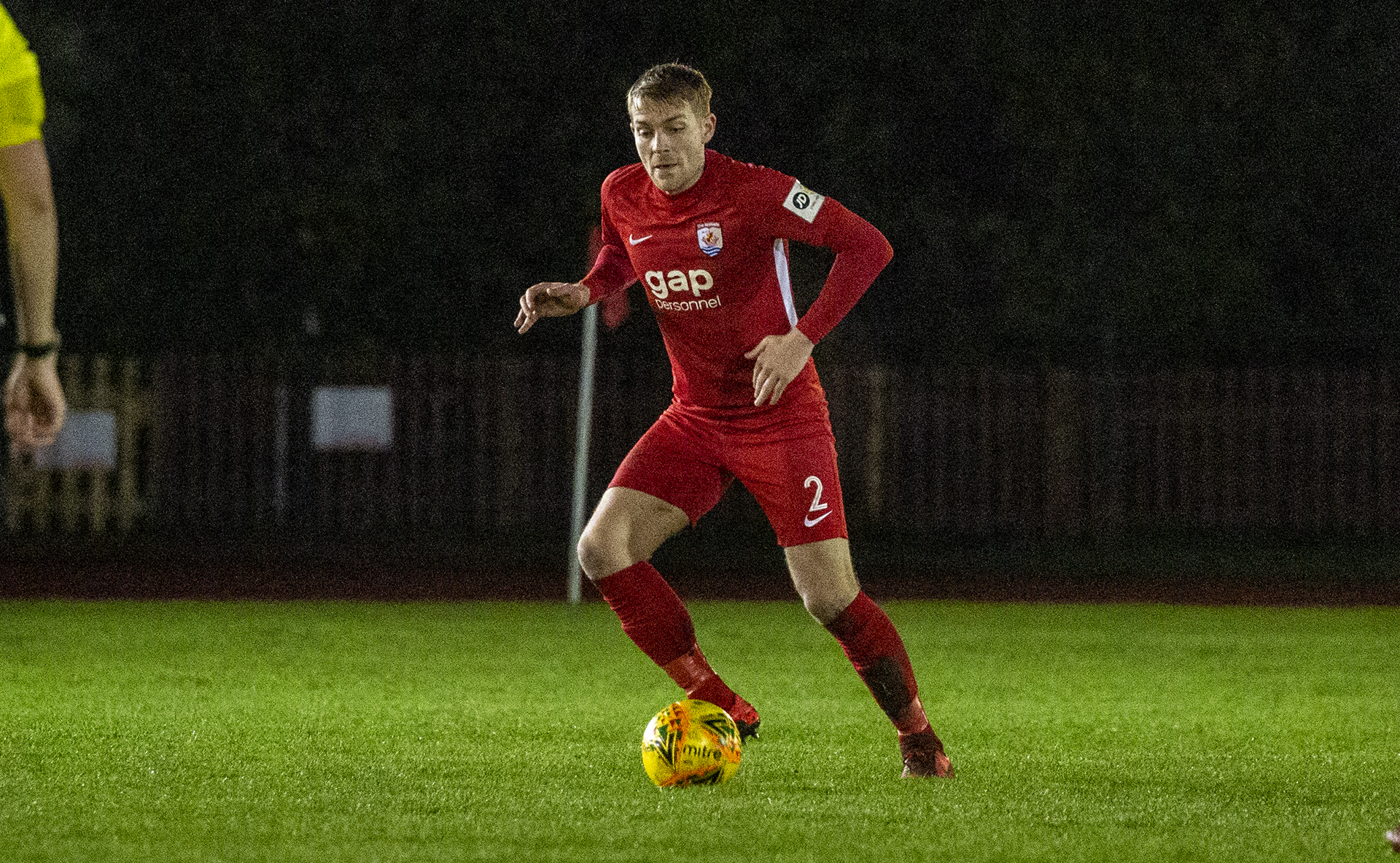