Connah's Quay Nomads left it late to beat Barry Town 2-0 at the Deeside Stadium on Saturday afternoon in a JD Cymru Premier clash.

The game was goalless up until the 91st minute when a scrambled goal gave Nomads a late lead, and a 93rd minute Declan Poole strike confirmed a dramatic late victory.

Nomads came into their first game of the decade in strong form after an undefeated December which had seen a significant comeback win over Bala Town, and back to back victories against local rivals Airbus UK Broughton.

Barry Town had meanwhile recovered from a run of losses to win two out of their last three, and were looking to close the six point gap separating themselves in fourth, and Nomads in second.

Andy Morrison made three changes to his line up, with captain George Horan coming back into the squad having missed out on last month's games due to suspension. Upfront for Connah's Quay was Conor Harwood, whilst Lewis Brass came back in goal after recovering from an injury.

The game started in very windy conditions at Deeside, with the first chance coming in the 5th minute when a Michael Bakare cross was volleyed high over the goal by Declan Poole from around seven yards out.

Bakare again threatened with a run down the wing and pass to Jamie Insall, who sent the ball low and wide of the left post.

The Nomads were playing against the wind in the first half, and the effects were clear to see, with an 11th minute goal kick from Lewis Brass being blocked and then helped to go out for a corner ball by the strong gales.

On 16 minutes, Barry had their first chance of the afternoon via Touray, who got in front of a cross to shoot from seven yards only to see the effort held by Lewis Brass.

The visitors again threatened on 22 minutes, winning a corner ball which fell to Press who shot over the goal from eight yards out.

Despite The Linnets' presence in the home half, Nomads were able to keep them at bay against the wind as the first half went on.

At the other end, Declan Poole and Michael Bakare were working hard to make runs at the Barry goal, and won multiple throw ins near the away end which were delivered long by the likes of Danny Holmes and Priestley Farquharson.

Half time approached, with Nomads having done enough to defend themselves against a well organised Barry side backed by the strong wind.

Knowing it was their turn to play with rather than against the weather in the second half, Andy Morrison brought on Ryan Wignall in place of Conor Harwood during the interval.

Wignall got involved immediately, making a run down the wing in the 46th to win a corner for Nomads which was shot over the goal from 12 yards by Holmes.

Following that set piece, the Nomads remained in the Barry half for the vast majority of the second half, winning multiple corner balls and throw ins in search of a goal to break the deadlock.

And some of the Nomads' faithful thought they'd finally scored on 55 minutes, when an acrobatic effort from Priestley Farquharson in the Barry area went in, but was ruled out for offside.

On 59 minutes, Michael Bakare went close when he fired a 25 yard free kick low and just past the left post, leaving Nomads still looking to take the lead after the hour mark.

George Horan nearly marked his return to the side with a goal in the 64th minute, but his close range effort was kept out by keeper Mike Lewis with a save right on the goal line as referee Kevin Owen waved Nomads' claims that the ball had already crossed it away.

With 20 minutes to play, Andy Morrison's side were launching wave after wave of attacks on the Barry goalmouth, with Kris Owens getting a shot away from 18 yards out saved on 78 minutes.

In the 79th, Wignall curled an effort from the edge of the area which went just wide of the top right corner to take Nomads' search for a now late winner into the final 10 minutes.

Wignall was again causing problems in the Barry area in the 84th, when a well taken header from a free kick went towards goal from around eight yards, but was again dealt with by the keeper.

With the game now being played almost entirely in Barry's final third, Nomads sent a header onto the roof of the net in the 87th to see another chance go amiss.

But the Nomads' never say die attitude paid off, as in the 91st minute, from a Michael Bakare corner, a scramble involving Farquharson, Insall, and Jay Owen did enough to see the ball cross the line with the final touch appearing to go in through a combination of Jamie Insall and Barry Town's Curtis Watkins.

Following the goal the Nomads stayed on the front foot deep into injury time, with Ryan Wignall going on a counter attack and shooting from the edge of the area to have the shot blocked, but Declan Poole followed up to fire the rebound in from around eight yards.

The late late victory sends Nomads one point below league leaders TNS, and nine ahead of Barry in fourth. It also saw Connah's Quay finish phase one undefeated at the Deeside Stadium.

They now turn their attentions to a top of the table clash at TNS next Saturday 18th January for a 5:15pm kick off. 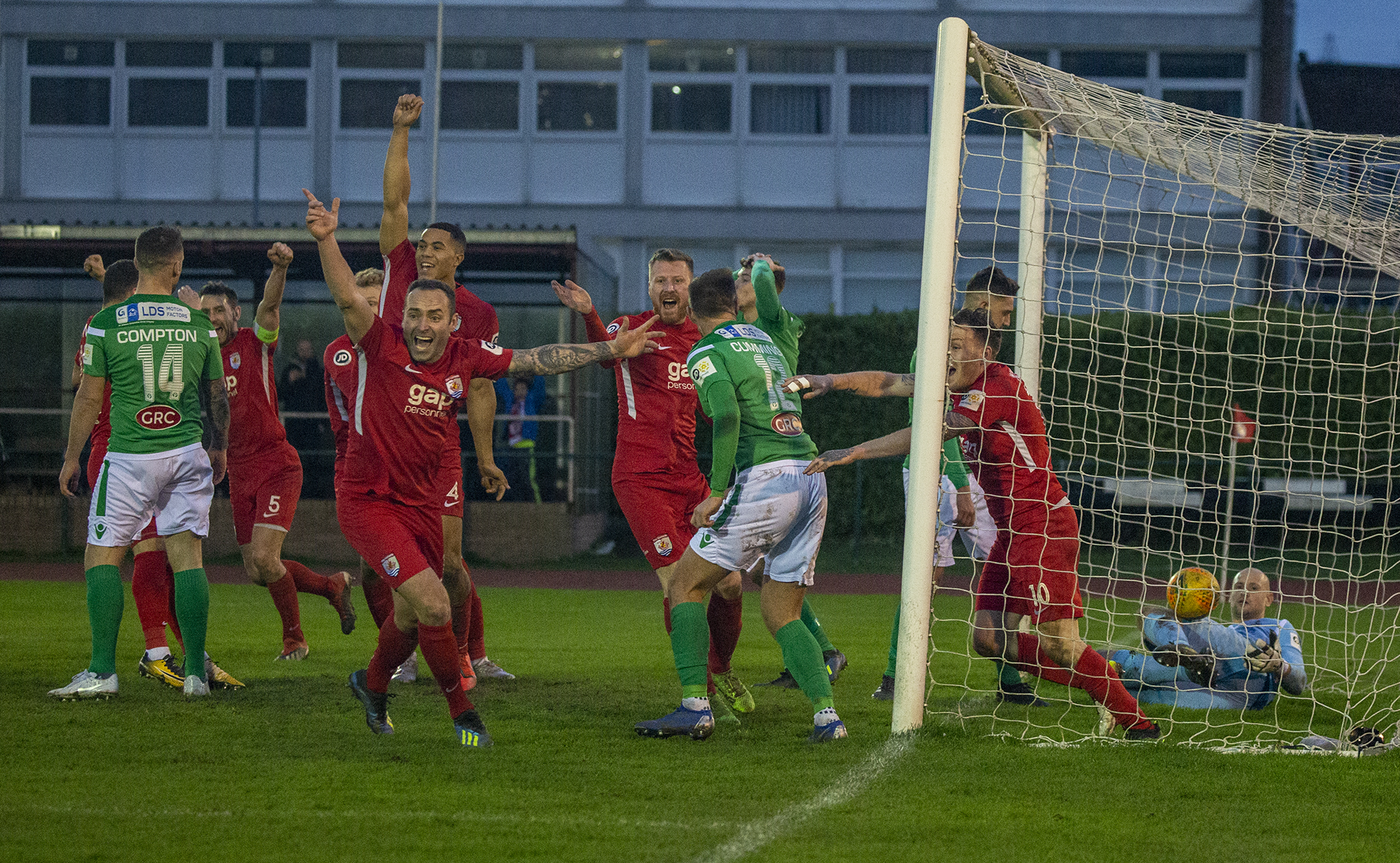 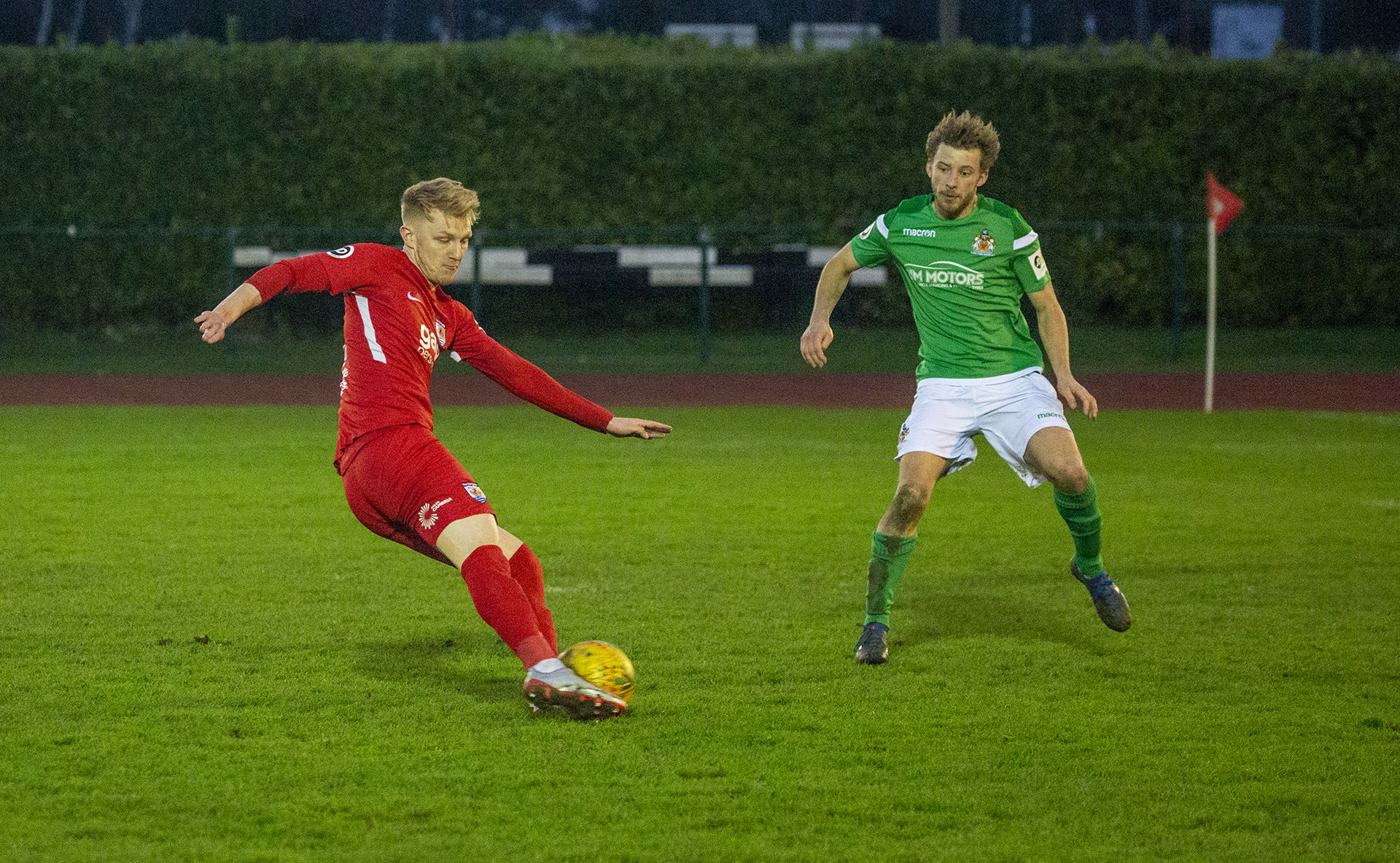 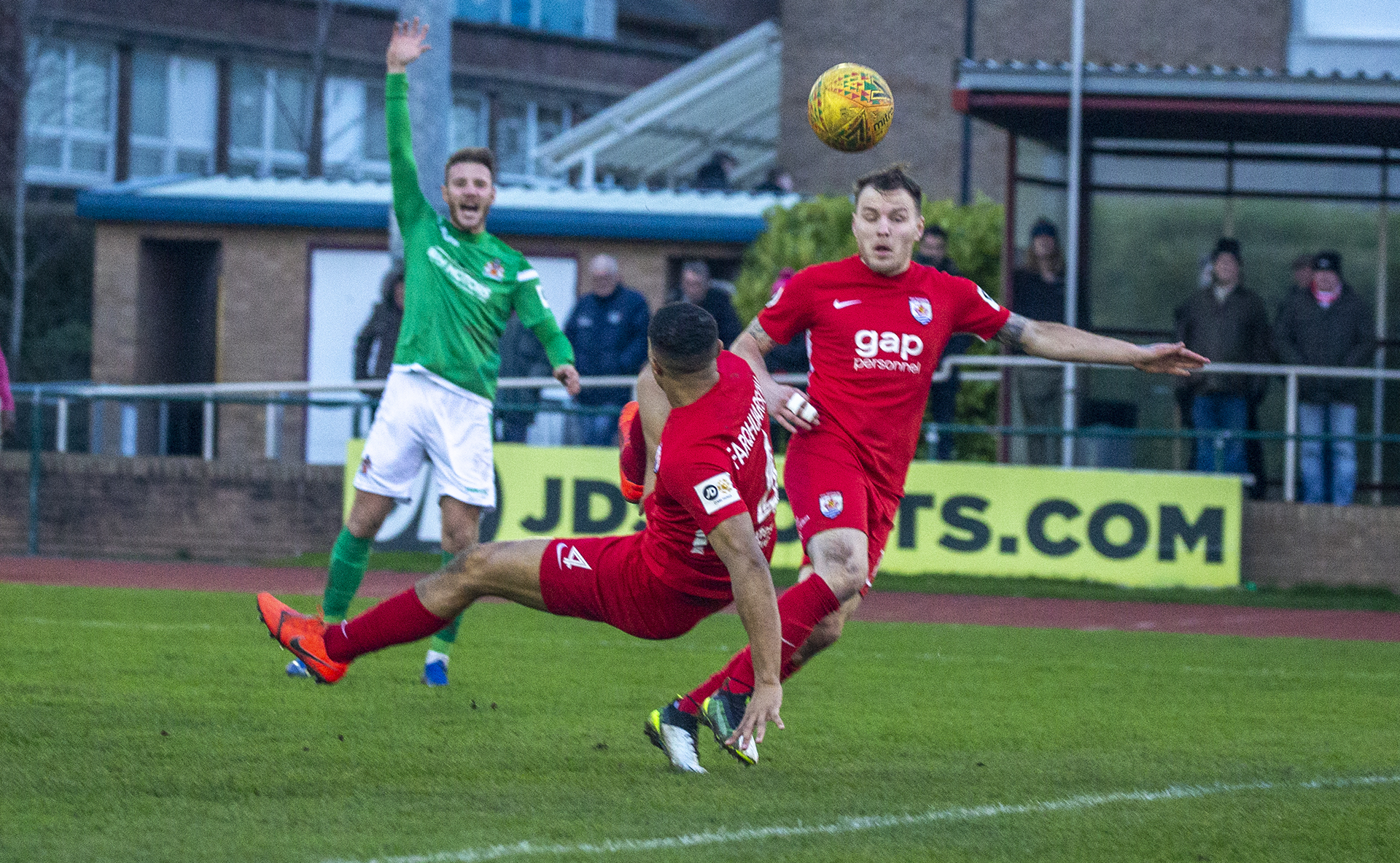 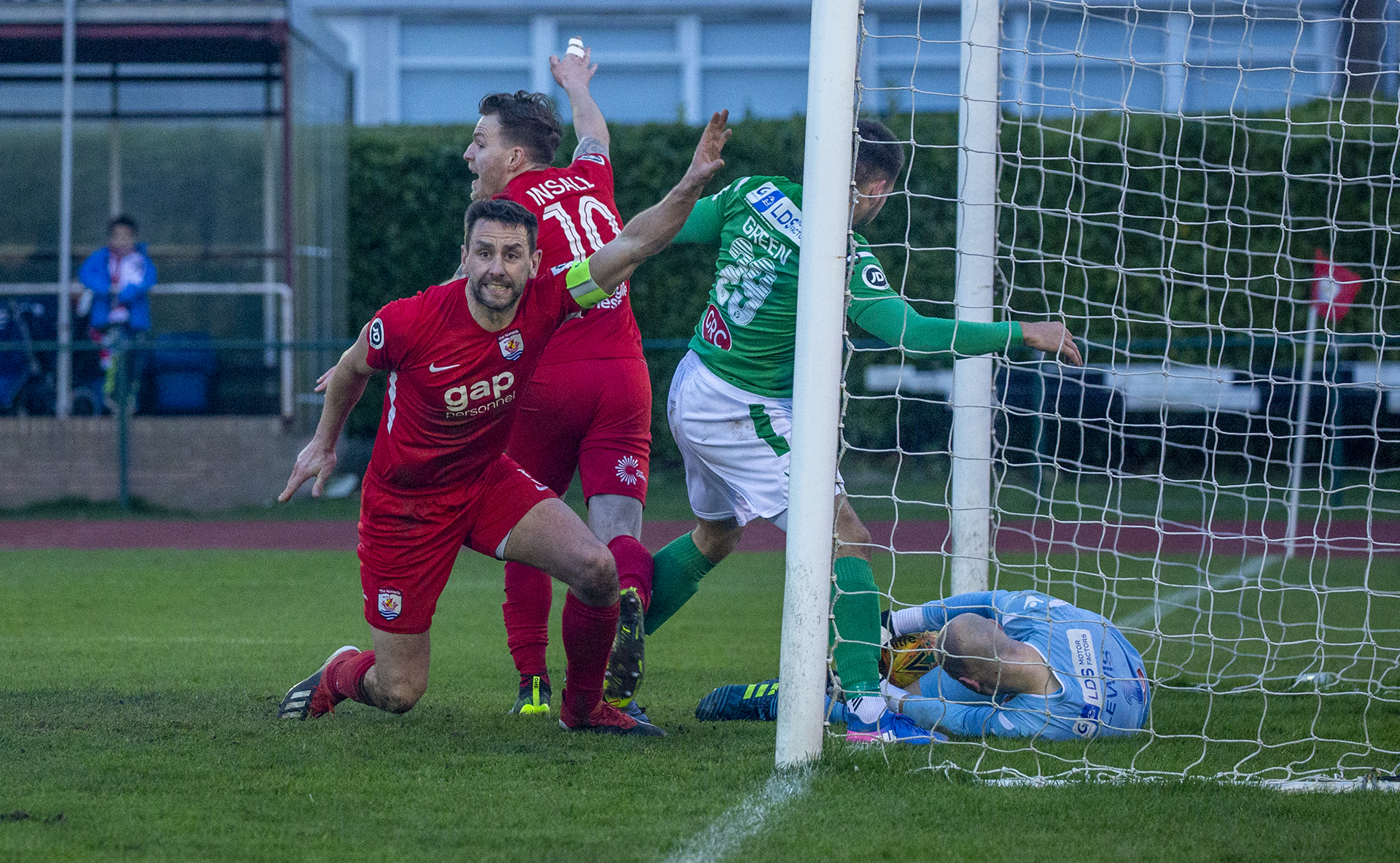 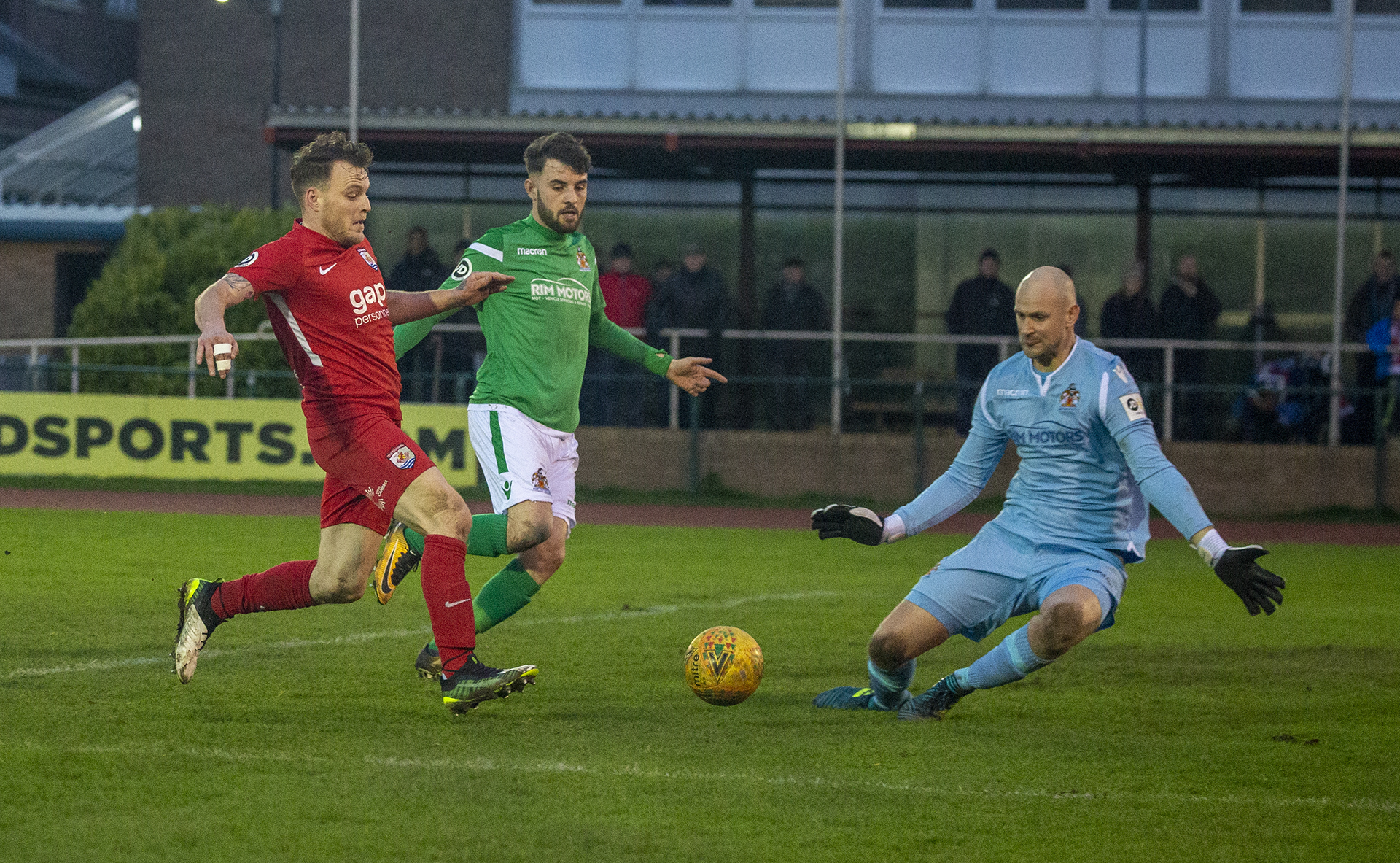