Connah's Quay Nomads defeated Rhyl FC by two goals to nil in the second round of the Nathaniel MG Cup on Saturday afternoon.

Goals in the 22nd and 24th minutes from Nathan Woolfe and Ryan Wignall respectively were enough to put Nomads into the third round of the JD Cymru League's league cup competition.

The game marked Nomads' first domestic game of the 2019/20 season, but was their fifth competitive game of the campaign following an impressive run in the UEFA Europa League qualifying rounds.

They had drawn 3rd place Scottish Premier League finishers Kilmarnock FC and came back from 2-1 down in the first leg to win 2-0 at Rugby Park in a stunning upset victory. Their reward was a tie with Serbian giants FK Partizan, who they lost to by four goals to nil despite respectable performances home and away.

The Nomads headed to Rhyl just nine days after playing Belgrade, with the Lilywhites' Educate Group stadium a highly familiar setting as it had hosted their European ties in July.

Andy Morrison opted to start the likes of Danny Holmes and Callum Roberts in defence, and introduced Ryan Wignall and Nathan Woolfe on the right and left wings respectably to form a fast paced attack with Jamie Insalll leading the line.

The bench included Priestley Farquharson, Danny Harrison, and new signing Kris Owens, who had been announced just two hours before kick off having been cleared to make the matchday squad.

Both sides showed their will to win in the opening stage of the game, with Rhyl winning a free kick from 30 yards out on three minutes and Nomads forcing two early corners, one of which was headed narrowly wide by Declan Poole.

With heavy rain coming down in quick intervals at Rhyl, the Nomads were looking to establish themselves in the game with a number of flowing attacking movements from the likes of Woolfe and Wignall.

On 22 minutes, Nomads took their fourth corner of the game, and it broke the deadlock in unusual fashion as Nathan Woolfe's delivery from the left corner flag went straight into the goal.

Andy Morrison's side were ahead but didn't rest on their laurels, as just two minutes later Ryan Wignall made the most of a defensive slip up from Rhyl to run into the area and slot past keeper Keighan Jones at close range to make it 0-2.

In the 27th the Nomads again went close from a corner after George Horan headed the ball towards goal only for Jones to deny him with a good stop.

In the latter stages of the first half Rhyl hunted for an equaliser, with Horan stepping in to stop Hamilton having a clear run at goal in the 36th minute.

Then, in the 42nd, there was a penalty claim from Rhyl when Horan made a tackle on Cai Owen in the Nomads' area, but referee Tom Owen showed the Lilywhites' man a yellow for simulation.

In one of the last kicks of the first half, Rhyl sent a threatening cross into the Nomads' area, but George Horan was once again there, making a decisive defensive header to clear the danger for his side.

At half time there was a change, with Jay Owen being replaced by Danny Harrison who bolstered the Nomads' campaign for a clean sheet in Rhyl.

The second half saw Nomads take control of the game with some highly efficient attacking moves down the wing coupled with a sturdy defensive set up.

In the 47th Michael Bakare went close to getting on the scoresheet when he headed a Nathan Woolfe cross to see it bound close to the Rhyl goal line but go wide for a goal kick.

Ten minutes later Bakare was once again in the thick of the action, having a shot from six yards out saved before having his follow up effort cancelled out for handball.

With an hour played, the Nomads continued to search for a third goal to solidify their position as the team on top, seeing Ryan Wignall send a powerful effort into the side netting from 12 yards out in the 65th.

Two minutes later Callum Morris was denied from getting on the scoresheet by the feet of keeper Keighan Jones, which blocked his effort from just eight yards out as the Nomads' search for a third went on.

As the game entered its latter stages, Rhyl kept in the competition and looked to threaten the Nomads' goal, but keeper Lewis Brass remained unchallenged thanks to the Nomads' defence.

Changes then saw Bakare replaced by Conor Harwood, and Kris Owens handed his Nomads' debut as he was brought on in place of Nathan Woolfe.

Both players got into the action but were rarely stretched thanks to Nomads' hold on the affair, with a final chance from Rhyl seeing Sam Molyneux connect with a long ball in the Nomads' area but shoot wide in the 87th.

Full time confirmed Nomads' victory and place in the hat for the third round of the competition, in which they have reached the semi final stage for the past four consecutive seasons.

Andy Morrison's sides attentions will now turn to their JD Cymru Premier opener next Saturday 17 August at Deeside against Cardiff Met FC for a 2:30pm kick off. 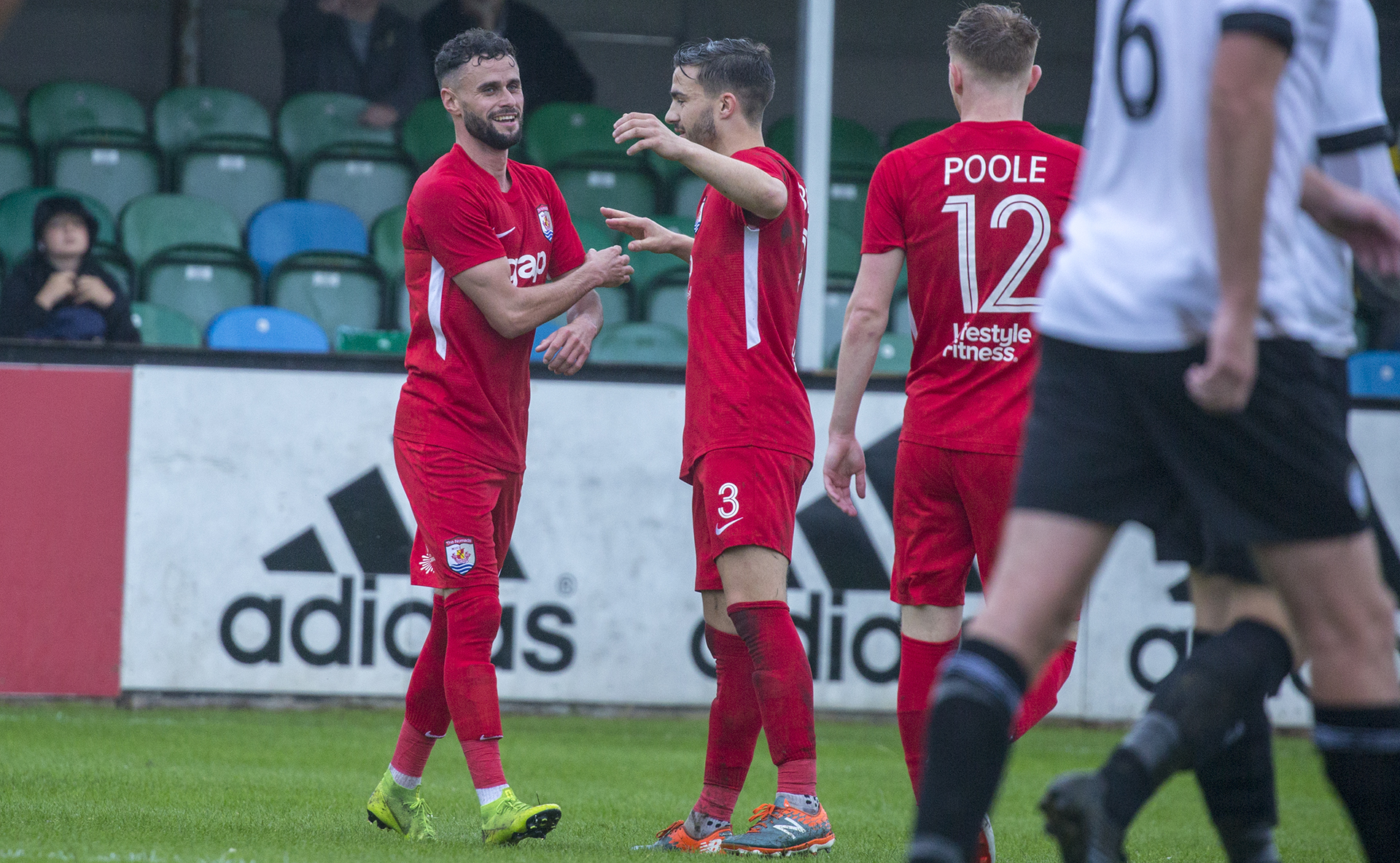 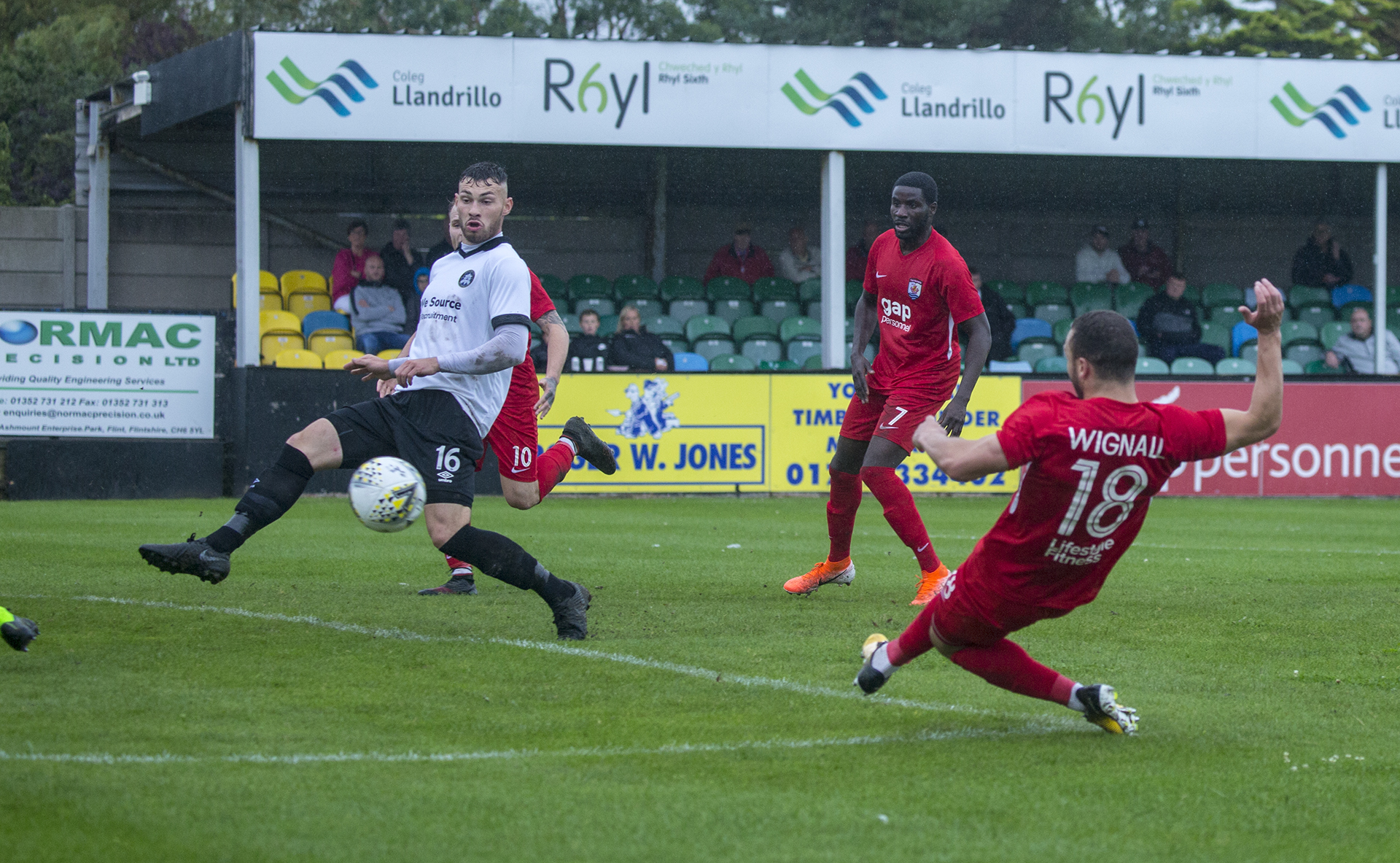 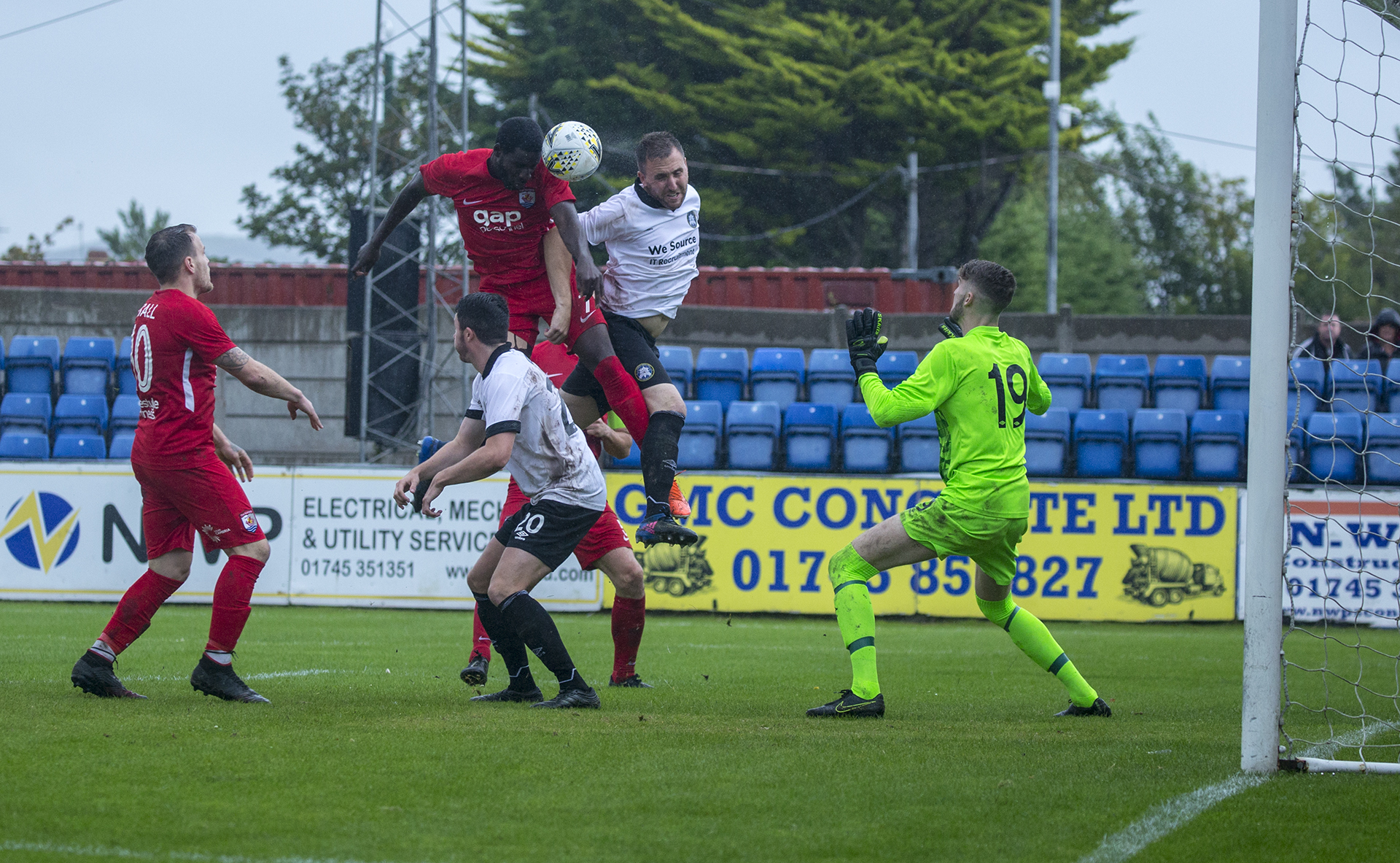 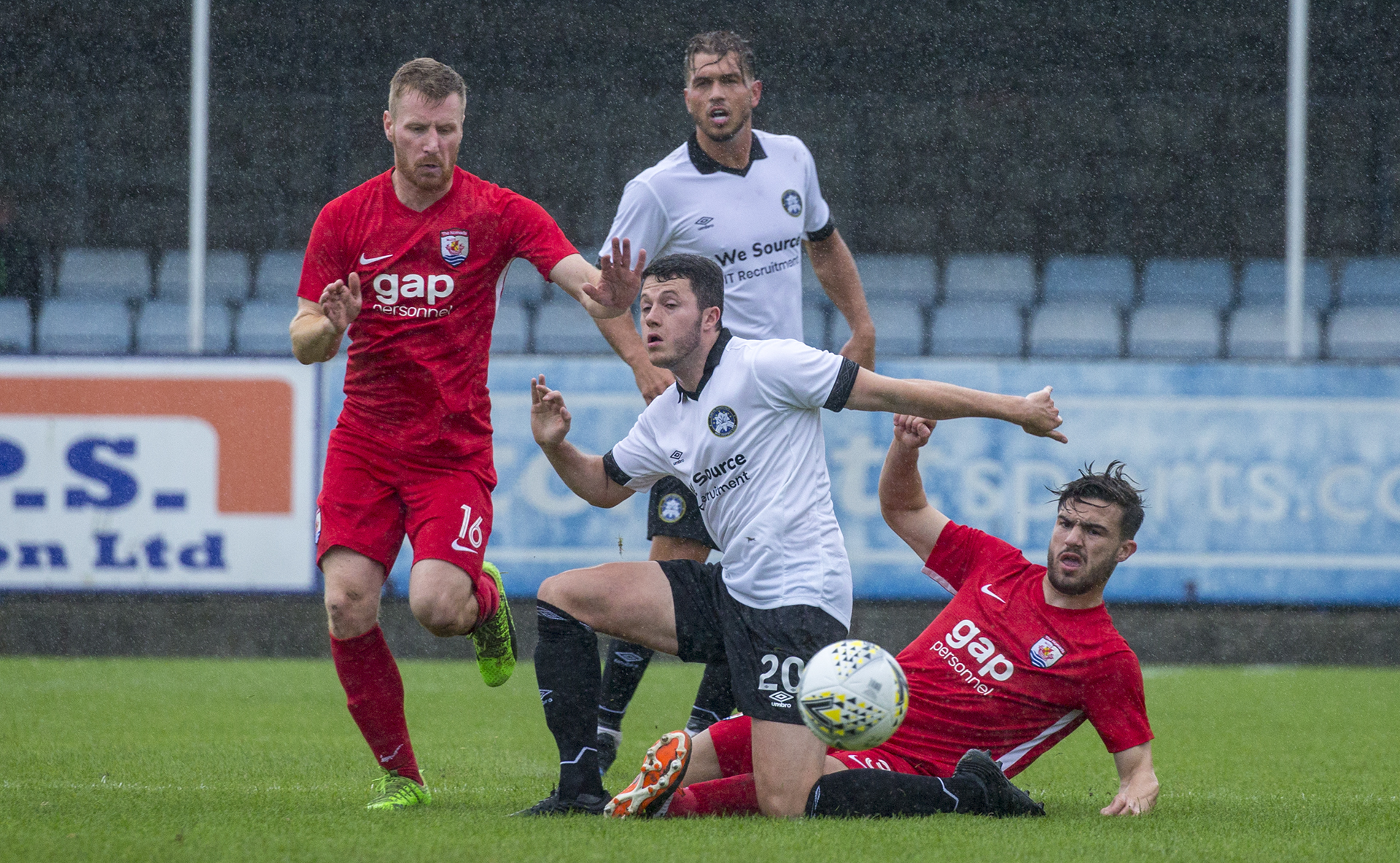 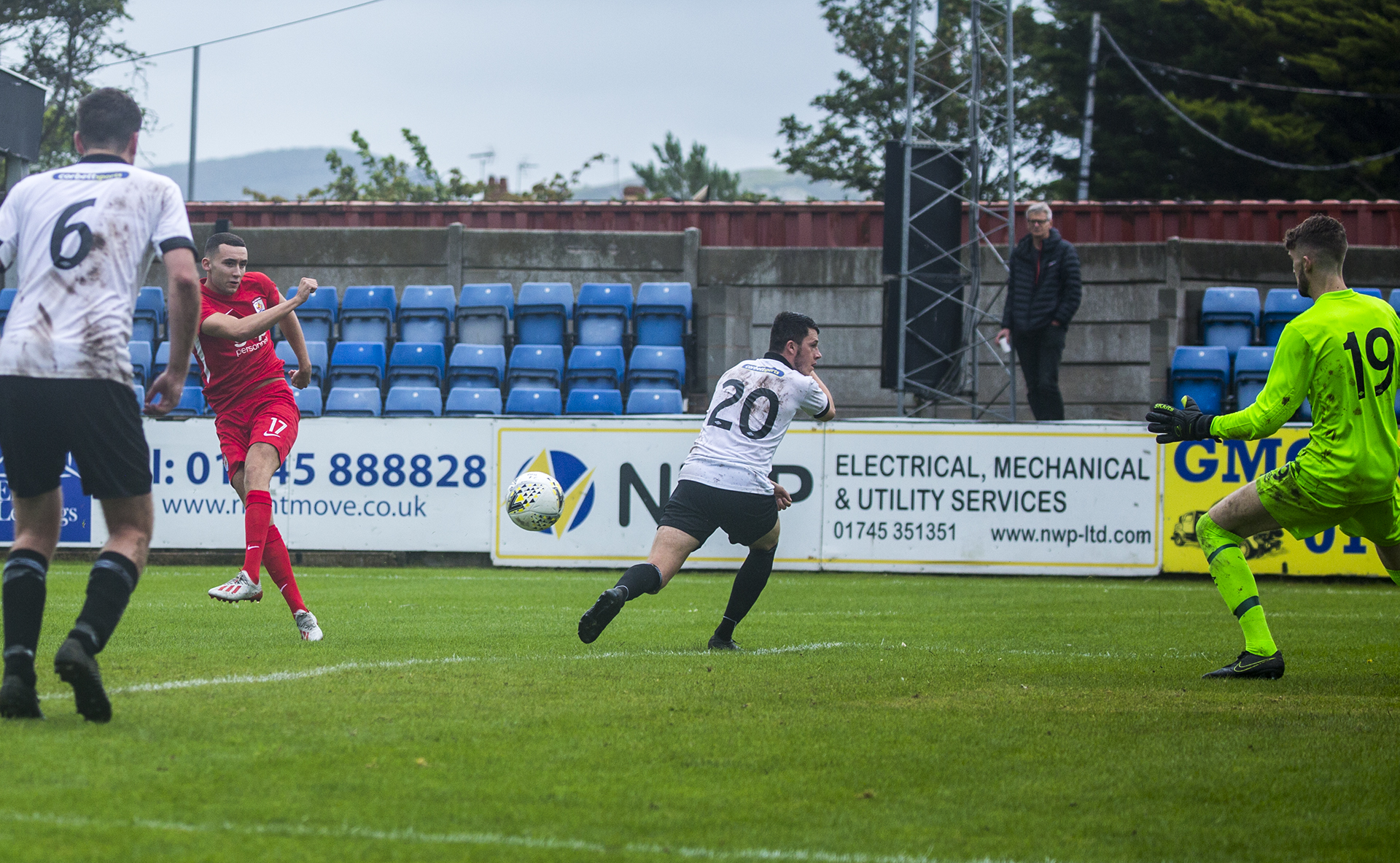