Connah's Quay Nomads progressed to the fourth round of the Tunnocks Caramel Wafer Challenge Cup with a 1-0 victory over Scottish League Two's Cove Rangers on Saturday evening.

A 75th minute Michael Bakare free kick was enough to hand Nomads yet another win against highly-rated Scottish competition.

The game marked Connah's Quay's third foray into the Scottish Challenge Cup competition, and came off the back of their remarkable run to the final in the 2018/19 season.

They had clinched victories against Falkirk, Coleraine, Queens Park and Edinburgh City, going onto lose 3-1 against Ross County at the final held at Inverness Caledonian Thistle. In the previous year, they made their cup debut against Dumbarton, who they took to extra time at 1-1 only to be denied by a late free kick.

Cove Rangers' trip to Deeside marked their first trip to Wales, and their debut in the competition having been promoted from the Highlands League. They, like Nomads, were unbeaten in their domestic season so far, and sat top of the Scottish League Two as a favourite for promotion.

After overseeing a tough 1-0 win away at Bala Town in the previous week, Andy Morrison made only two changes to his side with Michael Bakare and George Horan replacing Declan Poole and Danny Harrison.

The game, in front of a 327 strong crowd including vocal 'Wee Rangers' support, kicked off evenly as both sides looked to establish themselves on the game.

Cove Rangers found their way into the Nomads' half early on, but were denied chances on goal by the likes of Priestley Farquharson and John Disney.

It was Nomads who had the first major chance, when on six minutes, from a Nathan Woolfe free kick, George Horan had his header blocked close to the goal line, with keeper Stuart McKenzie holding a follow up Michael Bakare strike from 10 yards out.

Connah's Quay began to target the Cove area with long throw ins from Priestley Farquharson, who sent one in in the 12th minute only for it to be countered, with Matthew Smith shooting wide from 10 yards.

Nomads continued to ask questions of the Cove Rangers' defence, with the likes of Callum Roberts and Nathan Woolfe making threatening runs into their area. In the 24th, a long Farquharson throw in went to Wilde, who headed just wide of the right post.

On 29 minutes, Wilde again showed his prowess in the air, this time heading wide of the left post from a wicked Woolfe cross.

With half an hour played Cove Rangers looked to gain more of the ball in the Nomads' final third, but Connah's Quay's ever-tight defence restricted them from any major chances in the first half.

As half time approached, Michael Bakare won Nomads a corner in the 44th minute, which went out for a deep throw that was subsequently dealt with by the Cove defence, meaning the game was goalless for the interval.

The second half started with the same tightness seen in the first half, with the deadlock continuing to see the first major chance come in the 52nd. Cove's Declan Glass shot wide from 14 yards, with Harry Milne then going on a good run into the Nomads' area only to be blocked by Horan from eight yards.

As game reached the hour mark, frustrations were starting to show on both sides, with Jay Owen and John Disney picking up bookings and Cove Rangers continuing to attack the Nomads end without testing keeper Lewis Brass.

Nomads introduced Ryan Wignall and Jamie Insall in place of Jay Owen and Nathan Woolfe for the final 30 minutes, knowing that if the game was to finish a draw at full time, penalties would immediately follow.

There was then a sustained period of pressure on the Nomads goal which saw Jamie Masson send two efforts over the crossbar, and Matthew Smith hit the right post from around seven yards out after a darting run in the 65th minute.

But Nomads saw through the test from the visiting Scotsmen, making their final substitution in the 66th which saw John Disney go off to hand Kris Owens his Deeside debut, following his first appearance in the JD Cymru Premier at Bala.

Having seen out the pressure from Cove Rangers, Nomads hit back to open the game up, with Farquharson having a low driving shot from 20 yards deflected in the 67th.

A minute later, Nomads were causing problems in the away area again as a good cross from Wignall saw Morris hit a shot into the side netting at a tight angle.

Nomads stayed in the Cove Rangers half, seeing Bakare go on a sublime run to the byline in the 74th, when he dragged the ball back to Callum Morris who from seven yards out had his effort blocked on the goal line.

But the 75th saw the deadlock finally broken, as Michael Bakare lined up to take a free kick near the Cove byline, from around 20 yards out. He hit it low and it went under all, including Cove keeper Stuart McKenzie, to send Nomads 1-0 up with 15 minutes remaining.

The latter stage of the game saw the visitors fight well to try and find an equaliser, but one of the best chances fell to Nomads, as in the 81st minute a good move saw Insall set up Owens in front of the goal, but his close range shot was held by McKenzie.

In the 87th, Bakare was looking for his brace as he took a free kick on the edge of the Cove area, but hit it against the wall with Nomads still restricting their opponents from finding a vital late goal.

Three additional minutes of injury time saw Nomads display their experience and ability to stay cool under pressure, as they nullified the threat from a still valiantly attacking Cove side until the final whistle confirmed the win.

The victory continues Nomads' excellent record in the Tunnocks Caramel Wafer Challenge Cup, and leaves them as the only JD Cymru Premier side left in the competition following TNS' defeat to Stenhousemuir on penalties. 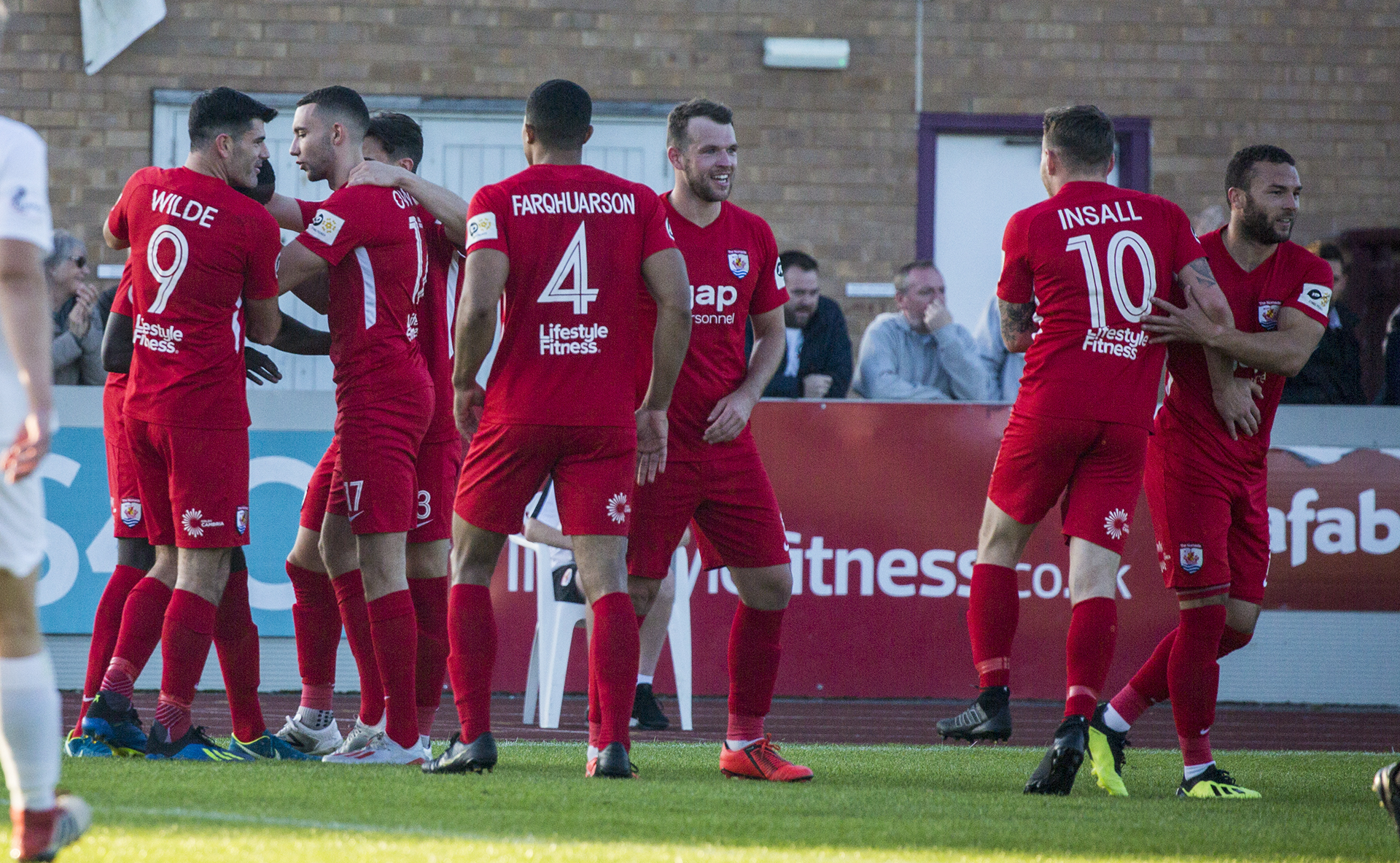 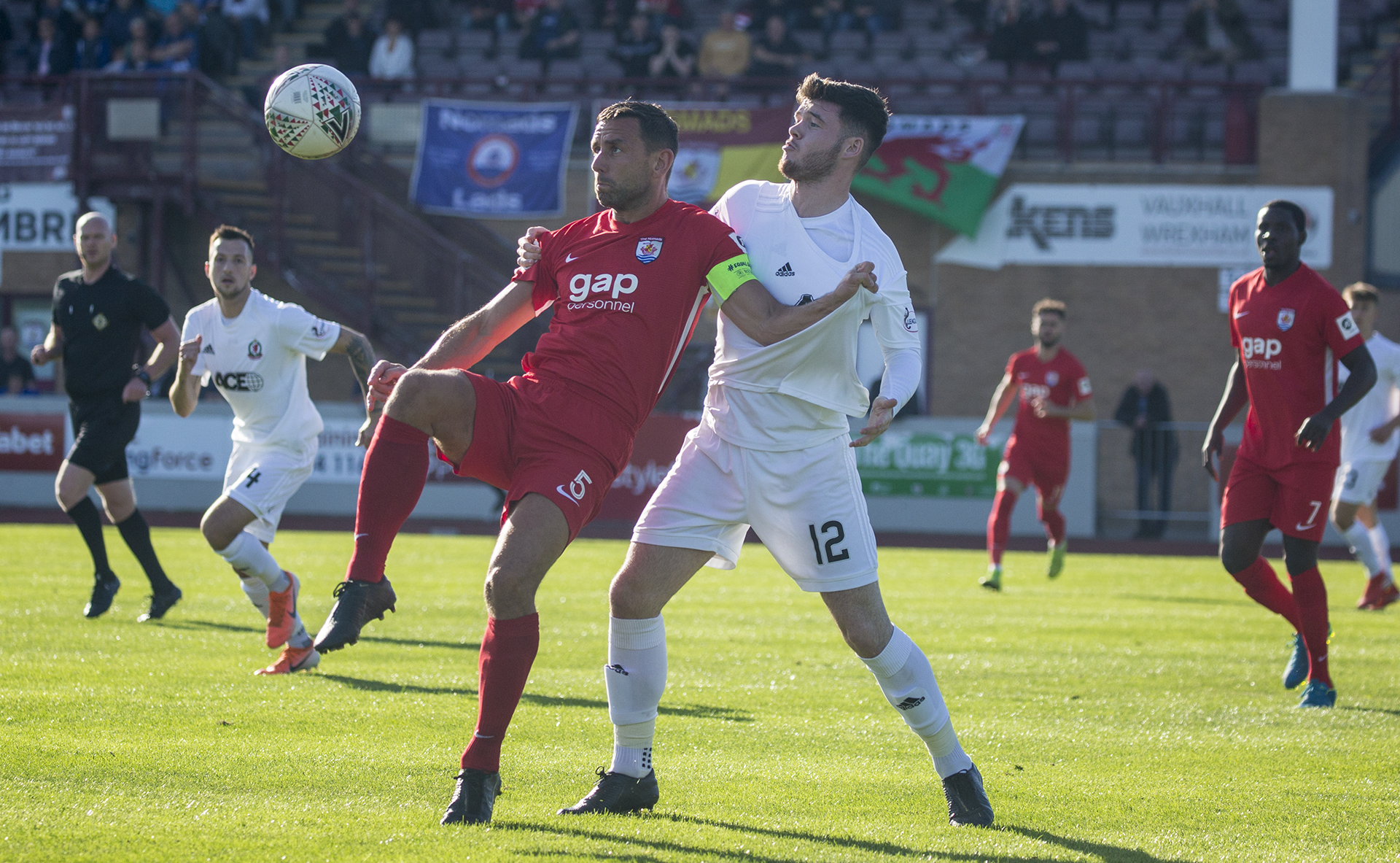 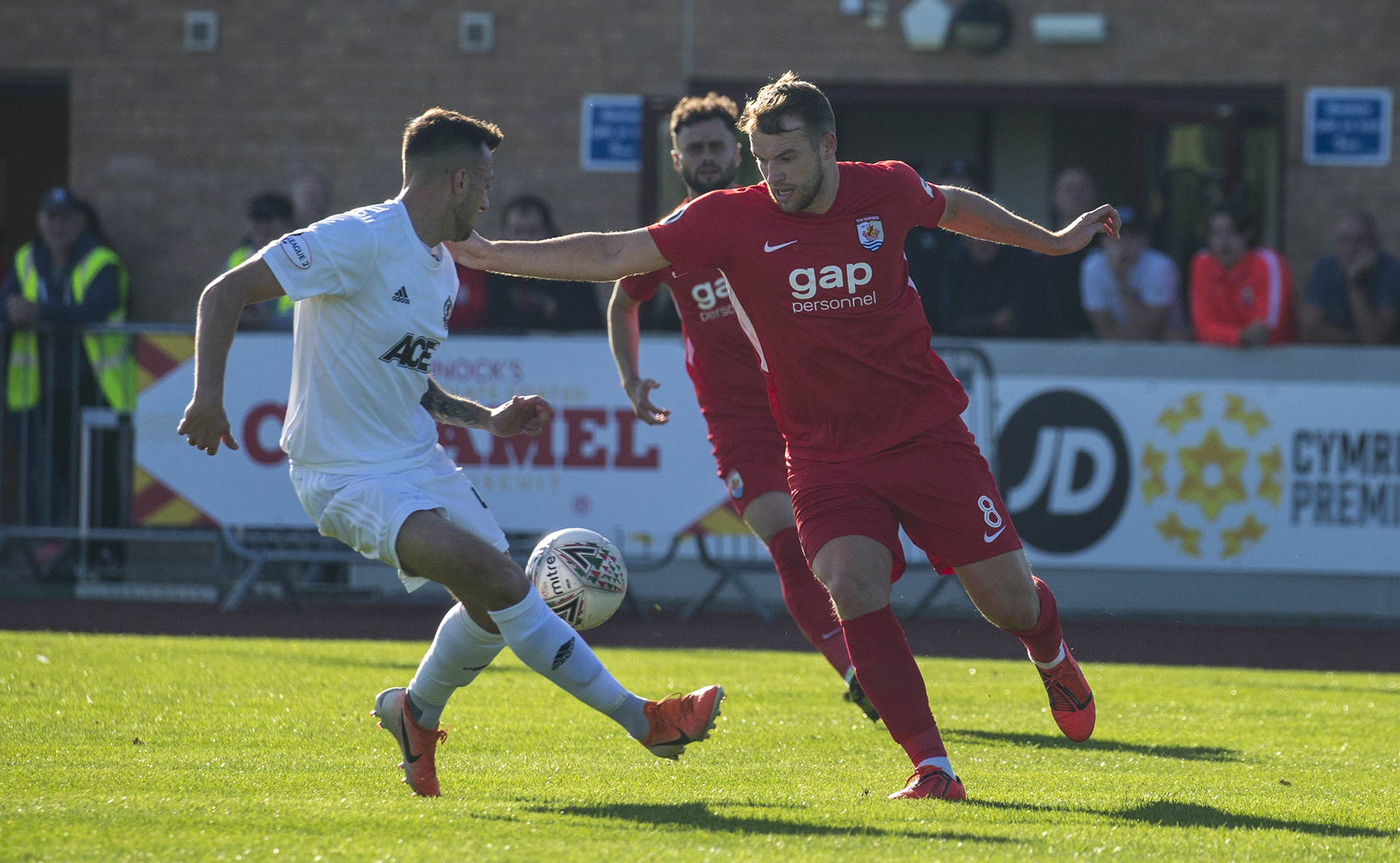 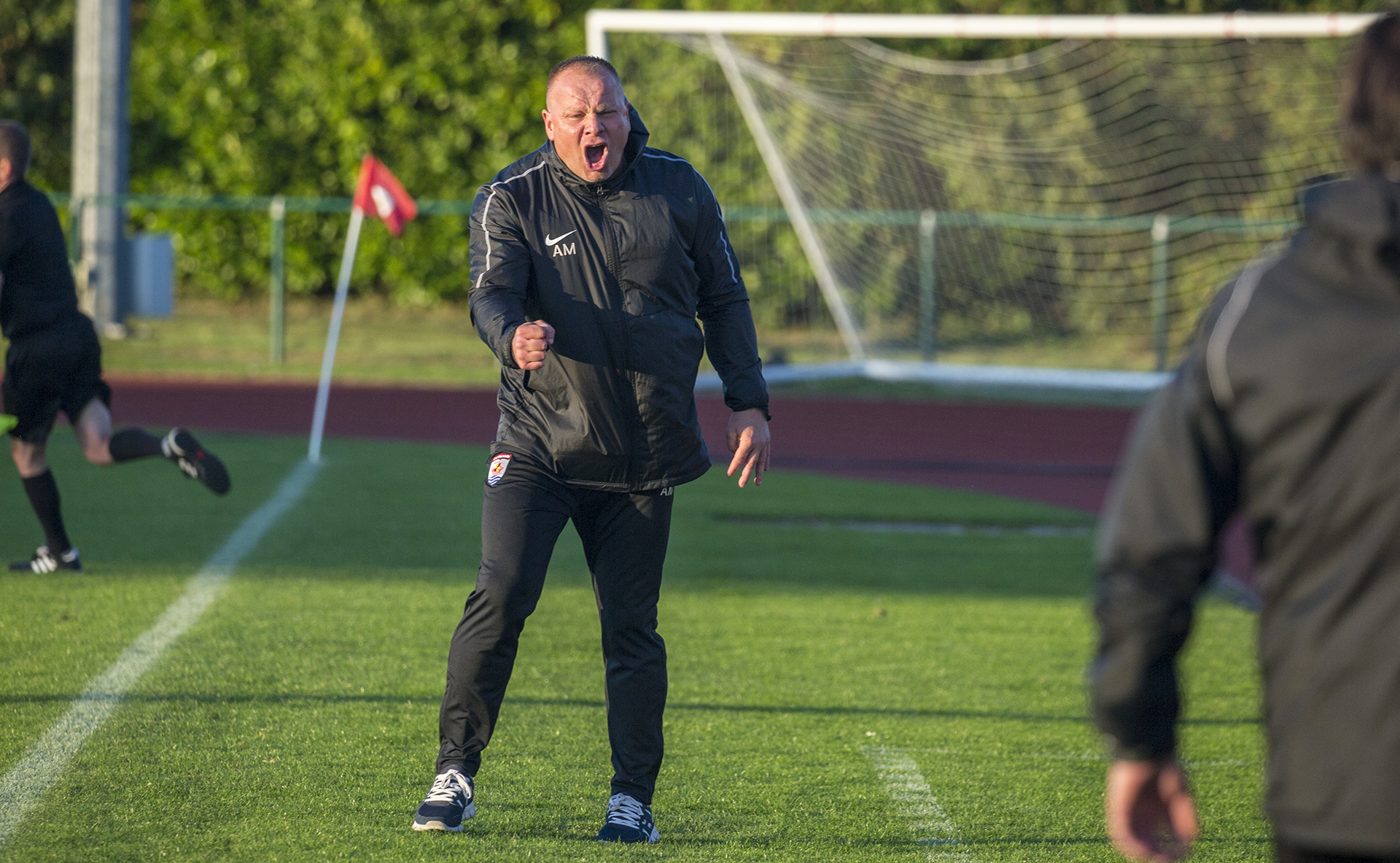