Connah's Quay Nomads secured their place in the final of the Nathaniel MG Cup for the first time in 23 years with a 2-0 win over Bala Town on Saturday afternoon.

First half goals from Callum Morris and Michael Wilde were followed by a resolute performance to see Nomads reach their fourth cup final in 18 months.

The semi final game was a highly familiar one for Nomads, as it marked the fifth consecutive time they had reached the last four of the Nathaniel MG Cup.

Despite this, the last time they secured a place in the final was in 1996, and having lost out narrowly in the past four semis, Andy Morrison's side went out looking to break that spell against Bala at Deeside.

The Connah's Quay manager made only one change from their previous outing, a 3-1 win over Newtown, by introducing Jay Owen in place of Michael Bakare who was named on the bench.

The game started with Bala attacking the Nomads' end through crosses from the likes of Steven Leslie, but none threatened keeper Lewis Brass in goal.

Danny Holmes looked for Declan Poole when he was taking a throw in near the Bala end in the 7th minute, but this was cleared away to keep the opening stage of the game tight with few chances at either end.

This all changed when Jamie Insall chased after a high ball sent up by Wilde, and was brought down by Sean Smith as he entered the area.

Referee Rob Jenkins pointed to the spot, and Nomads' resident penalty taker Callum Morris stepped up and delivered to make it 1-0 in the 12th minute.

Boosted by their opener, Connah's Quay continued to attack the Bala end, winning three corner kicks in the following 10 minutes.

Jamie Insall then went for Nomads' second in the 19th, dispossessing a defender to run straight at goal, but his low strike from 15 yards out was blocked by keeper Josh Tibbetts.

The visiting Lakesiders were seeking an equaliser at every opportunity, going closest in the 23rd when a Lassana Mendes header was headed off the line by George Horan.

But despite that chance, the Nomads were frustrating Bala with their disciplined defensive shape limiting their sight on goal throughout the first half.

With half an hour played, Andy Morrison's side were holding onto their lead as half time approached, with Danny Harrison clearing a cross into the Nomads area in the 37th, and Lewis Brass holding a Steven Leslie effort two minutes later.

Nomads replied to Bala's pressure in the best way possible, scoring on the brink of half time via Michael Wilde in the 43rd minute.

Starting with a Danny Holmes throw in from the right wing, the ball fell to Declan Poole in the Bala area whose shot wasn't quite held by Tibbetts, allowing Wilde to score from close range.

Following the break, Nomads started the second half brightly, with Jamie Insall causing problems for the Bala defence with his pacy runs into the final third.

In the 51st minute, Bala went close when a free kick technique from the training ground saw Lee Molyneux shoot towards the bottom left corner and Brass push it away with his fingertips.

Three minutes later, the visitors had one of their best chances of the game when Louis Robles got in front of the Nomads' goal from seven yards out and hit the crossbar.

As the hour mark approached, Nomads were maintaining their hold on the game, working hard to stop Bala's efforts to find a way back into the semi final affair.

Sameron Dool was proving a handful in the midfield, and had a go at goal in the 64th, which went just wide from 20 yards out. In the 65th, Mendes again had a close range header, but it hit the side netting as Bala's search for a goal went on.

On 67 minutes Andy Morrison made a double substitution, bringing on Michael Bakare and John Disney in place of Jamie Insall and Sameron Dool.

In the 77th, Bala sent a dangerous free kick into the Nomads' area, but Lewis Brass rose highest in the box to punch the ball away. His clearance started a counter attack from Declan Poole, who went on a great run into the Bala area before he was tackled at the last moment.

After the 80th minute, Nathan Woolfe was introduced in place of Callum Roberts, and had an instant impact as he got into the Bala area to help hold the ball up in the 84th.

With five minutes of normal time separating Nomads from their first Nathaniel MG Cup since 1996, Andy Morrison's side kept their cool to stay in control until the final whistle.

The victory means Nomads will face the JD Cymru South's STM Sports in the final following their 2-1 win over Aberystwyth Town. The game will be played at a venue to be announced on Saturday 1st February.

Connah's Quay Nomads now move onto a trip to South Wales to face Penybont in the JD Cymru Premier on Saturday 30th November for a 2:30pm kick off. 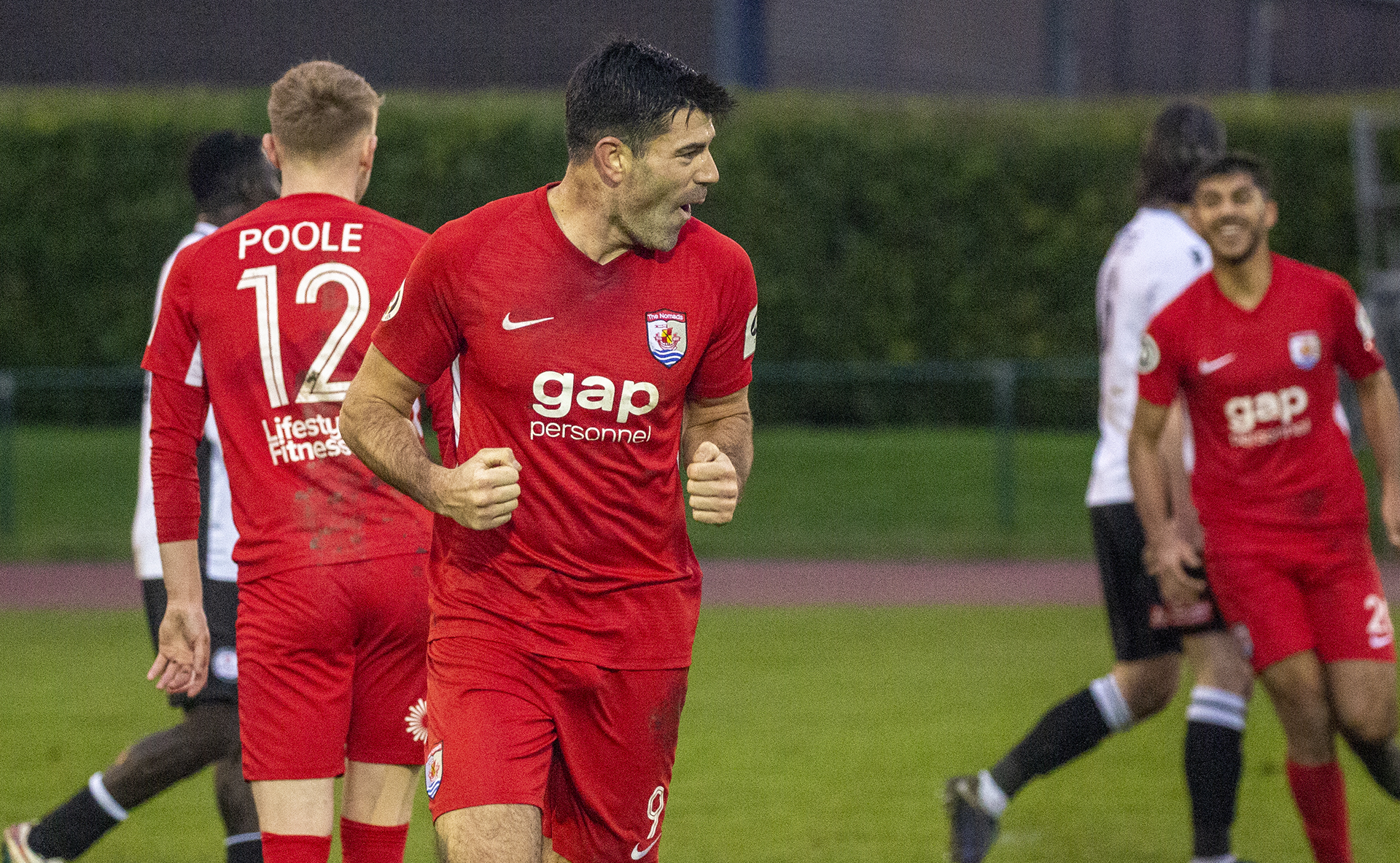 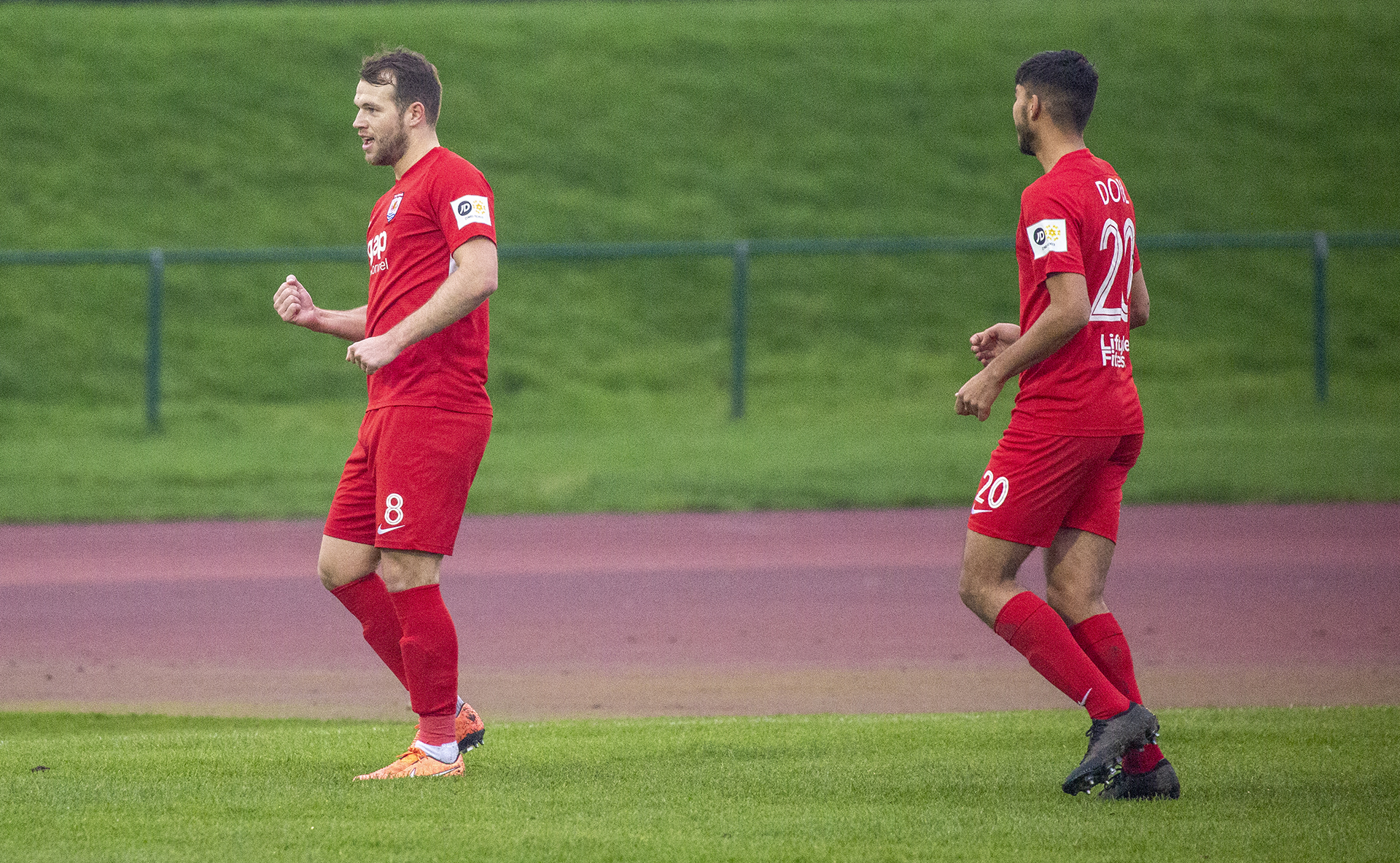 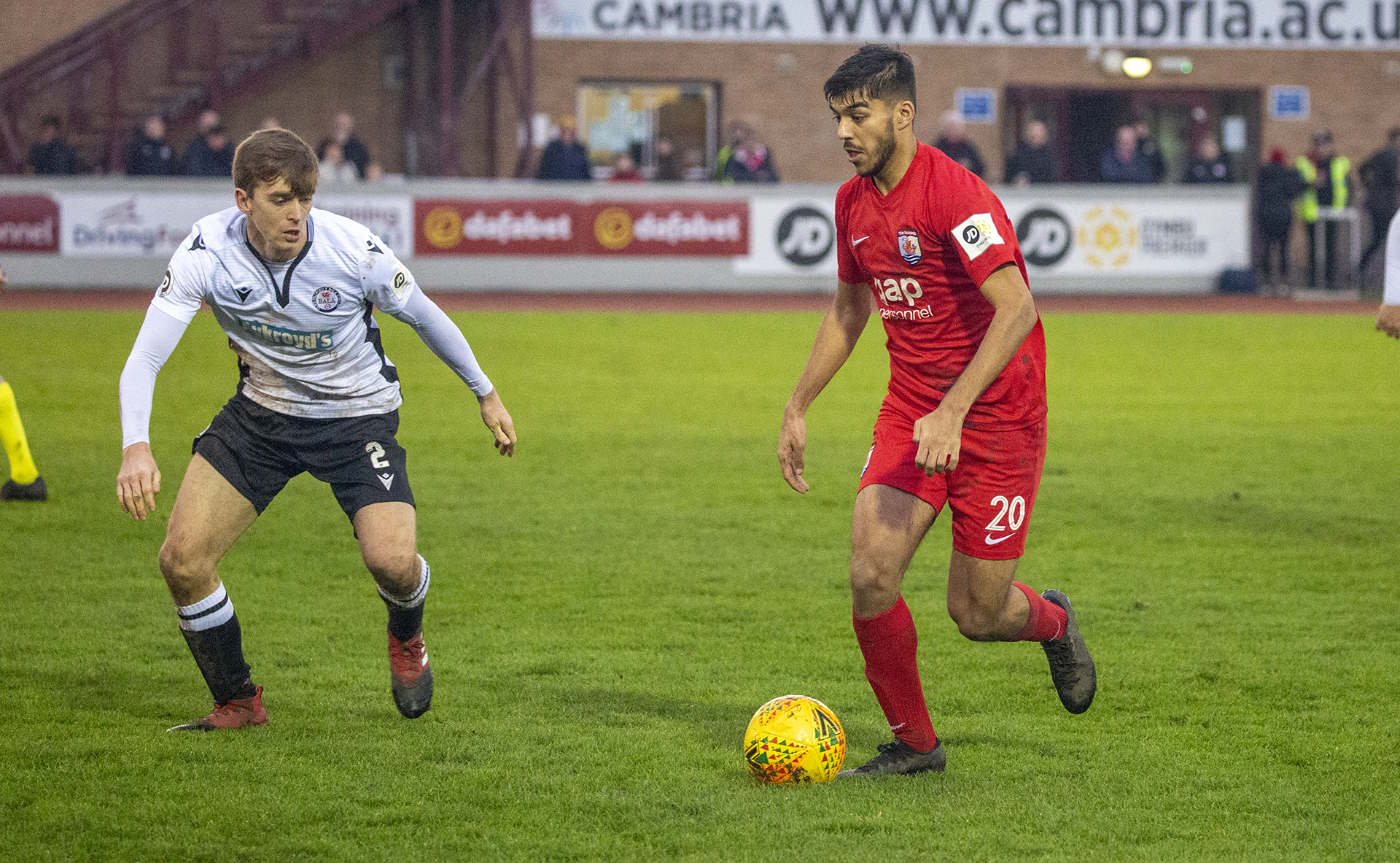 Sameron Dool goes on the offensive for The Nomads | Photo: Tom Houghton 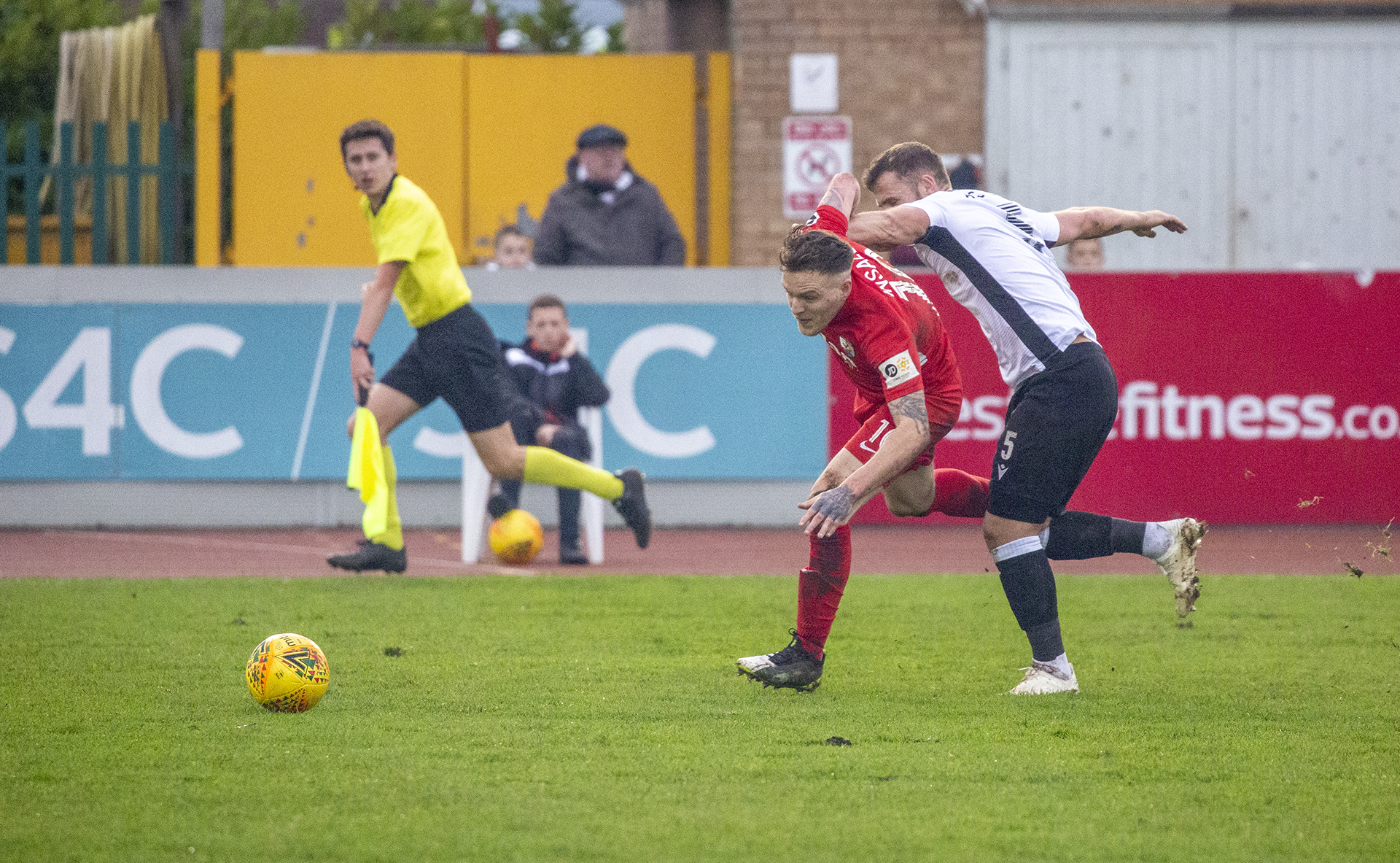 Jamie Insall battles to get behind the Bala defense | Photo: Tom Houghton 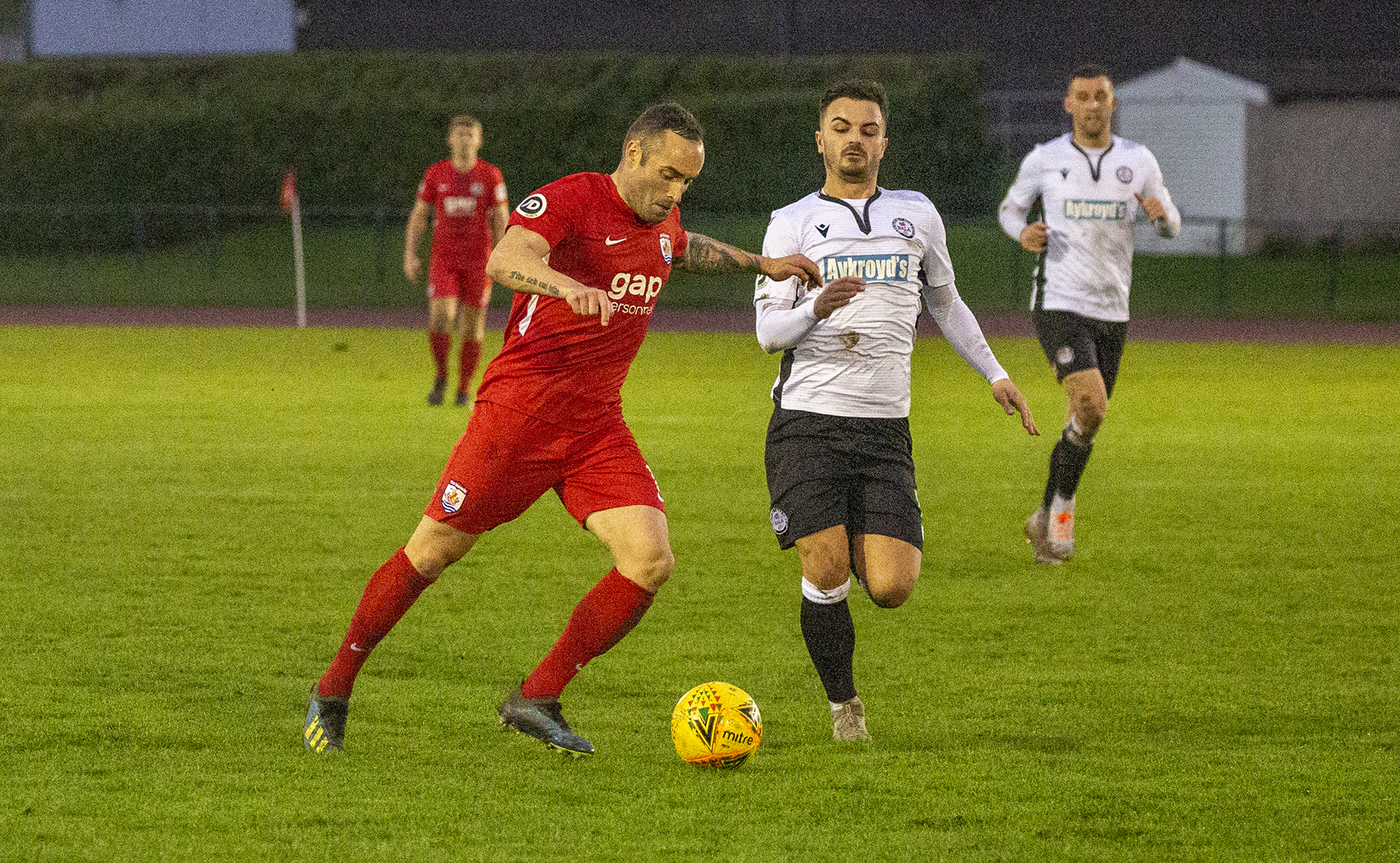