A 94th minute equaliser from Sameron Dool saw Connah's Quay Nomads draw 1-1 with Bala Town in their first game of the JD Cymru Premier on Saturday evening at Deeside.

The match marked the start of the Nomads' title defence as their inaugural game of the JD Cymru Premier season, which started as their previous one had ended; against close rivals Bala Town.

Since then, both sides had gone onto notable successes, with Nomads clinching the league championship after the curtailing of the 19/20 campaign and going onto make their Champions League debut in Cardiff, against Bosnian champions FK Sarajevo.

Bala Town meanwhile came into the game flying high off the back of their first ever win on the continent from a 1-0 victory over Valletta of Malta.

Andy Morrison gave a start to the league's newly crowned Young Player of the Season, Priestley Farquharson, along with his new signings Danny Davies and Aeron Edwards.

Michael Wilde meanwhile made his 300th appearance in the top flight and his 88th start for Nomads since joining the club in 2015.

Played in line with the FAW's safe return to play protocol, the game was played behind closed doors, with only limited personnel inside the stadium during the season opener.

After both sides kneeled in support of the Black Lives Matter movement, the game began and Sameron Dool won a corner kick early on, with former Nomad turned Bala defender Sean Smith booked for an early challenge in the Nomads half.

This bright but controlled start from Nomads and Bala meant the game went without major chances in the opening stage, with Farquharson targeting the Lakesiders' end with his long throw ins into their final third.

The deadlock was however broken on 21 minutes, when Peate sent a looping header over Lewis Brass to send the visitors 0-1 up.

Nomads looked to cancel this goal out quickly with runs from Danny Davies down the wing, one of which saw him reach the Bala area in the 24th only for his shot to go wide.

Craig Curran was also looking to cause problems for the Bala defence upfront, but couldn't quite find that clinical finish Nomads needed to get back on level terms before the interval.

Nomads' eagerness for an equaliser was clear early on in the second half, with Dool taking two corner kicks within six minutes of the restart. This led to a bicycle kick from Aeron Edwards at close range which was on target, but blocked in a busy Bala box on 53 minutes.

On the hour mark, Farquharson had one of Connah's Quay's best chances, heading just over from a well placed cross via Dool.

But Bala's reply to this was almost instant, with Chris Venables breaking clear on goal just seven yards out with Lewis Brass making a stop to deny him at close range.

In the 68th Bala were still on the front foot and looking to take the game away from Nomads, but Will Evans' strike from around 20 yards out sailed out for a goal kick.

With 20 to play Nomads were well in the game, but found themselves frustrated in the final third as Bala dug their heels in to hold out the scoreline at Deeside.

Andy Morrison then made his second substitution, bringing on Kris Owens in place of Danny Harrison to further drive Nomads into the Bala area.

Owens proved effective in swinging crosses and set pieces in, with pressure from Nomads seeing the ball scramble inside the Bala end regularly, but with ten minutes to play Nomads still found themselves trailing.

They continued to push for a late opener, nearly levelling in the 90th when a corner kick for Nomads was headed at close range by Aeron Edwards, who rose highest in a packed box, only to see Bala keeper Alex Ramsay stop the ball on the line.

In the 92nd, Nomads won another corner which was taken by Owens but cleared by Bala, who looked all but set to take three points home from Deeside.

But deep into stoppage time on 94 minutes, Sameron Dool received the ball from around 30 yards out before striding forward and curling a sensational 25 yard strike into the top right corner past a helpless Ramsay.

The goal confirmed a dramatic draw for Nomads, who now move onto Europa League action facing Georgian champions Dinamo Tbilisi on Thursday evening at Wrexham's Racecourse ground for a 6pm kick off. 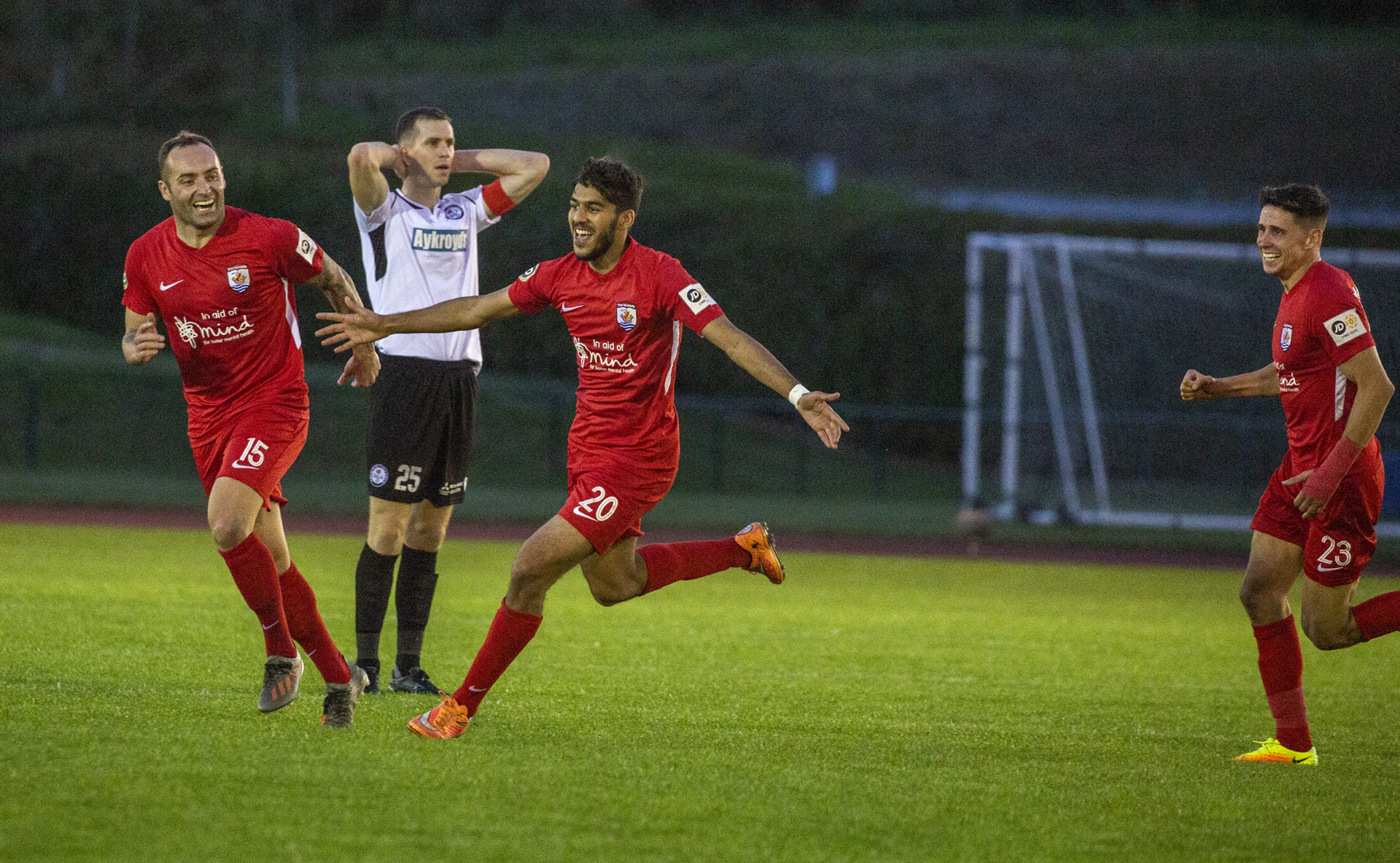 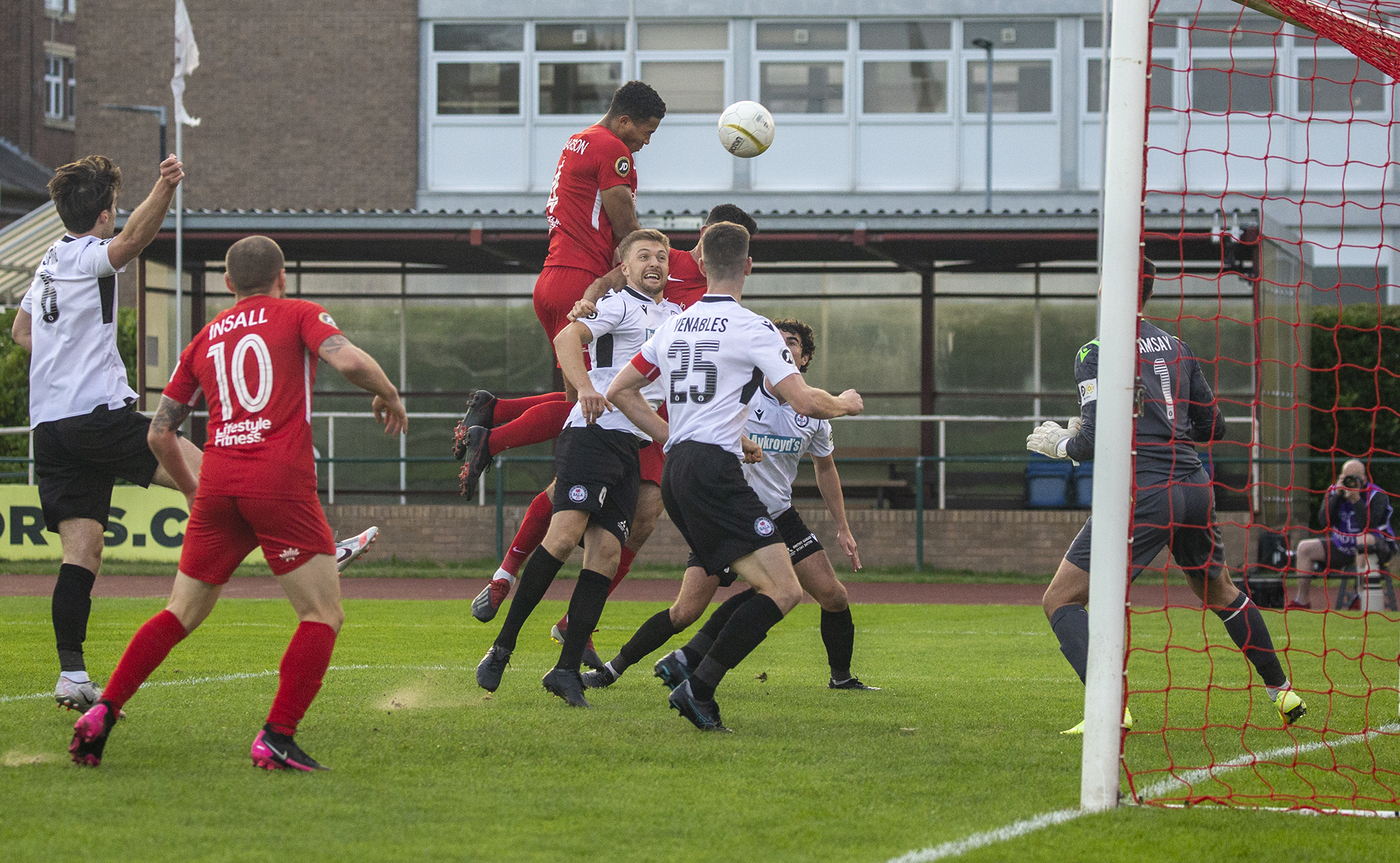 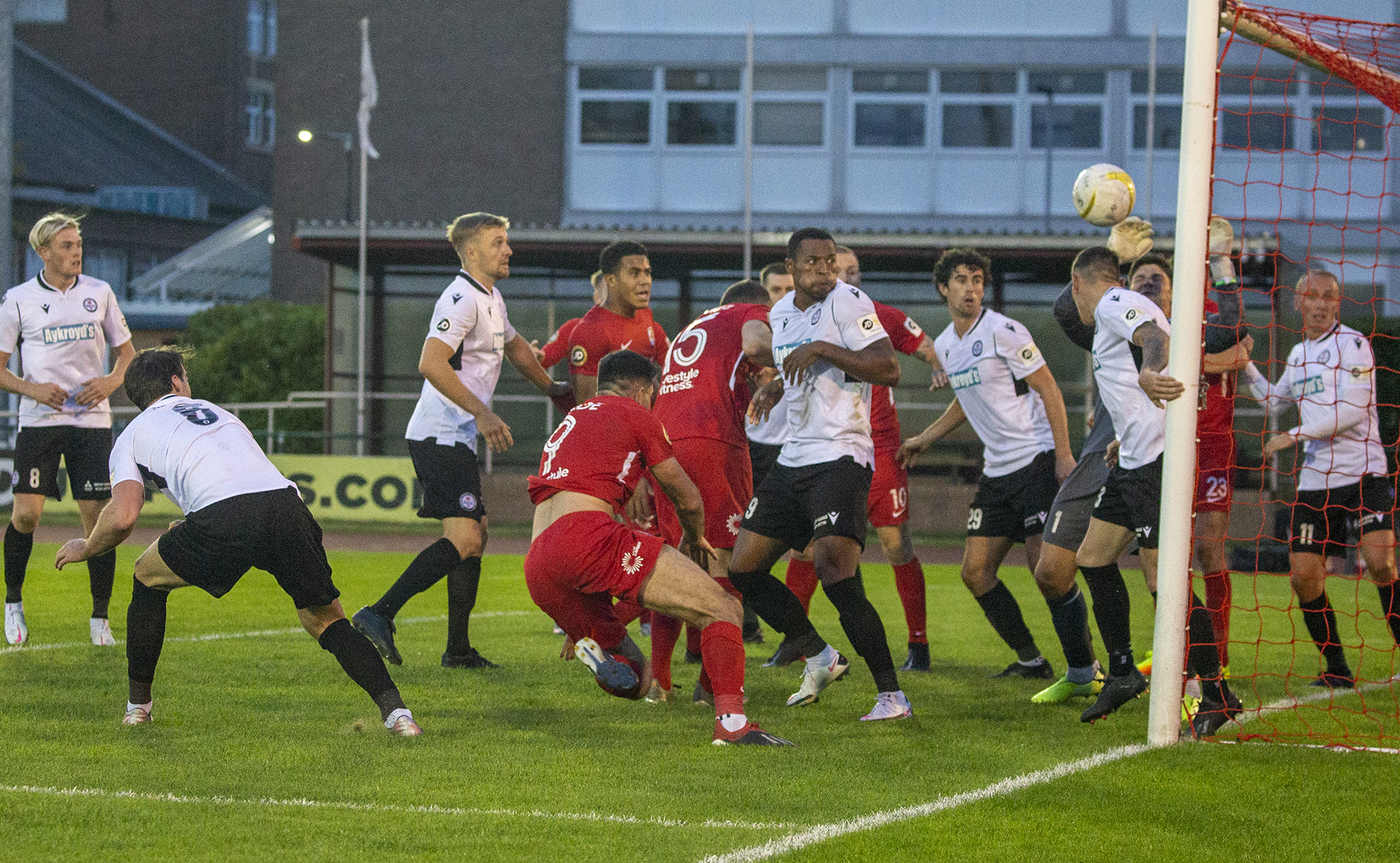 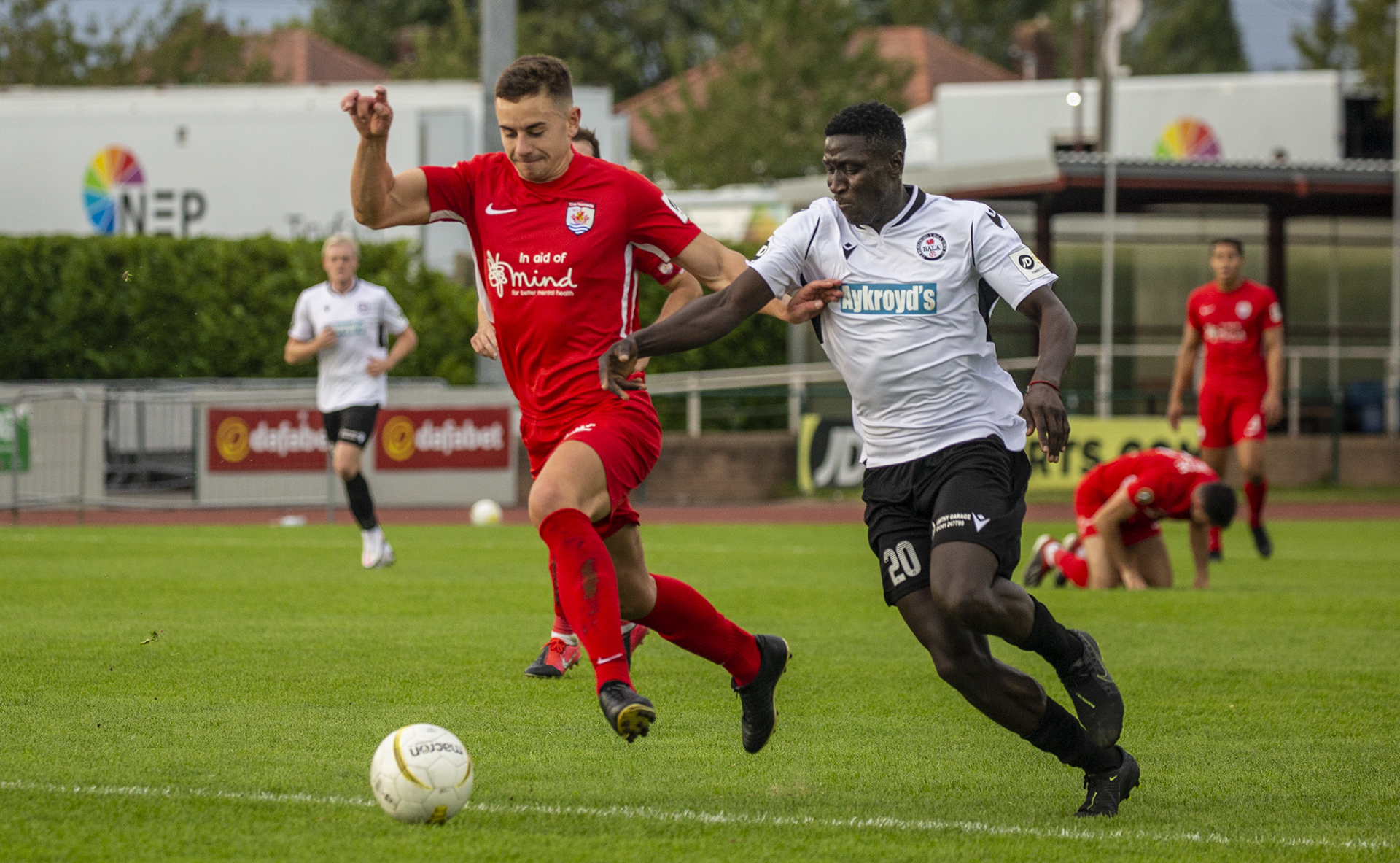 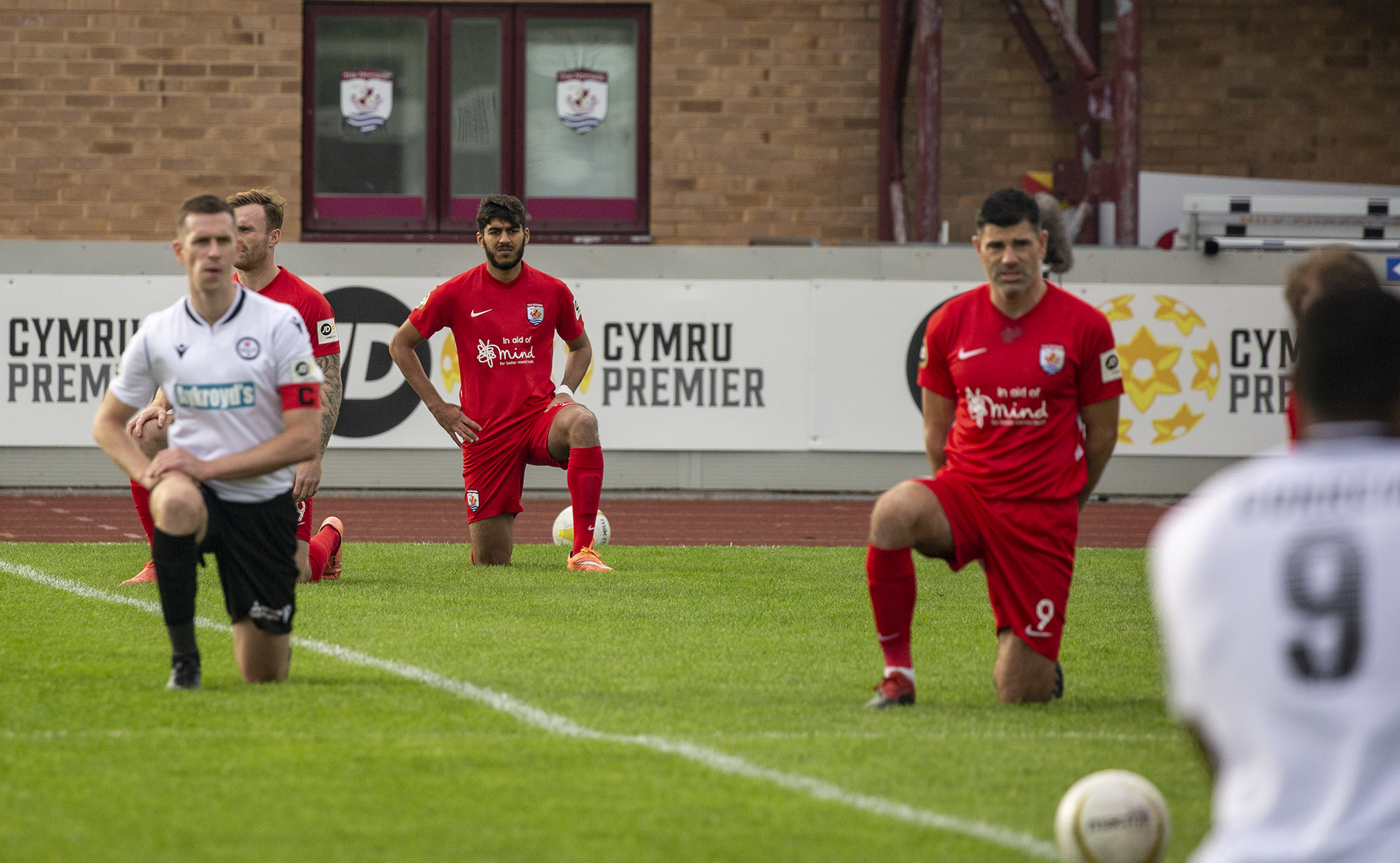 #BlackLivesMatter before kick off | © NCM Media