Connah's Quay Nomads continued our dominant pre-season form with a 2-0 victory at Newtown on Friday night thanks to second half goals from Michael Wilde and Jamie Insall.

The Nomads wasted no time in testing Dave Jones in the Newtown goal with Sameron Dool playing in Michael Wilde in just the second minute with Jones saving Wilde's left-footed effort to give The Nomads an early corner. Just three minutes later saw Craig Curran start a move from inside the centre circle, setting John Disney and Sameron Dool free down the right wing with the latter crossing to Curran who arrived late in the box, volleying just over Jones' goal as The Nomads started the game strongly.

A minute later came Newtown's only real sight of goal in the first half as some neat play down the left wing saw a cross in to an unmarked Morris in the middle of the goal who headed over The Nomads' goal.

Just before the 20 minute mark, Dool broke into the Newtown box, rounding the onrushing Dave Jones, however Dool was forced wide and as he regained control of the ball a number of Newtown bodies had thrown themselves in front of the ball to prevent him from picking out Michael Wilde in the middle of the box for a simple tap-in.

Just three minutes later and there were shouts for a penalty as Craig Curran was clattered into whilst challenging for a header - despite the strong physical contact, Curran was still able to nod down to Priestley Farquharson who turned to shoot just over the bar as The Nomads continued to put pressure on.

In the 32nd minute, Sameron Dool played in a corner to the near post where Danny Davies headed towards goal, only to see his effort cleared off the line - a goalmouth scramble followed but the ball just wouldn't fall for The Nomads and Dave Jones eventually gathered the ball. Seven minutes later and The Nomads thought they had taken the lead when Priestley Farquharson tapped the ball in from inside the six-yard box, only for referee Iwan Griffith to rule the goal out for a foul on Dave Jones by John Disney in the build up to the goal.

The Nomads' final chance of a dominanet first half came on the stroke of half time as Craig Curran picked out Danny Davies at the back post who headed just wide of Dave Jones' goal. Iwan Griffith blew for half time with the scores level but The Nomads knowing that they could have already scored three or four.

Second half goals win the game

Three changes were made at half time as Oliver Byrne, Jay Owen and Kris Owens replaced Lewis Brass, Danny Harrison and Callum Roberts for The Nomads and the pressure continued in the early stages of the second half - just six minutes in and Craig Curran picked out Michael Wilde inside the box, who saw Dave Jones tip his header just over the bar and from the resulting corner, Wilde headed just inches wide again.

It was in the 62nd minute that The Nomads finally got the breakthrough that our play deserved. John Disney was fouled on the right wing and from the resulting free kick, Sameron Dool floated a delightful ball to the back post which saw Michael Wilde arrive with a bullet header high into the roof of the net to give the visiting Nomads the advantage.

The 69th minute saw Oliver Byrne have his only real save of the evening as ex-Nomads Nick Rushton sent a tame effort straight at him from outside the box. Jamie Insall who had replaced Craig Curran on the hour mark was soon involved and headed an effort on to the roof of the net in the 70th minute before getting on the scoresheet himself in the 74th minute. Aron Williams produced a neat bit of play down the right wing sending a cross low into the Newtown box - after a bit of pinball inside the box, the ball fell to Insall who poked home from close range to double The Nomads' advantage.

The Nomads nearly added to their goals in the following minutes as a John Disney effort was blocked by a lunging defender and Insall was denied a second as Danny Davies broke down the left wing picking out Insall who headed for goal only for Dave Jones to tip the ball wide for a corner.

Full time signaled a thoroughly dominant performance from The Nomads who produced some fine football throughout the night at Latham Park and the result could have been more emphatic had some of the chances found the target on the night. 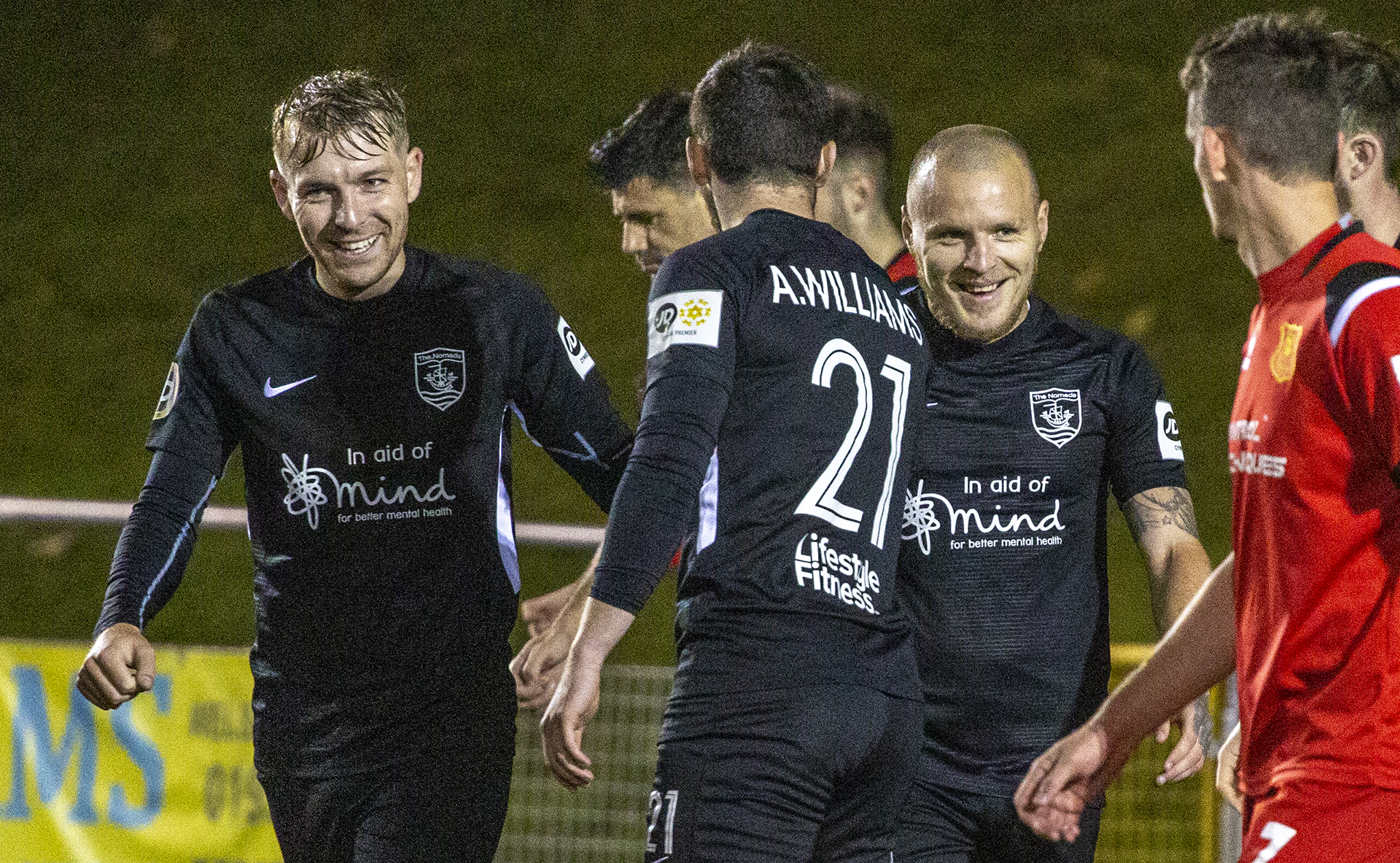 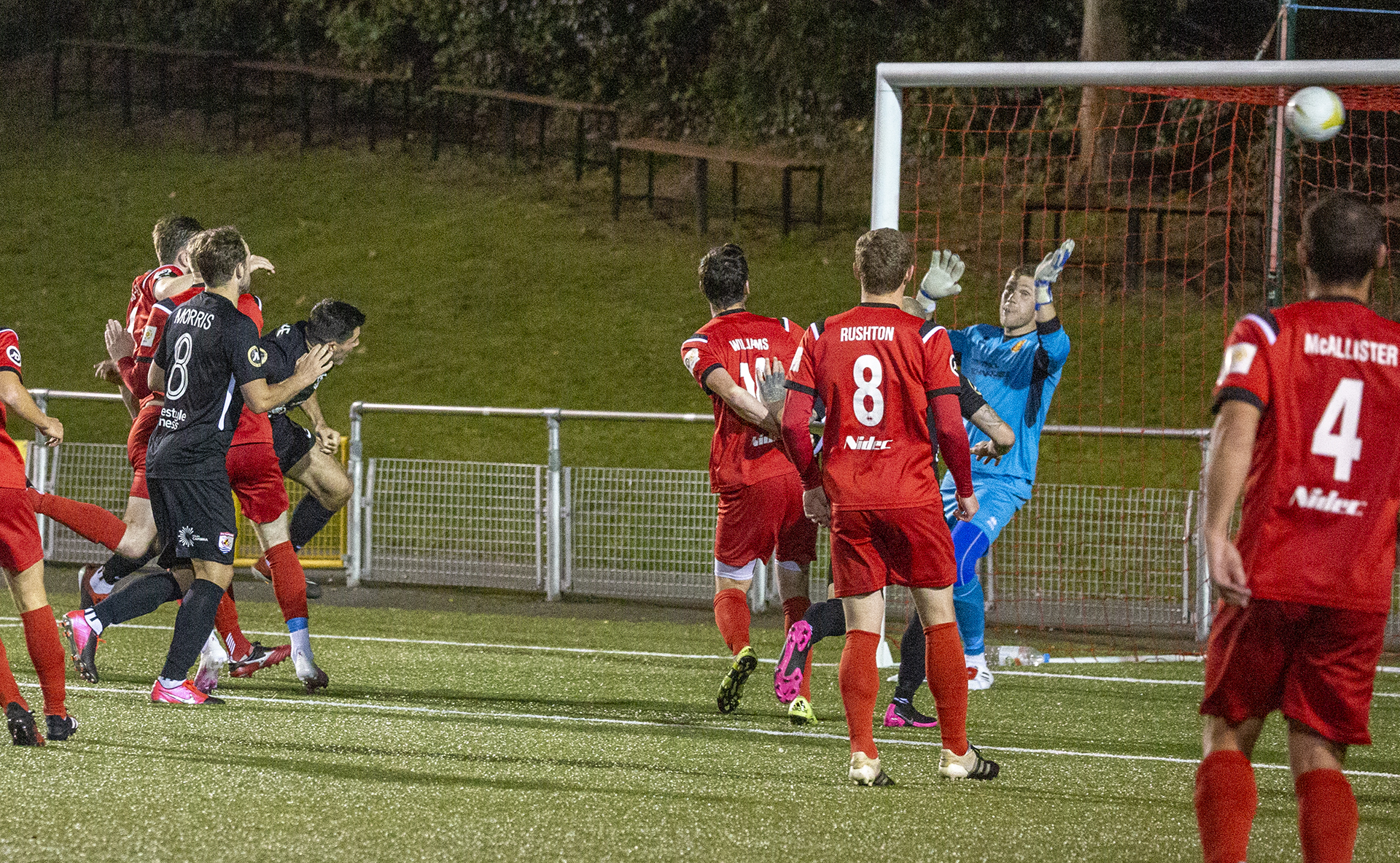 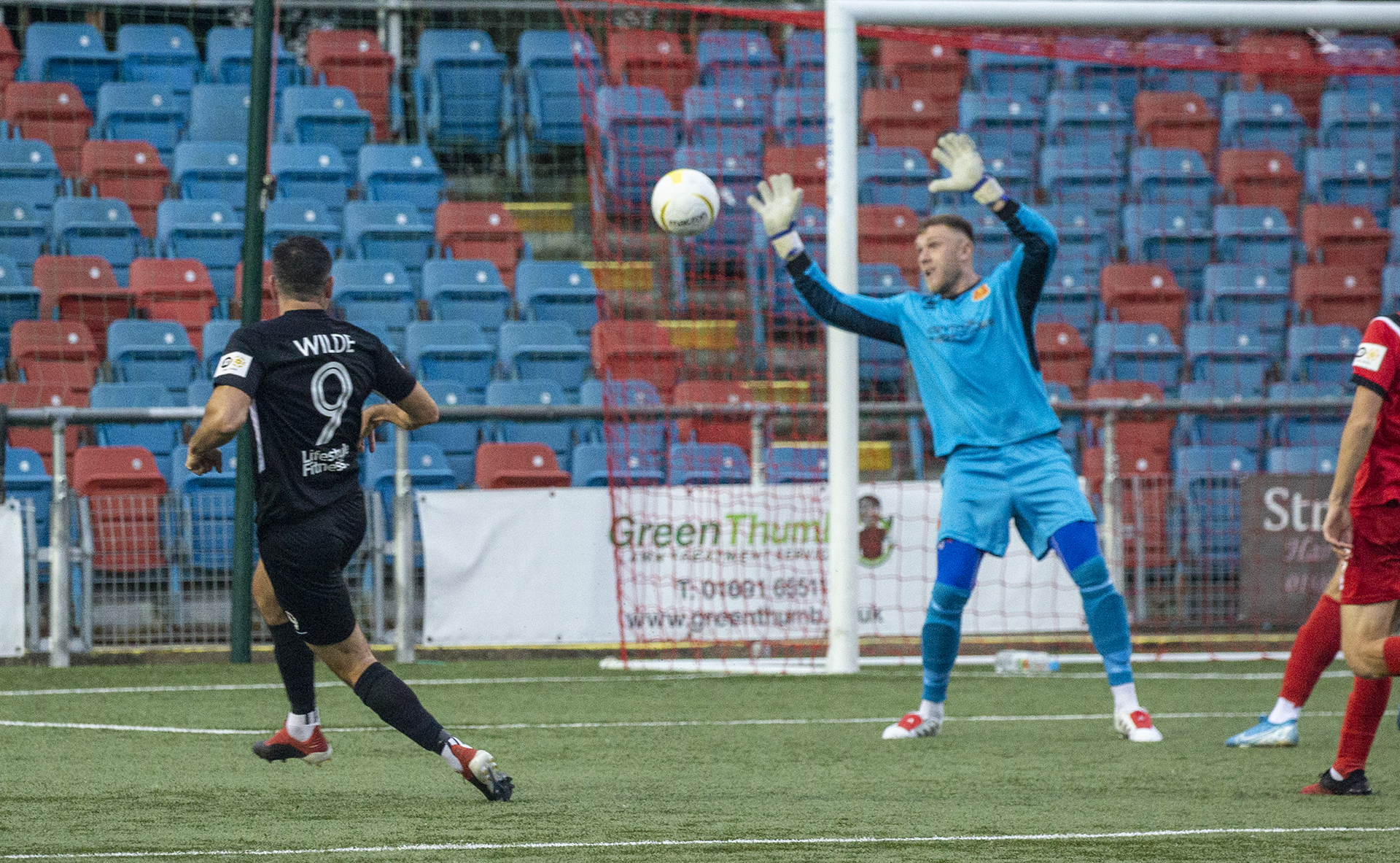 Mike Wilde is denied in the second minute | © NCM Media 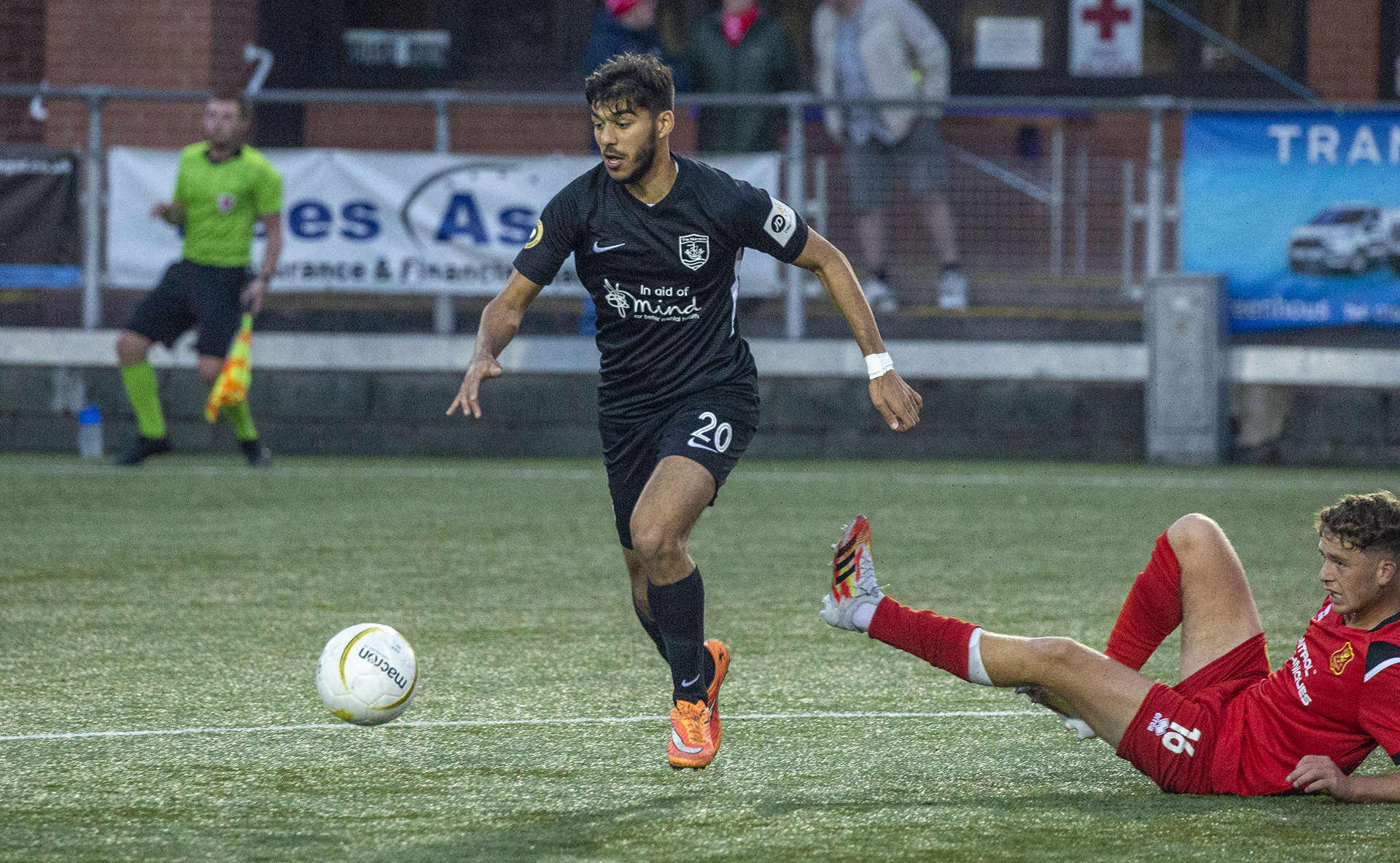 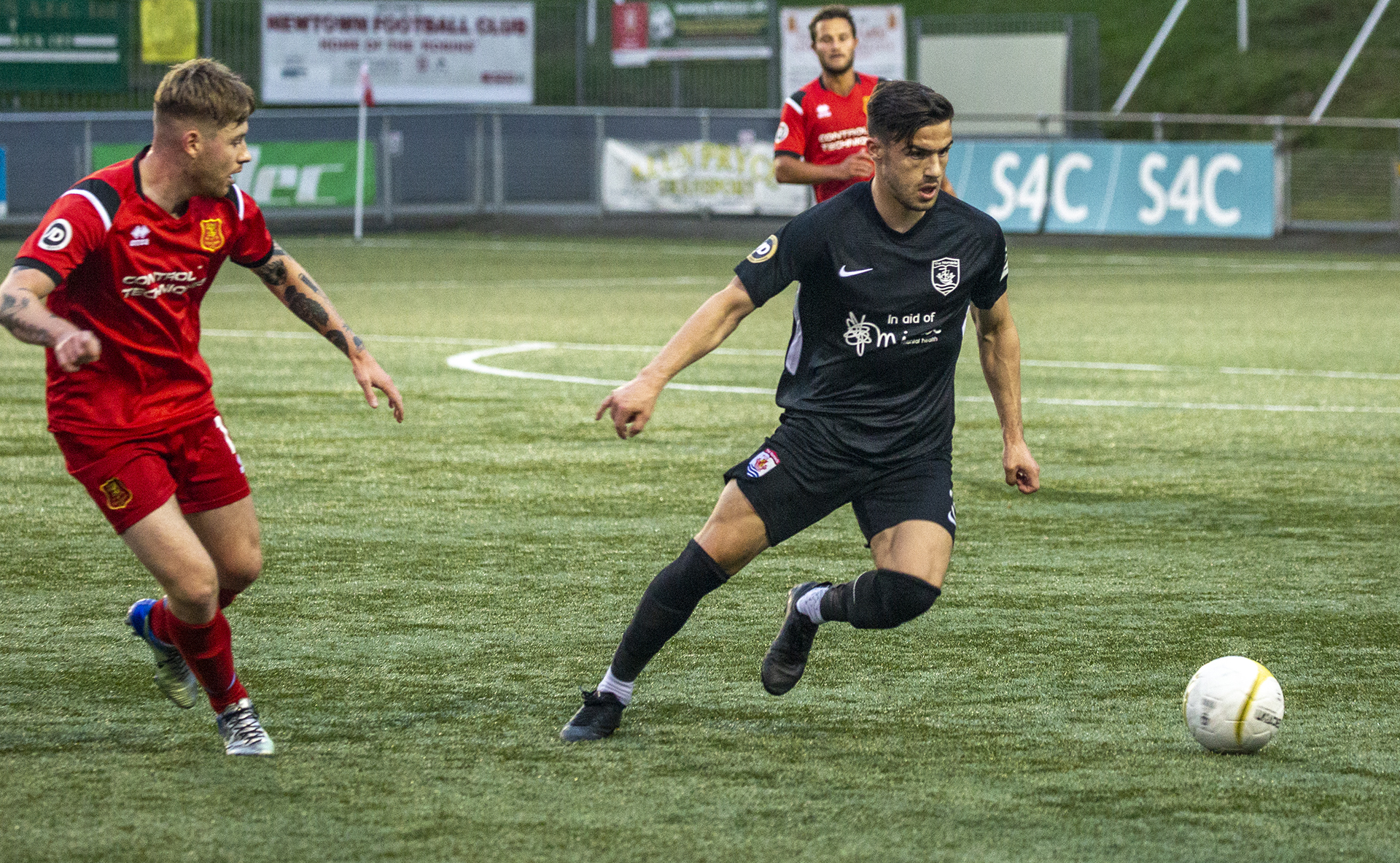 Callum Roberts in action against his former side | © NCM Media