Gary O'Toole netted a brace to hand Gap Connah's Quay Nomads all the points in a fiercely-contested derby clash against Flint Town United at the Deeside Stadium last night.

O'Toole opened the scoring inside ten minutes, and then rounded off proceedings within two minutes of the restart in a six-goal thriller, which Nomads claimed 4-2.

Boss Mark McGregor made two changes to the side that defeated Buckley Town at Globe Way seven days previously, with Craig Jones and Mike Hayes replacing Danny Forde and Chris Herbert, who both dropped to the bench.

And in the first 'traditional' derby for 12 long years, it was Nomads who drew first blood in what proved to be a thoroughly entertaining opening 45 minutes.

In front of a bumper crowd of 309 under the Deeside Stadium lights, the home side took an early lead when Mike Hayes charged into the area down the right side, held off the attentions of a visiting defender, and squared a pass to strike-partner O'Toole who collided with Andy Hughes in the Flint goal but got the vital touch to send the ball trickling over the line from 12 yards out.

The early lead gave Nomads the initiative but they wasted countless chances to extend their advantage - all inside the first 20 minutes.

First, Hayes latched on to a long high ball from deep and, in a similar goalkeeping collision that led to O'Toole's strike, managed to poke the ball beyond Hughes from the edge of the box, but a Flint defender hurried goalwards to clear off the line.

Worst was to come for Nomads, this time Hayes again turning provider to play in O'Toole, who rounded Hughes on the left side of the area but, with the goal gaping, slotted into the side-netting.

A glaring miss that was to prove costly within five minutes, when Flint were awarded a free kick on the edge of Terry McCormick's penalty area in the 24th minute.

Up stepped former Nomad Jon Kenworthy to despatch a delightful curling effort around the wall and inside McCormick's left-hand post.

Within three minutes, Flint were ahead when striker Simon Thelwell found space in a crowded area to slot into the bottom far corner with McCormick well beaten.

From what should almost certainly have been a 3-0 cushion, Nomads were trailing 1-2 by the half hour mark.

But, as they showed time and time again during the latter stages of last season's doomed Welsh Premier League campaign, the home side offered fight to drag themselves back into proceedings - and were amazingly 3-2 ahead at half time thanks to a quick-fire double salvo.

First, left wing-back Ben Collins, who provided a hugh threat down that flank throughout the first 45 minutes, found space to meet Alan Hooley's through ball and lashed a thumping drive into the far corner to level the scores on 37 minutes for his second goal of the season.

Just two minutes later, towering Andy Alston met a Stuart Scheuber free kick to crash a header in that handed Nomads the lead for the second time of the half, completing a stunning comeback.

With five goals and plenty of goalmouth action for the big derby crowd to get their teeth into at the break, the second half was always going to struggle to live up to the first.

But within two minutes of the restart, O'Toole met Collins' cross from the left and prodded in his second goal of the game to make it 4-2 and effectively kill off the tie.

The second half soon petered out, with the home side virtually having wrapped up the points and the Silkmen left chasing a game that looked increasingly out of their reach.

Danny Forde, Chris Herbert and Sam McNutt made appearances as Hooley, Hayes and Scheuber were withdrawn, whilst Flint threw on Joe Burke and Kevin Leech in an attempt to create some much-needed attacking spark.

Alas, McCormick looked untroubled save for one or two long range efforts that flashed wide, and Nomads held on to maintain their 100% start to the campaign and to take the bragging rights on the Dee Estuary for at least three months. 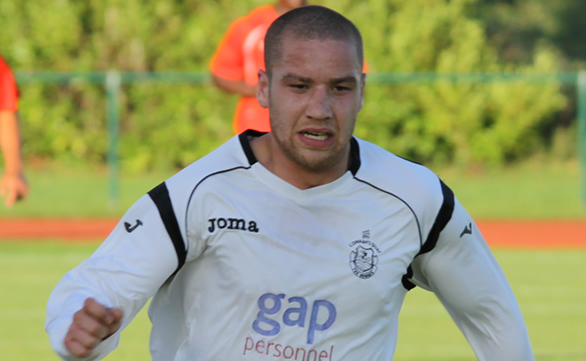