The Nomads cemented their place the Dafabet Welsh Premier League race for European football with a 2-1 victory at MBi Llandudno.

The hosts opened scoring via Mike Williams in the 20th minute, with The Nomads completing a dramatic comeback thanks to an own goal and Nathan Woolfe scoring in the 40th and 43rd minute respectively.

The Nomads’ manager, Andy Morrison, called the game a ‘cup final’ in the build-up to the match, with The Nomads in fourth and Llandudno in third, meeting for a six pointer.

The Nomads needed a win to keep their hopes of reaching third in the league, whilst Llandudno knew victory would greatly stabilise their position in the Dafabet Welsh Premier league.  Both teams had reasons to be confident, with The Nomads coming off the back of a home win over TNS, whilst MBi Llandudno had not lost in their last six games.

Late changes to the side saw Chris Rimmer start in the Nomads’ line up, replacing the absent George Horan, while John Disney made his debut in place of Danny Harrison, who was suspended after receiving a red card against The New Saints.

The game began and both teams were forced to adapt to the wet and windy conditions.  The home side attacked first via James Joyce, who was brought down by Wes Baynes.  The tackle resulted in a free kick just outside The Nomads’ area, but Liam Dawson’s free kick could only hit the Les Davies in the wall.

The Nomads also pressured the Llandudno end with a number of throw-ins deep in the home half.  Les Davies ran onto a loose ball just outside the home area in the seventh minute, but keeper Dave Roberts collected it.

Jamie Crowther had a good chance to score from six yards when 'keeper Roberts spilled the ball trying to catch a cross into his area from a corner, but The Nomads' midfielder sliced his effort wide.

Llandudno then broke the deadlock with a Mike Williams goal in the 20th minute.  From a Liam Dawson free kick around 30 yards out, the ball floated into The Nomads' area where Williams stretched to edge the ball past Danby and send his side 1-0 up.

The Nomads, who had enjoyed an even game up until Llandudno’s goal, went in search of an equaliser and came close when Callum Morris’ header was cleared from the goal line, the first of a number of goal line clearances that afternoon.

The equaliser was then found on 40 minutes, when Ashley Ruane rose to head a Les Davies cross goalwards - Ruane's header hit the upright and deflected off 'keeper Roberts into the goal, with the scorer confirmed as a Dave Roberts own goal.

The Nomads did not stop there however, and managed to take the lead with two goals in three minutes, when Woolfe converted a Nomads corner to complete a turnaround in the 43rd minute.

From a Wes Baynes corner, Les Davies sent a shot goalwards where a goalmouth scramble ensued - Roberts was unable to hold onto the ball and Woolfe was on the scene to strike low into the net and give The Nomads the lead going in to half time.

The Nomads had another goal scoring opportunity after the interval in the 49th minute, when Ashley Ruane had a shot from around six yards cleared off the line by Shaw having already beaten 'keeper Roberts.  Llandudno kept the pressure on The Nomads’ end, seen when following Ruane’s chance a Llandudno effort sailed just wide of Danby’s goal.

As the game went on, The Nomads were forced to soak up more and more attacks from Llandudno, seen when Smith made a goal line clearance to deny a home equaliser.

The Nomads hoped they could find some breathing space when they were awarded a free kick just outside Llandudno’s area, but Woolfe sent the shot just over the crossbar.  A change upfront saw Ruane replaced by Nick Rushton.  Woolfe again had a chance when he tested the 'keeper from 15 yards with a low strike, but Roberts saved comfortably.

The home crowd thought Llandudno had found their much needed equaliser when the ball was in Danby’s net, but the goal was ruled out due to a foul on The Nomads’ goalkeeper.

With tension rising at Parc Maesdu, The Nomads missed their chance to end the game comfortably with Rushton and Morris sending efforts wide of Llandudno’s goal.  The real drama came in the 89th minute when Lewis Buckley sent a great effort towards The Nomads’ goal, where Sean Smith pulled off some heroic defending with yet another goal line clearance.

Following this and a substitution seeing McIntyre replace Woolfe, referee Richard Harrington blew his whistle for full time to confirm an impressive and important win for gap Connah’s Quay.

The victory maintains The Nomads’ position of fourth in the Dafabet Welsh Premier League and takes them just three points off third place.  Their next game is in the JD Welsh Cup semi finals, where they face The New Saints at Latham Park in a 5:15pm kick off.

To book onto our official supporters coach for this game, contact will.catterall@the-nomads.co.uk. 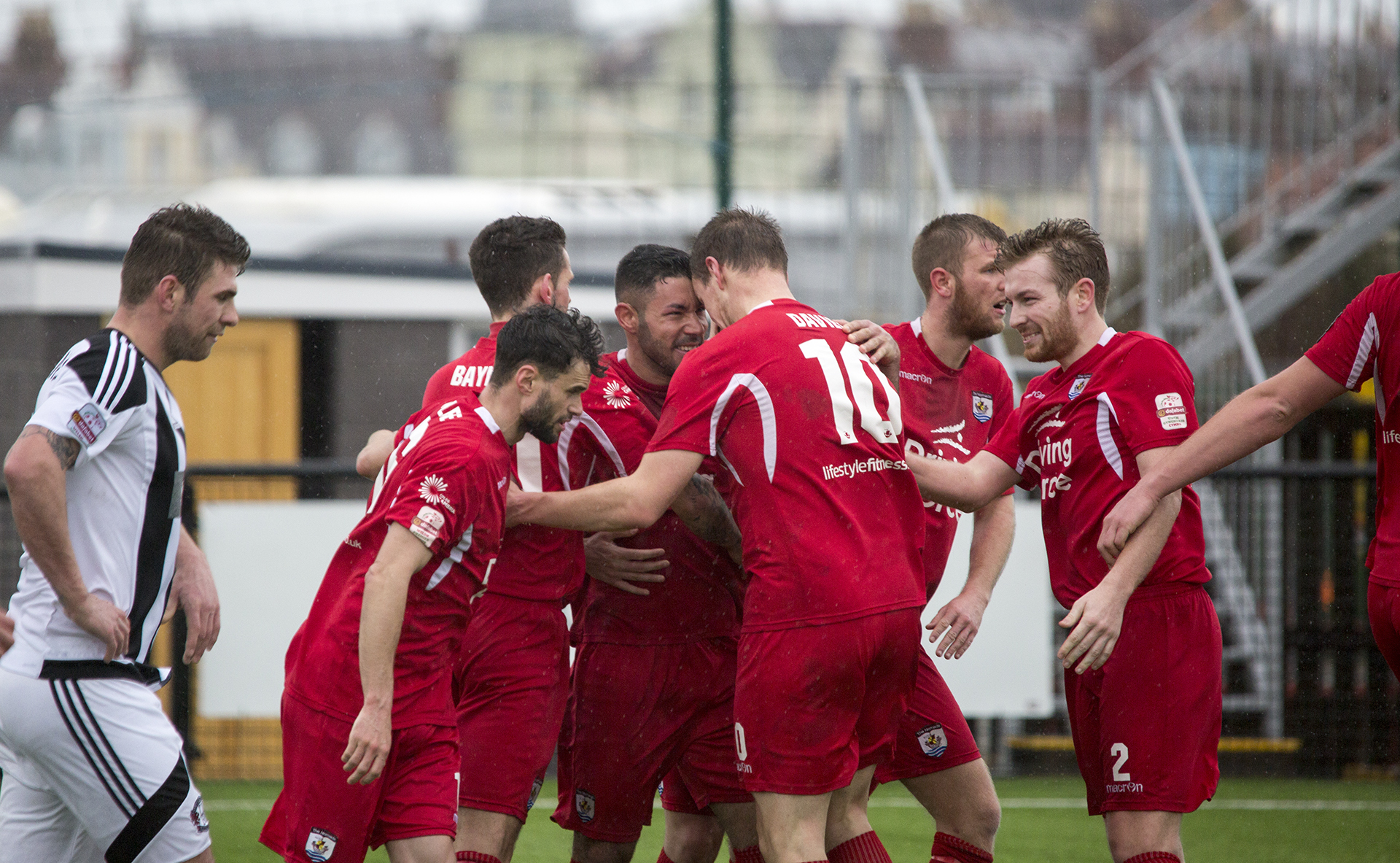 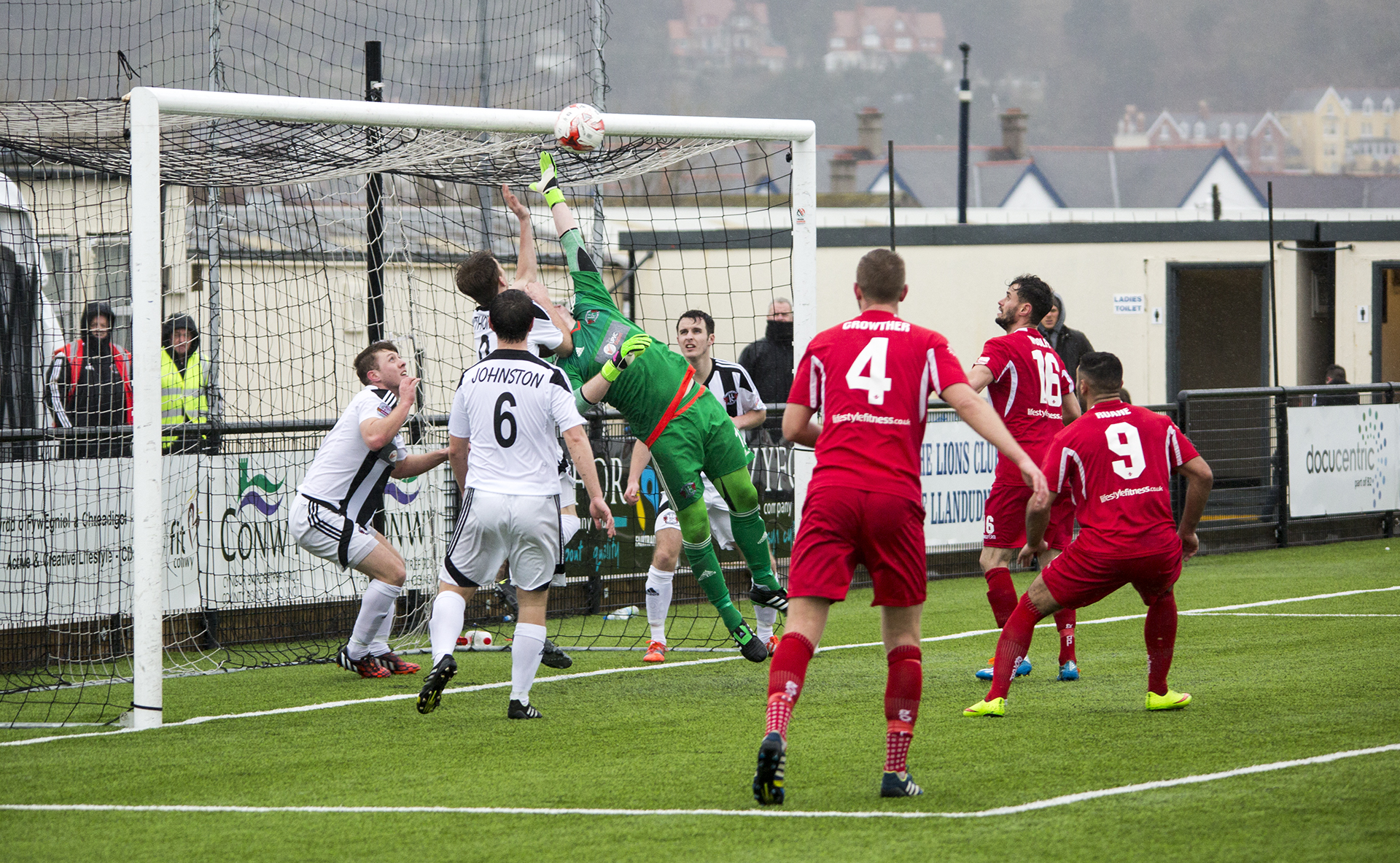 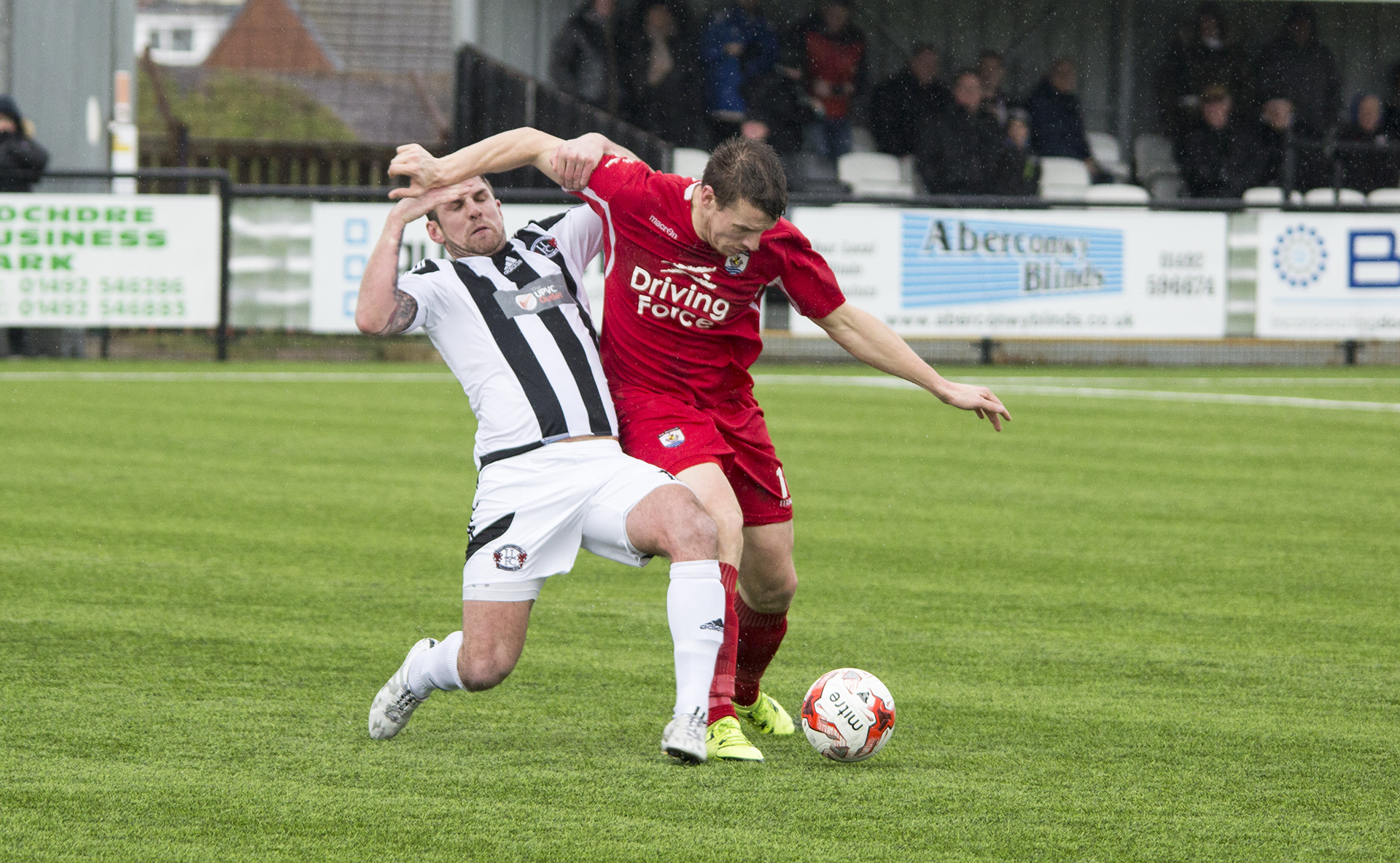 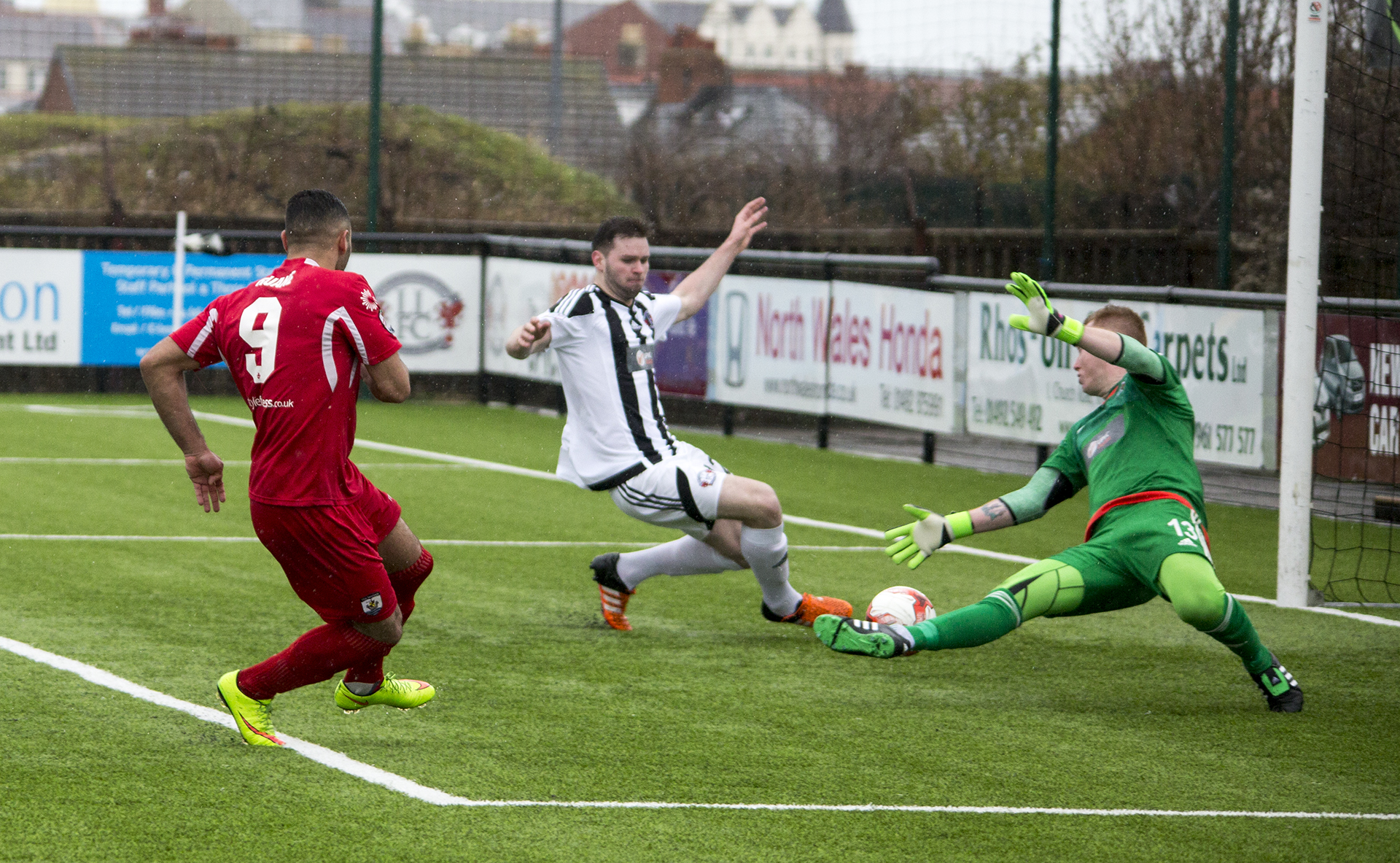 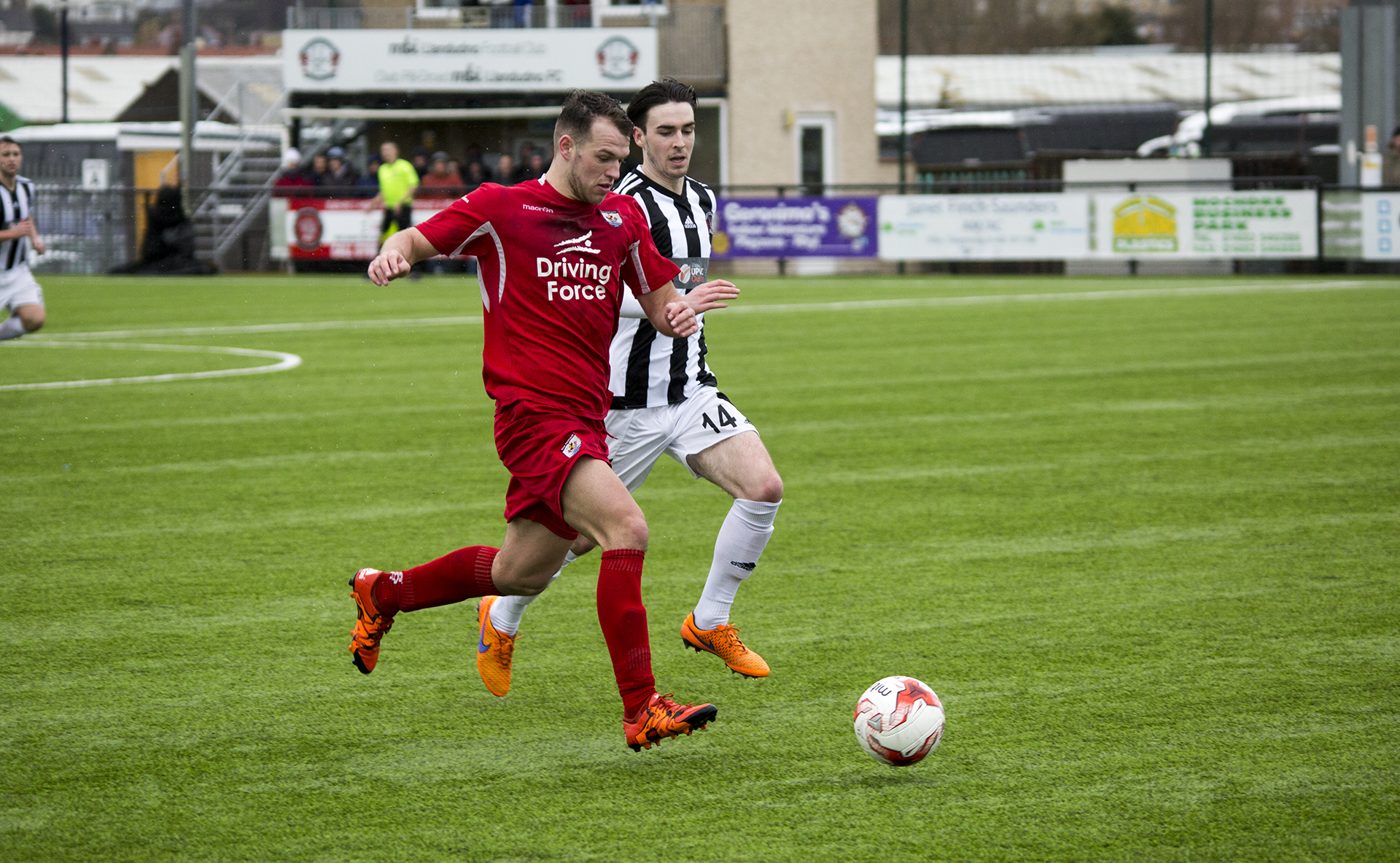