Simon Thelwell scored either side of half time, following an early John Hill strike, to consign ten-man Nomads to their first loss of the campaign as Flint Town United claimed the early season Deeside bragging rights.

After netting a feast of 15 goals in their opening two outings, Mark McGregor's men were sent crashing back down to earth by an evidently more determined Flint outfit who bounced back from a six-goal drubbing at the hands of Rhyl at the weekend to punish the champions for a lacklustre display.

The Silkmen enjoyed arguably the easiest three points they will claim all season on their way to a first win of the campaign and a first 'derby' success since 1996/97, with the second half dismissal of star striker Gary O'Toole, for two bookable offences, heaping further misery on a disappointed home crowd.

Shaun Roscoe for Rob Jones was the only change from the Nomads' side that romped to a 9-1 victory over Penycae on Saturday. Having started slowly in each of their previous games, the Quay were keen to get off on the right foot but Flint had similar ideas. In the first minute Shaun Beck, returning from a one match suspension, cracked a half-volley just over Mackin's bar and, after O'Toole had fired into the side netting, Flint went straight down field and took the lead. John Hill was the scorer crashing the ball home from close range after Mark McGregor had blocked Phil Lloyd's shot from outside the box.

Lloyd and Hill combined once again in the 18th minute only for the latter to head narrowly wide of the post. Flint were now calling the tune and Beck blazed over under pressure following a good run by Mike Banks. Then, after Gary O'Toole had been cautioned for a late sliding tackle on Banks, Flint deservedly doubled their lead on 25 minutes through Simon Thelwell. Again Banks was given time and space to send a measured right wing cross into Nomads' penalty area and the tall striker headed powerfully past Mackin.

Gradually the home team began to threaten and won two left-wing corners which came to nothing. O'Toole was fortunate not to receive a second yellow card for a tackle from behind on Hill as his frustration increased. As half-time approached James McIntosh slipped when attempting to convert Danny Forde's lofted pass before arriving in the six-yard box to meet a low cross from Jamie Petrie only to see his close-range effort clear the bar.

The Quay began the second-half in determined fashion. O'Toole was through on goal but lost the ball on the edge of the area before a free-kick for a foul on McIntosh was easily dealt with by the Flint defence. In the 52nd minute a long Mackin clearance was headed on by McIntosh but as O'Toole chased the ball into the area he caught Flint 'keeper Leon Bimpson and was immediately given a second yellow card.

Rob Jones replaced Shaun Roscoe as Nomads were forced to reorganise. On 58 minutes a right-wing corner fell to Petrie but his first time shot was punched clear by Bimpson low down to his left. Mark McGregor pushed upfield in a vain attempt to rescue something from the game but his absence from the back four allowed Beck and Thelwell further opportunities. A 65th minute drive by Thelwell was palmed down by Mackin, the ball bouncing up to strike the crossbar as Nomads breathed another sigh of relief.

Substitute Rob Jones was having an impact on the game in midfield and for a while Flint were on the back foot as Jones began to control the midfield almost single-handed. That said, the Silkmen were content to sit back on their comfortable lead knowing that they could break forward virtually at will.

McGregor's presence in the Flint area almost led to the arrears being reduced when he headed the ball down to the feet of McIntosh but the striker could only hit a tame effort into Bimpson's arms. Then, in the 75th minute, any lingering thoughts of a Nomads comeback were dashed when Phil Lloyd pulled the ball back for Thelwell to strike his second goal of the evening. There was still time for Ben Alston to make a last ditch tackle to prevent a fourth goal and for Beck to stroll through a ragged defence before firing over the bar.

This was a salutary lesson for the champions. Flint were determined not to suffer the same sort of drubbing they took at Rhyl on Friday night and caught Nomads off guard. Without O'Toole at Llandudno on Friday, the champs will have to regroup in order not to experience another 90 minutes like this. 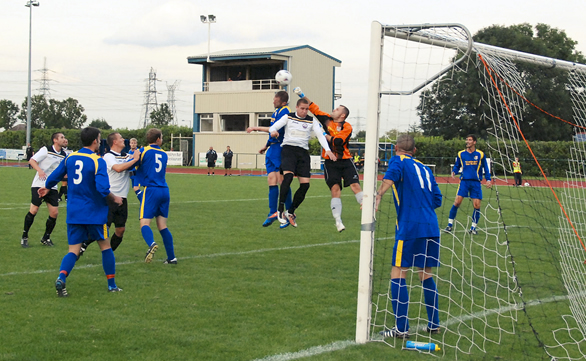