Connah's Quay Nomads booked their place in the Irn Bru Cup quarter finals on Saturday evening with a 2-0 win over NIFL Premiership side Coleraine.

George Horan opened the scoring for Nomads on 61 minutes, with Andy Owens sealing victory with a 93rd minute strike.


The live Sgorio game was a historic occasion at Deeside, marking their first ever Irn Bru Cup game at Deeside against a senior side from overseas.

Coleraine beat Fortmartine on penalties to progress to the third round, whilst Nomads had secured a shock 1-0 win away at Scottish Championship side Falkirk. Nomads came into the game full of confidence, boasting four games unbeaten in the JD Welsh Premier League with consecutive victories over Newtown, Carmarthen, Llandudno, and Cardiff Met. The Bannsiders meanwhile travelled across the Irish Sea fifth in their league standings, having been beaten 4-1 by Glenavon in their last outing.

Andy Morrison made one change to his line up from Nomads' 3-1 win away at Cardiff Met, as George Horan returned to the starting eleven to captain the side.

The game began as Storm Callum came down on the Deeside Stadium, with a strong following from Coleraine making for a decent atmosphere throughout.

In the fourth minute Coleraine were nearly gifted an attempt on goal, with a stray pass from the Nomads defence nearly falling into their path before Callum Morris did enough to clear for a throw in.

With seven minutes played, Northern Irishman and Nomad John Disney sent a long range effort on goal which was spilled by keeper goalkeeper Chris Johns, with Michael Wilde being found offside as he looked to pounce from seven yards out.

Coleraine began to consistently attack Nomads with effective movements down the wing, winning a number of set pieces, but the Connah's Quay defence did enough to keep the visitors at bay.

Coleraine kept coming at Nomads, with Adam Mullan going toe to toe with Danny Holmes on the right wing, with Holmes winning a throw in to regain possession for the Nomads who were working hard to get time on the ball.

The Northern Irish side appealed for a penalty after a Declan Poole challenge in their area with 30 minutes played, but they were instead awarded a corner kick. Although Coleraine were enjoying a good amount of possession, Nomads continued to create flashes of attacks in the Bannsiders' area.

On 39 minutes, a John Disney free kick floated into the away area, where Michael Wilde sent a seven yard effort towards goal which was saved.

Just two minutes later Coleraine saw a good opportunity to score go amiss, when a mis-hit clearance from Callum Morris inside the Nomads' area fell to Aaron Burns, who sent an effort over the goal despite being clear by the left post.

At half time Nomads went in knowing they had a big challenge ahead of them in the second half as they looked to break down a strong Coleraine outfit. To help them achieve this, Andy Morrison brought on Craig Jones and Laurence Wilson who replaced Declan Poole and Michael Wilde.

The second half started with a lower tempo to the first, but the atmosphere would soon heighten for the crowd of 624 at Deeside. In the 55th minute Coleraine were awarded a free kick from around 30 yards out, with Burns' long range effort punched away by Nomads' keeper Jon Rushton.

With 59 minutes played, Andy Owens nearly got on the end of long ball from Rushton, with the effort collected by Johns in goal.

But on the hour mark, Nomads finally broke the deadlock with a textbook set piece. Andy Owens sent a long throw in into the Coleraine area, which was headed in by George Horan who rose highest in the Bannsiders' box.

Nomads' fortunes continued to flourish, with Coleraine reduced to ten men just two minutes after the opener after Stephen Lowry was shown a second yellow card for a tackle on Ryan Wignall.

In the 64th minute George Horan went close to brace, once again connecting with a header in the Coleraine area which rattled the crossbar.

Coleraine were dealt a blow in the 68th minute, when captain O'Donnell was shown a straight red card for a challenge on Andy Owens who was making a run at the Coleraine goal.

The nine-men Bannsiders battled on, but Nomads were now in control and looking to confirm their place in the quarter finals.

On 79 minutes Ryan Wignall did well to dribble into the Coleraine area, setting up Andy Owens who dragged a shot just wide.

Inside the last ten on 84 minutes, Aaron Burns took a free card 20 yards from the Nomads goal, whipping his effort just wide.

Nomads final substitution came late in the game and saw Michael Bakare come on in place of Wignall.

Bakare's presence was made clear when he got on the ball and kept it in the Coleraine area, holding off two defenders as the clock ran down in the 89th minute.

Nomads had to stay alert with a minimum of three additional minutes added on by the fourth official, but it Andy Owens then sealed the victory with a late strike.

Michael Bakare went on a run down the left wing, beating his man and sending a square ball to Andy Owens who hit the target at close range in the 93rd minute. The goal confirmed a historic win for Nomads, which puts them into the quarter finals of the Irn Bru Cup where they can face the likes of Bohemians, Ross County and Queens Park.

The draw for the last eight of the Irn Bru Cup will be made on Tuesday 16 October at 1pm. That night, the Nomads face Cefn Druids for a 19:45pm kick off as they return to JD Welsh Premier League action. 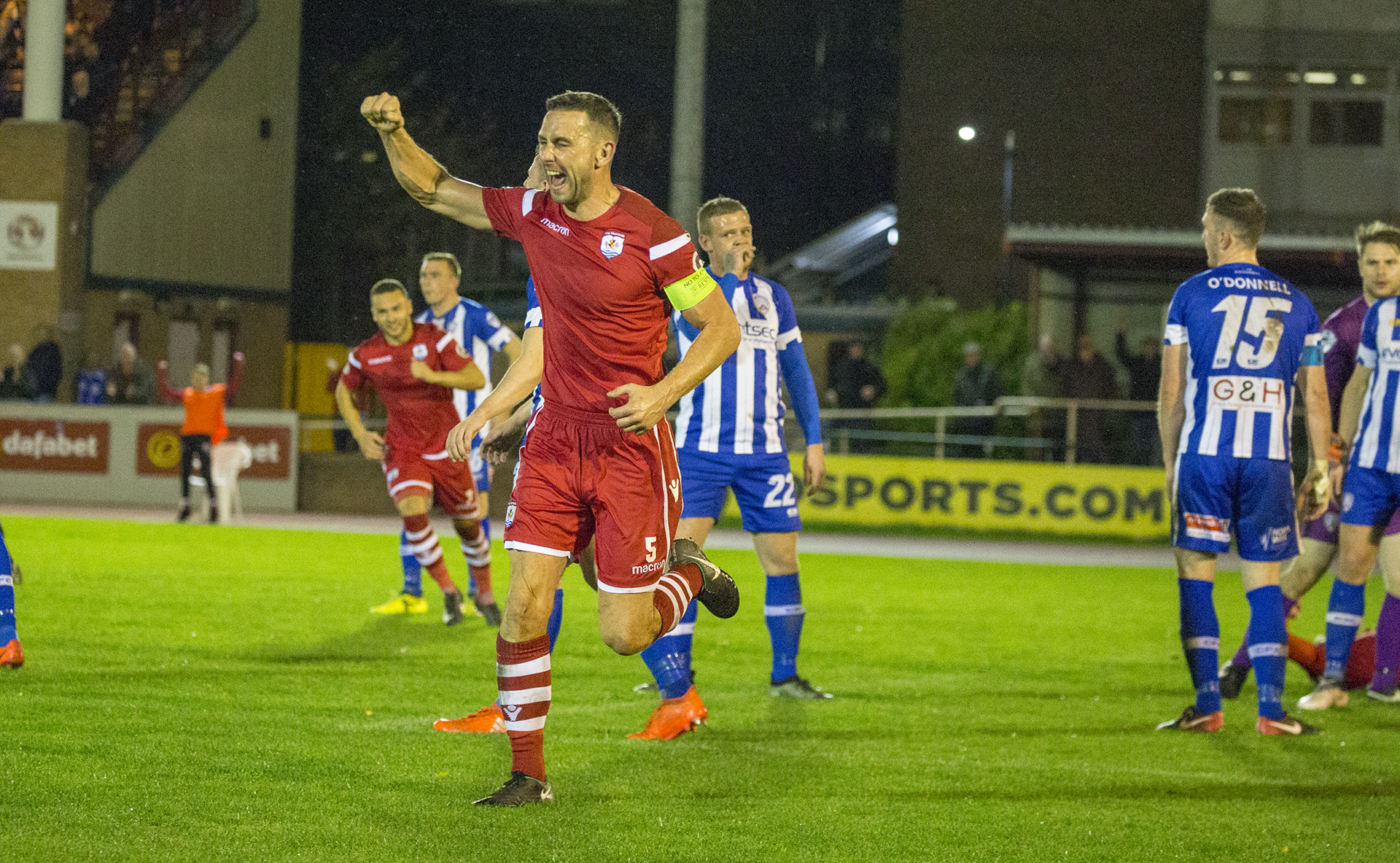