Connah's Quay Nomads lost out by three goals to one against Ross County in the Irn Bru Cup final in Inverness on Saturday evening.

A Michael Bakare goal gave Nomads the lead, but three second half goals from Ross County saw the Scotsmen lift the cup.

The game was billed as a historic fixture for the club and Welsh Football, as it marked the first time a Welsh club would play in an Irn Bru Cup final.

The occasion saw Nomads travel 400 miles from Deeside to meet Scottish Championship leaders Ross County at Inverness Caledonian Thistle's Caledonian Stadium, with a vocal group of more than 100 supporters from Deeside cheering them on and the game broadcast live on S4C, BBC Alba, and BT Sport.

The final commenced in front of a 3,057 strong crowd, with Nomads targeting the Ross County end with Andy Owens' trademark long throw ins, the first of which was cleared by the Staggies in the 7th minute.

Ross County's pacy attacker Michael Gardyne ran down the left wing in the 8th, and went close to the Nomads byline, where the ball eventually rolled out for the safety of a goal kick.

Gardyne again threatened in the 14th minute with Priestley Farquharson scuppering his cross, before Andy Owens put pressure on County stopper Ross Munro as he tried to control an aerial ball in the opposition's area.

In the 17th and 18th minutes, a total of three Andy Owens throws went into the County area with the likes of George Horan and Adam Barton battling to get a head on them as Nomads eyed an early lead.

And in the 21st minute, they achieved just that when Michael Bakare went on a run at goal, and sent a powerful driving shot into the top left corner of the goal from 18 yards out.

Boosted by their goal, they had a golden chance to make it 2-0 just two minutes later, when a Bakare corner fell to Horan, who from around eight yards out in front of goal sent an effort over.

With 30 minutes played Nomads were the team on top, with John Danby going unchallenged in his goal as Connah's Quay looked to capitalise on their momentum.

In the 33rd a Nomads free kick was headed towards goal by Wilde, and two minutes later, a mistake from goalkeeper Munro saw him pass the ball straight to Andy Owens, who shot at goal from 10 yards out only to see Munro save to spare his blushes.

As half time neared, Nomads were continuing to hold their own against a strong County outfit, with Adam Barton winning two important headers in his own half in the 42nd minute.

With 45 played an additional one minute was awarded by the fourth official, and Nomads nearly doubled their lead with the last kick of the half when a corner kick from Michael Bakare hit the County crossbar.

Nomads went in at half time with a 1-0 lead, but were aware their lead could have been by more after creating some great opportunities with an impressive second half performance.

After the restart Ross County made their attacking intentions clear, going close in the 48th when Ross Stewart got on the end of a high ball in the Nomads' area and rounded John Danby only to see his effort go off the post, allowing Farquharson clear.

And County kept the pressure on, winning a free kick in the 52nd minute which was nearly sent goalwards, and then immediately winning a corner which Nomads dealt with.

The Staggies were playing much of their football in the Connah's Quay half, with their number ten, Declan McManus, having a shot blocked as they continued with their campaign for an equaliser.

The hour mark passed and Nomads were still in the lead and putting in a major defensive performance with the likes of Holmes, Horan, and Farquharson giving it their all to keep County at bay.

In the 65th minute Andy Morrison made his first change of the game, replacing Callum Morris with Declan Poole, who from the midfield helped Andy Owens attack the County end with some good passes to the Nomads' striker.

John Danby was also tested in the 65th, tipping a Ross County header over his crossbar before a run into the Nomads' area by Gardyne was intercepted by Adam Barton with 67 minutes played.

The 69th minute saw a goalmouth scramble, in which the Nomads managed to clear the ball before it fell to the awaiting Brian Graham who was preparing to shoot from just seven yards out.

As the game entered the 70th minute, Nomads were still fending off the almost constant waves of attacks from Ross County, with a John Danby pulling off an excellent save against Ross Stewart.

But five minutes later the Staggies' persistence paid off when substitute Josh Mullin found the equaliser with a low finish from the right side of the Nomads' box from seven yards out.

With the score level at 1-1 and Ross County boosted by their goal, they took the lead in the 79th with Mullin sealing a brace in just four minutes, striking from 18 yards out to give County one hand on the Irn Bru Cup with ten minutes to play.

Nomads battled valiantly throughout the last stage of the final, with Priestley Farquharson being replaced by Ryan Wignall in the 80th minute as they sought a dramatic comeback.

In the 82nd minute, they won three successive corners, with the third being swung close to the Ross County goalmouth by Michael Bakare.

But despite Nomads refusing to lie down, Ross County all but confirmed their cup victory when in the 86th minute, Jamie Lindsay sent a curling effort into the top right of the Nomads' net from around 15 yards out.

Nomads' third and final substitution saw them replace Danny Harrison with Jake Phillips, before they had a last chance at goal in the 88th minute, when Michael Parker went within six yards of the goal but couldn't get a shot away.

After three additional minutes were played, referee Alan Muir confirmed full time and Nomads were forced to settle with their runner up status at the conclusion of the 2019 Irn Bru Cup.

The game ended Nomads' Irn Bru Cup run, which had seen them go on a history making run to the final in which they had beaten Falkirk, Coleraine, Queens Park FC and Edinburgh City FC, putting Deeside and the JD Welsh Premier on the map in the process.

They now turn their attentions to the JD Welsh Cup, facing Cardiff Met FC in the semi finals next Sunday 31 March at Newtown's Latham Park for a 12:30pm kick off. 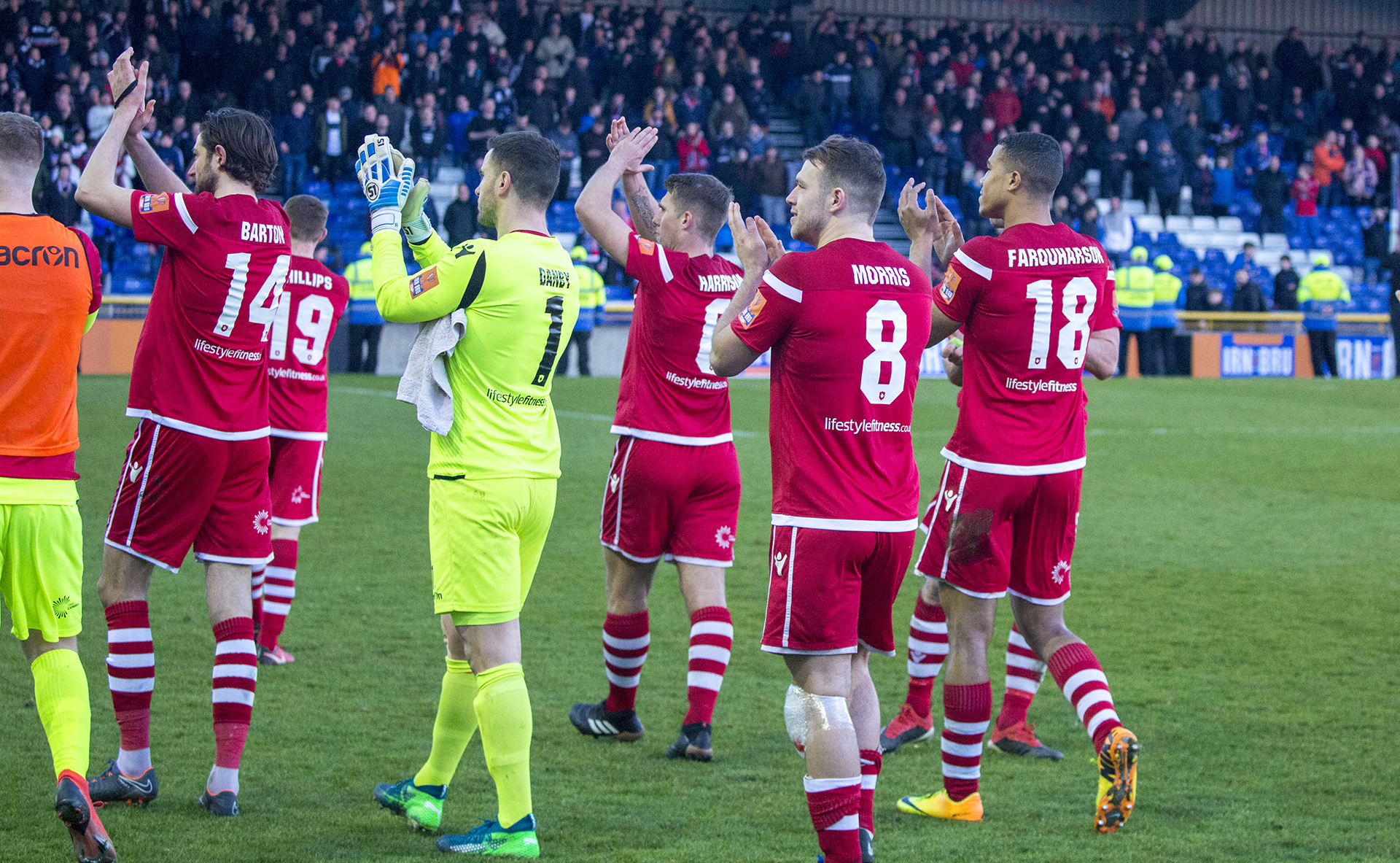 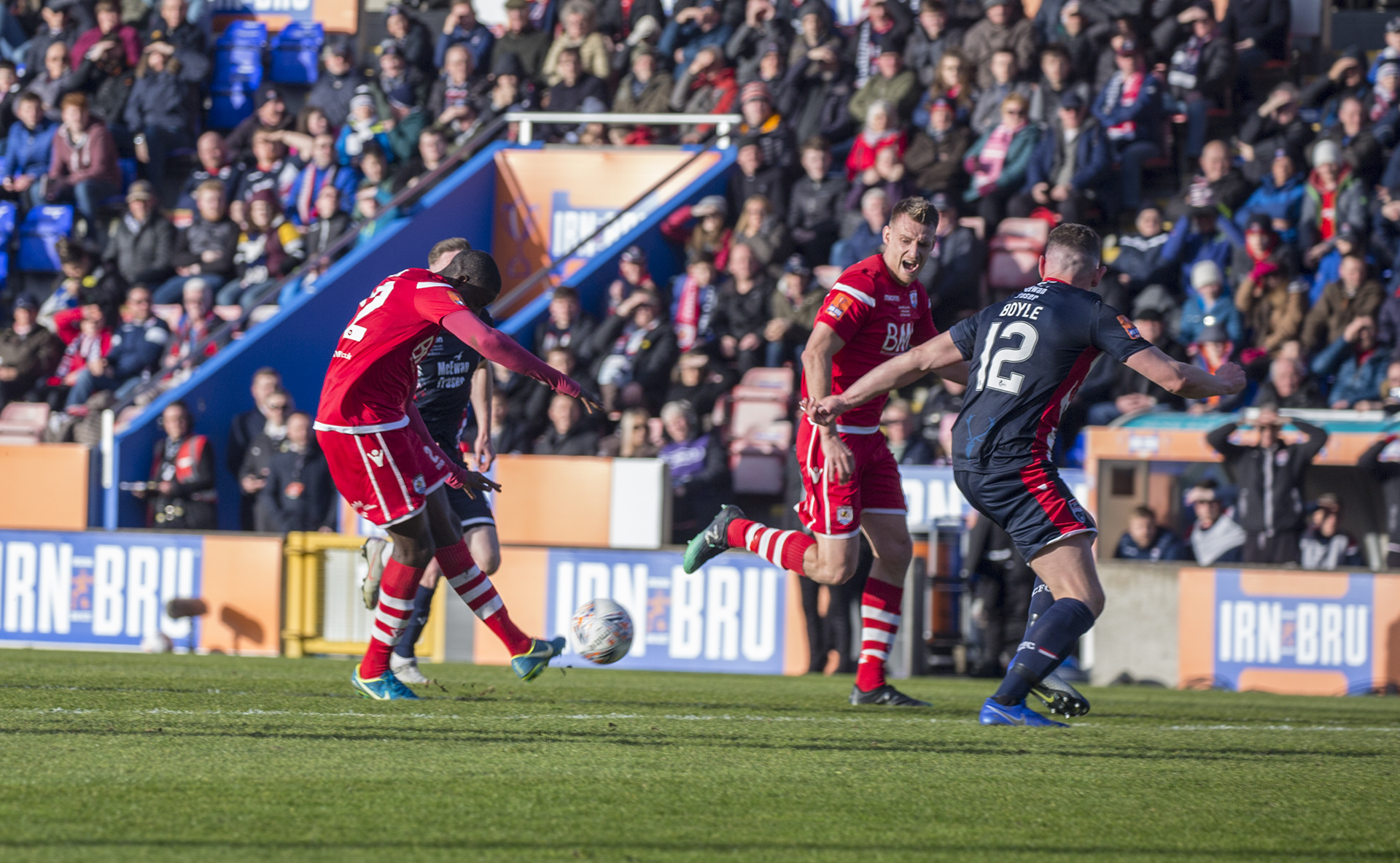 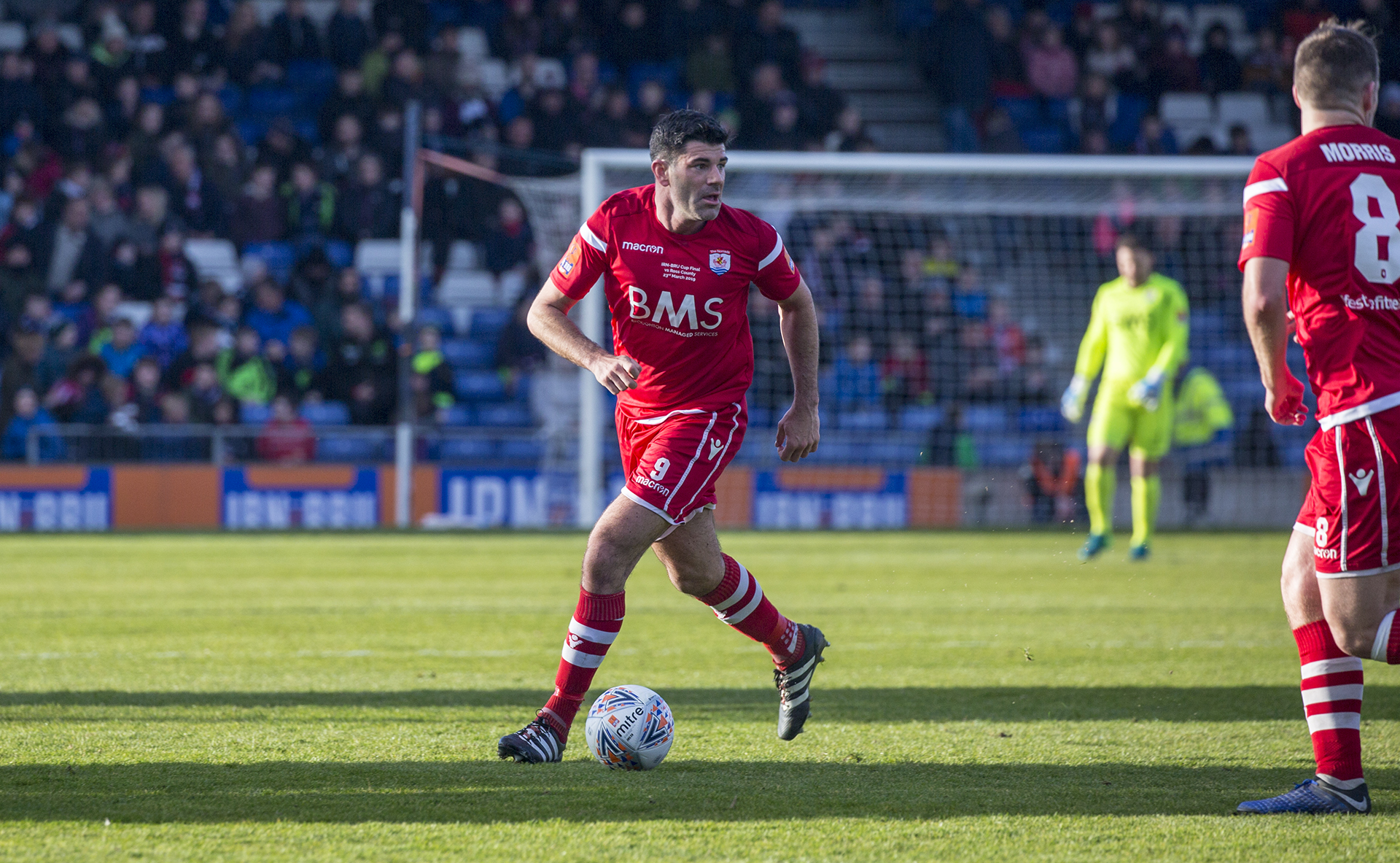 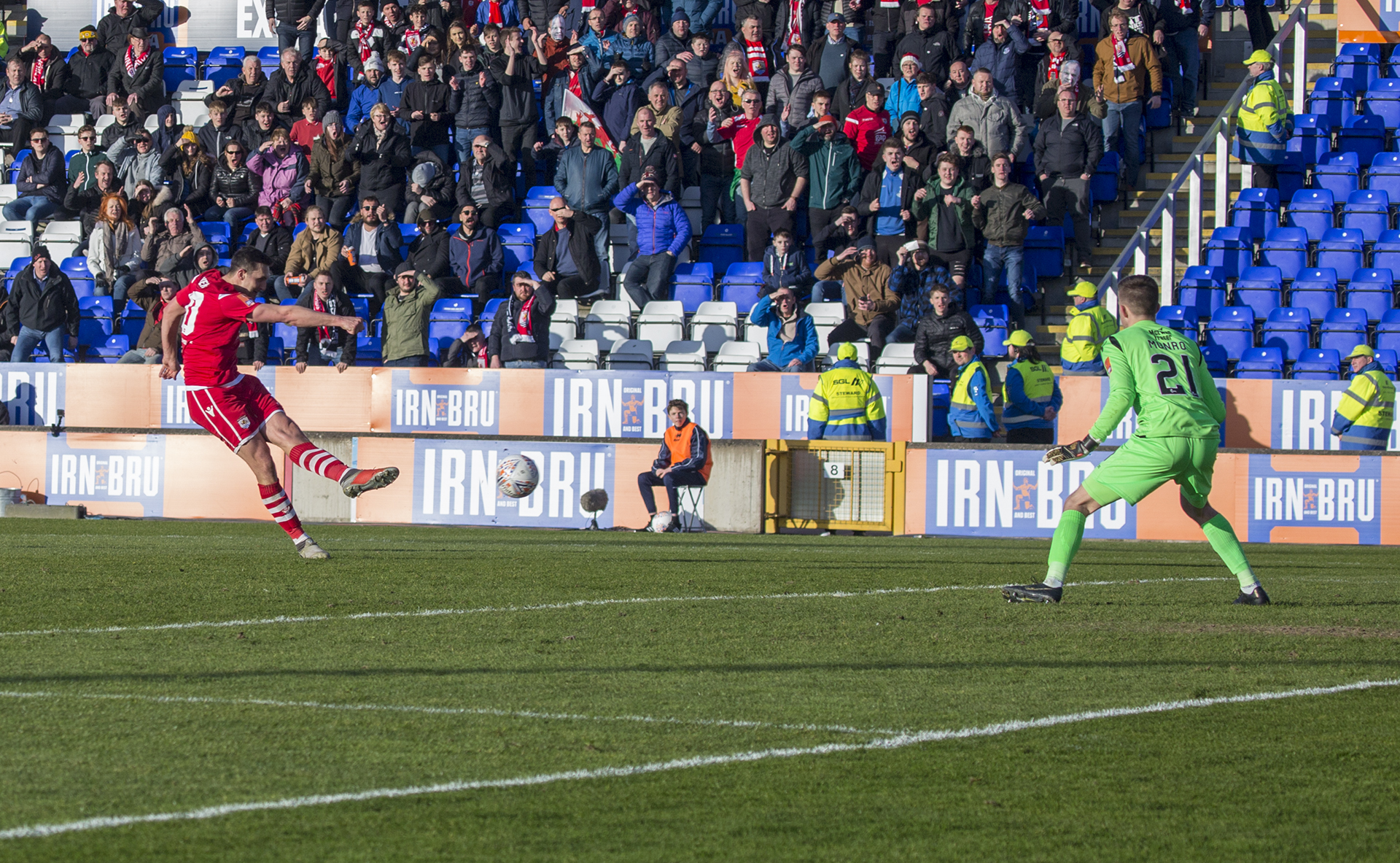 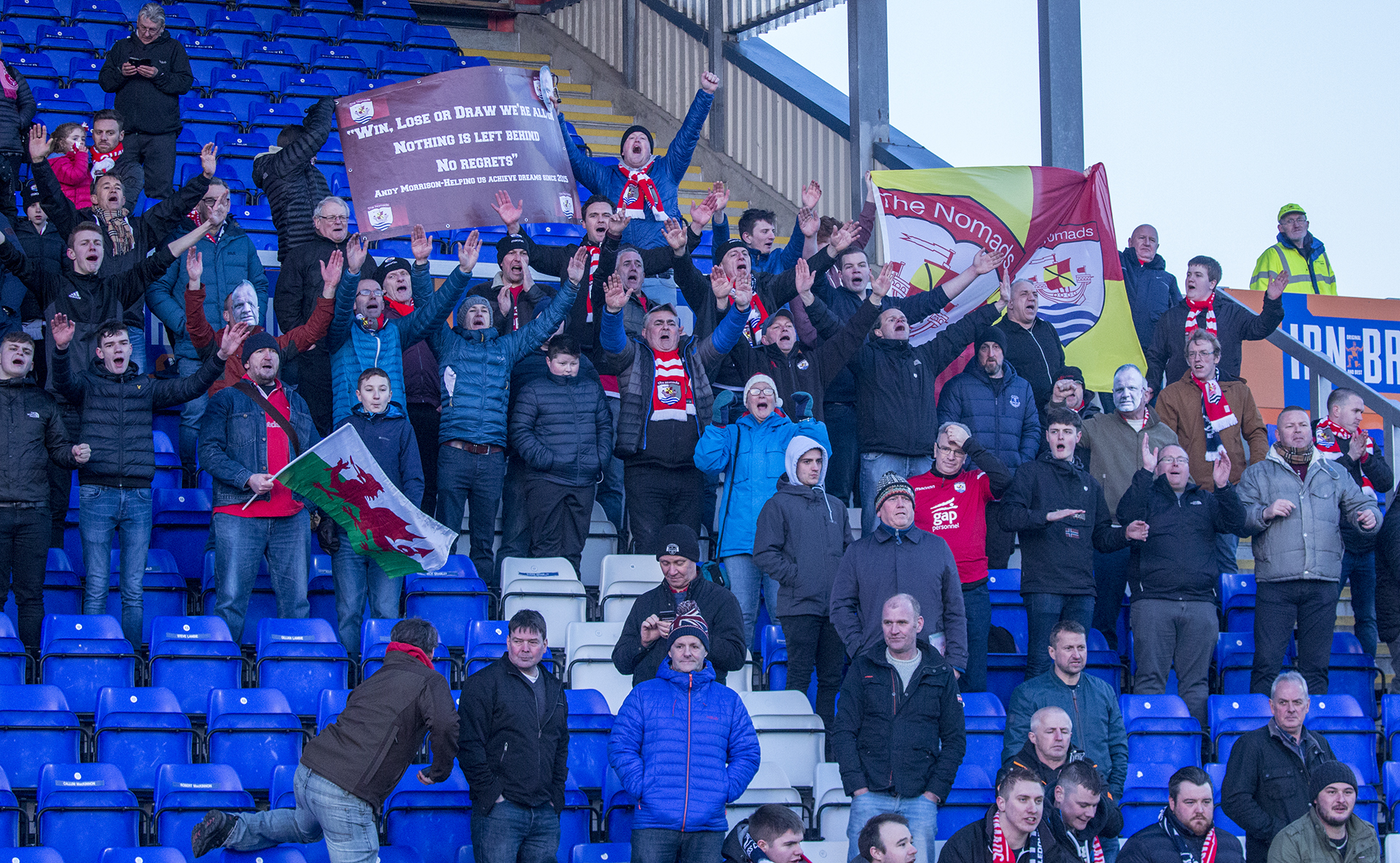